In order to find Joker's latest hideout, you will once again use the tracking device. Talia al Ghul is being held inside a theatre in the western part of Arkham City, nearby Ace Chemicals #1. You can recognize this area by the fact that it's whole monitored by snipers #2, who you will have to carefully eliminate. I'd suggest taking care of them in the order showed below, thanks to which you won't get in sight of any of them too quick. That of course doesn't mean you can approach them carelessly. 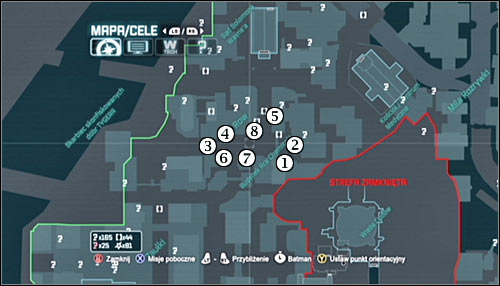 The screen above shows the roofs where the snipers are and the suggested order of eliminating them. A more detailed description can be found in the further part of the guide.

I'd suggest starting with the sniper on the roof south the theatre entrance #1 #2. It would be good to approach him from the south, using the fact that it's mostly covered by a building.

Go slightly to the north, eliminating a sniper in front of you #1 #2. He's standing above the entrance, so make sure you don't jump down after eliminating him or you'd end up targeted by all the others.

Move away from your current destination and locate the sniper patrolling the area west of the theatre building #1 #2. As he's standing on a rather small platform, you could lower yourself behind him and throw him down by pressing Y. Don't move for a moment after getting rid of him, making sure no one else is looking in your direction.

Now I'd suggest approaching the sniper standing on the roof of the left building, the one north-west of the theatre #1 #2.

In order to reach the next sniper, you will have to return east. He's north of the theatre building #1 #2 and eliminating him earlier on would probably cause one of the previously eliminated enemies to notice you.

The next sniper is standing on the roof of the building located south-west of the theatre #1 #2. You should approach him from the west and at the same time avoid using the main street, travelling along roofs and gliding.

Now head straight east and very soon you will come across yet another sniper #1 #2.

The last of the snipers standing on roofs can be found north of here #1 #2, to the north-west of the theatre building.

Now you will only have to eliminate the two snipers standing beside the theatre entrance #1. I'd suggest attacking one of them from above, though you could also make some preparations and use the Disruptor or Reverse Batarang #2.

Upon landing, quickly attack the second sniper #1 before he can shoot at Batman. Afterwards you can use the main door leading into the theatre #1.