The Batman: The Enemy Within game guide is a collection of all episodes released by Telltale Games. Every part of the guide contains a well-illustrated walkthrough along with any potential differences resulting from different decisions made in previous episodes. Each chapter contains a list of dialogue options and solutions of riddles. The guide is concluded with a separate chapter entirely dedicated to the most important decisions in the game. There, the decisions and their consequences were discussed in detail.

Batman: The Telltale Series was initiated in 2016 - this is episode 2. In the game by Telltale Games (known for The Walking Dead: A Telltale Games Series and The Wolf Among Us: A Telltale Games Series) you will learn the story of Bruce Wayne, who slowly hives in to gloom, and his heroic alter ego - Batman. This time, Batman will face Joker, The Riddler and a ruthless federal agent, who appeared in Gotham. In the game, you explore small locations, talkt to encountered people, take part in QTEs and of course make difficult moral decisions that influence the way the events unfold. In Batman: The Telltale Series - The Enemy Within, we will again hear the actors known from the first part - Troy Baker as Batman and Anthony Ingruber as Joker.

The complete list of episodes of Batman: The Enemy Within:

Episode 5 - Same Stitch - offers different gameplay and entertainment due to decisions made in episode 4. It has been divided into two various versions:

Minimum System Requirements for Batman - The Enemy Within

Recommended System Requirements for Batman - The Enemy Within

This game guide was based on a PC version. We've used the following system specification to enjoy the game:

The above specs allow playing the game in high resolution - Full HD (1920x1080) and with maximum graphical settings. There were no frame-rate drop down issues during our play and the game sustained a high amount of FPS (usually above 60 FPS).

About Batman: The Telltale Series - The Enemy Within Game Guide

Batman: The Telltale Series - The Enemy Within Video Game 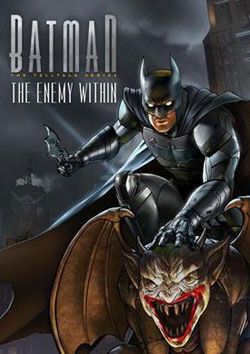 The second season of Batman: The Telltale Series, which debuted in 2016. In this adventure game by Telltale Games (the developers of such titles as The Walking Dead: A Telltale Games Series and The Wolf Among Us: A Telltale Games Series) the player follows the darker and darker story of Bruce Wayne and his superhero alter-ego. This time Batman has to challenge both Joker and Riddler as well as a merciless federal agent who has just came to the city of Gotham. The story is split into five episodes, the first one of which launched in August 2017. In the game you get to explore small locations, talk to characters met there, play through QTE sequences and, of course, make difficult moral decisions that determine how the story unfolds. Batman: The Telltale Series - The Enemy Within features actors that made the appearance in the first game. Batman is starred by Troy Baker, while his arch-nemesis Joker by Anthony Ingruber.