The Baldur's Gate: Siege of Dragonspear unofficial guide is, in general, a very detailed and richly illustrated walkthrough, in which all of the main, as well as side quests were thoroughly described. Descriptions of all of the quests contain the circumstances of their unlock, their course, all of the available choices and their consequences, as well as the optional rewards received for their completion. Additionally, the guide contains high quality maps of all of the available areas, coupled with the locations of important rooms, closed doors and chests, traps, and places in which you can meet allies, as well as powerful enemies marked on them. The guide is complemented with smaller chapters focused on, above all else, the ways in which you can start the new campaign, elements of gameplay mechanics added in the expansion, or the achievements associated with the new campaign. Siege of Dragonspear is a large expansion to the Baldur's Gate: Enhanced Edition - an enhanced edition of the legendary isometric RPG game, released in 2012. The title, previously known as the Adventure Y, is the link between the first, and the second installment of the franchise, offering about 25 hours of adventure. Similarly to the previous, enhanced editions of the game, the discussed PC version of the title was developed by the Overhaul Games, one of the branches of the Beamdog company. 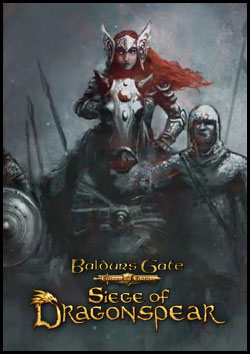 Siege of Dragonspear is a large expansion to Baldur’s Gate: Enhanced Edition – a 2012's remastered version of the cult isometric RPG released on PC. The story in the expansion connects the storylines of Baldur’s Gate and Baldur’s Gate II, although it faces us with a completely new threat. Killing Sarevok (the main antagonist from the first game) theoretically should have saved the world from the evil spawn of Bhaal. Alas, Siege of Dragonspear reveals that the victory celebration was premature, for an evil crusade is marching down from the north, led by a mysterious, charismatic female warrior called Shining Lady. The rumor has it she too, like the game’s protagonist, is a Bhaalspawn. The player has to set off on a quest to face her.

Among the new features implemented in Siege of Dragonspear, the most essential, right after new quests and locations to explore, are four new companions who can join your party: Captain Schael Corwin (a human archer), Voghiln the Vast (a skald from the north), M’Khiin Grubdoubler (a goblin shaman), and Glint Gardnersonson (a gnome with combined abilities of a cleric and a rogue). The companions' descriptions reveal another novelty – playable shaman character class.

Siege of Dragonspear offers the same play modes as the base game. Hence, you can complete the story campaign either solo or in a group of six cooperating players. Siege of Dragonspear is based on the classic technology offered by the Infinity Engine. This site is not associated with and/or endorsed by the Atari / Infogrames or Overhaul Games. All logos and images are copyrighted by their respective owners.