This chapter of the Baldurs Gate 3 guide describes how to easily and quickly defeat a much stronger opponent at Ancient Abode - Auntie Ethel (the Green Witch), and what reward you can get after completing this task.

Auntie Ethel is a seemingly innocent old lady. But don't be fooled by her likable appearance and soothing voice, as they are mere appearances. The Green Witch, as this is her true name, does everything she can to gain what she cares about most, and is not afraid to sacrifice the lives of innocent beings in the process. The confrontation with this adversary takes place in the Ancient Abode - an underground cave that can be accessed through a hut called Teahouse, which you will find in the wetlands.

At the time of writing this guide, there is a troublesome bug in Baldurs Gate 3 which causes Auntie Ethel to not appear in her Abode and thus the fight cannot be automatically activated. Below you will find a way to force this fight and successfully complete the Teahouse quest, thus saving Mayrina. 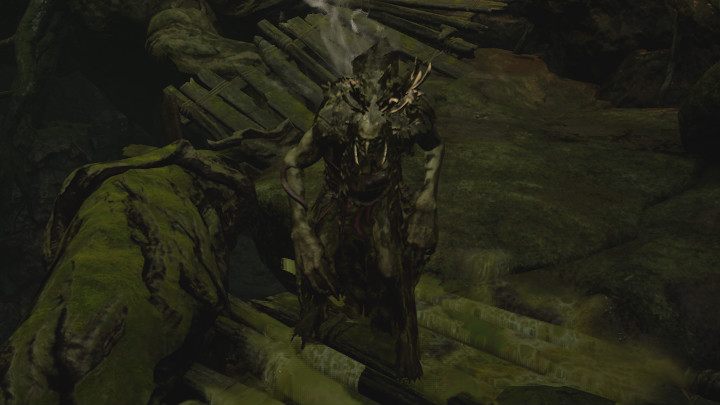 Before you enter Auntie Ethel's cabin, it's worth knowing what dangers you might face before your fight the Green Witch. 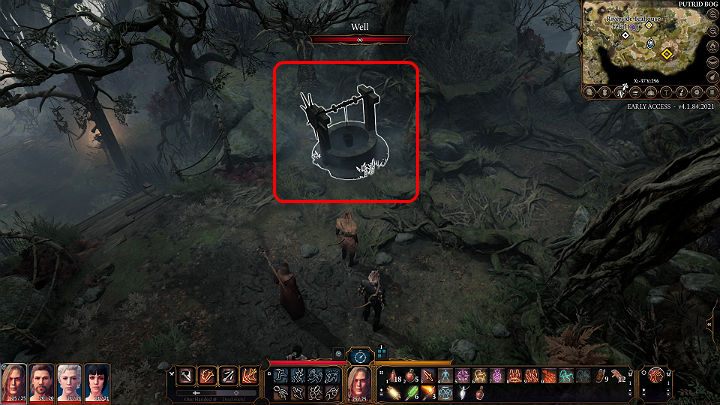 It's certainly worth paying attention to the well next to the witch's hut. If your character drinks water from this well at the very beginning he or she will feel refreshed, and this effect will increase his or her maximum health by up to 10 points. Unfortunately, after your first conversation with Auntie Ethel, it turns out that the water was poisoned and your characters will suffer from stomach ailments. 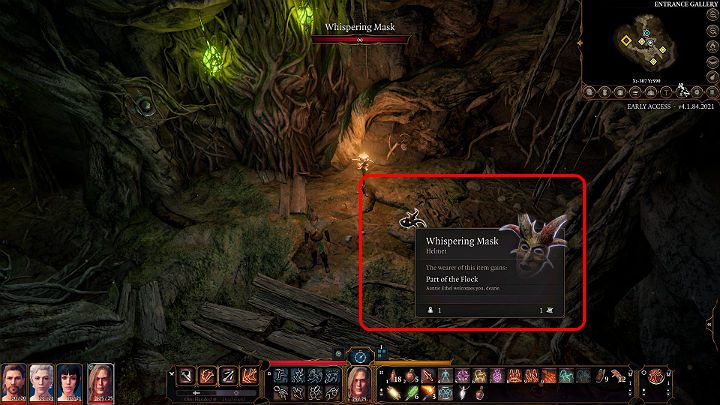 In the vestibule of the Overgrown Tunnel you will find some strange wooden masks. Don't wear them under any circumstances, because your hero will be possessed by the witch and will start attacking members of his or her own team. I'm sure you can do without that dark artifact. 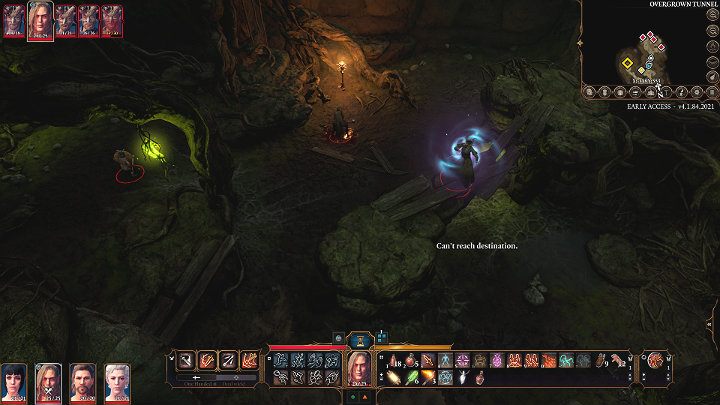 As soon as you enter the Overgrown Tunnel, you will encounter opponents wearing the aforementioned masks. It is worth attacking them by surprise to gain an extra attack turn and finish off at least one opponent before the match starts for good. Pay special attention to characters who wield magic, as they can heal their allies and cast curses on your companions.

To get through the Overgrown Tunnel safely, the Feather Fall spell that your Wizard should have will be extremely useful. If this is not the case or you don't have a Wizard on your team you can always use the appropriate scroll. Feather Fall makes the characters invulnerable to damage from falling, and it will be an extremely useful ability as they wander through the Overgrown Tunnel. 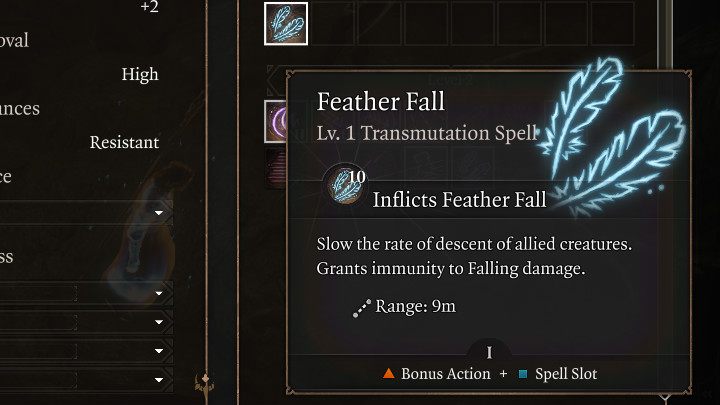 Overgrown Tunnel - how to get there?

Once you enter Aunt Ethel's hut, you can conduct the conversation any way you wish. Upon starting the fight, the opponent will quickly use the invisibility potion and then walk through the fireplace to other sections of the location. 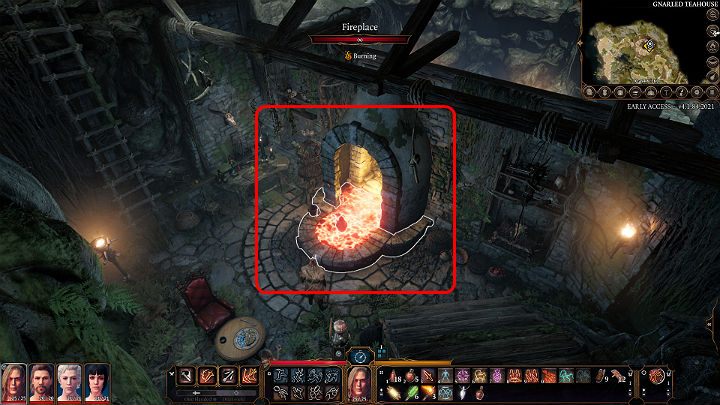 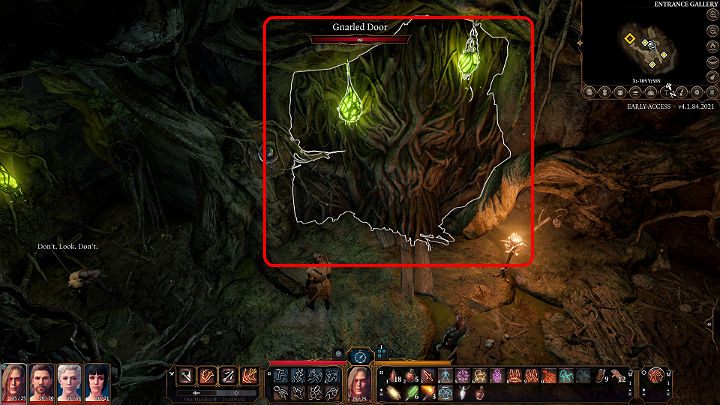 In the rest of this location, you will find a frightened Elf and automatically proceed to talk to him. During the dialogue, you learn that the door next to the Elf is a clever illusion designed to keep uninvited guests away from Auntie Ethel's Ancient Abode. After finishing the dialogue, just walk through the door and the characters break through the illusion and find themselves on the other side.

Overgrown Tunnel - how to pass safely?

After entering the Overgrown Tunnel, your team will have to walk through a real maze of winding paths covered in green and poisonous fumes. When a character is standing on an infected area he or she will start receiving damage - so it's worth avoiding. Below, we explain how to walk safely and without any harm through the Overgrown Tunnel straight into the Green Witch's Ancient Abode. 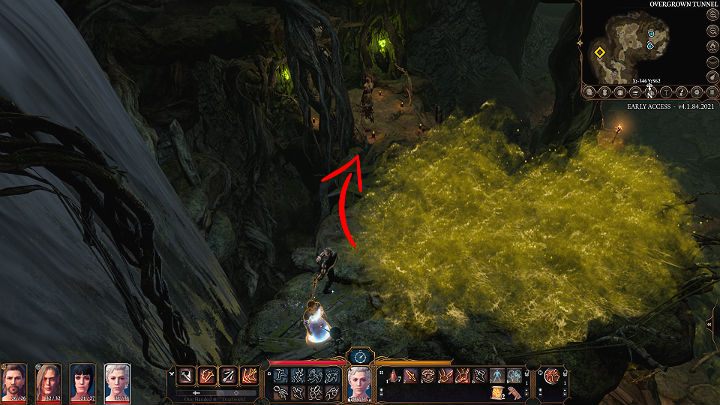 From the first platform, follow the narrow path to the left - you will need to turn the camera accordingly to see it. Here it is worth splitting the team and moving each hero separately, as they can block each other and try to bypass their companions and thus enter the area covered by the poisonous cloud. 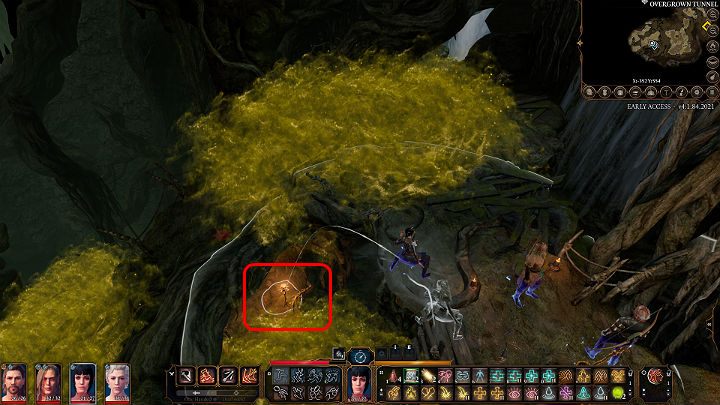 At this point, you should use the Feather Fall spell to prevent team members from fall damage when jumping off high ledges. Remember that the spell only lasts ten seconds so you have to perform the entire operation very efficiently. Enable the jump action and aim for the spot highlighted in the image above, then move slightly forward to make a landing spot for the other team members. 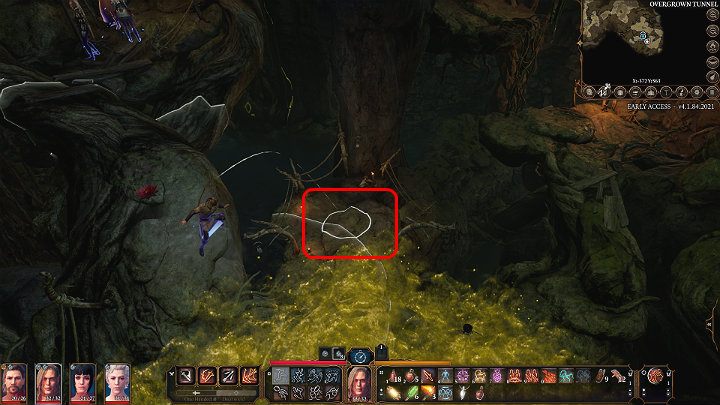 After landing, descend slightly lower and jump again so that the character lands on the left side of the poisonous cloud, around the spot shown in the image above. When you land, move a little forward to make room for the rest of the team. 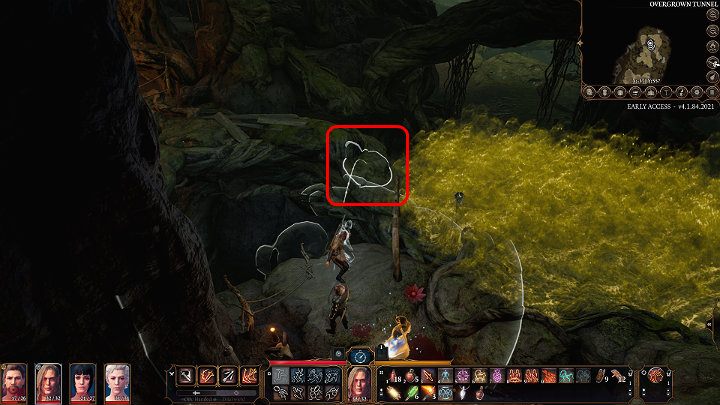 Approach the edge of the rock, and jump once again - aim for the spot marked in the image above. After landing, move slightly forward or sideways so that the rest of the team can land unhindered. 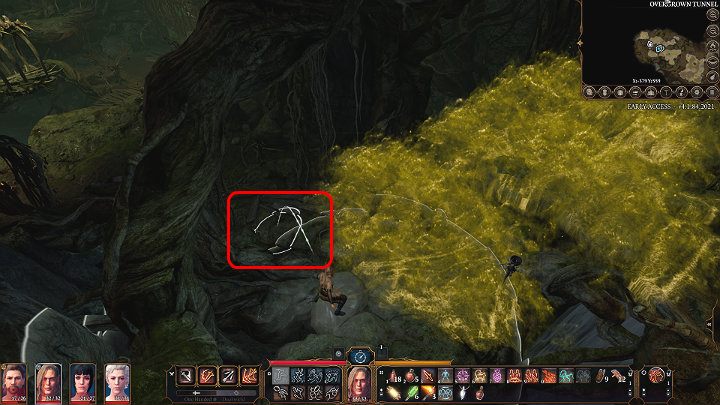 Now all you have to do is make one last leap to find yourself in the Ancient Abode and go into battle against Auntie Ethel. Aim for the spot marked on the screen above, and after landing make some room for the rest of the team.

Bug - how to start a fight?

Many players have trouble triggering the cutscenes with Auntie Ethel, which should normally start the fight. This is due to the fact that the Green Witch was under the influence of the invisibility potion on her way to the abode, and apparently, this state is still ongoing and cannot be interrupted. If nothing happens to you after you enter Ancient Abode, you can try to provoke a fight in two ways. 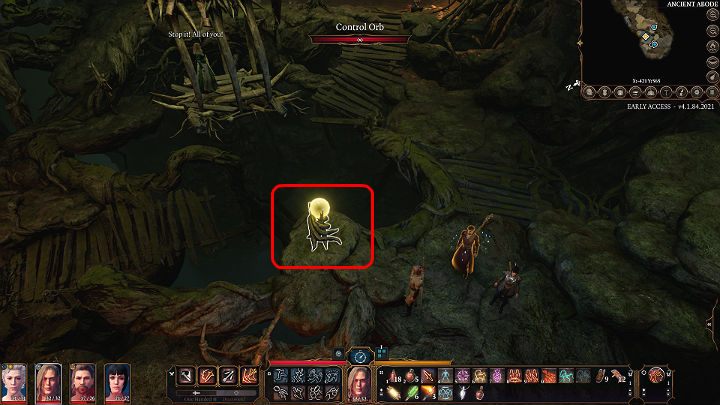 First, check whether using the bowl (and as a result freeing Mayrina, who was being held captive by Aunt Ethel) marked in the above image will start the fight. If that doesn't happen, you can still try to get into Myrina's cage and see if it works. 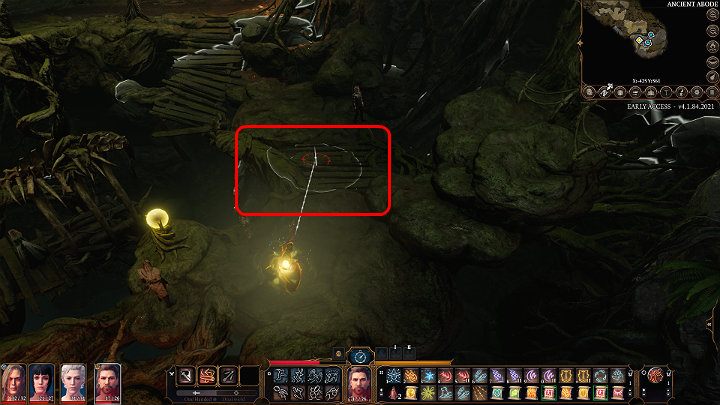 If the above methods have not worked and you have failed to summon Aunt Ethel, choose a character with area spells and then point to the place marked in the image above (a wooden bridge connecting two rock slabs). The spell should reveal the position of the witch, who is still under the influence of the invisibility potion - this effect has to be lifted. Cast an area spell and wait until the opponent has successfully executed a defensive dice roll. 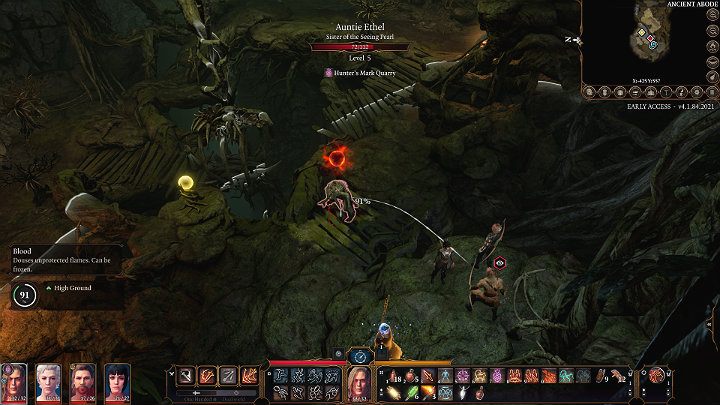 Once Auntie Ethel receives damage, her position is revealed, however, she will not perform any aggressive actions - she will not attack but she will still be able to move sideways and make defensive throws. Take a position higher than your opponent to make it easier for you to attack her with your usual weapon or Cantrips (use your spell slots) until the witch dies. 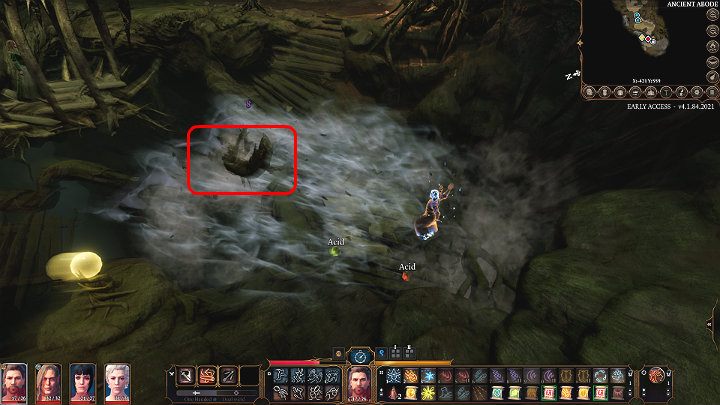 You can also push her into the abyss and eliminate her immediately, but only if you don't care about the reward. You'll get the same amount of experience points, but you won't get a rare item. When doing this, you have to choose the character that has the highest possible strength to increase the chance of success. The Wizards also have a useful Thunderwave spell that will also be effective.

Defeating Auntie Ethel's Green Witch will, of course, be appropriately rewarded. In the belly of the defeated opponent, you will find a rare green object called Corellon's Grace. It is a very good weapon for Wizards, as it provides a character who wields it and does not have armor with d4 bonus to defensive dice rolls.

A rare item can only be acquired if Auntie Ethel is defeated in a regular way. If you decide to throw her into the abyss, she will only leave behind bottles of potions, and the object will be gone. 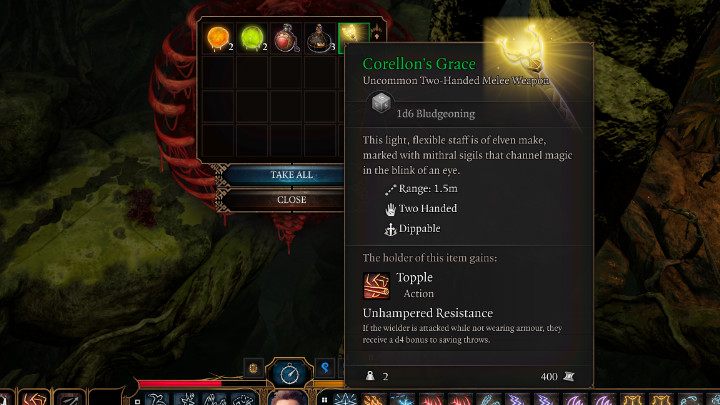