This page of the Baldurs Gate 3 game guide describes how to get to Goblins Camp. We have described all the main options that allow access to this location in a "legitimate" way, either by sneaking in or by attacking goblins. 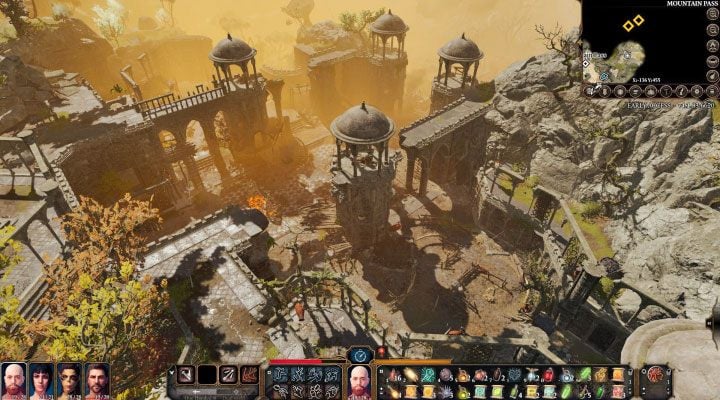 For the record, Goblin Camp is a large location at the western end of the area explored in the first act of the campaign. In our world atlas, the Goblin Camp is visible on the M6 map - we have marked all important areas, potential threats, treasures, and traps on this map. 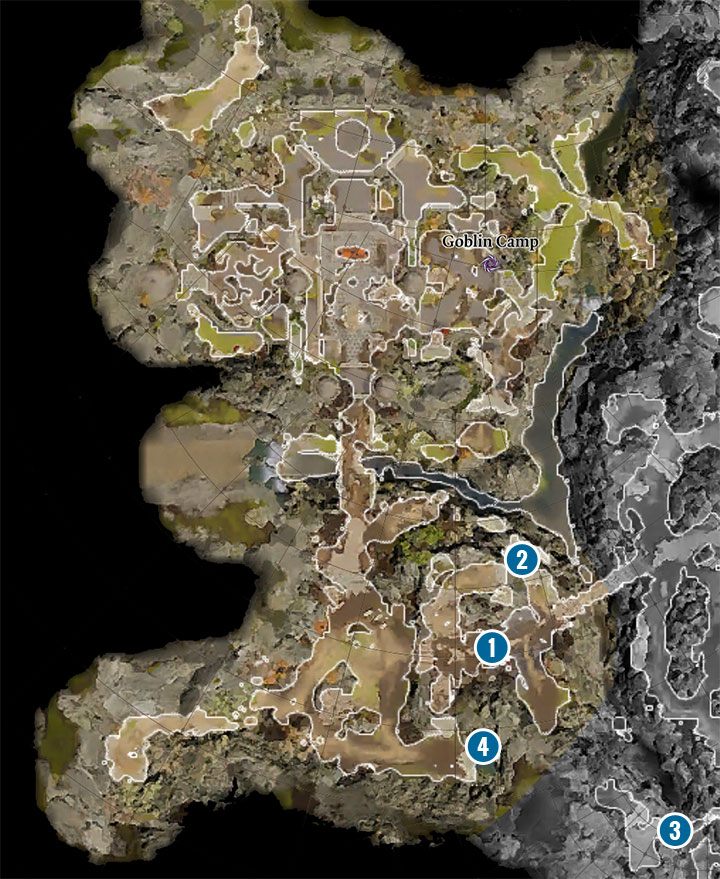 In the image above, there are location points worth visiting to infiltrate the Goblin Camp. For more detailed descriptions of possible ways to get to the Camp, see below.

Additional information - the Goblin Camp cannot be reached from the north (that is, from the side of the mountain pass), although there is a high rock shelf from which you can see the whole location. 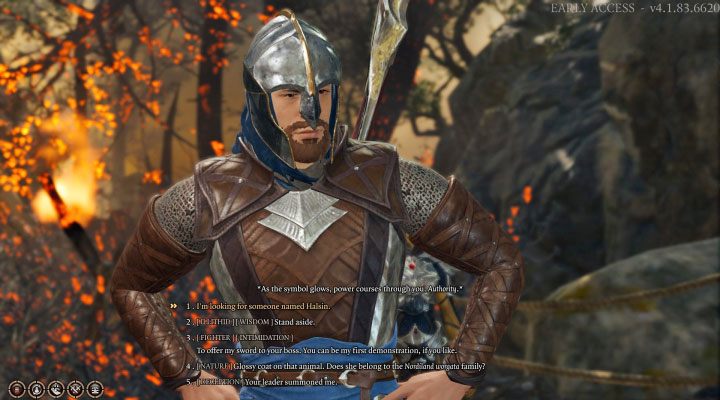 The most obvious option of getting into the Goblin Camp is to meet the goblins who guard the entrance in the southern part of the area (1 on the map). There are several ways you can convince the goblins to let you in:

You can also be forced by the goblin guarding the entrance to humiliate yourself and... smear yourself with poop. You have to agree and do this perfectly. Otherwise, there is a risk of provoking the goblins into battle. 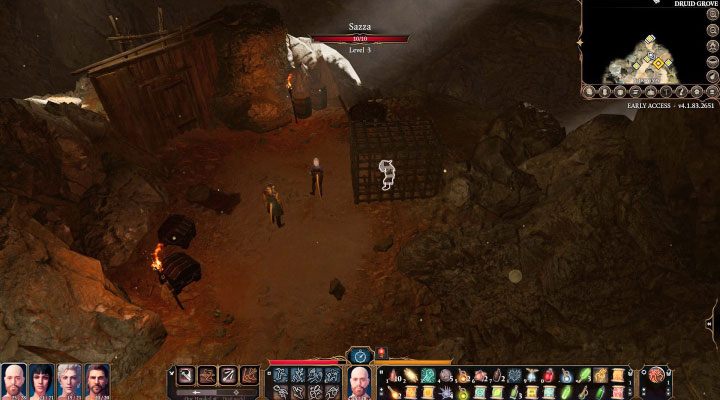 There is also an alternative way of peacefully entering the Goblin Camp. When exploring Druid Grove (location in the central part of the map - the M3 map in our guide) you can find the makeshift prison where Sazza the goblin is being held.

When you get to prison for the first time, you have to save Sazza's life. To do so, you have to stand in front of the cage and pass Persuasion or Intimidation test to stop her execution. It is advisable to save the game beforehand, as failing the test can lead to a fight against the characters in prison. 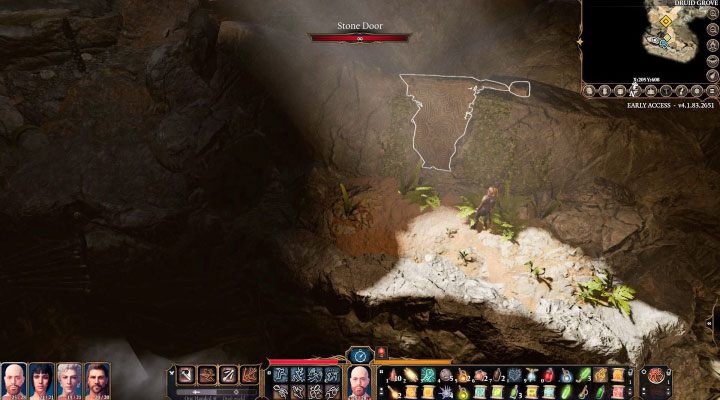 After you're alone with Sazza in prison, you can talk to her and discuss your desire to meet the goblin healer. You can free Sazza by successfully using the thief's tools on the door of her cage. Fortunately, you do not need to break through the entire grove with the liberated goblin, as there is a secret passageway at the back of the cage that allows you to escape the location in secret.

If you successfully saved Sazza, she can vouch for your character and allow you to enter the Goblin Camp. 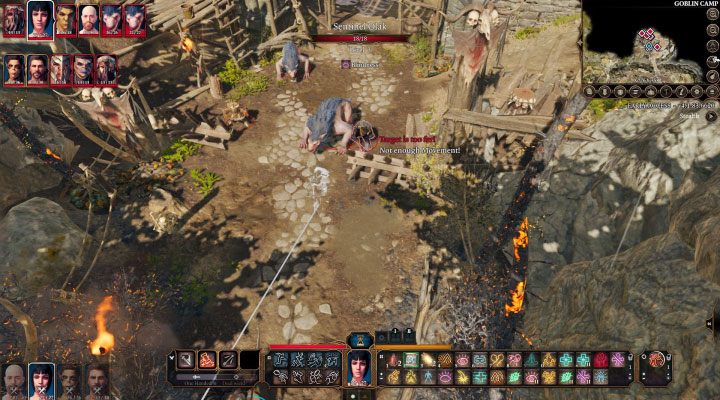 A clash with the goblins guarding the main entrance (1 on the map) can result from a bad conversation, failure of a skill test, or can be started by you.

Joining the battle with goblins without prior preparation is not a good idea because the opponents who stand on the higher ledges will have a good field of view and a good chance of successful attacks. It is best to try to sneak up on your opponents and better deploy your team members before the proper fight begins.

Option 3 - Sneak to the right of the main entrance 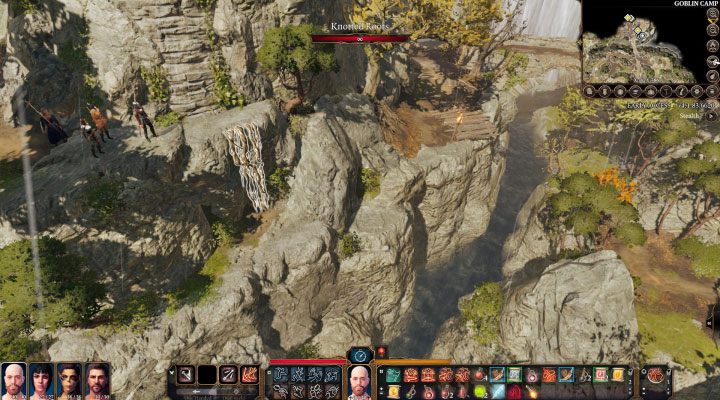 To the right of the main entrance to the Goblin Camp (Point 2 on the map) you will find two interactive climbing areas. You can climb the rocks to reach the upper ledge or descend the roots to the lower ledge and then move along a small cliff.

In both cases described above, you must avoid detection by a goblin observing the area from above, as he can stop the team and attack it upon re-entering the forbidden area. Sneak your heroes through one by one as the goblin scout looks the other way.

Option 4 - sneaking to the left of the main entrance 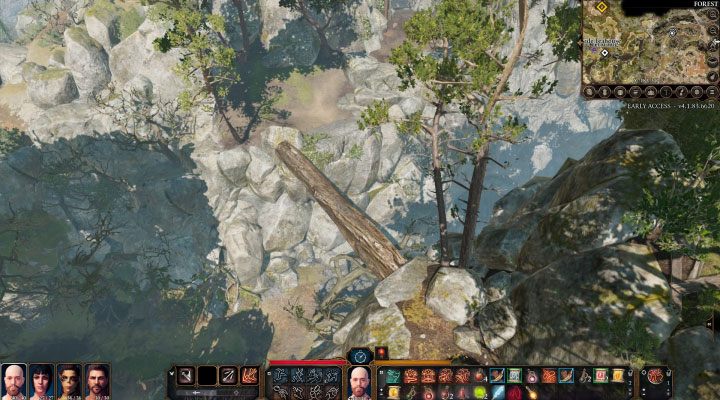 The areas to the left of the main entrance to the Goblin Camp can be reached by bypassing them or by reaching it from the Forest. In the latter case, take a look at the fallen tree (3 on the map), which is at the southern edge of the region.

You can jump off onto the rock ledge with a tree. When walking through a tree, it is very important to do move your heroes one at a time, as it will not support the weight of several characters and break, resulting in your team members falling into a chasm and being killed or seriously injured. 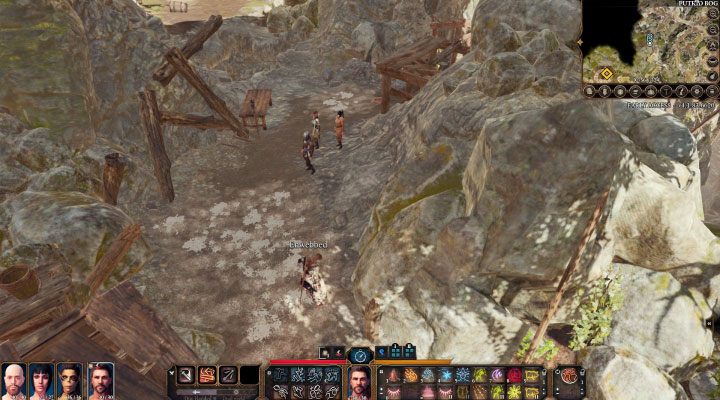 When exploring the path leading to the Goblin Camp, you have to be careful of mines-traps (they can be discovered by passing perception tests) and spider webs. Fortunately, spider webs do not deal damage, and "only" slow down your heroes who fail to make successful defensive rolls before being immobilized.

A small gap is adjacent to the side path (point 4 on the map), over which you can jump (one by one). After a successful jump, you will find yourself in the Goblin Camp and at the same time, you will not have to meet the goblins set up at the entrance gate.