This page of the Baldurs Gate 3 game guide includes the M5 map of Blighted Village. We describe how to enter the village occupied by goblins, and what unique places and potential threats await the heroes in Blighted Village. 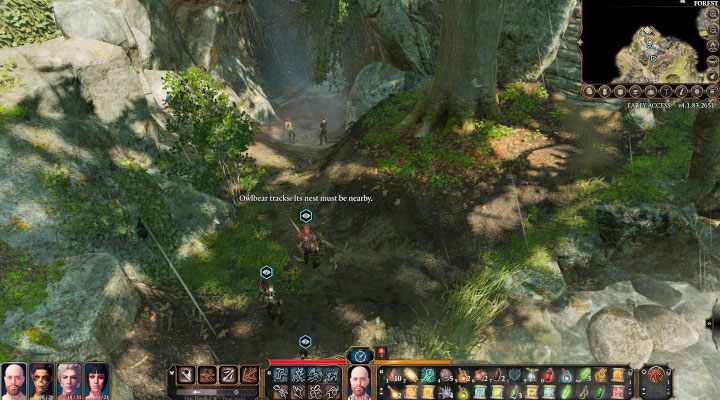 1. The entrance to the owlbear nest. The nest is linked to a meeting with clerics that may have occurred in the Forest (map M3, Blue Point 20). If you've led the conversation well and agreed to avenge the death of a man murdered by an owlbear, then the clerics can wait at the entrance to the lair and help defeat the monster.

The owlbear is a strong beast. The description of the battle with it can be found in the Bosses chapter. Still, you can also peacefully communicate with the owlbear by talking to animals or passing the Animal Handling test. There is a gilded chest with a trap in the lair - a description of opening it can be found on a separate page Chest next to the Owlbear Nest from the chapter titled Solving Puzzles. 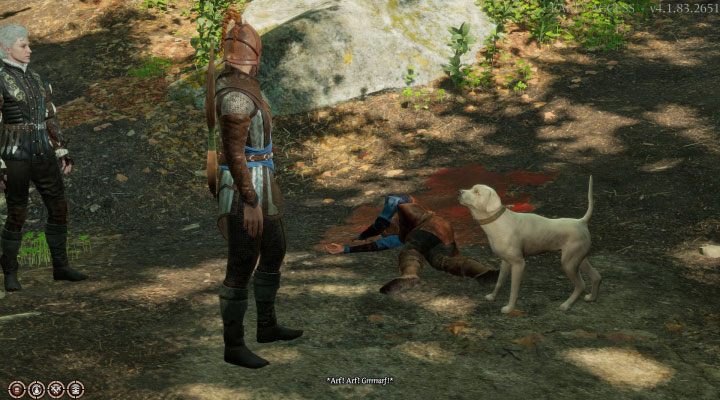 2. Scratch the Dog. It watches over the corpse of his master Gomwick in the woods. You can calm the dog by talking to it (appropriate spell or potion required), or by passing the Animal Handling, Persuasion, or Intimidation test. It'll let you pet Scratch. You can allow the dog to sniff the hero, so it can show up in the team camp from now on. On Gomwick's body, you'll find some letters and small loot. 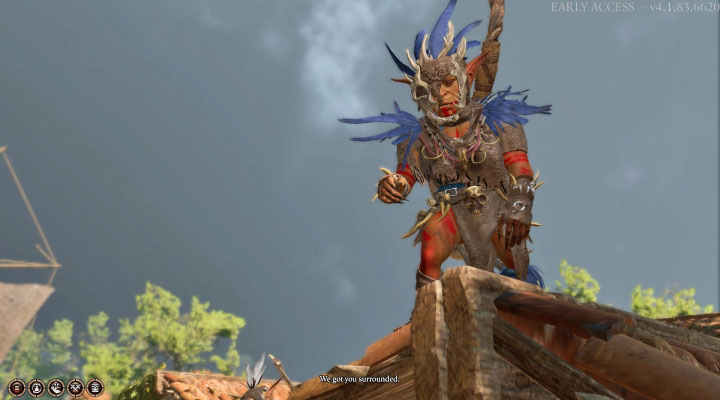 3. The entrance to the village. There are goblins in an Blighted Village. You can approach from the east (near the bridge and the forest) or from the south (near the Marsh).

On the first attempt to enter the village, you are stopped by goblins. Joining the fight against them is not required and it is not advisable, because you can find yourself in the crosshairs of all the creatures in the area. If you still want to fight, use stealth to get close to the goblins or, for example, set up your team members in the best spots. It's worth trying to pass a persuasion or intimidation test - a successful test will allow you to travel freely around the village. 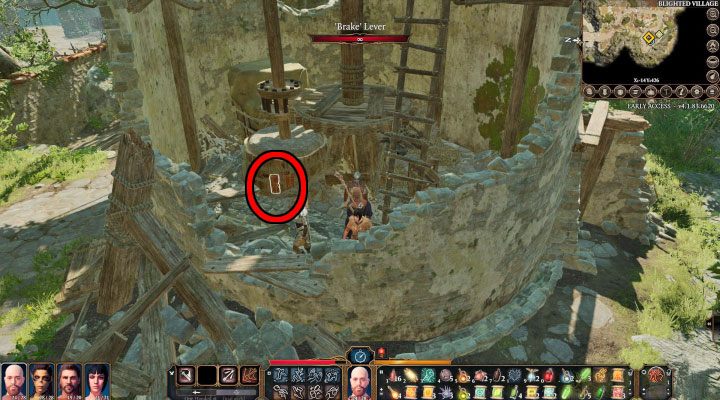 6. Windmill. A group of goblins bully a gnome tied to a windmill - you can attack them, pay the full sum (1,000 gold) to leave the place, pay less by using persuasion (different tests on different difficulty levels) or use illithid power to get the goblins to leave.

You must stop the windmill to free the gnome - the button is inside the windmill, on the ground floor (shown above). 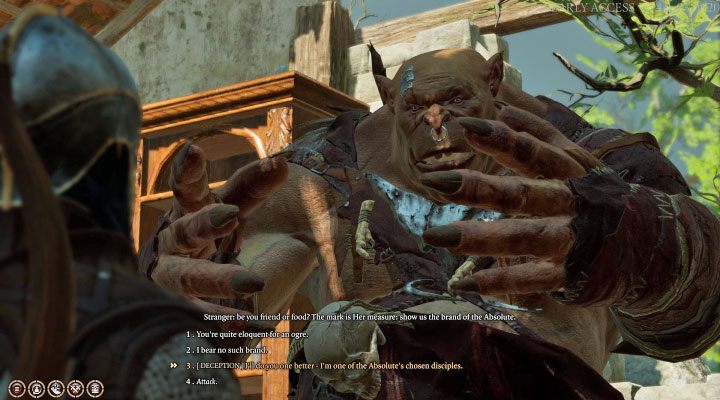 2. Ogres. The lives of the team could be in danger here. The encounter with the ogres begins upon entering the ruined building. If you don't want to be attacked by them, you have to pass a Deception test. Monsters stand by the corpse of the tiefling - among other things, you'll find a unique amulet. 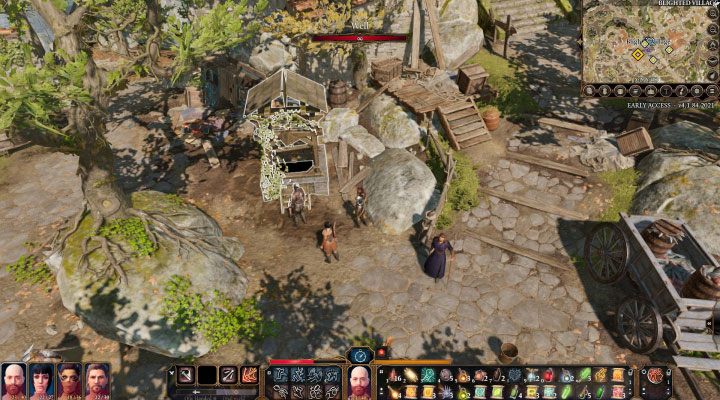 Whispering Depths is a bigger dungeon located beneath the Blighted Village. There are two main ways to reach this cave complex:

The first method is to interact with a well in the village (the blue 7 on the map). You can optionally pass an investigation skillcheck and examine the well a little more thoroughly first. Slide down the rope to the cavern. 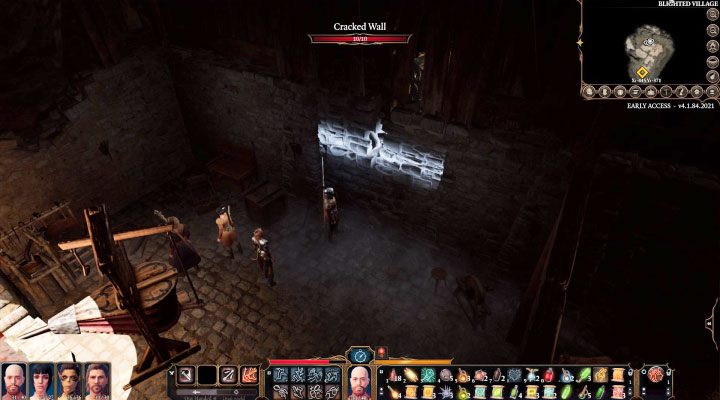 The second method involves examining the basement of a building in the central part of the village (the blue 8 on the map). In addition to searching the basement (watch out for traps on some crates!), you have to complete a skillcheck to discover the cracked wall shown in the picture. You can then demolish this wall in any way you want, e.g. using melee weapons or offensive spells. This will allow you to enter the dungeon behind the wall. 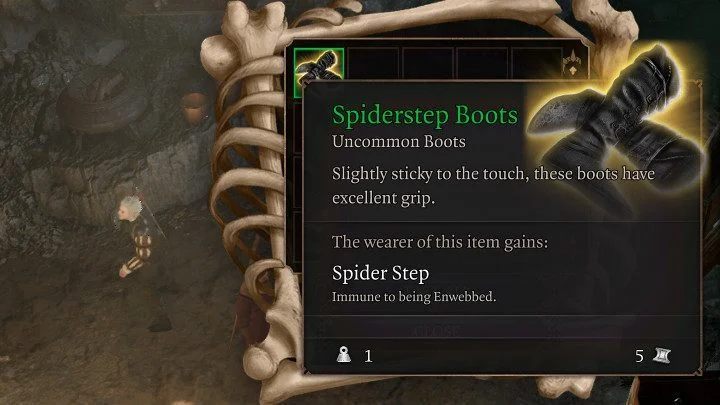 The cobwebs which act as bridges in some parts of the location make the exploration of the Whispering Depths problematic. When you step on a web, the hero will have to make defensive throws  failing one of them will inflict the negative Enwebbed status. In this state, the hero is unable to perform any actions and will additionally alert the surrounding monsters.

One solution to the problem with the cobwebs is to find corpses in the dungeon  loot them to get the Spiderstep Boots. This item makes the wearer immune to the Enwebbed status. Since the boots can only be worn by one party member, it's worth assigning them to the hero you will use to explore the dungeon. Of course, even with the Spiderstep Boots on, you still have to watch out for the monsters. 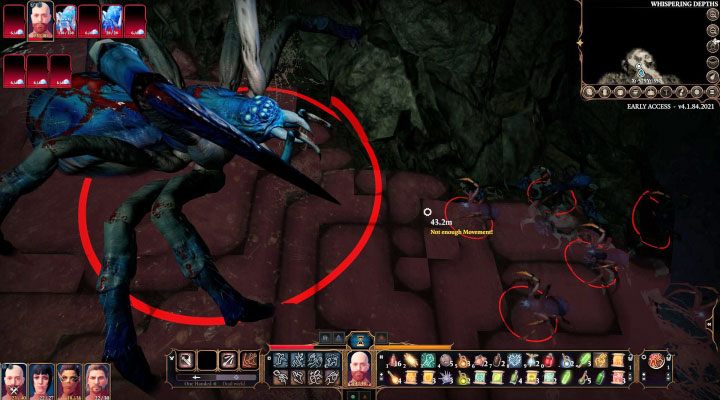 The Whispering Depths are inhabited primarily by Ettercaps, which can cause temporary infections, and Phase Spiders, which, in addition to possessing venom, can also teleport. Try to jump onto shelves with spiders or pull them to yourself. Also, try to attack smaller groups of monsters  you will avoid situations in which you get surrounded by several creatures.

The dungeon is also home to the Phase Spider Matriarch  a much tougher monster described in the Bosses chapter. Before you try to defeat the Matriarch, try dealing with the Phase Spiders without alerting her. You should also destroy the eggs so that the little spiders can't "hatch" after engaging in a fight with the boss. 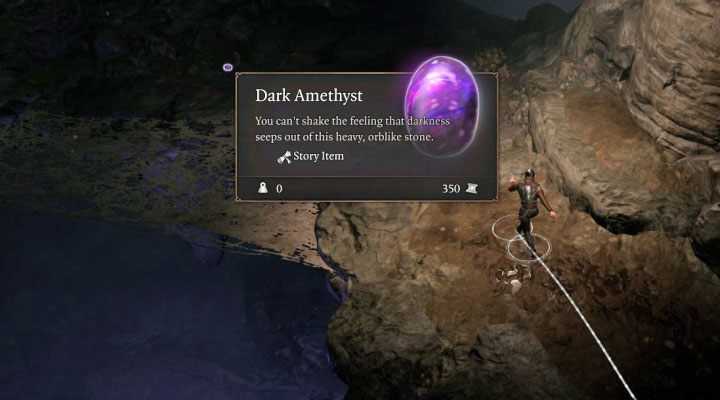 There are quite a few treasures in this dungeon. Most of them are found on corpses, in various types of backpacks and other containers. You can find Dark Amethyst, an important quest item, near the lair of the Phase Spider Matriarch. If you don't want to fight the giant spider, you can just sneak past it and get that artifact.

One of the unique locations in the Whispering Depths is the encampment, where, besides journals, you can also find various scrolls.

Additional location - the cellar of the necromancer's house 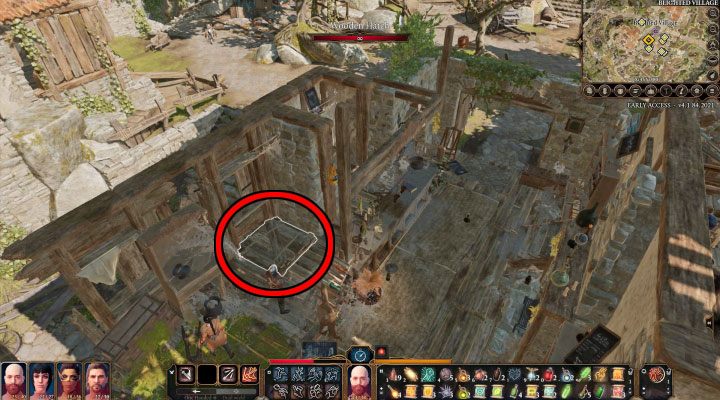 The ruined necromancer's house is located in the southeast part of the Blighted Village (the blue 9 on the map). Inside the building, you can find, e.g. some potions. The most important object, however, is the hatch shown in the image above. It allows you to move into the vast cellar. 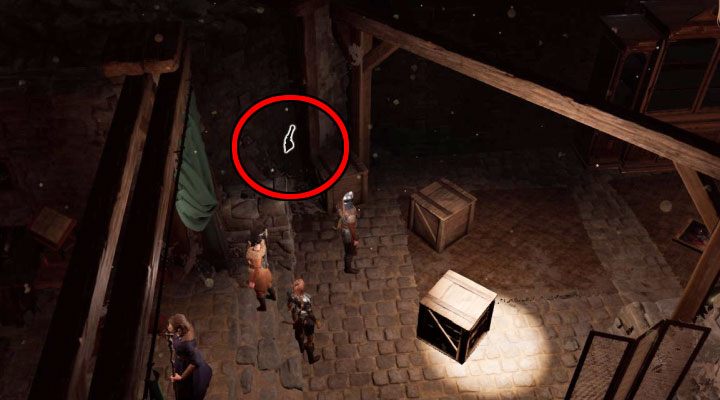 In the first area of the basement, you can find more loot. However, the most important treasures are hidden. Locate the switch hidden behind the crates and shown in the picture. Use it to unlock a passage.

Go further into the basement to come across a talking mirror. To unlock the passage behind the mirror, you must answer correctly:

If you choose answers that aren't satisfying for the mirror, you will fight monsters. 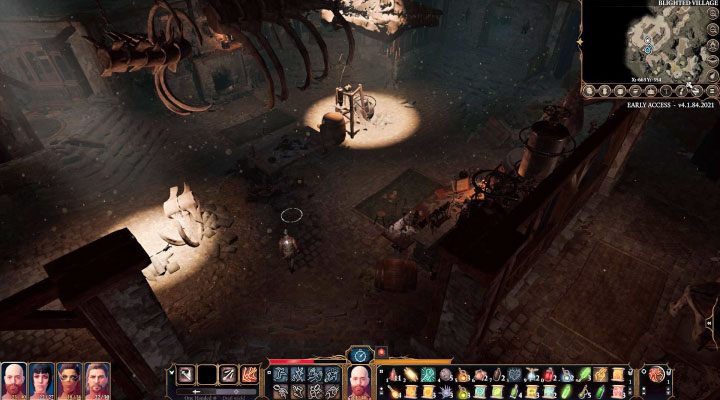 Passing the mirror's test correctly unlocks access to the necromancer's lab. The most valuable item in this location is The Necromancy of Thay book. The book is inside a locked room that also has traps  check out the Necromancy book and traps page to learn how to get it.

In the lab, you can also find research notes (quest items), various potions, and magical scrolls.

Other information on the Blighted Village map

Blighted Village is not actually a deserted location, as there are goblins and ogres in the area. We recommend handling the encounter with the goblins guarding the entrance to the village peacefully. This will allow you to travel safely through most of the village (a few places are still dangerous, such as the south building with the ogres). You will also be able to reach the neighboring areas of the map  Goblin camp (M6 map) as well as The Risen Road and the Mountain Pass (M4 map).