From this chapter of the Baldurs Gate 3 guide, you will learn how to easily and quickly defeat Lump The Enlightened, a challenging opponent in the Blighted Village, and what reward you can get after doing this.

Lump the Enlighten is an extremely eloquent and intelligent Ogre who was hired by Goblins to do dirty work. His group consists of Chock and Fank, who are the complete opposite of their leader. Lump the Enlightened can be hired for the right amount of gold and called into battle when needed. You can also outwit him in conversation to get the same effect for free. If you want, you can also attack the gang and eliminate the Ogres to get a valuable item. 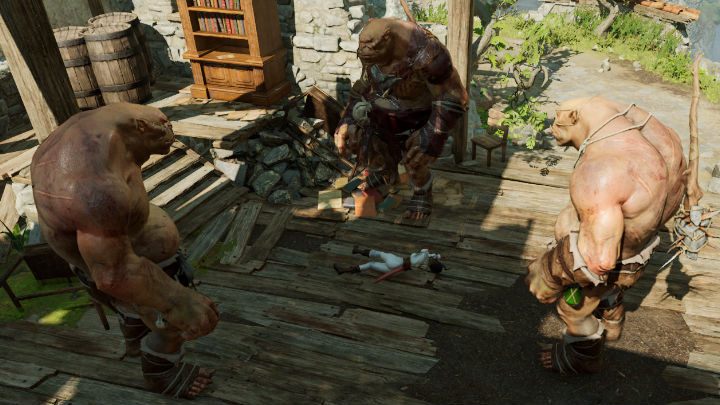 Before you start fighting Lump the Enlightened and his comrades, it's worth taking a look around the devastated room and memorizing the potential dangers. The Ogres have a few items they can use during battle. 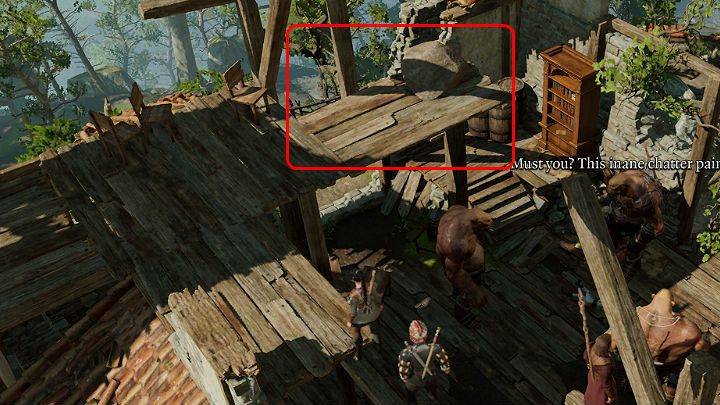 Pay attention to the trap that hangs just above the head of one of the Ogres. You can knock one of the pillars down to cause a stone fall on the head of one of the enemies. However, the Ogre standing nearby also knows how to use this mechanism. If any member of your party stands near the stone, they will immediately be knocked down, receive damage, and probably get eliminated quickly. 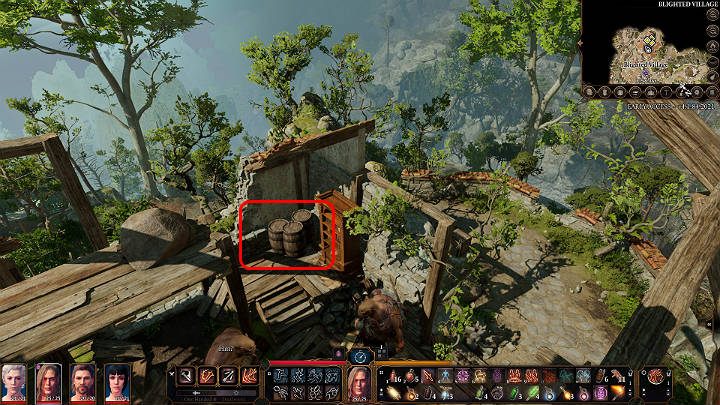 There are many objects in the room, such as barrels or chairs. The Ogres will try to get to these items and then throw them at your party. Fortunately, these objects don't deal much damage (2 to 4 points), and the Ogres do not have a good aim.

Before you face Lump the Enlightened and his comrades, you should place your party in the right spots to gain the high ground advantage and have the best chance of winning. 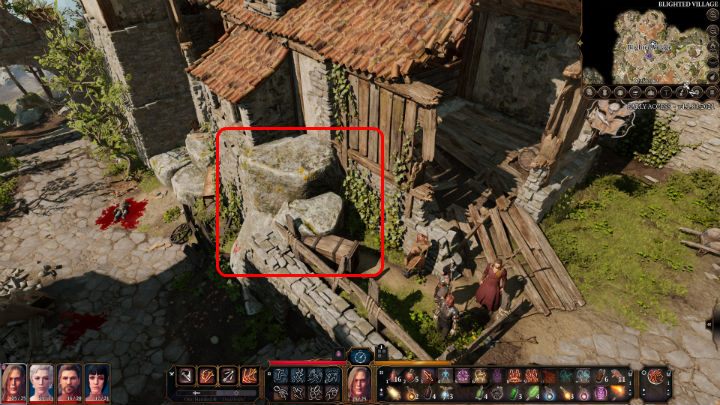 Find the stone steps to the left of the ruined hut and use them to climb to the roof. If you can't climb the low-hanging roof, just use jump. 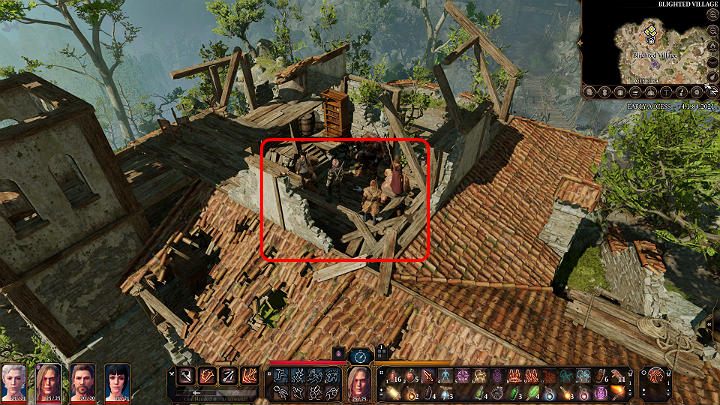 Once you're at the top, set your party members on the exposed beam so they have solid ground under their feet, as well as an excellent view of the Ogres at the bottom.

Thanks to your party's position on the roof, they will get the high ground advantage, which will greatly increase their chances of hitting the target. What's more, Lump's guards will not be able to reach them with their melee attacks  they will only be able to throw objects at them. The only opponent who can hurt your heroes here is Lump himself. 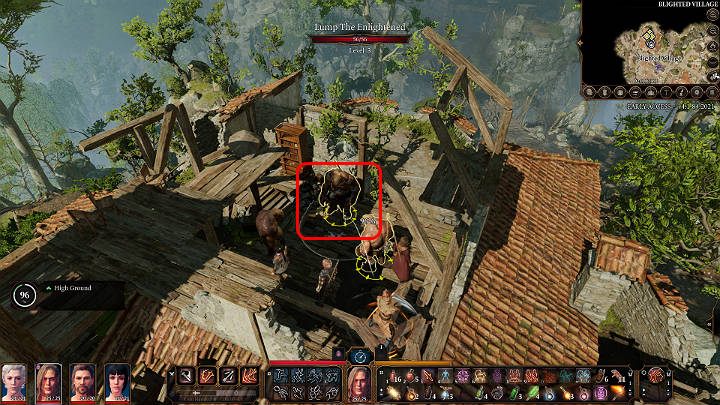 Lump the Enlightened has a few spells that can seriously hurt your party members. This makes him the primary target  eliminate him as soon as possible. 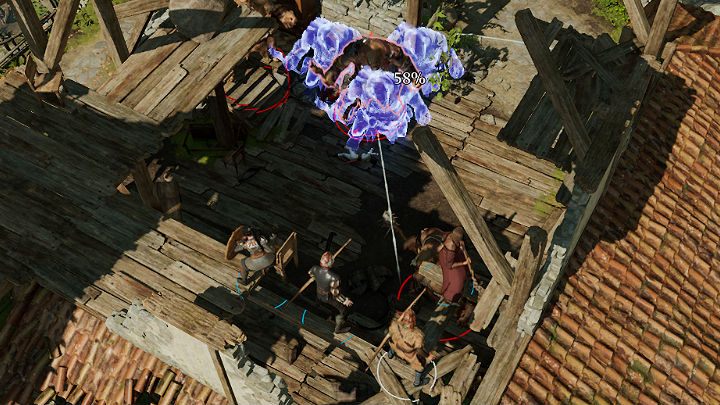 When your opponent loses about half of his health points, he will use a clever trick that creates 3 mirror reflections, thus significantly reducing your chance of hitting the main target  mirror reflections can get damaged. Just keep attacking until the opponent is down. 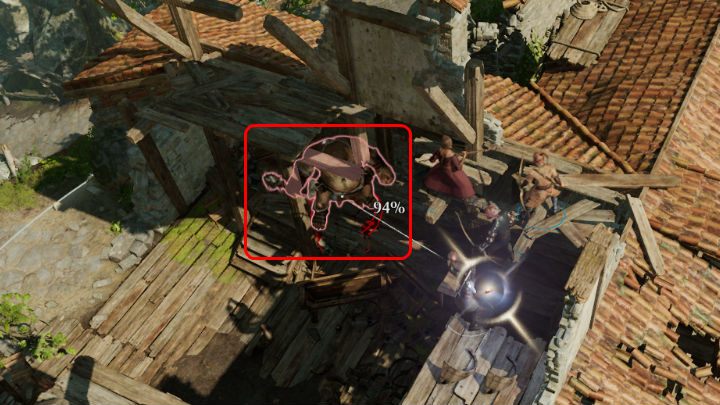 Next, you can focus on eliminating one of the guards. Chock usually occupies a position on the right where he tries to hit opponents with one of the items he throws. A couple of good strikes should be enough to defeat him. 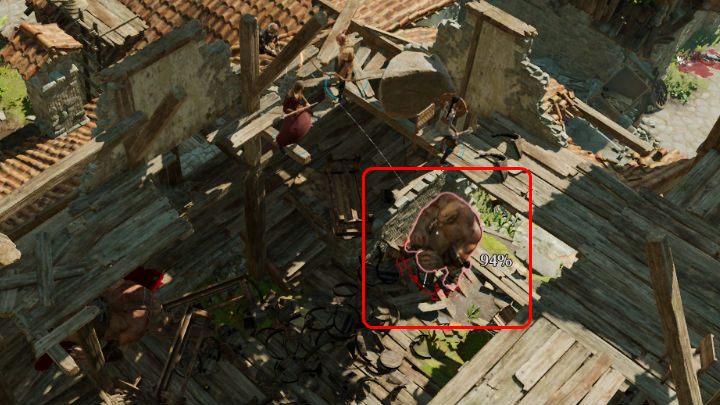 Fank, the last surviving opponent, should cause you no problems. You should be able to defeat him quickly and end the battle without losing any of your party members.

Defeating the group of Orgres will, of course, be rewarded accordingly. Loot Lump the Enlightened to find a journal, some gold, as well as a rare green object Warped Headband of Intellect. It is an extremely powerful artifact that can raise a character's Intellect value to 18 points. 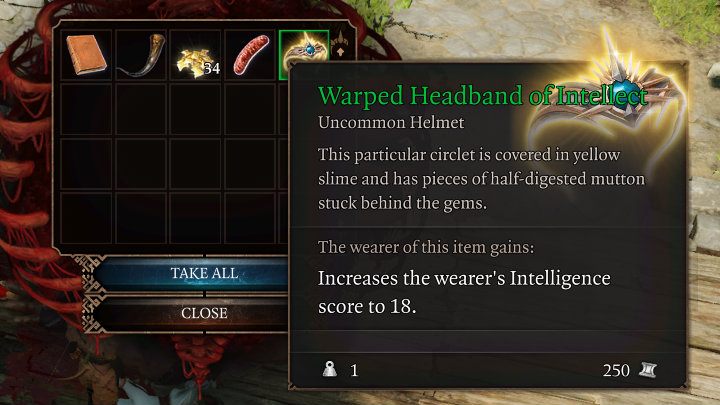