On this page of our game guide to Baldur's Gate 3 you can find a plot summary of the first installment of the Baldur's Gate series, that is, a series based on the Dungeons & Dragons system and set in the Forgotten Realms. Also, you can find important information about the Tales of the Sword Coast and Siege of Dragonspear.

Imagine that this is your story. That it all happened to you. That you were Abdel Adrian or someone that could be put in his place. That the RPG genre and The Forgotten Realms were dynamically changing in front of your eyes.

WATCH OUT FOR THE DIRE SPOILERS! 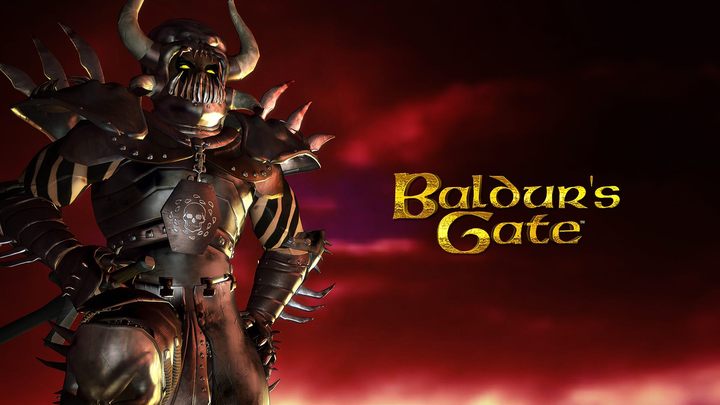 The adventure begins at the door of the inn at Candlekeep fortress. Run the last errands, greet the innkeeper Winthrop, your stepsister Imoen, and deal with some rats in the basement nearby. At some point, you encounter a few strangers who clearly want to kill you. The guards will help you deal with them. Then you run to Gorion.

The sage takes you out of the fortress in a great hurry. You sneak through the woods until you come out into a clearing with stone circles. You encounter a group of well-armed opponents. Their leader, equipped with spiky armor, wants Gorion to turn you in. The mage refuses and tells you to run. You follow the man's advice.

When you return in the morning, you see signs of a battle. Your stepfather has died. You pick up the letter found on his body  the man apologises for everything and explains that you were going to the Friendly Arm Inn to meet with his friends  Khalid and Jaheira. Before you leave, Imoen joins the party. On the trail, you meet a mysterious old man in red robes. He gives you some good advice and disappears.

After a long journey, you reach the inn. Another assassin is waiting for you. The killer was carrying a letter  you learn about a reward for your head. You head inside to meet Khalid and Jaheira. The couple are saddened to hear of the death of their friend. They take you to the mine in Nashkel which can be the source of the iron problems that plague the entire region.

You head south, pass a few towns where you solve minor problems and get better equipment. You finally reach Nashkel. You are up against another assassin. This is where you can encounter Minsc and Boo  a hunter with a large miniature space hamster. He could join you if you agreed to help retrieve the witch he swore to protect. Did you agree to this? This is your story, I won't answer that question for you. However, if you agreed to help the man, you probably went off the course, broke through a stronghold full of gnolls and saved Minsc's (and Boo's) friend, Dynaheir. And then you went to the mine.

The terrified miners refuse to go deep because their friends disappear without a trace. The corridors are roamed by various creatures and groups of Kobolds. Go and deal with the problem. The fights end in a cave where you meet the leader of the Kobolds  Mulahey. He gave the order to spoil the ores. You dealt with the leader and found a letter indicating that he was merely a pawn in something much bigger. His liaison, Tranzig, waited with the new orders in Beregost. You followed that lead.

After your encounter with Mulahey, you were haunted in your sleep by Gorion's ghost. The vision suggests that there is disturbing knowledge waiting for you to discover. In the morning, you realized that you had gained a weak healing ability.

The road to Beregost led through Nashkel. You got your reward and faced another assassin. In Beregost, you encounter more thugs who want to get the bounty for your head. Someone really wants you dead. In the city, you have another encounter with the sage in red robes. He introduced himself as Elminster, a legendary magician and friend of Gorion. He gave you some clues about the bandits in the northern part of the Sword Coast, apologized for being so enigmatic before, and then left you. 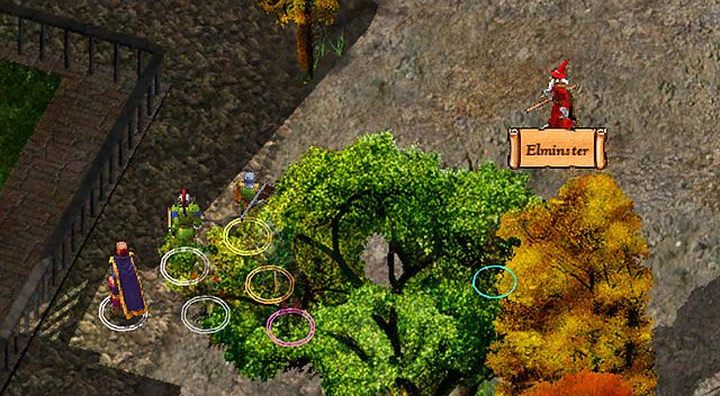 You found Tranzig in Feldepost's Inn. Here you get another lead  a map of the bandit campsite. You, of course, went there. You went through a huge part of the region to get there,defeating countless bandits, animals and monsters on your way. You grew stronger. There, in one of the tents, you came across important people of the Iron Throne, a powerful merchant organization based in Baldur's Gate. The leader escaped, but the rest fought back. However, none of them survived. And the lead pointed to the Cloakwood Forest.

The path leading through the Cloakwood Forest wasn't the easiest  you faced overgrown spiders, wyverns, druids, wild animals. Finally, you reached the Dwarven mines. The mine was leased from the dwarf clan by the Iron Throne. You discovered this after talking to one of the last representatives of this clan. You helped him free the other prisoners. You confronted Davaeorn, the organization's emissary. After the battle, you found further evidence linking the Iron Throne to the misfortunes plaguing the Sword Coast. You sunk a mine and headed for the Baldur's Gate.

You are finally here. You have reached the most important place in the Sword Coast  Baldur's Gate. However, you don't get the time to enjoy the sights  you almost immediately got the job from a Flaming Fist officer named Scar. After entering through the gate, you are greeted by none other than Elminster. He advises you to rely on both Scar and his superior, Prince Eltan. 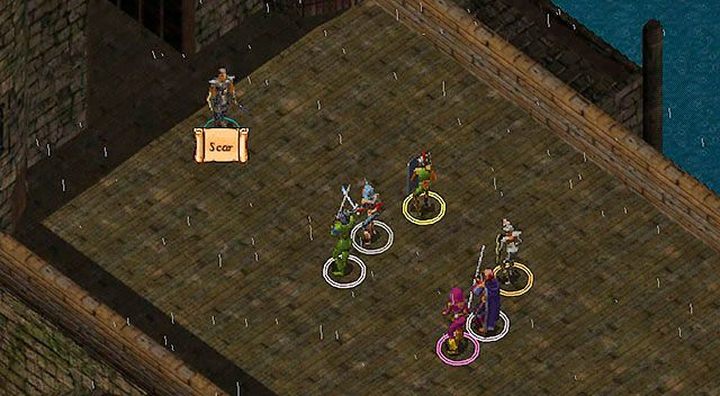 By following Scar's orders, you broke through the city's sewers. Then you have contacted with Eltan and started investigating the Seven Suns merchant organization. It turns out that the guild members are impersonated by doppelgangers  shapeshifting beings who can perfectly impersonate anyone. Having dealt with this problem, you have finally moved to the headquarters of the Iron Throne in the hope that you will find definitive evidence of the organization's connection to the recent iron crisis. After dealing with the defenders, some of whom were the doppelgangers, you discover that the rulers of the Throne have gone to Candlekeep. With Eltan's blessing, you went to your old home...

The story goes round, with the team landing at Candlekeep. You are getting closer to the confrontation with the leaders of the Iron Throne. The path wasn't easy. Old friends behaved strangely, and you knew that there was danger within the once safe walls. Emissaries of the merchant organization waited on one of the upper floors. On your way up, you came across the sage Alaundo's prophecy about Bhaal's plan, his descendants and his return. You also found a letter that completely changed your life. Turns out you are the descendant of Bhaal. You have the blood of a god. Hence the dreams. And the death that follows your every step. And that was just the beginning of the path made of dead bodies.

Before you finally get upstairs, you meet the mysterious Koveras, who pretended to be Gorion's friend. He expressed regret for his loss and gave you a ring. Upstairs, you met the leader of the Throne, Rieltar. This is one of those encounters that could have ended in various ways. After confessing to the guild master that you were the ones who thwarted their plans  you could have threaten each other and walked away  or start a fight. Either way, when you tried to leave this place, you were charged with murder and placed in custody.

You were saved by Tethtoril, one of the tutors of Candlekeep. He made you realize that Rieltar's adoptive son, Sarevok  the same one who pretended to be Koveras  was behind all of this. He opened a secret passage to a labyrinth built under the library. There you faced various nightmares like Basilisks, doppelgangers impersonating Gorion or Elminster, as well as another mercenary assassin. Eventually, however, you found the exit.

The next direction seemed obvious  Baldur's Gate. You got there while evading Flaming Fist patrols. However, you were detected in the city itself. However, you got the chance of running an investigation. You have reached the home of Prince Eltan, who has been poisoned. You discovered that the doctor who was looking after him was actually just trying to hasten his death. Fortunately, you acted in time. You also found evidence incriminating Sarevok, who... was preparing to become the new prince of Baldur's Gate and sit on the Council of Three. The assassins lurking in the sewers had an invitation to the coronation.

You barged into the ceremony, and showed the evidence in front of everyone. You also learn that Sarevok has killed Gorion  he arrived at the ceremony in his characteristic armor. After the battle, Sarevok was saved by his old master. They both teleported somewhere. You found your way to his hideout, the Temple of Bhaal, located deep beneath the city. That's where the final confrontation took place. 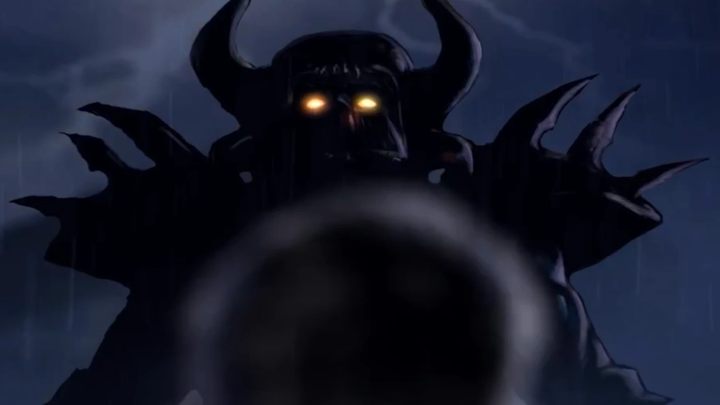 It turns out that Sarevok is your half-brother, a Bhaal's child, who was much more accepting of his father's legacy. He planned to drown the Sword Coast in blood in order to achieve ascension and become the new Lord of Murder. Your efforts have thwarted his plans. Now all it was left to do was to fight and finish the job. The battle was demanding  Sarevok wasn't alone. However, eventually, he fell mortally wounded. You became heroes of the city. But that was just the beginning of the problems...

Plot summary of the expansions

These are several additional side adventures that take place before the end of the seventh chapter. They have no impact on the ending. However, they provide some interesting challenges and some good loot. During them, you will confront eccentric mages, hunt werewolves or finally discover the secrets of a dwarf fortress.

This expansion was created and released by Beamdog. It serves as the missing link between the two parts of Baldur's Gate, introduces a new antagonist, and shows how the Baldur's Gate hero ended up in a mysterious dungeon far from home. It tells the story of our hero's fight with Caelar, a revolutionary who managed to gather followers, now marching to fix the world. Our main causes of joining the battle were the assassins sent after us and Imoen's injuries. What's more, the whole is being watched by a mysterious, powerful mage who seems to be testing ours and Caelar's abilities.

It is eventually revealed that Caelar wanted to free a close family member imprisoned in hell by the demon Belhifet (the main antagonist of Icewind Dale) because of a sin the woman committed in the past. Bhaal's child defeats the demon, frees the prisoner, and Caelar can sacrifice herself to stay in hell and guard the passage to Faerun. During the celebration, our hero witnesses the murder of the daughter of one of the princes of Baldur's Gate. We are framed by the mysterious wizard. Bhaal's child is forced to flee. After that, we and our faithful companions are ambushed.