On this page of our guide to Baldur's Gate 3 you can read about the land in which this role-playing game takes place, about the major cities and locations that we have seen in previous Dungeons & Dragons installments and the world of Forgotten Realms depicted in the Baldur's Gate series. We will take a closer look at some of the most important geographical regions and cities available in this fantasy world. The plot of the first part is corresponding to the titular city, while Baldur's Gate 2 takes players to the neighbouring city of Amn. Part three goes back to its roots, but we won't immediately land in the most important metropolis of the Sword Coast.

The world of Forgotten Realms is vast, consisting of many states, principalities and even underground cities or mazes. It's a place full of magic, filled with amazing things and ancient creatures. Entire manuals for subsequent editions of Dungeons & Dragons have been dedicated to describe this world. That's why prefer to focus on some of the key realms we've visited in the Baldur's Gate series and other Black Isle and Bioware RPGs (Icewind Dale, Neverwinter Nights). Some of them are likely to return in Baldur's Gate 3, so it's worth being prepared for the trip.

The Sword Coast, which we first encountered in Baldur's Gate, is the western land of Faerun that has access to the Sea of Swords. This land is full of forests. There are many ruins, abandoned villages and mysterious places to explore. The trails and paths of this natural landscape aren't among the safest as they may be occupied by wild animals, bandits, hobgoblins, gnolls, kobolds or orcs. These creatures are perfect opportunity for a novice adventurer to sharpen a new sword. However, they may pose a real threat if you encounter them in groups. Despite some crises, the region was famous for its rich iron deposits and developed marketplaces. In the northern part of the Sword Coast you will find the city of Waterdeep and the southern part of Sword Coast borders with Amn. 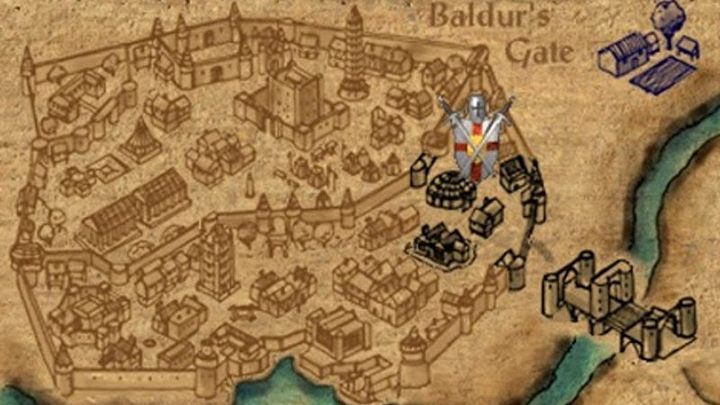 It's the main headquarters of authorities of the Sword Coast. The most important parties and factions of the country (including illegal ones such as the Thieves Guild) have their headquarters here. The same goes with trading guilds, mage guilds and, of course, The Flaming Fist - an organization controlled by the princes who govern the city and have great impact on the Sword Coast region. You will find a harbour, various temples and a Mage Tower (or even two towers), warehouses and factories. Legends also mention that there is an ancient underworld beneath the city, which is connected with its history and mysteries.

Important cities and locations of the region

Land of merchants and traders, bordered to the north by the Sword Coast, to the south by Tethyr, to the west by Sea of Swords and to the east by the Shinning Plains. For those who are brave it's a place of great possibilities, and for the careless  a nest of vipers, where every step may be dangerous or even lethal. Adventurers will find picturesque cities and towns in this region, elven forests and metropolises, as well as mysterious ruins, tombs and ancient temples. This land is full of mysteries and unique factions. We can visit Amn in Baldur's Gate 2 Shadows of Amn.

It's not without a reason that people call Athkatla the 'city of money'. It's a rich metropolis, with dozens of politicians, adventurers, merchants, noble citizens and other sort of individuals. You may even come across visitors from other dimensions. High stakes games take place here, thousands of gold pieces fly from hand to hand, and every district hides a secret. Somewhere in the shadow of beautiful palaces, slave trafficking is being carried out. To make things worse, in the city dungeons we may encounter a mad cult, where a sadistic soul-less mage is conducting his terrifying experiments. But on the surface, there's also plenty of things to watch or admire. The rich citizens have grand mansions, churches of various gods reach the sky, and merchants gather up to trade on the magnificent Waukeen Promenade. After all, the hero of Baldur's Gate 2 takes his first steps there.

The darkness can be vibrant too. It can be filled with quite different forms of life than the ones we know from the surface of Faerun. Often more cruel creatures reside this place, but they also have consciousness.

Underdark is a place where many beings took refuge, such as: the warrior race of Githyanki, the multi-eyed observers and tyrannical Mind Flyers (we will find out more about them in Baldur's Gate 3, but they already caused a lot of pain in Baldur's Gate 2), the duegars (Underdark dwarves) and finally the drows - the dark elves that can be considered, at least to some extent, as the main residents of this place.

In a nutshell, Underdark is an underground network of tunnel-connected caves and subterranean structures stretching virtually under the whole region of Faerun. All aforementioned creatures have decided to reside here. And many more. There are many passageways (caves, portals) that can be used to enter the Underdark. But you do it at your own risk. We have been visiting Underdark in many games set in the Forgotten Realms universe, namely: Baldur's Gate Siege of Dragonspear, Baldur's Gate 2, Neverwinter Nights, and Icewind Dale 2.

Related cities and lands which were mentioned in Baldur's Gate: