Back 4 Blood Guide by gamepressure.com

This page of the guide to Back 4 Blood lists of available characters in the game. Every one of them is different, not only in appearance, but also in their abilities that significantly affect the gameplay. 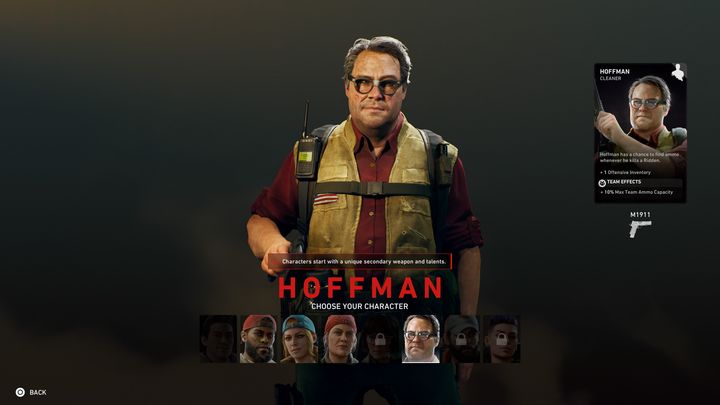 Hoffman is a team-supporting character. His team perk gives all players 10% of the maximum ammo. When it comes to personal perks, Hoffman has a chance to find ammo every time he kills an enemy. Additionally, he can take one more offensive object (such as a grenade) than others.

It may seem that you will always have a surplus of ammo and won't need any additional perks for it, but in fact, you may often find yourself out of ammo. That's why Hoffman's perfect for the team.

Doc is another supporting character. As his name suggests, Doc specializes in healing. Once per level, he can patch up each player, restoring 25 health points. Additionally, this character's own healing is 20% more effective.

His team drum gives 25% resistance to trauma. This is a really worthwhile team perk, because trauma is not so easy to cure, and untreated trauma can be very problematic.

Evangelo is better for a solo player. He doesn't offer much to the team. His team perk is 5% of the team members' movement speed.

As for his personal perks, Evangelo can get out of the opponent's grip once every 60 seconds without the help of a companion or a special object. Additionally, he can do so 75% faster than others. His strength is renewed 25% faster on top of that. He doesn't offer too much to the team, but is very useful for solo players.

Holly is a defensive character meant for close-combat. Instead of a sidearm, she has a melee weapon. As for her personal perks, Holly restores 10 stamina points when she kills a Ridden. Additionally, she is 10% more resistant to damage, which makes her slightly more resistant than others.

Holly's team perk increases the maximum stamina of each team member by 25 points. If you like close encounters with zombies, or you want a more resistant character, Holly will be a good choice.

Jim is the most offensive out of all characters. The main reason for it is that the precise kills (e.g. headshot) give Jim 5% more damage. This bonus stacks up to 50%, but all stacks are lost when you take any damage. Jim also has a 25% faster aiming speed.

As for team perks, each team member deals 10% more damage when attacking the enemy's weak spots. This character is perfect if you want to focus mainly on damage. Remember not to get hit, though!

Karlee senses "hazards", i.e. traps or other dangers. In addition, she has one more slot for quick items such as a defibrillator or an ammo bag.

When it comes to team perks, Karlee gives each team member a 25% bonus to using items.

Mom is a character focused on helping the team in terms of health and extra lives. This character can immediately revive a knocked down character, but can only do so once per level. Additionally, she has one more slot for healing items.

Her team perk allows you to gain one more team health. Thanks to this character, you will have an extra chance in case you die too many times.

Walker's an offensive character. Precision kills give Walker a 20% accuracy bonus for 5 seconds. The meter resets every time Walker commits a precision kill. Additionally, he deals 10% more damage than other characters.

This site is not associated with and/or endorsed by the Warner Bros. Interactive Entertainment or Turtle Rock Studios. All logos and images are copyrighted by their respective owners.