In ATOM RPG, you get skill points by reaching new experience levels. Each level gives you 3 points which can be put into various skills. 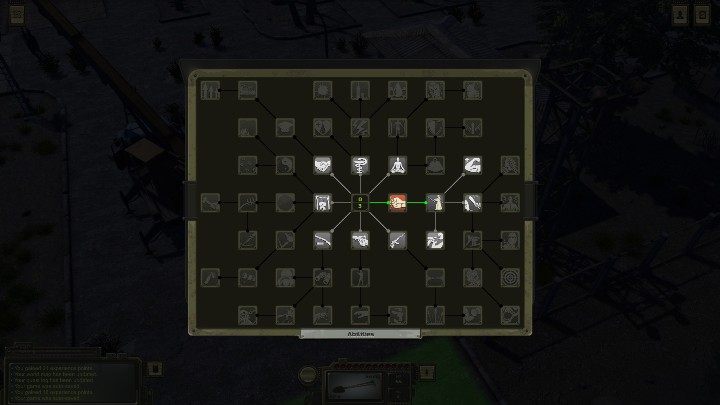 Fisherman - increases your chance of catching a fish.

Effective Training - get +20% experience after completing a quest.

Blaster master - +30% to blast radius, helpful when you are using grenades.

Supplier - +10% chance of meeting a caravan.

Gun Jesus - if you are proficient in crafting, this skill is for you - increases the damage of your crafted weapons by +20%.

Hands of gold - increases your chances of crafting an item by 100%.

Witcher - deal twice the damage to animals and monsters.

Cat's Eye - you have the same chance of hitting your target during day and night.

Gunslinger - +10 to Pistols and SMGs.

Monster Lore Expert - you learn more information about monsters. This affects the combat and resources you can get from them.

Manhunter - the damage dealt to humans with firearms.

Self-sufficient - your character will never get addicted.

Duelist - +15 damage when you and your enemy are both using a pistol or an SMG.

Liver of steel - you won't get addicted to alcohol.

Armor of God - +20% resistance to getting knocked down.

Think like the enemy - damage resistance increases with every attack inflicting 4 or more damage.

Poison Ivy - when you get poisoned, you regenerate health points instead of losing them.

Shield Master - no negative effects while using a shield.

Quick Regeneration - your body heals itself at critical moments, +2HP if your current amount of health points is less than a half.

Shieldbearer - +50% chance to block an attack with a shield.

Ninjutsu - 25% chance not to be spotted.

Adrenaline Rush - when your HP is reduced by a half, you get extra 2 Action Points.

Butcher - no debuffs or negative effects on point-blank shots.

Master of Unlocking - you will always open a lock that has a lower level than yours.