In ATOM RPG you have to create your hero before the game starts. You can choose his appearance, name and write his biography. Other things you need to determine are characteristics, skills, and distinction. Hero's features can be adjusted during the game by creating new items or using them.

How to create a character? 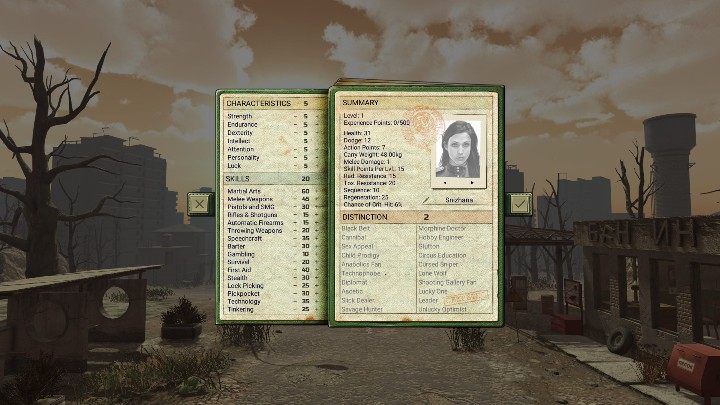 When you create a hero, you can select his appearance. However, it does not affect character statistics. When you choose the appearance of the hero, give him a name, and if you feel like you can even write their bio. 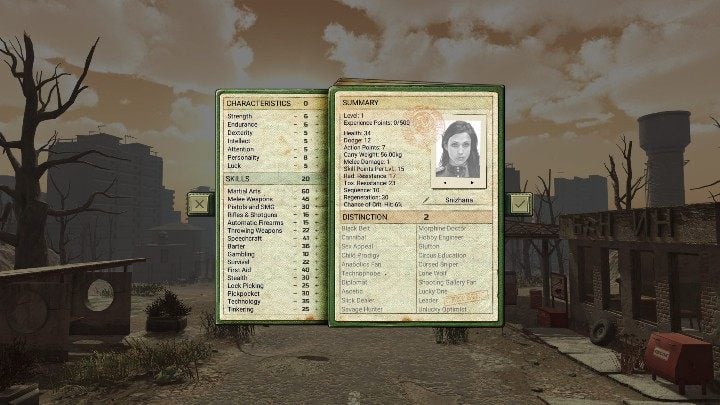 All statistics are influenced by the choice from the distinction category. You can choose between two hero qualities. Once you have chosen them, give away your character's points and character's skills. 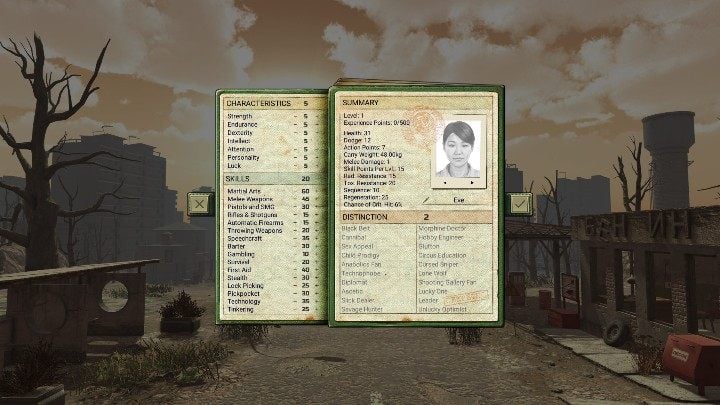 Remember! Each feature can have a maximum of 11 points and a minimum of 1. You have 40 points to distribute. These features do not interact directly with each other, so you can freely change the number of points.

The ideal character for the first game should have as many points as possible Luck, Endurance and Attention. This gives you a better chance of being successful in the game.

Luck: influences every action in the game.

Attention: affects the accuracy of firearms and helps to see details that you could otherwise easily miss in dialogs and the environment.

However, if you want your character to be very brave from the beginning and deal with enemies with strong blows, increase Dexterity and Strength points.

Strength: affects Carry Weight and the strength of melee attacks.

If solving problems with fists or weapons is not your style at all, focus on features such as Intellect and Personality. 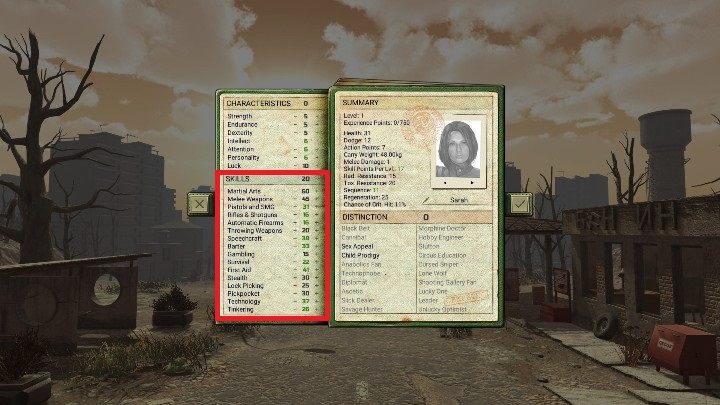 Most skills are regulated by the choice of distinction. However, you can hand out 20 points to each skill in order to increase their strength in the game. At the very beginning, it is best to invest in the skills listed below.

Influence on gameplay: regulates the strength of your blows and kicks.

This is a very important skill for the very beginning of the game. In the first moments of the game, you will have to protect yourself from your opponents with your own fists. Until you get the weapons, they will be your only resort.

In the first hours of the game, you will spend a lot of time trading. In this way, you will be able to gain new items and weapons that will help you survive in difficult conditions.

Influence on gameplay: this skill allows you to collect resources in the game world and makes it easier to avoid fighting.

At the beginning of the game, you will fight for every element of consumption, because your character will quickly become hungry. An important skill is, therefore, survival, which makes it easier to obtain raw materials and avoid fighting.

While exploring the world, you may encounter many enemies, some of them may seriously injure you. If you develop First Aid you will be able to heal your wounds.

Influence on gameplay: affects the opening of locks.

Facilitates opening castles and acquiring new items at the beginning of the game.

Influence on gameplay: allows you to create items.

At the very beginning of the game, you will have access to more plans so that you can create more items. 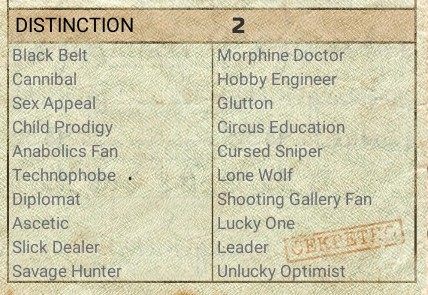 While playing ATOM RPG you can choose two features from the distinction category, they influence the character stats and special features of the game. At the very start, the best features will be those that facilitate survival, reduce hunger and give resistance to toxic substances.

Below, you will find features that will have a good influence on your initial ATOM RPG gameplay.

Influence on gameplay: you can skin animals without using a knife; +20% damage to the animals.

Effects on gameplay: resistance to radiation and toxic substances.

Influence on gameplay: you are rarely hungry.

Influence on gameplay: you start the game with basic recipes for creating items;

Influence on gameplay: you are more likely to bargain for a better price.