Freeport is the starting location in the Atlas game. It is here that every player sets his/her first steps, acquires first crafting materials and discovers the secrets of this vast and demanding product. However, once a character advances to level 8, a problem appears - further development of a character becomes impossible until the said character leaves Freeport and enters a new location. How can it be done? 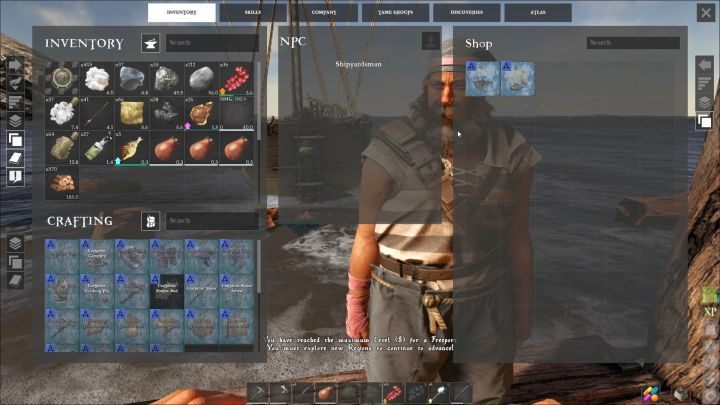 You need to create your first ship to leave Freeport.

The solution to this problem is quite simple - need to create your first ship, allowing you to leave Freeport. In order to do so, you can unlock a specific ability (Shipwright from the Seamanship skill tree), allowing you to construct ships on your own. During the first hours of the game, however, it is not worth to spend precious ability points into unlocking that skill. Instead, you can head over to the Shipyardsman that can be found in the Freeport - the man will be standing at the bridge. Initiate a conversation with the sailor and two blueprints will appear on your screen - the one to create a Raft and another to create a Ramshackle Sloop.

The Ramshackle Sloop is without a doubt a better choice out of the two options - it requires more work, but the ship will be much easier to handle at sea and will provide much better protection to the player. In order to create this ship, you must collect the following resources: 225x Fiber, 75x Hide and 250x Wood. Once that is done, you need to head back to the Shipyardsman. Unfortunately, accumulating and moving with so many resources will over encumber your character. You do not need to worry, however, as it will not hurt the character itself, it just causes him/her to move slowly. Collect the required resources and travel to the sailor. Initiate a conversation again and "purchase" the ship you want to create, causing it to appear at the end of the bridge. 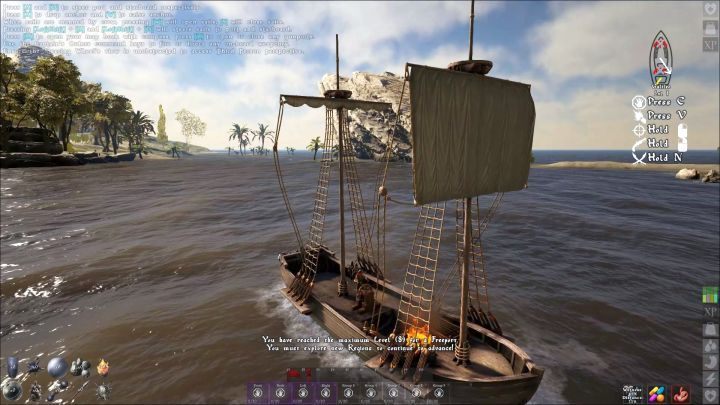 Once the ship is ready, you need to sail towards the new land.

Once the ship is ready, climb up the ladder located at the rear end of it to reach the deck. Afterwards, spread the sails and interact with the rudder to take full control of the ship. A miniature of the ship, along with the white arrow representing the wind direction will appear on the screen. To move as efficiently as possible, you will need to position the ship in such a way that the wind will be blowing from behind (the arrow will be pointing upwards).

Once everything is set up, you need to point the ship in any direction and just swim straight ahead. Your goal for now is to leave the sector you in which you are currently located - this can be checked by opening the map (M). Once you reach a new sector, swim through it until you see the outline of the land on the horizon and direct the ship towards it. When you reach the land, fold the sails to prevent the wind from pushing your ship out to the open sea and jump off the deck to discover the new land. This will automatically unlock further character development. You can reach more locations using the very same method.

Note - when travelling through the seas, watch out for enemy ships patrolling the water. It is generally a good idea to stay away from them - they will not chase you unless you get too close to them. Also, remember to prepare the appropriate supplies before the trip - 2-3 full Waterskins, 20 pieces of cooked Animal Meat and Fish Meat and about 100 fruits. You should also stock on some Wood, Stone and Fibers to be able to repair the ship if needed or place and lit a fireplace to warm up the character. Finally, remember to place a bed on board - once done, you will be able to respawn your character on board of the ship, right next to the bed, saving time.