The following guide to the Atlas game is a compendium about this difficult and complex production, thanks to which every player starting his/her adventure in Freeport will find answers for the most bothering questions. The guide starts with starting tips and the descriptions of basic gameplay mechanics, where each player will find the information needed to begin the game. Here you can find, among others, the explanation of hunting, equipment and carry weight mechanics, as well as information about the stats and abilities available in the game, coupled with the recommended development path.

The guide includes an extensive FAQ section, where players can find answers and solutions to the most difficult problems awaiting for the inexperienced player - methods of accumulating water, the most effective character development, leaving the Freeport starting location or the methods of acquiring the first tools. Here you can also find a chapter devoted to improving the performance of the game. The guide closes with the Annex section, where you can find information about the system requirements and whether your PC will be able to run the game smoothly, as well as a table presenting all of the controls used on the PC and Xbox One versions of the game.

Atlas is an extremely ambitious pirate MMO game, created by the co-developers of ARK: Survival Evolved, allowing up to 40,000 players to play on a single, gigantic map. The Atlas allows the players to explore a vast world of thousands of square kilometers, where you can find geographically diverse - both in terms of climate, as well as flora and fauna - islands. The game lets players to build their own fortresses and ships, conquer territories and join companies, atlas guild counterparts. The action takes place from the first and third perspective and players can only play on multiplayer servers, both in PvE and PvP modes.

Before starting your adventure with Atlas, we recommend looking through basic tips for the start. They will allow you to painlessly enter the world of this massive and difficult title, explaining the most important mechanics governing the gameplay. Here you can find, among others, the information on how to collect resources more effectively or how not to get into a dangerous situation.

The tips for the start are as follows:

Here are the chapters describing the basic mechanics governing the gameplay. Here you will find, among other things, an explanation of the hunting, equipment and carry weight systems, as well as the information about the character stats and abilities available in the game, along with the recommended character development path.

The FAQ section of the guide, in which we answer any questions that may arise during your adventure with the Atlas game. From here you will learn how to increase the efficiency of obtaining crafting materials, how to successfully develop your character, what to do in order to develop your character past level 8 or how to get out of the starting location, Freeport.

The part closing the guide, in which you will find the description of controls for both the PC and the Xbox One versions of the game, as well as the hardware requirements for all available platforms.

About ATLAS Guide and Tips 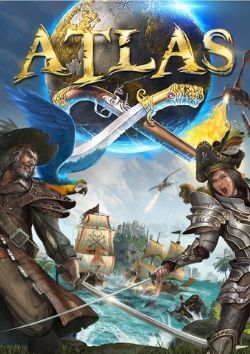 Pirate MMO, which was created by developers of ARK: Survival Evolved. The game was announced at The Game Awards in December 2018, but its first trailer leaked into the web almost six months earlier.

ATLAS is an extremely ambitious pirate MMO that allows 40,000 people to play at the same time. Together they travel through a huge map of the world, showing tropical archipelagos, cities, ancient ruins. Adventure from creating your own character, using dozens of options offered. We start the game modestly, recruiting the crew (also controlled by AI), collecting resources and building the first ship. Over time, we can gain control over a small territory, and then fight for influence with other pirate teams, loot their treasures and gain forts. The action is observed from the first and third person perspective. The game offers an extensive hand-to-hand combat system, hundreds of unlockable skills, dozens of weapons and beasts, including dragons and powerful crackers. The title supports fashion and allows you to host your own servers with unique gameplay rules.