This page of the Astro's Playroom guide provides information about fighting T. Rex from the 1994 Throwback level. 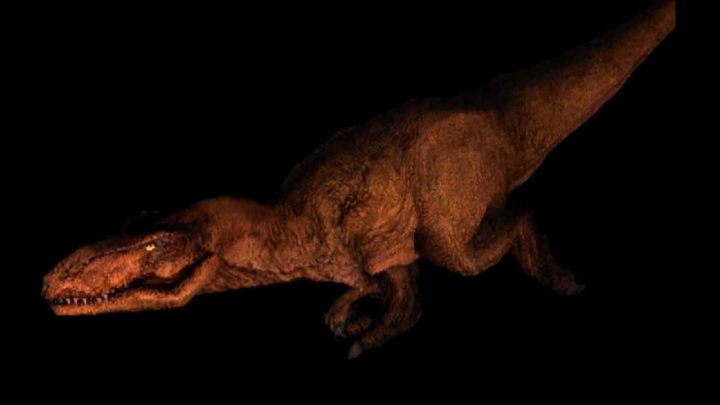 After you have completed all the main locations in the game, you will unlock the secret level: 1994. The entrance to this level is located on the lower floor of the CPU Square.

1. stage of the fight 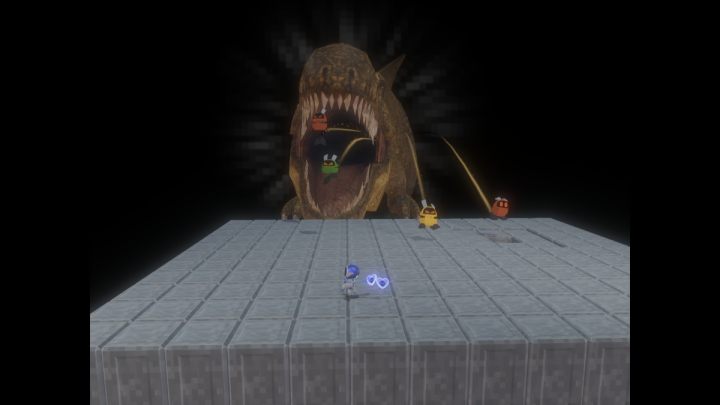 Upon entering the arena, Astro will receive 2 Hearts. This means that you can take up to 2 injuries. This will be very useful, because the fight is quite long and T. Rex can perform many different attacks.

The boss will start by spitting a few common enemies into the arena. Defeat them quickly with ordinary punches or by using leg lasers. 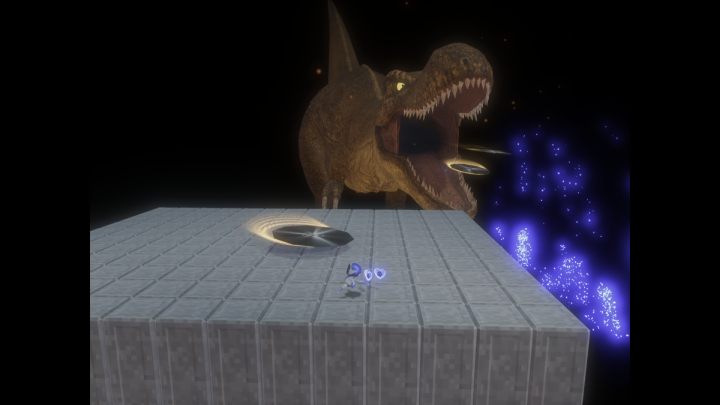 Then the plates will fly in your direction. Run away or jump over them. 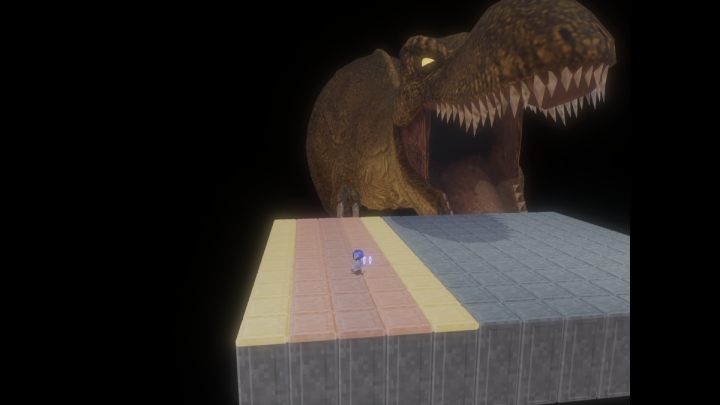 Now you'll face a slightly more difficult task. T. Rex will start biting the arena. The area that is about to be bitten will be highlighted in yellow and red. 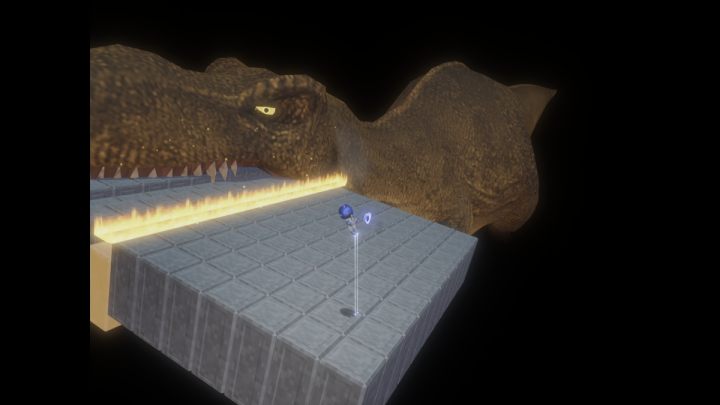 After 3 bites, the boss will begin to tilt the arena and will release a shock wave towards you. Be careful not to fall from the arena. Jump over the yellow oncoming wave. 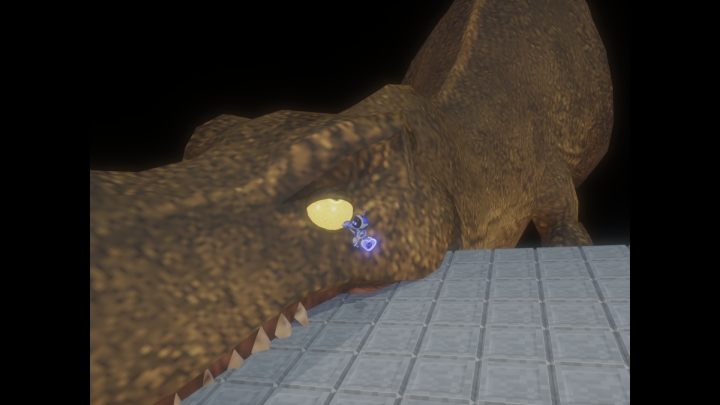 If you survive all his attacks, T. Rex will get tired for a second. Run quickly to him, jump up and hit him with a standard attack in the eye. 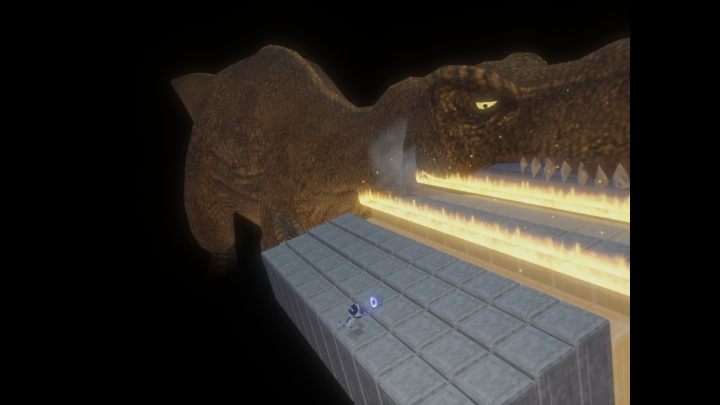 T. Rex will start all attacks from the beginning. It will attack you with its tail, spit out a few enemies into the arena, and then the disks will fly in your direction. At the end, he will again bite the platform, tilting it and this time releasing several shock waves.

Survive all the attacks and wait until he gets tired. Run up and hit him in the other eye.

2. stage of the fight 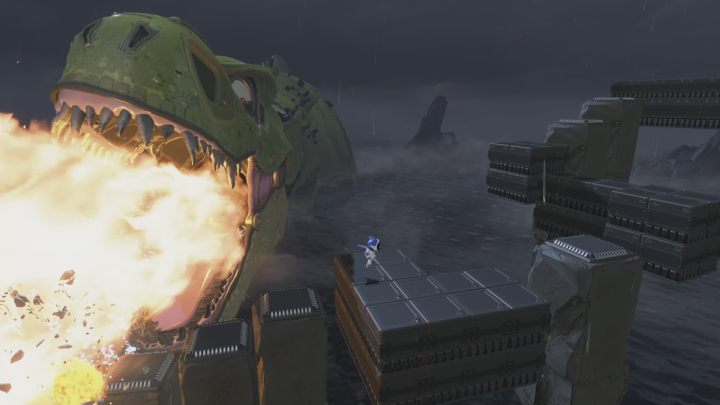 In the second stage of the fight, T. Rex in the new graphic version will start to breathe fire. Run upstairs to the higher platform to get away from the flames. 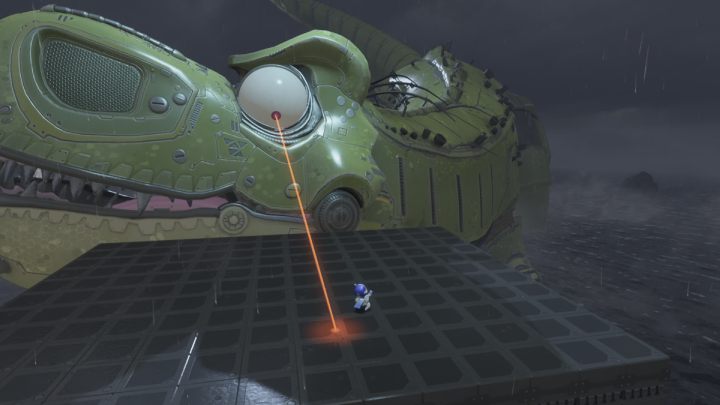 First, the boss will point a laser at you. 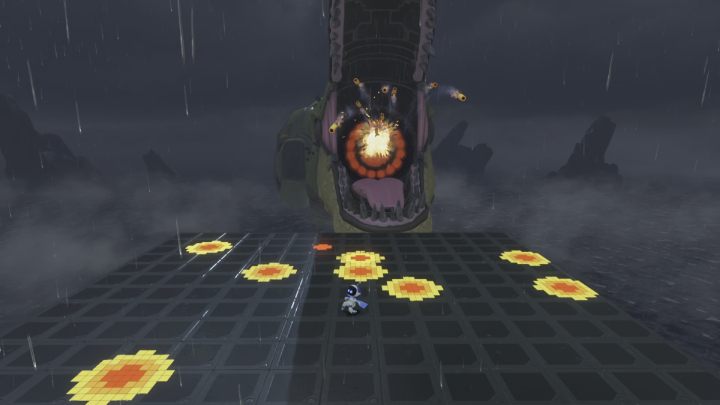 Then the missiles will fly in your direction. Be careful not to get stuck in the corner of the platform and do not run into a flying missile while using leg lasers. 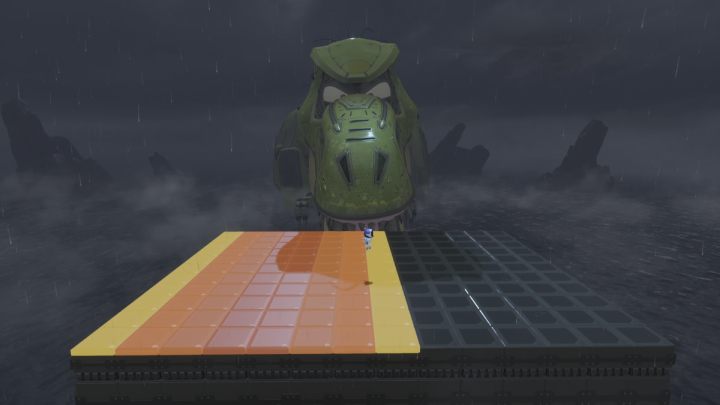 T. Rex will start to sink his teeth into the arena again. This time he will bite a much larger area, so run away quickly to avoid getting impaled on his fangs. 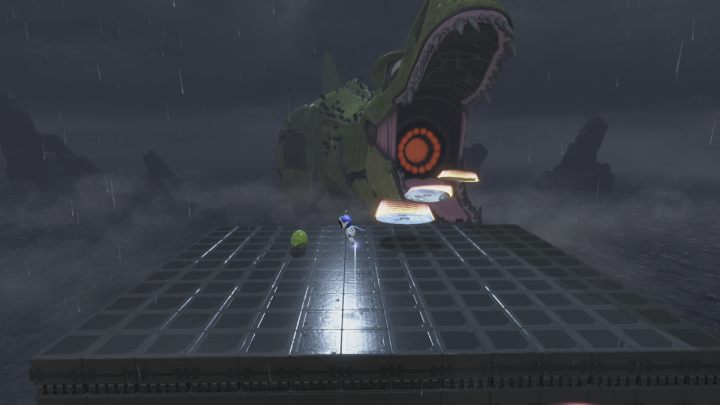 The boss won't give you a break. He'll spit out a few regular opponents, and then the plates. Kill all the enemies on the platform and don't get hit. 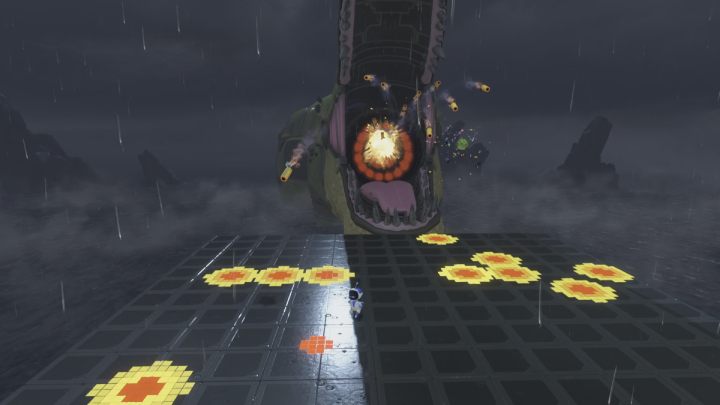 Then again, you'll have to run away from a wave of bullets and blows dealt with a tail. 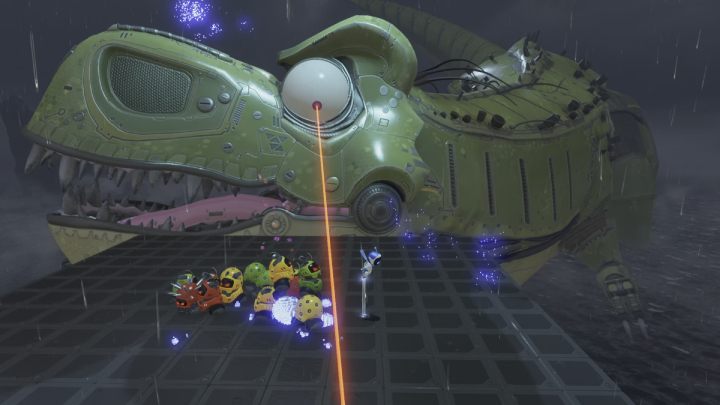 Once again, enemies will start to spawn in the arena. There will be more of them this time. What's more, T. Rex will again start tracking you with a laser. Fortunately, the beam from his eye deals damage to other enemies as well.

Defeat them all with ordinary blows or leg lasers. 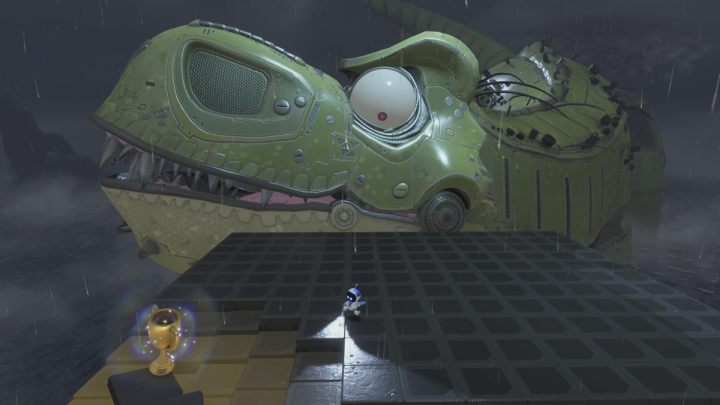 After defeating all the opponents in the arena, T. Rex will continue to use lasers in his eyes. After a few beam hits, you will hear a sound. This means that the last beam caused a larger explosion and exposed a hidden object under the arena. Pick up the Gold Cup quickly by pressing the Square and throw it at the boss. 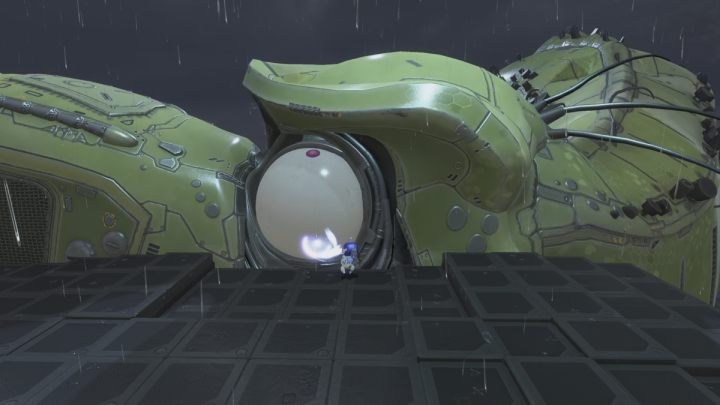 The knocked down T. Rex will lose consciousness for a second. Run up to him and hit him repeatedly with a simple attack on the eye. 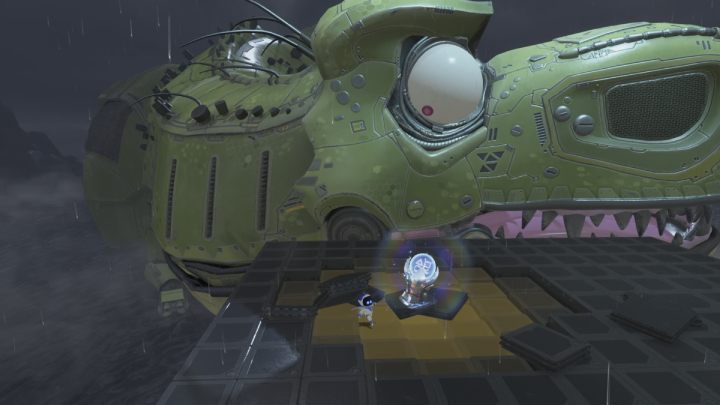 After a while, T. Rex will get up and start laser-tracking you again. Another explosion will reveal the Platinum Cup. Pick it up, throw it at the boss and then give him a few blows in the eye. 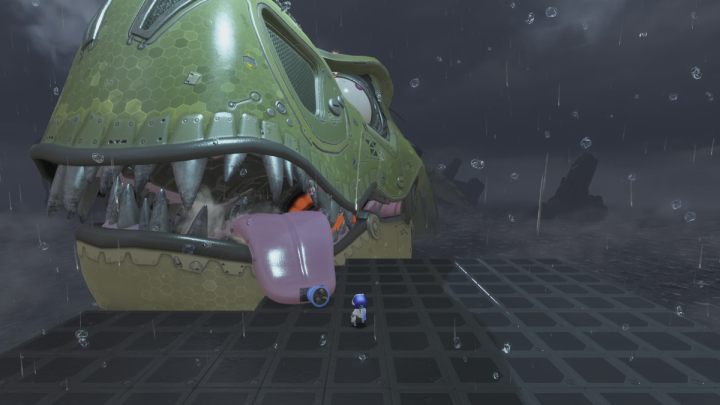 At the end, grab the blue cable on T. Rex's tongue and keep pulling it until you finish off the boss.