This page of the Astro's Playroom guide contains a walkthrough of the Raytrace Ruins level in the GPU Jungle. You'll be able to collect all 4 puzzle pieces and 2 hidden artefacts: PS VR Processor Unit and PlayStation Vita. You will also learn how to unlock the Ready for the Proving trophy. 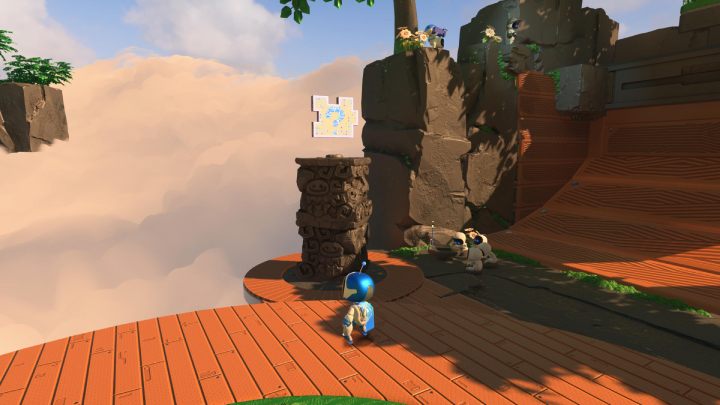 Pull the cables on the right side of the island. A tall column will emerge from the ground. Enter the circular platform, defeat all the enemies and jump to the column to get the 1st puzzle piece. 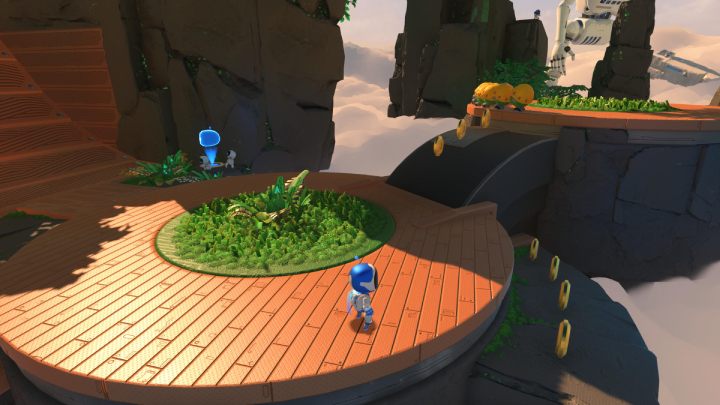 Search the area thoroughly. You will find a few coins near the circular platform. 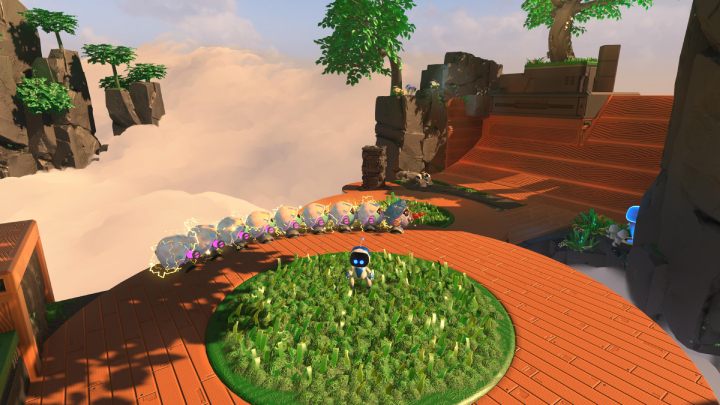 Jump on the next platform, watching out for marching enemies. They go in circles, one after the other, and will electrocute from time to time.

Defeat them with the use of lasers in your legs or with a simple blow, just remember to move away from them for a while when they stop. After winning the fight, you will get 8 regular coins and 1 big coin! 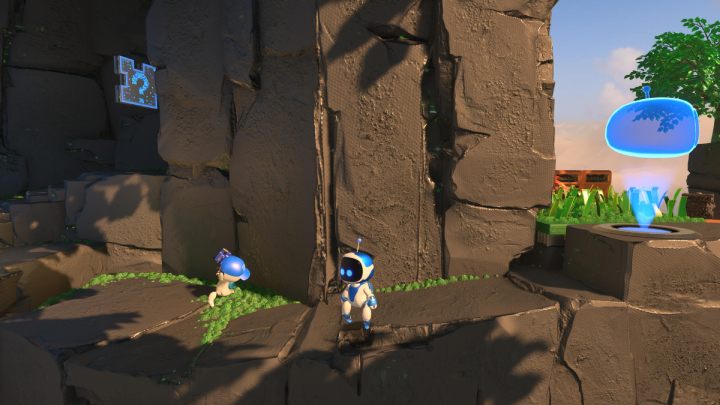 Jump from the platform to the checkpoint and look into the hidden cave on the left. The 2nd puzzle piece will be floating above the rocks.

Go back to the checkpoint and pull the cables over the wooden platform. 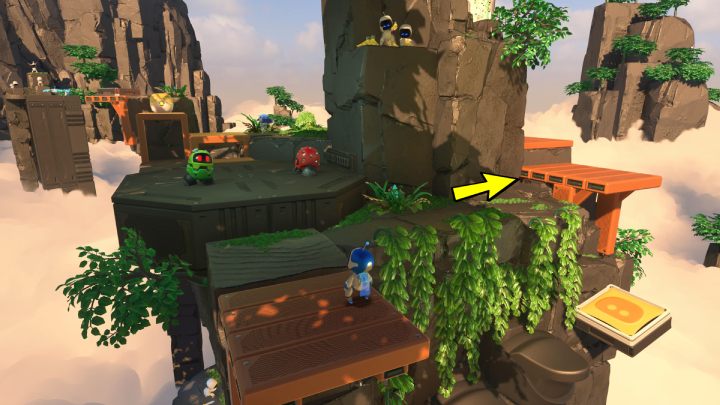 Jump up the stairs onto the yellow trampoline, which will lead you to the next area of the island.

Before you deal with next enemies, go up the wooden stairs on the right side of the screen first. At their end, under the cables, there is 1 artefact: PS VR processor module.

Use the stairs to return to the main road and kill the enemies. 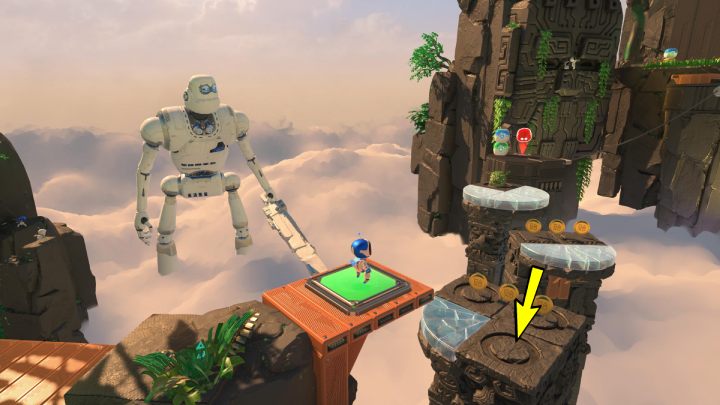 Take the coins from the container, and then go onto the red button. 3 columns will jump out of the clouds in front you, which will lead you to the next checkpoint.

Aim to land on the rock floor of the column since the laser in your legs will break the glass floor, which can make you fall into the abyss. 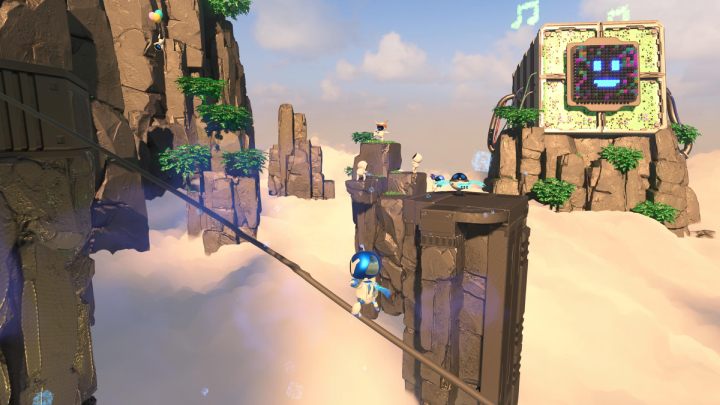 While following the cable, turn the camera to the right, a strong gust of wind will make the cable stick out. This will allow you to jump to a nearby small platform. 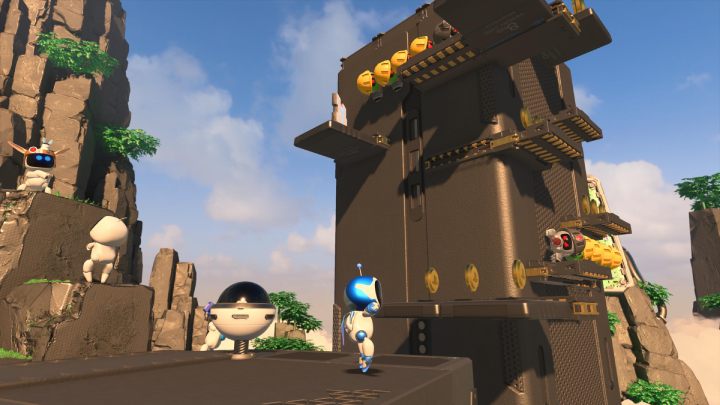 Hit the flower with a spin attack. A grey column will rise in front of you.

Jump up the stairs to the higher levels, watching out for enemies walking in line. Try to avoid them or kill them with lasers in your legs. 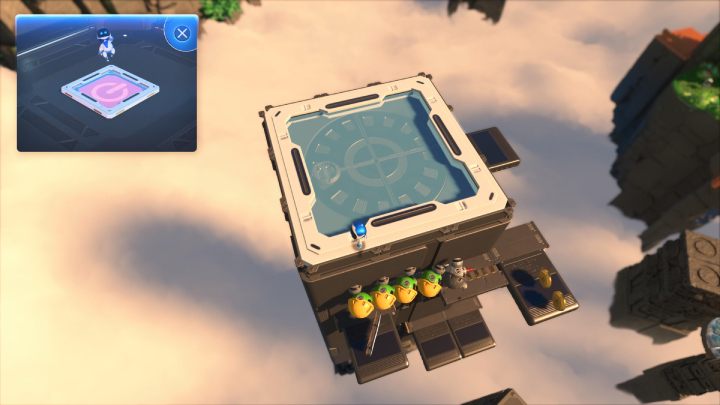 Climb to the very top and wait for the enemy to pass, then quickly jump on the step with the 3rd puzzle piece. Jump back up and smash the window. Pull the PlayStation Vita out from under the cables.

Then enter the yellow trampoline, which will take you to the next area. 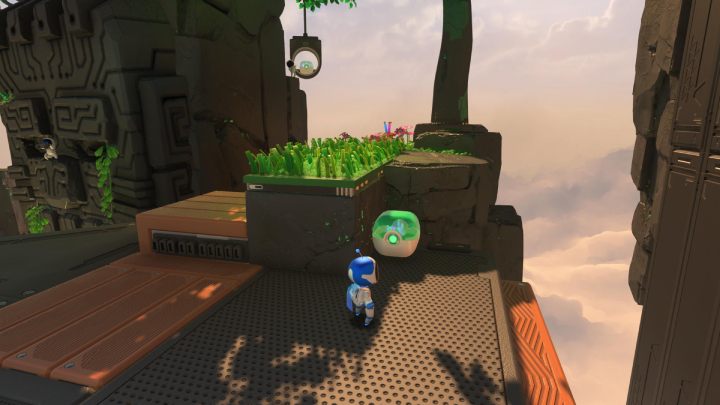 Defeat flying enemies and collect coins from all containers. By the tree, under the cables, there is a box with an arch. You pull the thread by pressing R2, you aim with the right analog stick.

Shoot down a green coin container hanging in the distance. 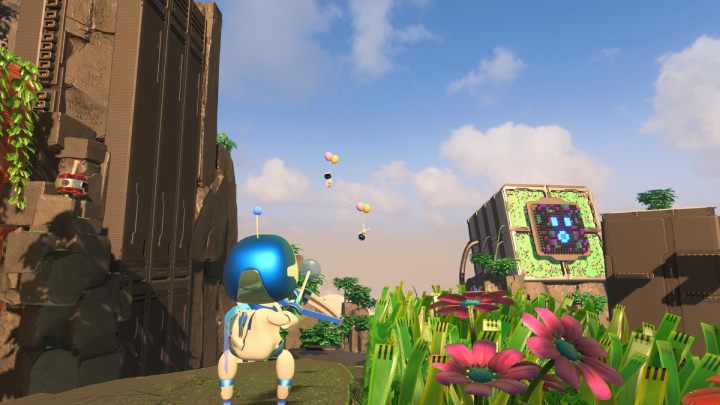 You can also get some coins by shooting the bots with balloons. 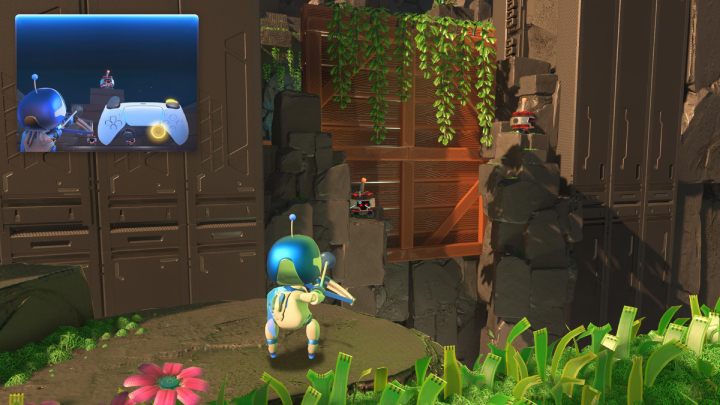 You'll see a wooden bridge in front of you. You have to shoot down all 4 enemies walking on the rocks to go to the next area.

Ready for the Proving trophy 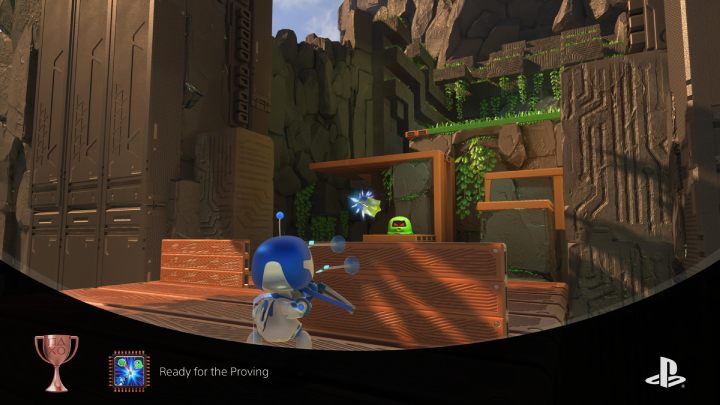 Climb the bridge and shoot down all spitting enemies while hiding behind a wooden shield.

If you hit a spitter's projectile with an arrow, you will get the Ready for the Proving trophy. 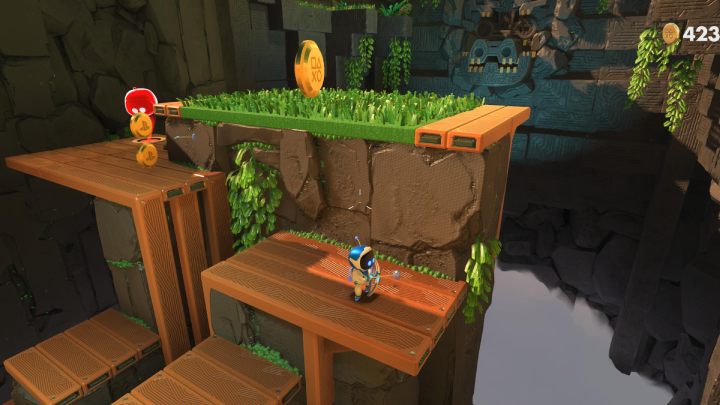 Climb the wooden stairs to the last checkpoint on this level, where you will fight with a boss.

Fight with the dragon 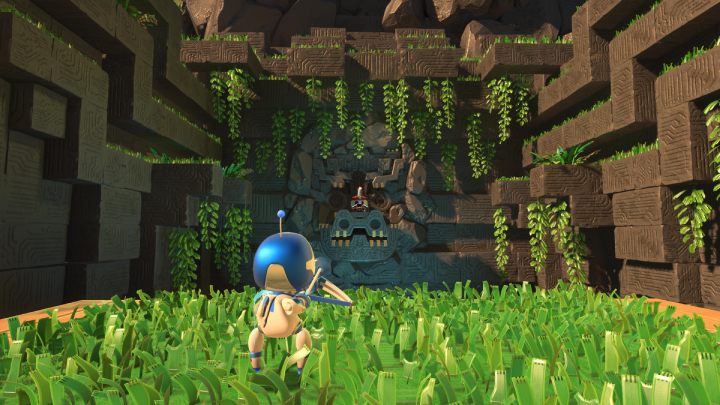 Shoot down the enemy standing on the snout of the rock dragon to start the fight. 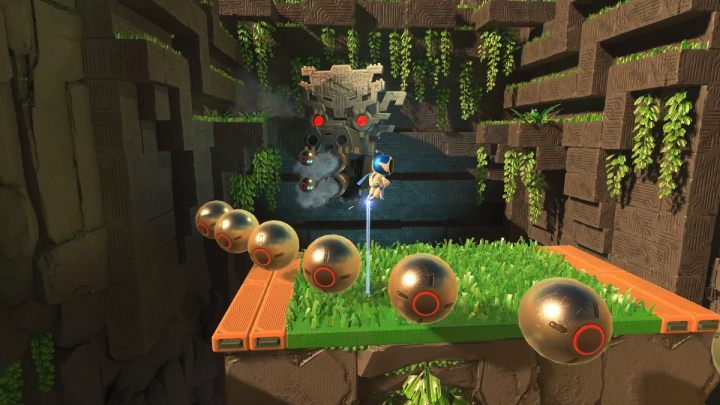 The dragon will shoot cannonballs at you. Use lasers to fly over the balls or slide between them. 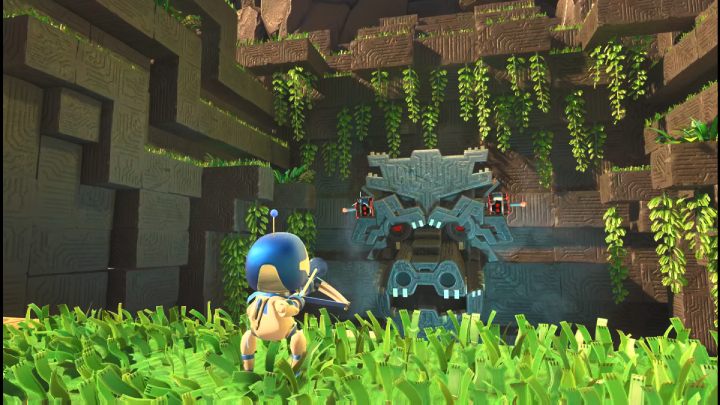 Shoot down 3 dynamites to defeat him. 2 dynamites are on his ears, the last dynamite will appear in his mouth. 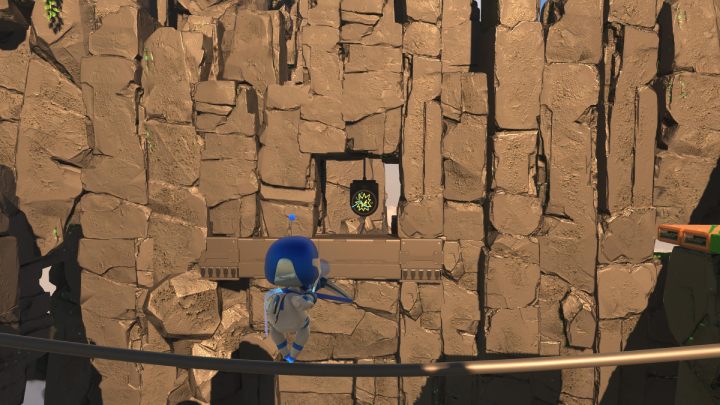 If. for some reason, you have lost the bow, there's a hidden box with a bow next to the previous checkpoint, under the cables.

Follow the long wire and turn the camera to the right. Shoot the element hanging between the rocks. 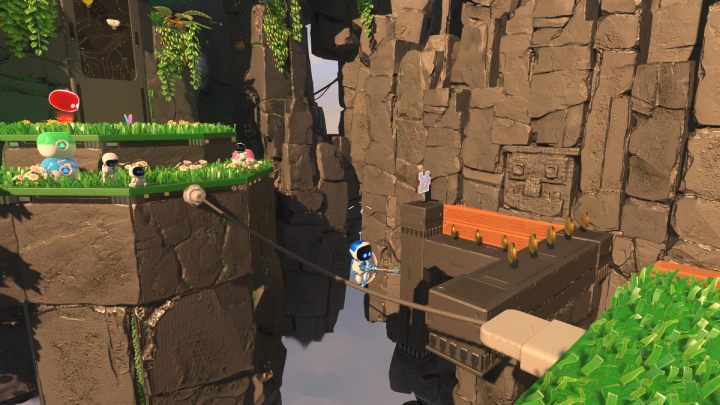 Jump from the cable to the gray, longitudinal platform and take the 4th puzzle piece. Jump back onto the grass and follow the wire to the next level.