The following page of the guide to Astro's Playroom describes the walkthrough of the Bot Beach level in Cooling Springs. Our tips will help you collect all 4 puzzle pieces and the 2 hidden artifacts - the DualShock 3 Wireless Controller and the PS Eye Camera. You will also learn where to get the Hell Diver trophy. 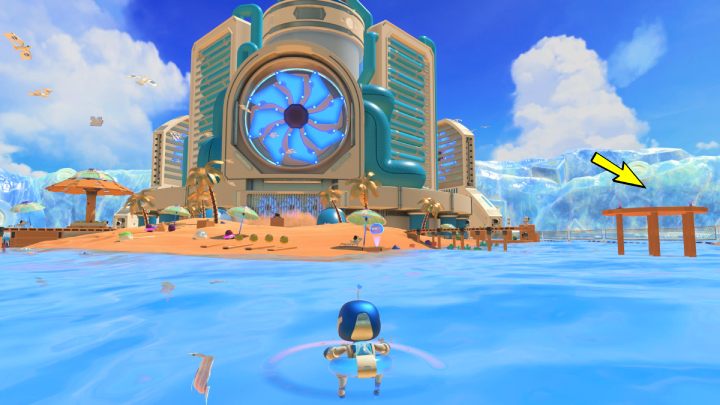 Slide down into the water and swim to shore. Enter the pier next to the checkpoint and jump to the round board platform. Pull all the wires out of the floor to get some coins and the 1st puzzle piece. 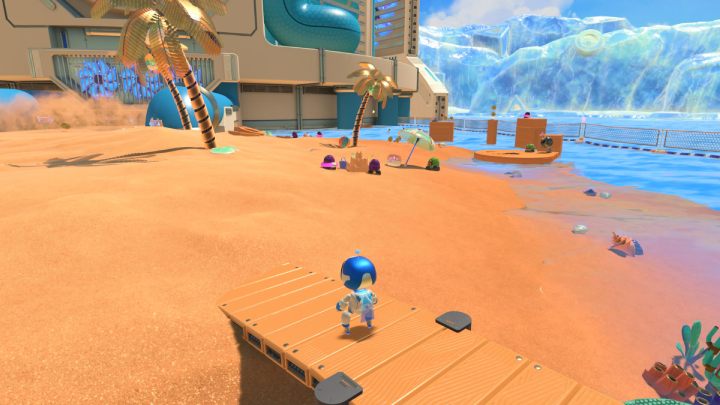 Go back to the island and defeat several enemies near the sand castle on the right side of the island. Collect the canisters which lie on the ground and hit the palm trees. More canisters are hidden between the palm leaves. Then, eliminate the enemies located on the boards floating above water. 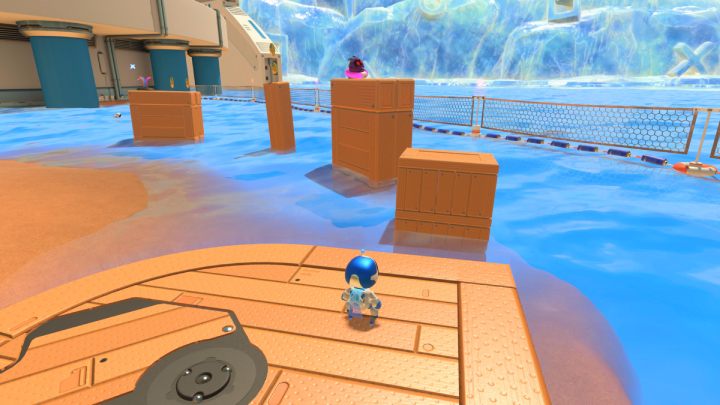 Jump on more canisters until you reach the last one. The 1st artifact - the PS Eye Camera - is hidden under the wires. 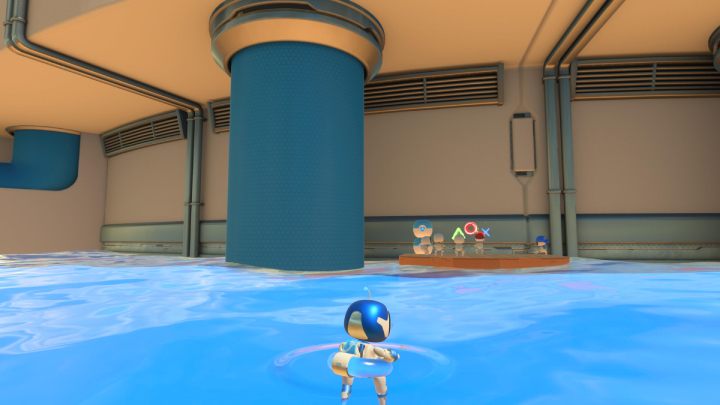 Jump into the water and swim to the coin canisters. Then go back to shore. 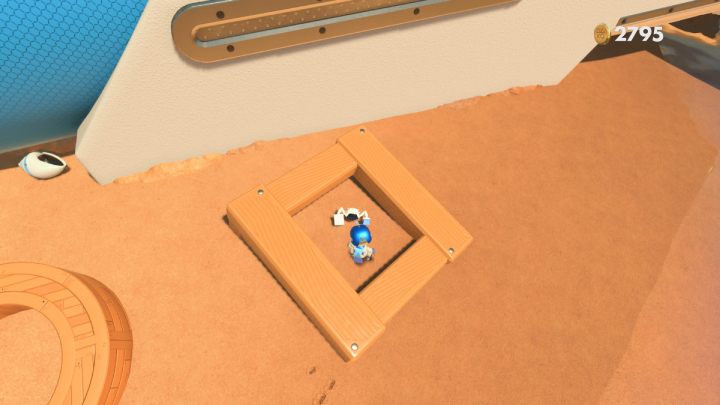 Eliminate more enemies standing near the big blue pipe. A crab-shaped bot hides in one of the sandboxes. Hit him a few times to get some coins.

There's a bunch of crabs all over the beach. Hit all the animals you encounter in the game to earn extra coins. 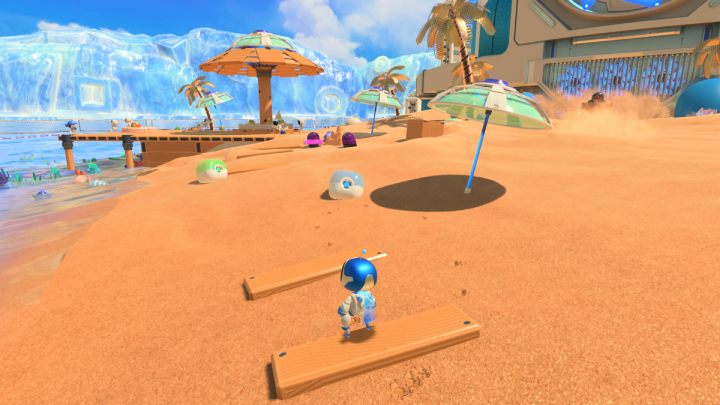 Go back to the checkpoint and collect the coins from the blue and green canisters. Then, defeat the enemies walking near the sand castle. 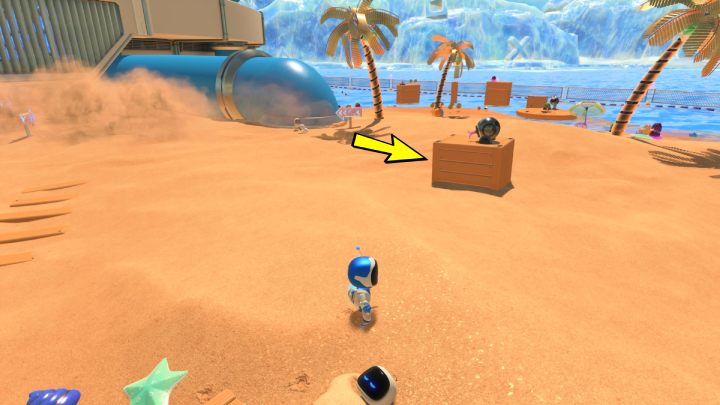 Look around and locate the chest on top of which there's an enemy with wires sticking out of his head. Approach him to draw his attention. The enemy will charge at you and try to jump on you to electrocute you. Move away from him to a safe distance and return when he's stuck in the sand. Pull his wires to eliminate him. Then circle around the chest that he stood on. The 2nd puzzle piece is hidden inside. 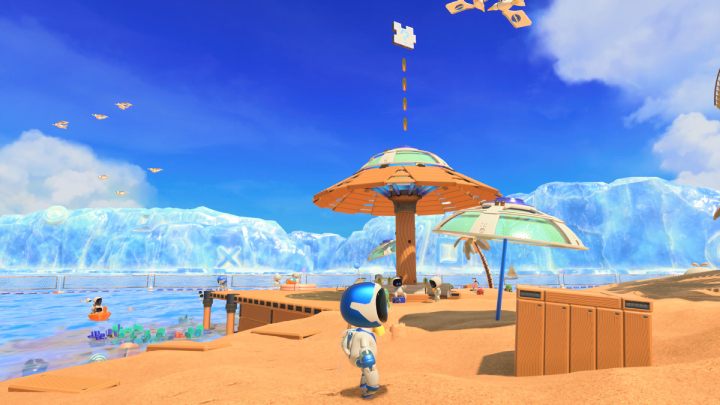 Near the shore there is a large umbrella with some coins and the 3rd puzzle piece floating above it. Jump on the box, and then on the green umbrella which holds a small trampoline that will propell you high into the air, so that you will be able to get on the big umbrella. 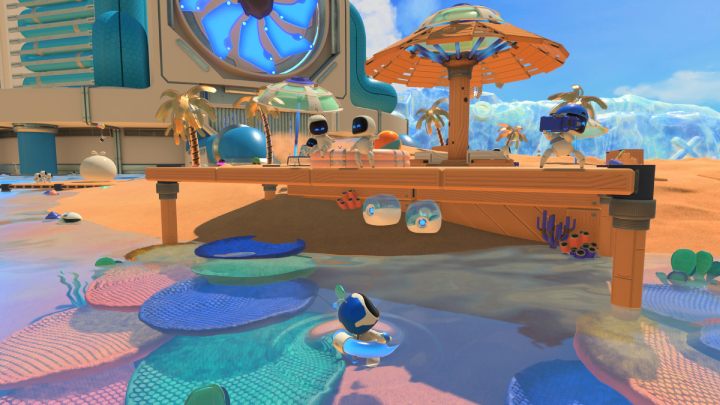 Jump off the umbrella and collect the coins that lie underneath. You will find 2 canisters under the pier. 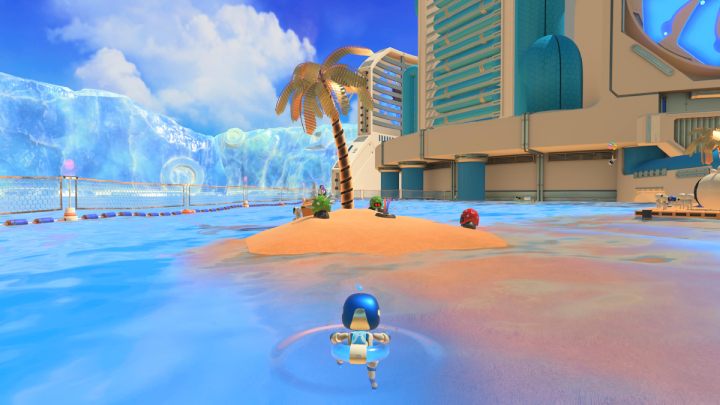 Swim to the island with a palm tree on it and defeat all enemies. The 2nd artifact - the Dualshock 3 Wireless Controller - is hidden under the wires.

There's also a toucan-like bot nearby. If you hit it, it'll drop a coin. 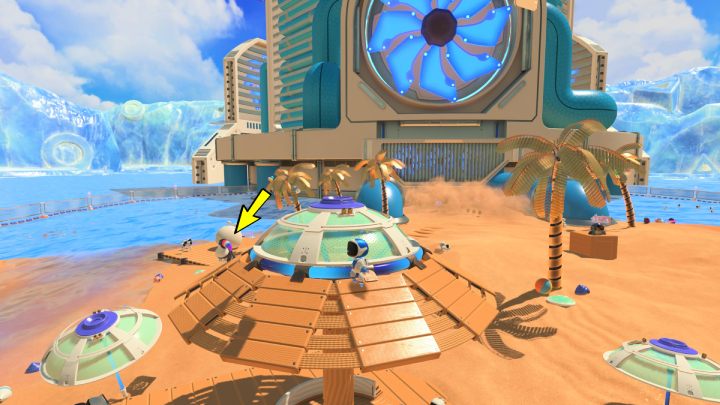 The scared bird will fly away onto a large umbrella. Return to the island and jump on said umbrella to hit the toucan again - this time, it will drop a few coins. 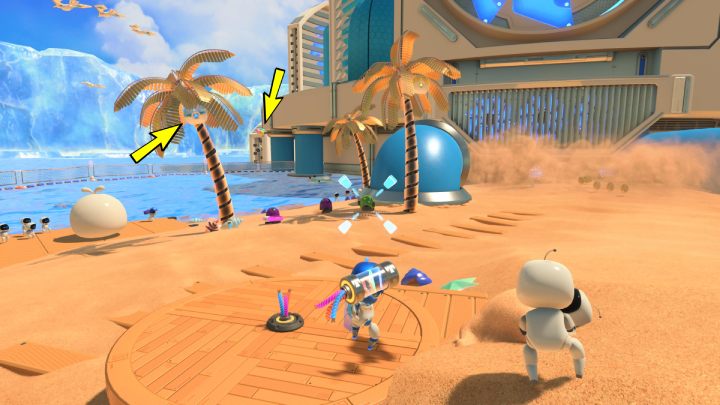 Near the umbrellas you will find some protruding wires stuck in wooden planks. An item will fall out of them, which you can throw at nearby enemies.

Remember that after the first throw, the rest of the enemies will charge at you. Defeat them all, then drop the canisters from the palm trees and shoot down the flying balloon bot. 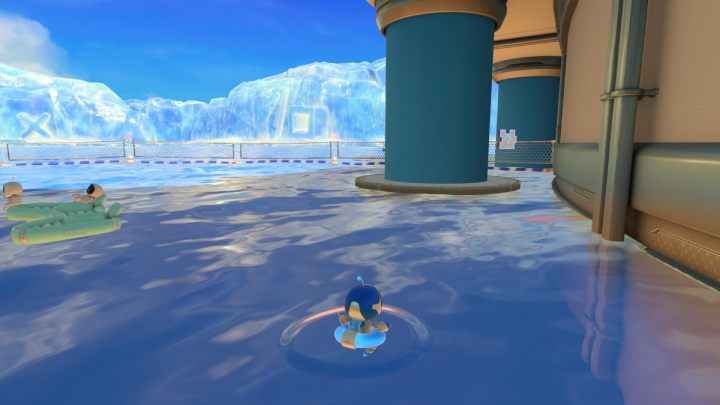 Go into the water between the palms and swim to the canister located on the raft. The 4th puzzle piece is hidden behind the blue column. 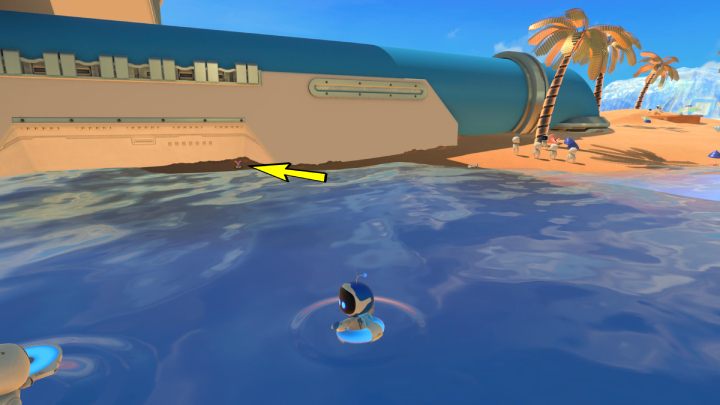 There are wires sticking out of the sand near the big blue pipe. When you pull them, a few coins will appear. After you collect them, you will have completed all tasks available on the island. 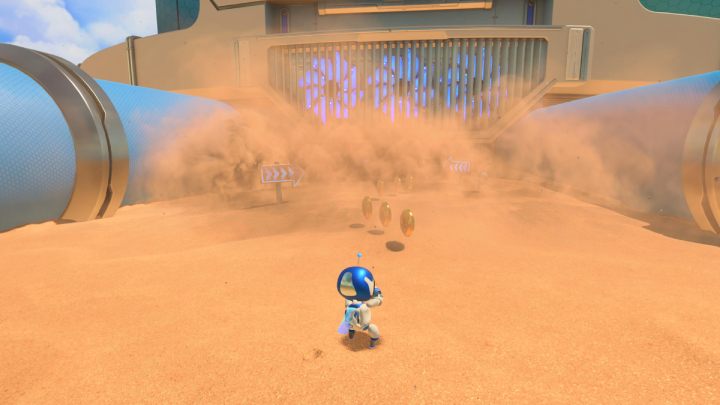 Enter the sandstorm between the blue pipes. The coins will lead you to the next checkpoint. 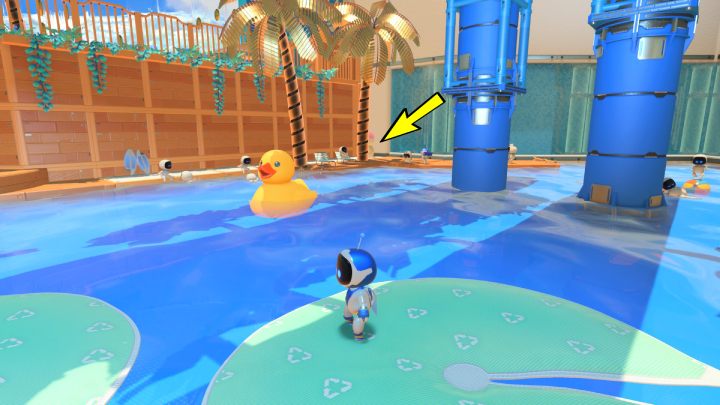 Collect the coins from the palm leaves and then swim to the right end of the pool. You'll find 2 coin canisters. 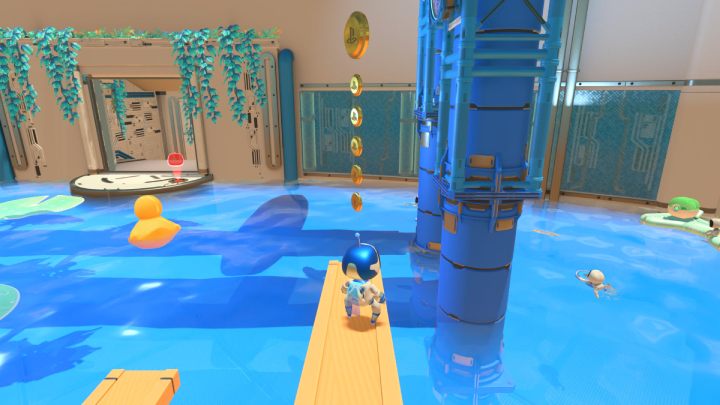 There are 3 trampolines on the other side of the pool. Jump from one trampoline to another until you reach the highest one, and stand at its edge. Press the X to bounce high off the board and jump into the water. Astro will dive, performing a few somersaults, which will get you the Hell Diver trophy.

Swim to the green raft to take the coins from the canister and leave the pool. The next level will begin when you approach the wires in the floor next to the showering bots.