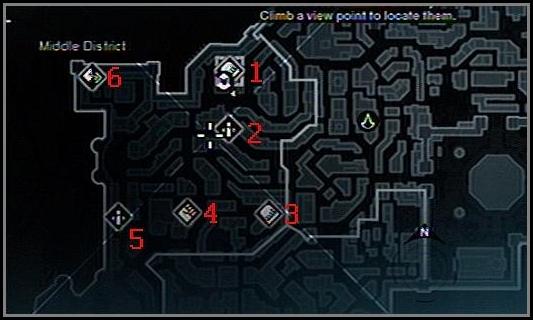 Tasks in the Middle District of Jerusalem.

1. Pickpocket. Your target is in the little fortress in the northern part of the district and you will have to eliminate the guards to pickpocket. You will learn the positions of guards during the burial ceremony.

2. Informer. In exchange for eliminating 5 targets you will learn that servants of Robert are very skillful and prepared.

3. Pickpocket. A stolen document reveals a place where Robert will be staying during the ceremony.

4. Interrogation. Thanks to the interrogation you will learn that Robert wants peace and that's the reason he is participating in the ceremony.

5. Informer. In exchange for killing two targets (one of them is on the roof), you will receive a piece of advice: you are able to get close to Robert using scholars.

You will quickly understand why Robert isn't shouting like a real male knight with a pot on his head. Whoever he is you need to kill his servants first. You can fight at the graveyard where you will constantly get hit by arrows or you can run and defend yourself on the rooftops. Both ways are dangerous but you should win eventually. Use counter attacks as much as possible.

Update: If you are low on health and almost close to dieing withdraw from the fight and run in circles in the graveyard, it is 90% chance that the enemies will follow you in a circle and won't act smart and try to cut you off. It gives you some time to recharge your health (Atleast get a few health bars back) and then enter the fight again and try to slash as much as possible and when you are low on health try that again. This gives you also the chance that the archers won't hit you. Even when you fight in the graveyard they are poor shots and tend to miss you or hit your enemies (friendly fire :) ). In my oppinion DO NOT try to run into the streets and roofs, because in the graveyard you'll only facing knights, but in streets and roofs's you'll get seriously outnumbered, because everyone thinks that you are a good way to practice fights :P. And also you can fall from roofs and loose lives. So stick with the gravaeyard (I actually found this out after dieing like 5th time).
(submitted by: zupzu)