In Assassin's Creed: Odyssey, you can spend points to unlock new abilities. Each experience level gives you 1 ability points. This section includes our suggestions which abilities best to unlock at the start of the game, namely between levels 2-10. The list shows a number of important abilities that significantly make it easier and more pleasurable to fight, sneak and keeping your character alive.

Note - In the later stages of the game, the ability points can also be acquired by exploring tombs. More information on that can be found in Unlocking abilities and Tombs chapters within this walkthrough. 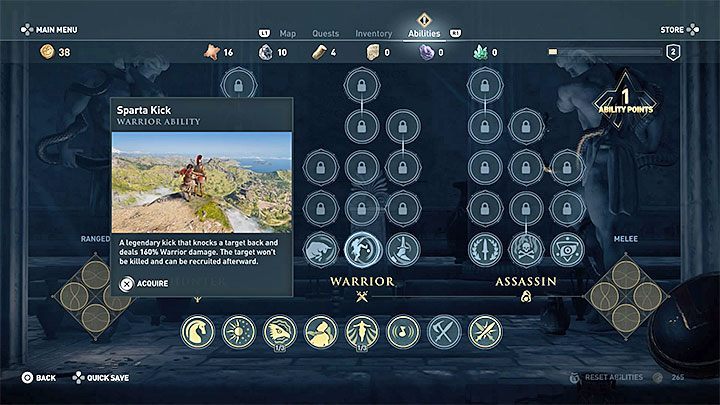 Level 2: Purchase an active ability Bull Rush that allows you to perform charges in order to weaken and knock down nearly every encountered enemy. Nonetheless, you have to make sure not to miss and waste precious adrenaline segment.

Level 3: Unlock the Sparta Kick active ability, as it is useful to eliminate opponents. It is best used when kicking enemies off high ledges. You can accomplish that during open combat or after you sneak up on one of the enemies.

Level 4: Unlock the Predator Shot active ability that increases the usefulness of the main protagonist's bow by inflicting more damage on enemies that would not be killed with a single shot. An additional asset is the ability to control the shot arrow if needed.

Level 5: Unlock the Second Wind active ability. This is absolutely a top priority purchase as this ability allows you to immediately regenerate a portion of your health bar - it proves extremely useful in all difficult battles, as you can save your character from dying.

Level 6: Unlock the Rush Assassination active ability. This powerful skill allows you to attack your targets by surprise. Your character "teleports" to a selected opponent and after killing him "jump" onto another target. In some cases, this ability allows you to kills two guards next to each other.

Level 7: Unlock the Shadow Assassin passive ability - it is extremely useful for sneaking, as after getting behind an enemy you can mount a strong attack. Similarly to Predator Shot, the chance that the enemy will after the first blow increases.

Level 8: Unlock the Weapons Master passive ability. After you do so, your character will inflict more damage and will more effectively eliminate opponents in melee combat. The difference is significant, as even in its basic form it differs by 20%.

Level 9: Unlock the Venomous Attack active ability. It allows you to put a "poisoned" effect on your opponents which results in them slowly growing weaker and losing health. This ability is very useful against strong enemies.

Level 10: Unlock the Devastating Shot active ability. Similarly to the Predator Shot, this ability increases the damage inflicted with a bow. It is worth to have both these ranged combat abilities set to active and switch between them when necessary.