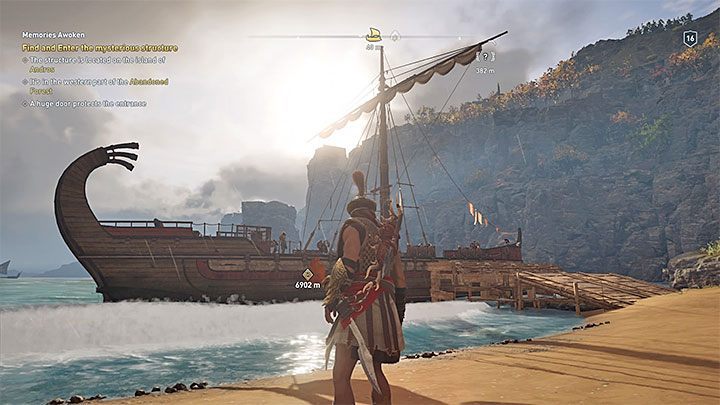 Adrestia is the most important ship in Assassin's Creed: Odyssey - its importance comes from the fact that after a few starting missions the ship will be yours. You can use it to travel around the entire world, complete naval contracts or attack other ships. This page contains information on how to participate in naval battles, how to upgrade Adrestia and how to recruit new crew members (lieutenants). 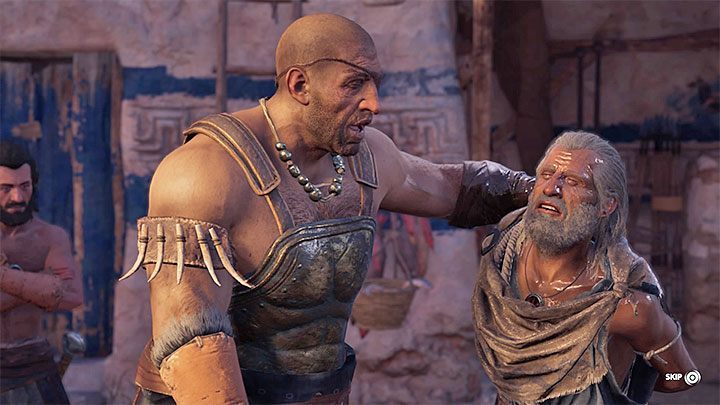 You don't have to wait too long to get your own ship. This happens about 60-90 minutes in after starting a new game, before you leave the starting location, Kephallonia. Follow the main storyline until you get The Big Break main quest.

During this quest you have to meet with a ship builder and then deal with Cyclops, a powerful mercenary who threatens the locals. Reach the village marked by the game and participate in a fight with Cyclops and his men. Defeat the mercenary. 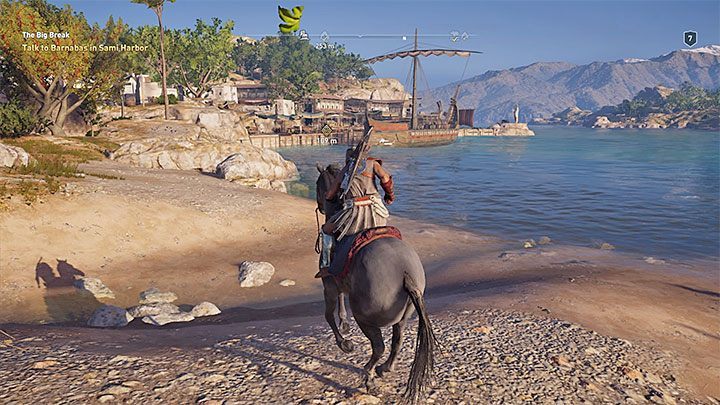 After that you have to reach Barnabas and free him. Escort the man and then talk with him. You learn that Barnabas is the captain of Adrestia. However, the man will gladly make you the owner of the ship.

Reach harbor in Sami, Adrestia is docked there. You can now sail from Kephallonia - this marks the end of the first chapter. 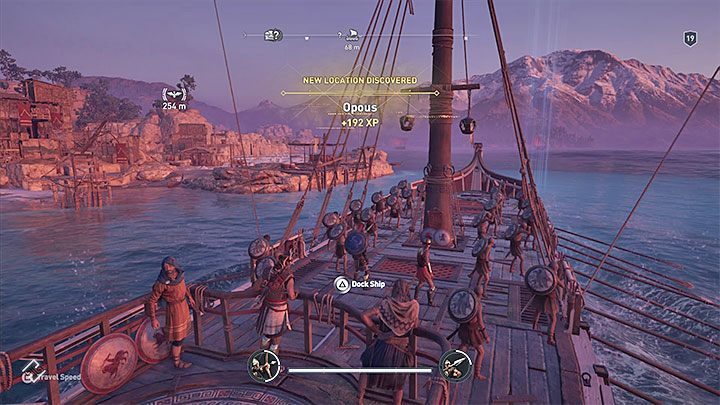 In theory, Adretia allows you to travel to any place in the game. However, keep in mind that every region in the game has a suggested experience level. Sailing closer to a high-level region may lead to a situation where your ship will be attacked by a very powerful unit.

A separate key is responsible for making sails. Press it if you want to sail faster or loose enemy vessels. You cannot attack other ships until you drop the sails. Remember that the ship always moves in the same way, regardless of weather conditions. Don't worry when you sail into a storm - you won't have to change your direction or perform any additional actions.

Look for loot - sail towards a chest and press the interaction button to pick it up (usually, you will find Olive Wood). You can also sail towards question marks that are on the sea - most of them inform you about an underwater treasure (i.e. shipwrecks on the bottom of the sea).

Adrestia can be docked in harbors. They are neutral which means that no one will attack you in those locations. You should also know that Adrestia is a "mobile" fast travel point. Select the ship on the world map to reach it in no time. 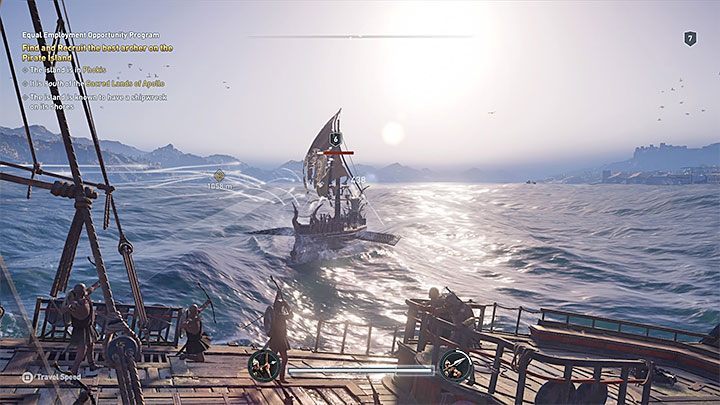 Before you approach another ship, you can make a quick reconnaissance with Ikaros. After tracking a ship, you will receive information about its flag. This is useful when, for example, you have received a quest to sink ships of a certain nation or if you want to avoid problems resulting from falling into pirates.

A battle can be started by your crew or you can get attacked by pirates. Always check crew level of a hostile ship. Running away is recommended when a ship has higher level than yours.

The basics of naval combat can be learned during Learning the Ropes main quest. Initially, you can attack other ships with bows and spears. Try to be precise with aiming so you can hit your target with as many arrows/spears as possible. Later, you will unlock Fire Braziers - this item allows you to use fire arrows/spears.

You don't have to limit yourself to the aforementioned weapons. You can also try to ram into an enemy ship (remember to order your crew to row faster so your ship can gain speed). 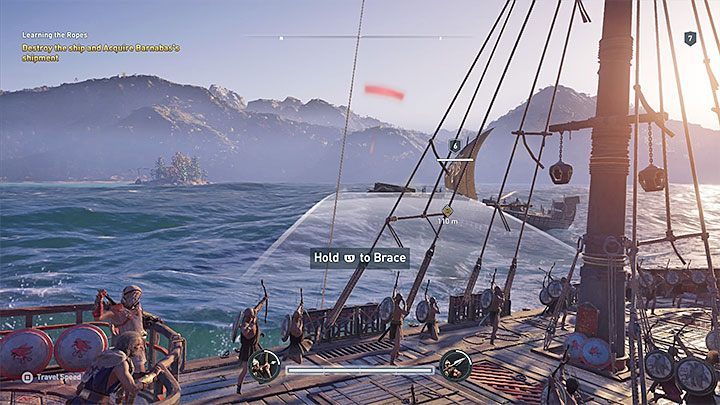 Of course, the sea battles are not one-sided. You must reckon with the fact that enemy ships can also attack Adrestia. First of all, react to signals that the enemy ship is preparing to fire. Hold down the appropriate button (Brace) to minimize its effects. The same applies if you see an enemy unit striving to take care of Adrestia.

It is often the case that several enemy ships are being fought at the same time. Attack them one by one, starting with those ships that are weakest and that are easiest to sink or immobilize. 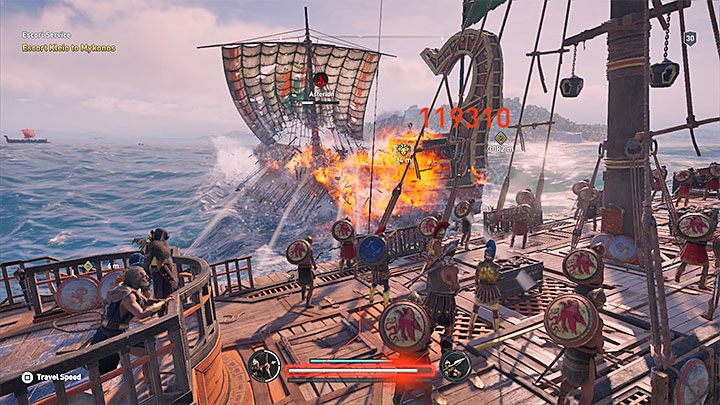 During the later stages of the game you can purchase a ship upgrade called Fire Braziers. It is very useful and you should not restrain yourself from unlocking it for too long. This upgrade allows you to attack enemy ships with flaming arrows and javelins.

You cannot use the fire braziers without any limits, though. After you unlock them, you will see a new bar on the bottom of the screen. You have to charge it the same way you charge your adrenaline bar on land - by performing standard attacks. After you fill up at least one segment of the yellow bar, you can press a key of a combination of buttons to release flaming arrows or javelins. A successful attack causes a fire on enemy ship causing it to lose energy points at a higher rate. 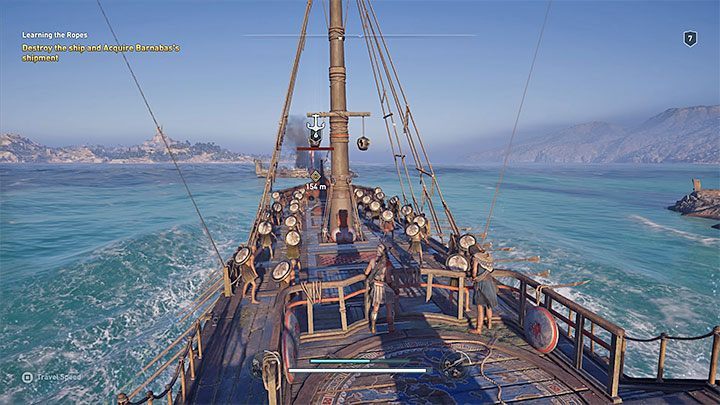 Each naval battle can end in three ways and two of them are recommended actions.

The first recommended way to end a battle is to halve an enemy unit. You have to deprive it of its energy in advance, so that it is on the verge of destruction. Then direct your own ship in such a way as to hit the side of the enemy ship. Just before hitting, hold down the Ramming Speed button to increase the impact force. 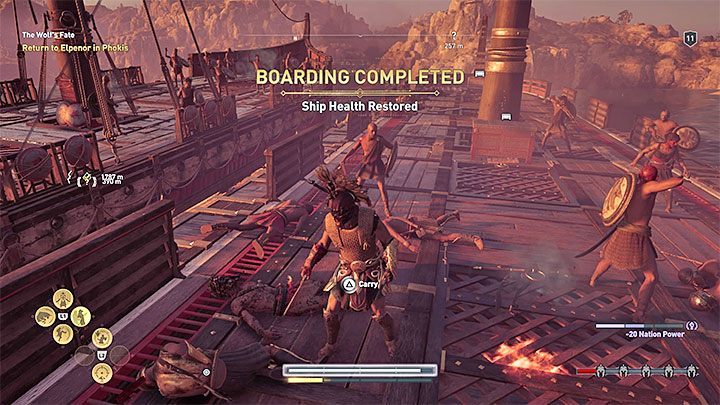 The second recommended way to end the battle is to carry out a boarding. In order to do so, you have to swim to a weakened unit and hold down the boarding button. Climb on board of the enemy ship and kill more sailors. Use the Spartan kick to push enemies into the water. After winning a battle, search the ship's chest.

Both methods described above will allow you to gain more loot and renew part of Adrestia's energy bar. 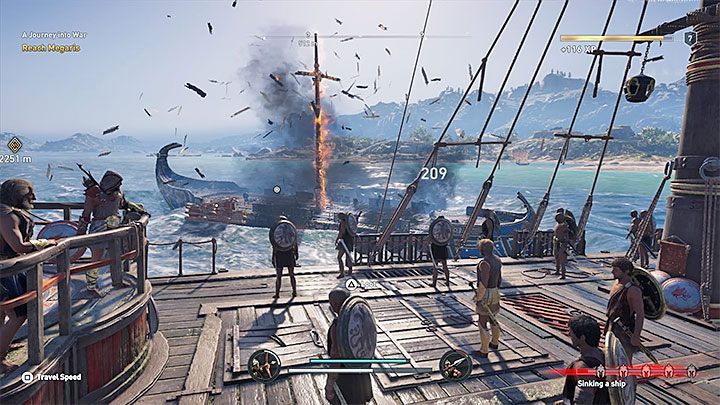 The last way concerns the further shooting of an enemy ship using arrows or javelins. This will lead to the sinking of the ship. Less treasure will remain on the surface and Adrestia's energy bar will not be renewed. 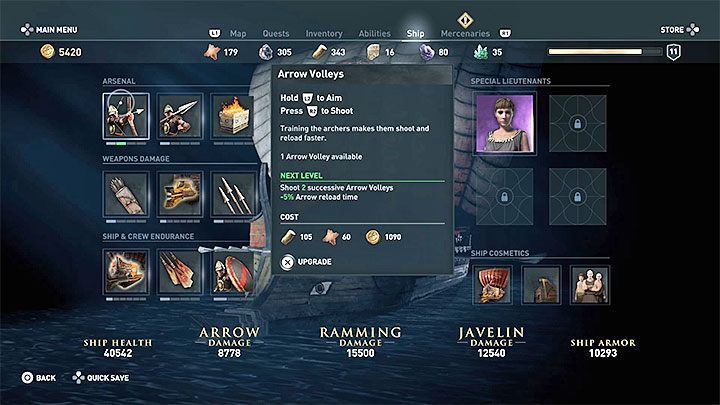 Adrestia can be upgraded in any moment after selecting the Ship tab in the menu. Upgrades were divided into three main groups:

All the improvements are useful, but the three most important ones in our opinion are:

Upgrading a ship shouldn't be done at the beginning of the game, because it is very expensive (huge amounts of gold and raw materials are required). In addition, sea battles are not required to complete the initial chapters of the game (except for the tutorial). Get interested in this topic a little later.

How can you recruit new crew members (lieutenants)? 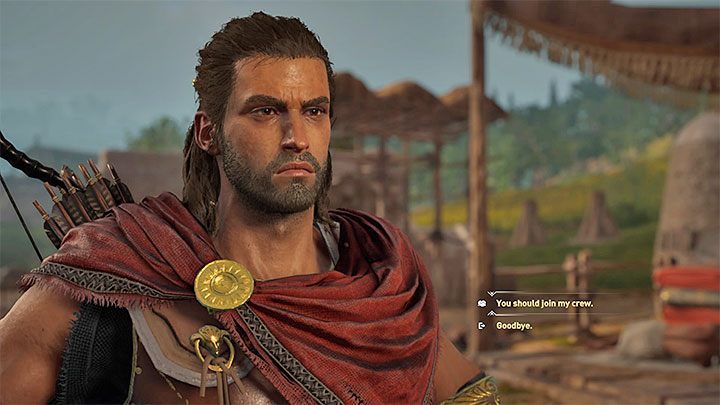 Lieutenants are crew members who can be placed in active slots on board of a ship. At the beginning of the game you have one slot, but ultimately there can be four of them. Further slots are unlocked by upgrading the hull.

You can place one lieutenant in each slot. These are recruited NPCs who decide to travel with the hero. The first such character will be recruited as part of the main plot. You have to search for the next candidates yourself. Each casual character is described by statistics, which may have impact on the ship. For example, certain ship's attacks can be strengthened or its stamina can be improved.

There are two main ways to obtain NPCs. Some NPCs may join the ship's crew after completing the related quests. It is enough to invite them in such a situation. 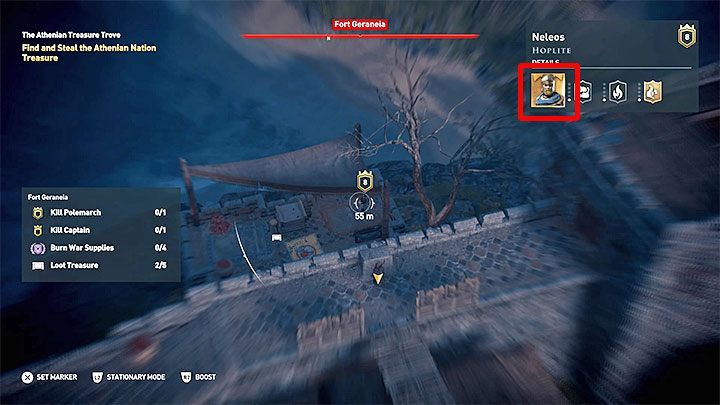 The second method of recruitment is more complex but also more profitable. You can stun your opponent and after he loses consciousness, approach him and offer him a job.

Theoretically, you can recruit any NPC, but it's worth relying on the help of the Icaros the eagle and "scan" them. Each opponent is marked with a color indicating the level of his skill. Look for violet and gold (example shown in the picture) NPCs. A golden NPC can be e.g. a fort commander or a mercenary hunting for your hero. 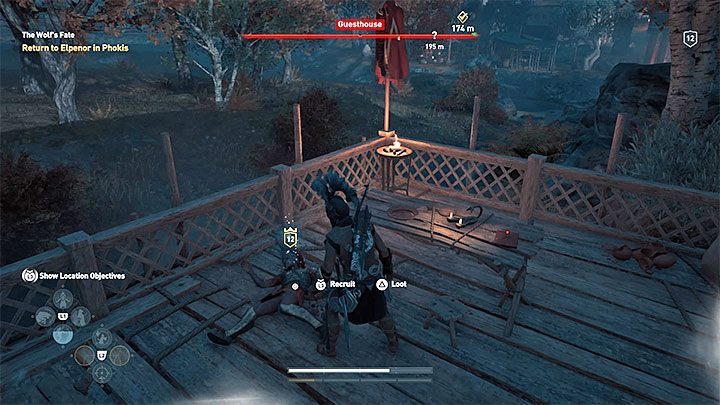 Stronger enemies are strong enough to withstand a standard stun from behind - it won't be enough to deprive them of consciousness. Start by acquiring the Spartan kick ability - this is one of level 1 skills.

Attack the target enemy in a standard way (bow, white weapon, etc.) and weaken him enough to leave very few health points left. Use the Spartan kick to stun your opponent and cut him to the ground. You can already approach the defeated NPC and press the recruitment button. 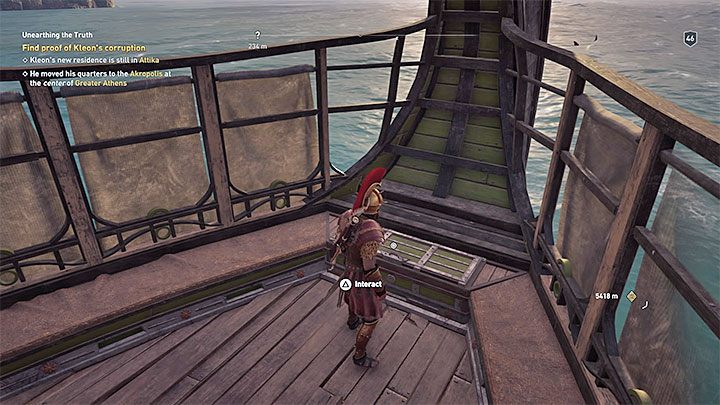 The 1.0.3 update for Assassin's Creed Odyssey has added the option to store your items in the chest located on the Adrestia (see the picture above). Here, you can place, i.e. legendary items you can't get rid of in any other way (by selling or dismantling), or items that require a higher level than the one you currently have. The chest can store up to 350 items.