Assassin's Creed: Odyssey features several dozens of unlockable abilities. This chapter focuses on important information regarding these skills. We also share tips on which abilities are the best and which abilities you should get within the first few hours.

General tips and information about the abilities 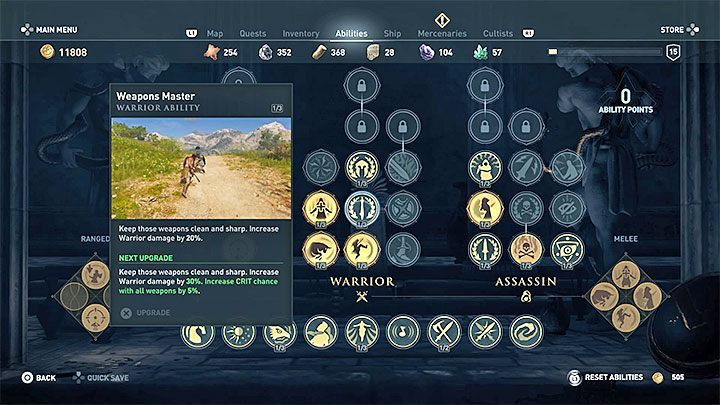 Which abilities should to buy first?

Predator Shot (Hunter tree) - An excellent ability when you want to eliminate enemies with a bow. You can shoot an arrow that deals 380% of your Hunter damage. On top of that, this arrow can fly farther and it can be controlled mid-air. Thanks to this ability you can one-shot enemies that wouldn't die from a regular shot.

Bull Rush (Warrior tree) - This is probably the most useful melee ability. Your character can perform a charge that deals 250% of your Warrior damage, and it knocks an enemy down. This ability allows you to weaken enemies, including those equipped with a shield.

Sparta Kick (Warrior tree) - Another great active ability from the Warrior tree. Kick an enemy backwards and deal 160% of your Warrior damage. This ability is ideal when you want to push enemies from a rooftop or high stone ledges. A kicked enemy flies backwards and can either die on the spot or be severely injured due to fall damage.

Shadow Assassin (Assassin tree) - A useful passive ability that increases assassination and knock out damage (20% more damage by default). Also, this ability allows you to automatically loot enemies. Thanks to this skill you can be better at assassinating targets or recruiting new crew members (after knocking them out).

Venomous Attacks (Assassin tree) - Poison enemies with melee and ranged weapons. A poisoned enemy stays in this state for 15 seconds (the default amount of time). Poison depletes health points but it also weakens an enemy's attacks and armor. A great skill when you have to defeat enemies with longer health bars - you can speed up the process of eliminating them and reduce their threat. The ability requires a free slot but it doesn't deplete adrenaline.

Revelation (Assassin tree) - An unusual skill because it isn't related to combat nor stealth. Instead, it allows you to "scan" the area (the default radius of 15 meters - hold the button that allows you to call Ikaros). Unlock this ability if you want to find resources, treasures, enemies and other interactive objects faster.

Devastating Shot (Hunter tree) - Another great active skill for a bow. You can shoot arrows that deal 290% Hunter damage (the default number; the damage can be doubled if you bend your bow all the way). Fire and poison arrows also deal more damage (150% by default). This ability is great if you are planning on using special arrows more often. They will be even more efficient at killing or weakening enemies.

Second Wind (Warrior tree) - This active ability is your priority when it comes to healing your character - each use restores 25% of your health. Second Wind is useful during almost every more challenging fight. Remember that this ability has a cooldown. You can't use it a few times in a row, even when you have plenty of adrenaline.

Weapons Master (Warrior tree) - This passive ability increases Warrior damage by 20%. Thanks to it you can increase your strength but the bonus counts only for weapons and abilities that deal Warrior damage. A weapon's type of damage can be checked in the stats window.

Rush Assassination (Assassin tree) - One of the most powerful active abilities in the game. You throw the Leonidas Spear at an enemy located farther away and deal them 100% Assassin damage (the throw itself looks more like a teleportation). What is more, you can direct your character at another enemy, provided that the previous throw was successful, and press the right button to kill that enemy (upgrade this skill to be able to chain more spear throws). A great ability for attacking enemies who travel in pairs - you can throw the spear at one of them and then attack their companion. A successful use of this skill won't raise the alarm.

Archery Master (Hunter tree) - Unlock this passive skill to increase Hunter damage (20% is the default value). Also, Hunter abilities won't use regular arrows. Get this ability if you are planning on using a bow on a regular basis.

Gear Master (Warrior tree) - Another passive ability. This one increases armor ratings for all equipped pieces of gear (30% is the default value). A very useful skill because better armor reduces received damage which, in turn, increases your chance at surviving on a battlefield.

Critical Assassination (Assassin tree) - A great ability if you want to rely on stealth kills. Use adrenaline to perform a strengthened assassination (by default, this skill deals 200% more Assassin damage). This ability allows you to one-shot enemies who would survive a regular stealth attack. Remember - besides adrenaline, you also have to wait until your character is ready to perform this attack. Use it on enemies who stand still.