On this page of our guide we have provided answers to all basic questions about the AC Odyssey in-game world, which may be of interest especially to new players. Other topics and issues associated with the Assassin's Creed Odyssey have been thoroughly discussed and explained on separate pages of this chapter.

Can you use a shield? 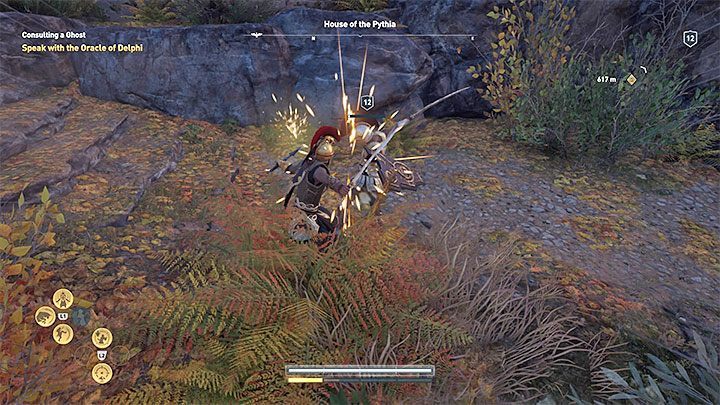 No, there are no shields in Assassin's Creed: Odyssey. The game features multiple enemies with shields but your character can't use these items. Instead, the developers have introduced a parrying mechanic. You can use this move by pressing L1+R1 (PS4) or LB+RB (XONE). Use parry when your enemy has started their attack. A successful parry interrupts an enemy's attack and makes them vulnerable to yours. Also, the game informs you about the correct use of this move by showing sparks (see the picture above). Always use a chance to attack vulnerable enemies.

Note - Parrying doesn't work on unblockable attacks which are signaled by a red aura around an enemy. Here, the only solution is to dodge.

How to change the time of the day? 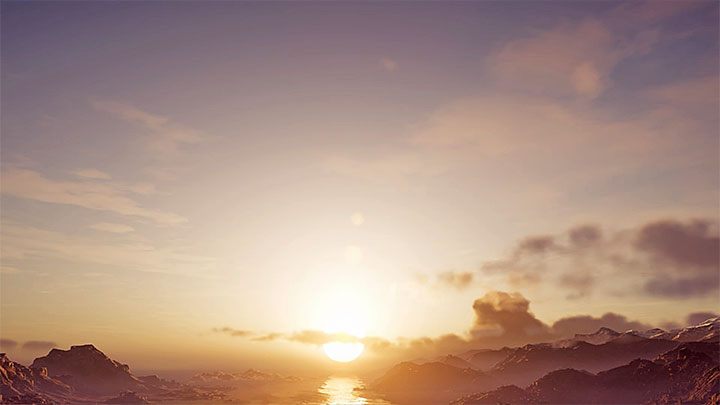 It is very simple - hold the button that allows you to speed up time (the touchpad on PS4 and the Options button on Xbox One).

You don't have to buy any abilities to speed up time. You can also switch between night and day (you can do that as many times as you want). However, this option can only be used when you aren't fighting with anyone and when you are outside of a restricted zone (indicated by the red color on the top of the screen).

How to leave the ship's helm? 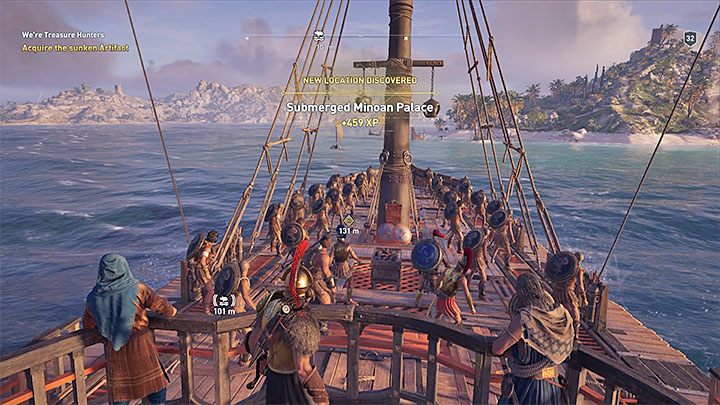 During your time on seas you can decide that you want to leave your ship's deck even before you reach a port or other interactive location. There is a way to do that - press Triangle on the PS4 gamepad and Y on the Xbox One. This option is useful when, i.e. you can't find a port on an island or you have just discovered an underwater location and you want to explore it.

How to reset the skills?

Assassin's Creed: Odyssey allows resetting the skills at any point of the game. You don't have to visit any NPC to do that. Just open the skills tab and then press and hold the left analog stick (L3). You will hence reclaim all skill points and will be able to spend them again.

Only reset the skills if you're playing on a higher difficulty, where having exactly the right skills is crucial. On low and normal difficulties, it's better just to wait until getting to the next level to buy a new skill. You can always save the game before buying new skills. If you don't like what you get - reload the game and reconsider.

Can you pet a dog?

No, Assassin's Creed Odyssey unfortunately doesn't offer the option of petting dogs or other domesticated animals. AC Odyssey offers the opportunity to purchase a beast master skill, which allows you to tame wild animals and rely on their support during combat. The technique of taming wildlife is described on the page Can animals be tamed? in the FAQ chapter of our guide.

How to mount a horse?

It is very simple to do. Approach a horse and press the interaction button - Triangle on PS4 and Y on XONE. You can even mount horses that don't belong to your character.

You can also get on your horse automatically after you call it. Press and hold the button to call your horse (down on the d-pad). Hold this button until your character mounts their horse.

How to dismount a horse?

There are two possible ways to dismount a horse:

Can my horse die permanently?

How to perform the Sparta Kick? 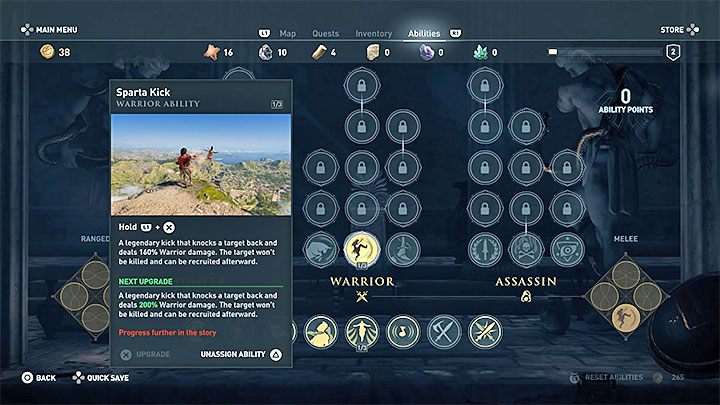 The Sparta Kick is probably the most recognizable move in the game. It's the famous kick of Leonidas from the movie 300. Good news is that the Sparta Kick can be unlocked right at the second level of experience. This is one of the starting skills for the Warrior category. 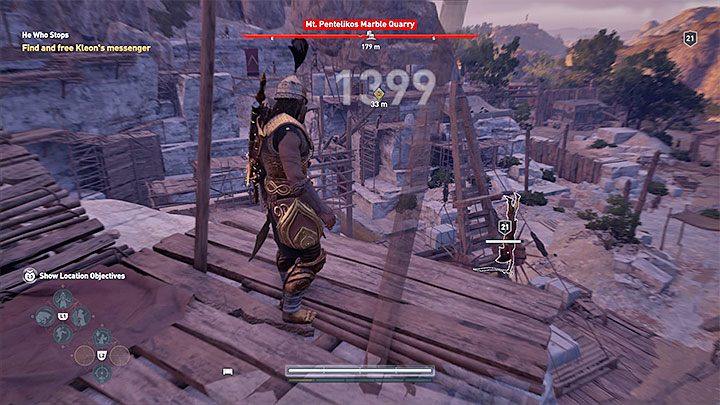 The Sparta Kick has to be assigned to one of four buttons on the pad. This can be X, which gives you the combination L1+X on PS4 and LB+X on Xbox. In order to perform the Sparta Kick, you need at least adrenaline bar filled. Adrenaline is generated simply by hitting enemies.

The Sparta Kick is most useful to throwing enemies off rooftops and high ledges. Activate it, when an enemy is standing near an edge. Falling from a considerable height can kill even a powerful enemy. This makes it the perfect skill for killing difficult enemies. You can also exploit this ability. Just provoke the enemy by hitting them with an arrow, or simply revealing yourself to them. Then, lure them to a high spot and try to kick them into the abyss.

Important note - Sparta Kick won't throw an enemy off of a rooftop or a ledge if their level is higher than yours (the difference of 2-3 levels or higher). The ability will only push that enemy backward. The enemy will stay with you on the same rooftop/ledge.

Is there a hidden blade in? 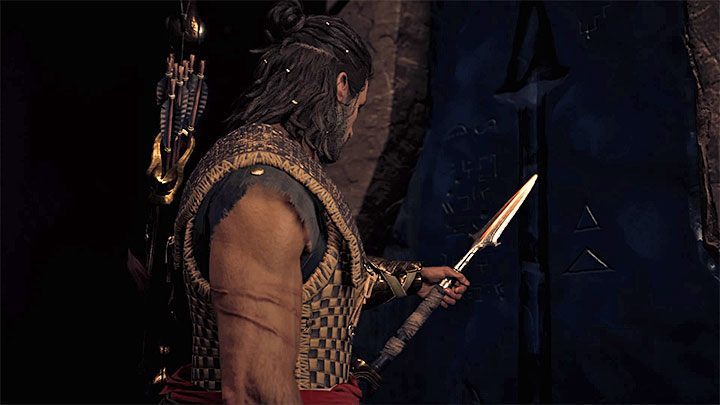 No, Assassin's Creed: Odyssey doesn't feature a hidden blade. The first hidden blade was used in the assassination of Xerxes I. This means that this blade wasn't used during the time of Alexios' and Kassandra's journey. Instead, the heroes are equipped with the Spear of Leonidas which is used for, i.e. assassinations. The story of the first Hidden Blade will be featured in the upcoming DLC for Odyssey called "Legacy of the First Blade" (set to be released on December 2018).

Yes, Odyssey does feature an online shop and microtransactions. Real money and Helix currency can be spent on, i.e. boosters (such as getting XP or resources faster), maps, new outfits, mounts, weapons and sets.

No, Odyssey doesn't feature a full-fledged multiplayer mode. The only multiplayer function is a set of screenshots on the world map. These screenshots are related to community mechanics. Move the cursor over a special icon to see a picture and the name of the player who took that picture. You can click on the like icon and... that's it. The game gives you the option to change filters for the pictures - you can browse through, i.e. the most popular photos of the week or pictures made by your friends.

Yes, the new game takes place before the events in AC: Origins, 400 years before Bayek's adventure. Odyssey is set during Peloponnesian Wars. Players can align themselves with one of the sides of this conflict - Athens and the Delian League or Sparta and Peloponnesian League. The precise date is 431 B.C.

Yes, Assassin's Creed: Odyssey is available on Steam, although the game also requires Uplay client and a Ubisoft account.

Yes, Odyssey will be available on Switch. However, this won't be a normal release. Odyssey on Nintendo Switch is available through streaming. The game will require a fast and stable Internet connection. Odyssey will run on Ubisoft servers. You will only receive the picture. Because of that it is probable that Assassin's Creed: Odyssey won't be as responsive. The first game that was released like this on Nintendo Switch was Resident Evil VII: Biohazard - this service wasn't available outside Japan.

How long does it take to beat Assassin's Creed Odyssey? 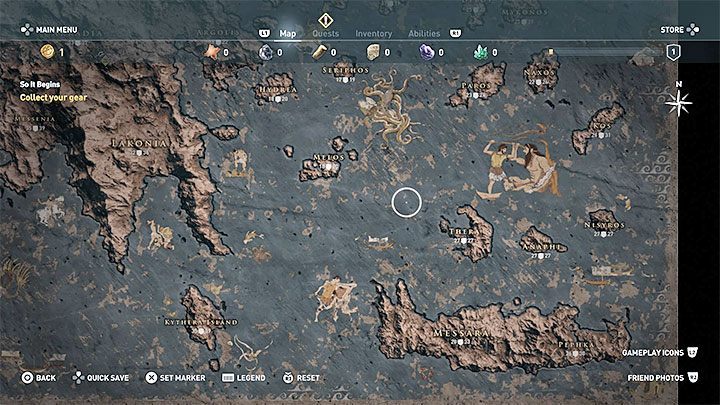 It depends. The main storyline takes 30 or more hours. However, Odyssey has a lot of high-level areas which means that you will have to develop your character by grinding. The game offers microtransactions that speed up various processes (faster XP, resources and gold gain, maps). Without them, the game seems almost too grindy.

What size is the game world? 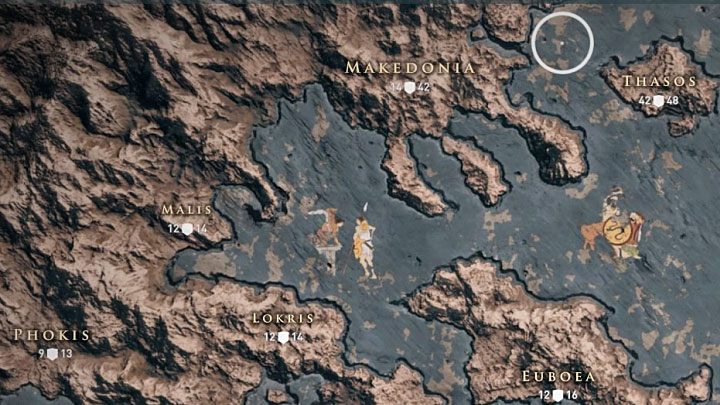 The world in AC Odyssey is gigantic. The size of the map in the game is 16x16 km, what equals a surface of 256 square kilometers. However, it is worth mentioning two important things:

Is Assassin's Creed Odyssey an RPG?

AC: Odyssey is an action RPG open world game. Odyssey continues the changes made in Origins but it also adds, i.e. a simple system of dialogs and choices. Our character has multiple stats (level, health points, defense). Items have their own stats and abilities. Odyssey sometimes resembles Skyrim but you should keep in mind that this game is still an action game set in an open world.

Are there any DLCs for AC Odyssey?

Yes, bigger DLCs will be available after the game's release. The first DLC, called "Legacy of the First Blade", will be available on December 2018. The second, "The Fate of Atlantis", will be released in 2019. The DLCs can be purchased separately or in the season pass. Besides that, players can also purchase smaller DLCs like new outfits, mounts etc.

Are there any templars?

No, there are no Templars. However, Odyssey features their precursors called Cult of Kosmos. They have similar views and methods of dealing with problems as the Templars found in previous installments. Their elimination is important in the later part of the campaign.

Which version of AC Odyssey should I get? 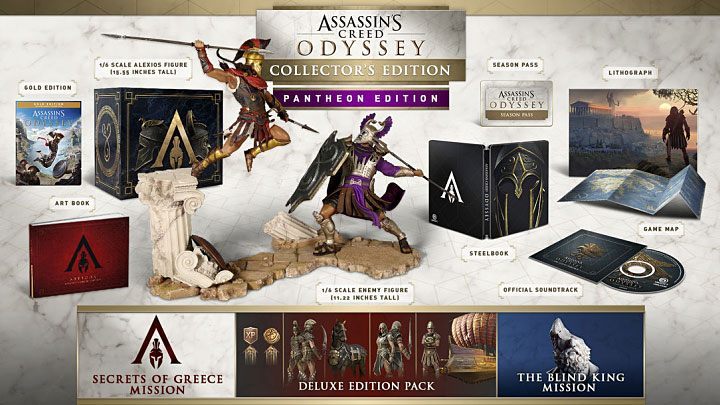 There are 7 different versions of Assassin's Creed Odyssey, some of them are available only in Europe or on Uplay: