On this page of Assassin's Creed Odyssey guide we have uploaded a map describing the Elis region. In this location you will complete some of the main story quests. All possible side activities are marked on the map. These include viewpoints, tombs, animal lairs, ancient tablets and Ainigmata Ostraka. 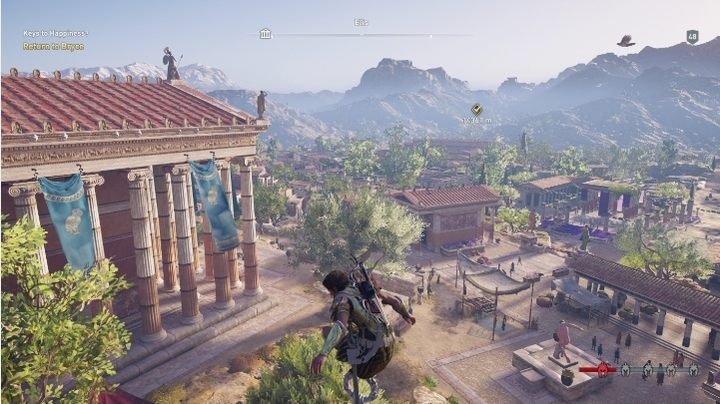 1. You will find Elis in chapter 7 of the main storyline. Try to complete side quests related to the Olympic Games right away. They may disappear from the map and it will not be possible to do them later.

2. The recommended level of hero experience for this region is 40. However, if you don't have this level of experience, it doesn't mean that you can't get here. Most of the western part of the map is devoid of aggressive enemies.

3. Within this region you will find the city of Elis, where you can find the leader's house, a viewpoint, temples, an information board and a blacksmith.

There are two tombs available to explore in Elis - Tomb of the First Champion and Destroyed House of Oinomaos.

There are two Ainigmata Ostraka in Elis:

1. Prophecy Prevention - can be found in Spring of Piera.

2. Centaur Field - can be found in Temple of Hades.

More about Ainigmata Ostraka in Elis on separate page of this guide.

There are two Ancient Tablets in Elis. They are located in the Spring of Piera and in the Dyspontion Ruins.

There is no one to romance with in Elis.