In Assassin's Creed Odyssey you'll find several historical figures. Some of them appear in the main quests, others only in side quests. You can even get into an affair with some of them. On this page we've compiled a list of historical characters appearing in Assassin's Creed Odyssey, who they really were and what role they play in this production. 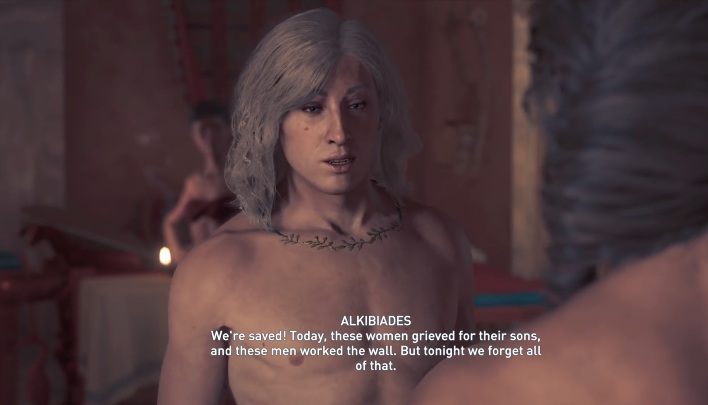 In Assassin's Creed Odyssey appears the character of Alkibiades, an Athenian strategist. Your meeting with him takes place during the main storyline. In the fourth chapter of the game you will come to the Attika region. There you will start a quest called Perikles's Symposium. During the mission you will find yourself in the house of Perikles and Alkibiades. There you will be given a side mission - Oil and Love. This mission will take you to a room where Alkibiades plays around with other Athenians. During the first conversation you will be able to act like a real mercenary would or flirt with the character.

Alkibiades was an Athenian strategist who, despite being a good politician and leader, had a very bad opinion. He was considered to be an imprudent, amorous person with exorbitant ambitions. These qualities led to him having made many enemies. During his life, he even changed the side for which he fought, but nevertheless obtained forgiveness from Athenians and returned to them as a brave commander.

Alkibiades' role in the game

Alkibiades appears in Assassin's Creed Odyssey both in main and side missions. He will entrust you with several tasks - Handle with Care, Designated Rider, Rock Hard, Across the Border and Happily Ever After? In the case of the main missions, he reappears in the eighth chapter of the game, accompanying you on your way to the Olympics. 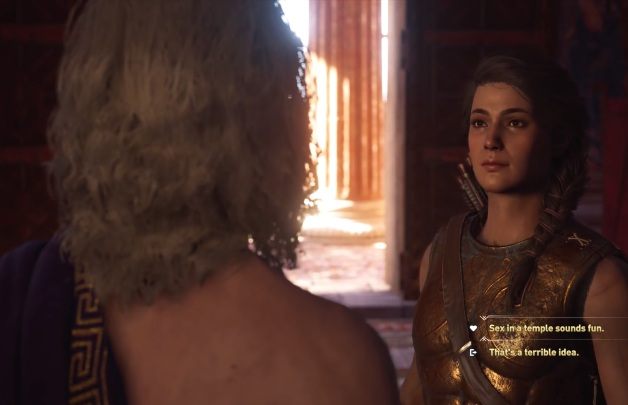 You can get into a long-lasting romance with Alkibiades. Your character can sleep with him after completing basically every single quest for him. A detailed description of the romance with this character can be found on a separate page of the guide. 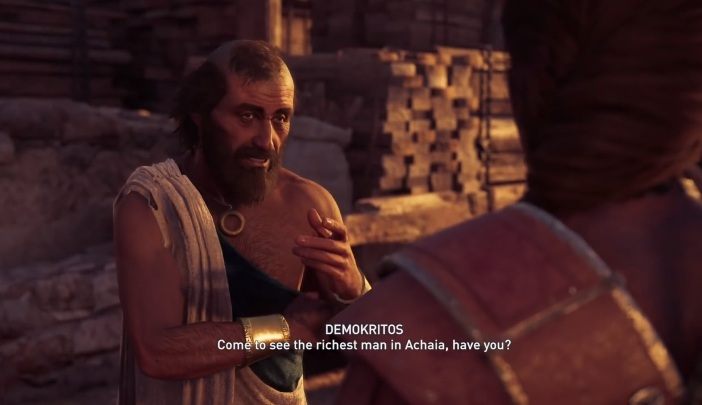 In Assassin's Creed Odyssey, you'll get to know the character of Demokritos. To meet him, you must approach him and talk to him. This involves starting a side mission. Demokritos waits for you in the region called Achaia after completing the main mission A Debt to Pay.

Demokritos' role in the game

Demokritos will only give you two side missions - The Dunce Conundrum and Another Kind of Poetry. These are the only missions you will receive from this character. 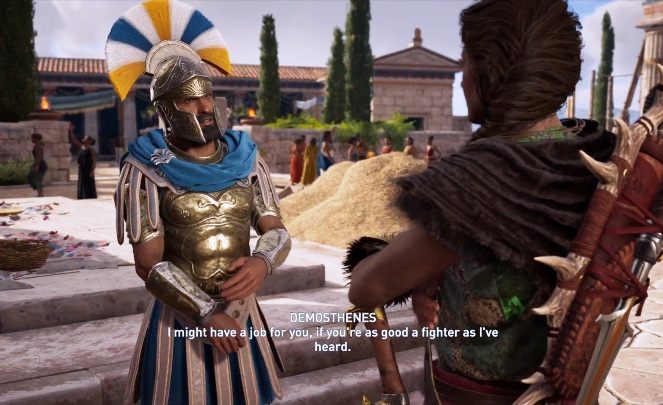 In Assassin's Creed Odyssey, you'll also meet Demosthenes. The character of Demosthenes will be unlocked when you reach Attika. From this character you will get many side missions, but they will consist of exactly the same activity - collecting Spartan seals.

Demosthenes was an Athenian politician criticizing Macedonian domination of the world. His speeches brought him fame, and some of them are still known today.

Demosthenes' role in the game

From Demosthenes you will get many side missions requiring you to bring him Spartan seals. These missions are good for character development because they give you many experience points.

You will also be able to talk to Demosthenes about his achievements and that he feels underestimated. 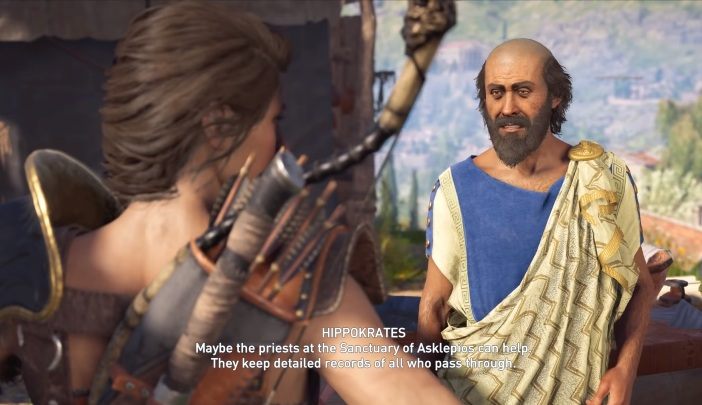 Hippocrates was the father of medicine, the precursor of modern medicine. Hippocrates is considered to be the author of books on such fields as anatomy, pathology, surgery, obstetrics, etc.

Hippokrates' role in the game

Hippocrates will give you four side missions - The Hunting Party, Let My Patients Go, Inheritance Insurance and Too Much of a Good Thing. He does not appear in main missions or other activities. 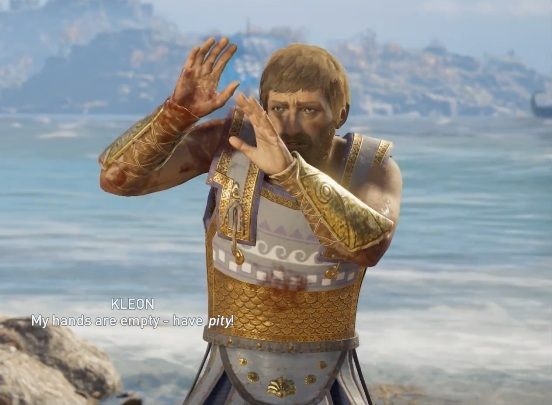 In Assassin's Creed Oddysey you will encounter Kleon in Attika. He will be leading a political debate, which you'll interrupt. If you talk to him, he will give you a side mission.

An Athenian leader and politician. One of Pericles' most ardent adversaries. He gained much from his death, as it made him the most influential political figure of Athens. He opted for the war against Sparta and holding a hard line in international policies.

Kleon's role in the game

From this character you will get a few side missions. Each of them will be based on weakening Sparta's position - burning supplies, killing leaders, etc. Kleon will reward you with experience points and new equipment for performing tasks for him.

Eventually, you'll have to fight him, because he will turn out to be the Kosmos Cultist. 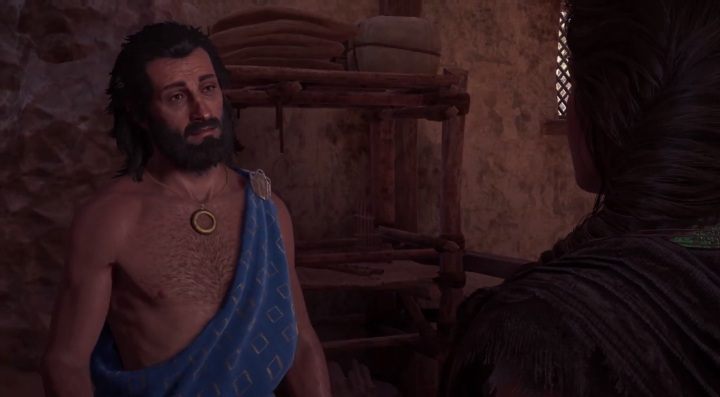 Having completed the mission from Pericles, Assassin's Creed Odyssey will send you to Phidias. He will be convinced, that someone is trying to kill him. By agreeing to solve this mystery, you will receive a side mission.

A Greek sculptor and a friend and advisor to Pericles, which is accounted for in the game. His works had a great impact on the development of art.

Phidias' role in the game

You can complete up to seven side missions for this character. While performing these missions you will try to solve a puzzle, unfortunately at the very end of the side missions Phidias will be killed and you will have to avenge him. 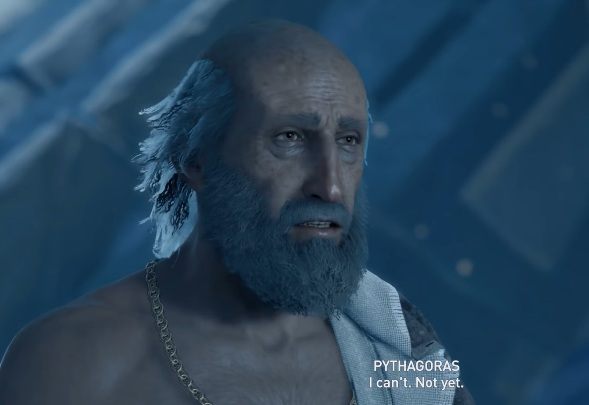 You can encounter Pythagoras in Assassin's Creed Odyssey. You'll find him during the mission A Family's Legacy. He waits for you in Atlantis. To continue doing missions for him, you must kill all the mythical beasts. Each of them has been described in our guide.

A Greek philosopher, mathematician, and mystic. Many will associate his name with the Pythagorean theorem. He created schools, in which he taught a unique way of life based on his philosophy.

Pythagoras' role in the game

Pythagoras will wait for you in the Atlantis. He will tell you about quite a few secrets and mythical beasts, demanding secrecy in return. When it comes to Pythagoras, you may either challenge him to a battle, or leave the place unscathed. 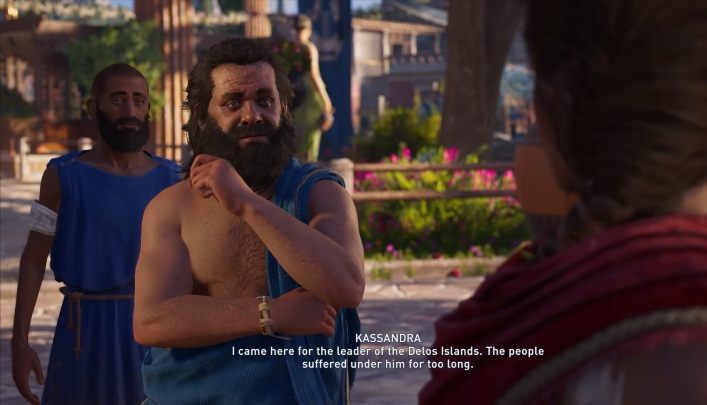 Sokrates will appear in Assassin's Creed Odyssey when talking to some citizens near the Temple of Apollo. He will criticize your life choices and your way of life in general, but ask to free his disciple.

Sokrates was a Greek philosopher. He taught others, for example Plato; in fact, most things we know about his philosophy came to us from his disciples.

Sokrates' role in the game

Sokrates is a philosopher who eagerly talks to our protagonist. He criticizes them for choosing their way of life, however, he also gives them a few tasks. They are based mainly on freeing people. If you hurt innocent people while performing tasks for him, he won't say a bad word about you.