As you go through Assassin's Creed Odyssey, the hero can participate in many different quests. On this page you can find out if you can fail a quest and how to deal with any problems that may have occurred while completing a specific task.

In which circumstances you may fail a quest? 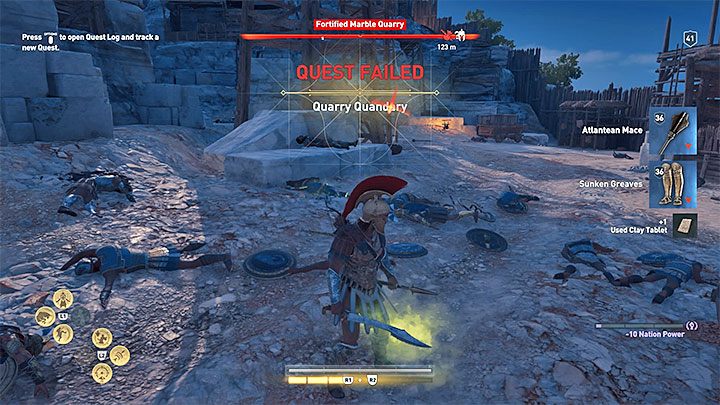 Yes, in Assassin's Creed Odyssey you can fail some quests. Thankfully, this includes a small percentage of missions added to the log as you go through the game's story. You don't have to be afraid that the failed quests will deprive you of opportunity to play important parts of the main story.

The possibility of failing a quest concerns most of the "protect NPC" quests. The most important NPCs from the point of view of game's plot are "immortal", but this unfortunately does not apply to less important characters that are freed by your heroes from being captive in enemy locations. This issue also concerns escorted characters to the places related with specific quests. These characters may die if they are attacked by enemies and if you don't get them any help in the right time.

Another reason why a quest may fail is the death of a potential quest giver as a result of your decisions concerning the storyline. The game will not allow you to play these quests by meeting an "alternative" quest giver.

The game may also cancel quests. This is especially common for Support Quests, and this may happen if you have taken on a difficult task prematurely, such as murdering a leader before you have weakened the region sufficiently enough. Support quests can disappear from the log for good or be transferred to the side quests category. The risk of cancelling a mission may also occur for time quests. If you don't deal with them within 24 hours from the moment they are unlocked, you will miss the chances of completing them.

How to protect yourself from failing a quest ?

Assassin's Creed Odyssey doesn't allow you to repeat quests even when a quest has been failed. So you have to protect yourself in other ways to prevent a quest from ending in failure. Here are the possibilities: