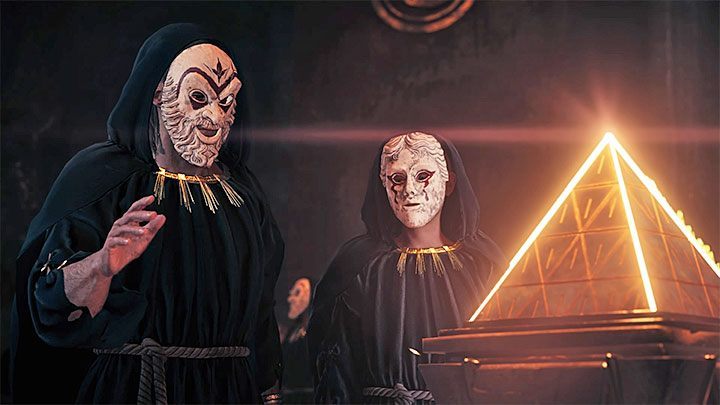 The Cultists are a secret organization in Assassins Creed: Odyssey. Its members are hostile towards the protagonist. You will eliminate some of them during the game. This section contains info that will enable you to find the hideouts of the Cultists, how to track them down and what rewards can you get for that.

Where is the Cultists' hideout? 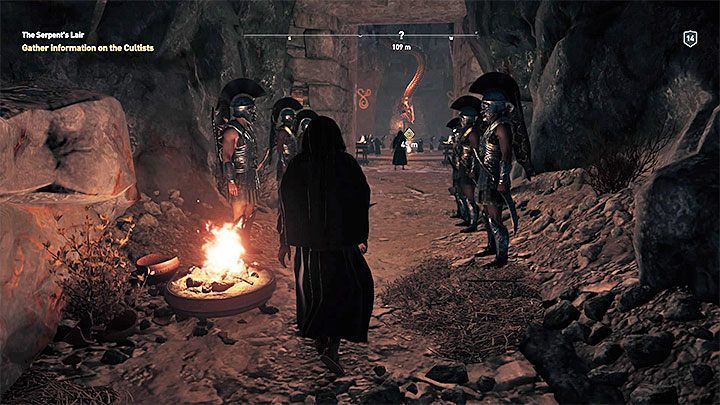 You cannot miss the encounter with the cultists in the game. The protagonist will have to infiltrate their hideout in chapter 3. After progressing to The Serpent's Lair main quest. This quest is pretty linear and during the stay in their hideout, the protagonist won't be attacked.

After the visit to the Cultists' hideout, a new section will be added to the pause menu - The Cultists. From thence on, you will be able to track them down and eliminate them.

Note - hunting for the Cultists happens independently of the progression in subsequent stages of the main thread. You can still engage in main quests without the need to grind for the cultists' encounters.

The Diagram of the Cultists 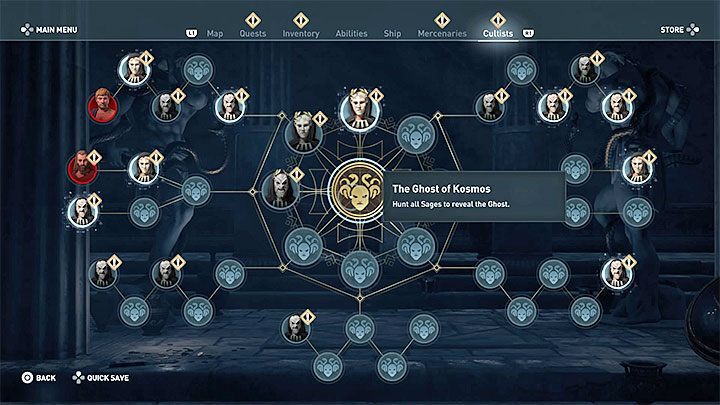 The diagram of the Cultists shows around two dozen members of the cult. There's a certain hierarchy at play here. Lower cultists answer to the higher ones (Sages). The only exception is Deimos. He doesn't have any subjects. The identity of this character is revealed during the very first visit to the hideout.

All the lines of the diagram lead to a single entity - The Ghost of Kosmos, who is the leader. In order to destroy the Cult, you will have to hunt for the lowest-ranking members. Killing them will gradually reveal to you the identities of the Sages. 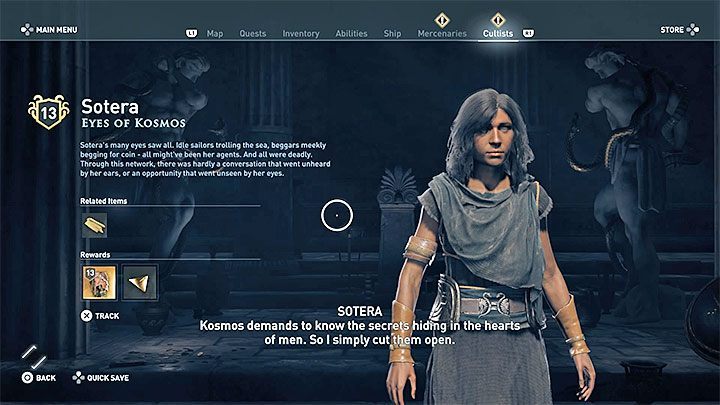 After clicking any cultist, the game will show you his bio. Some are known to the protagonist right away. You can start tracking the given person, as well as learn about the rewards for killing them. The awards are always a legendary golden item and a new Mysterious Fragment. These artifacts are mainly used for upgrading Leonidas' spear. 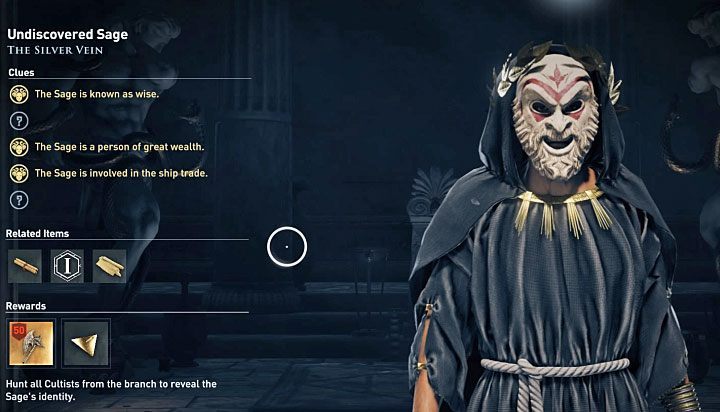 The identity of most cultists is a mystery at the beginning. In these cases, you will first need to collect the traces allowing you to identify the figure you're looking for. In the case of low-rank cultists, you only need one piece of evidence, but the more important members of the Cult (such as the one above) require five traces. 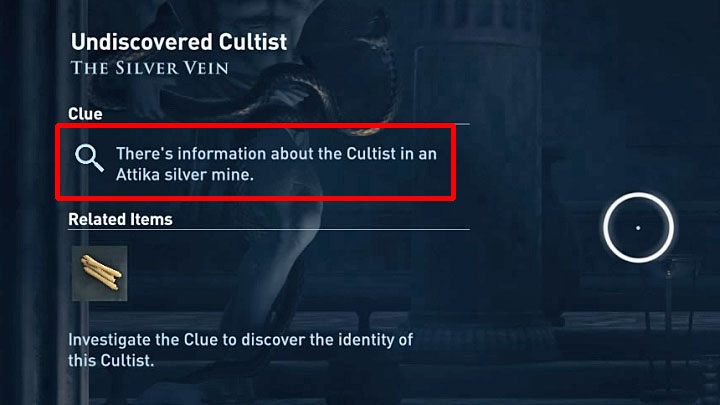 There are a few different ways in which you can get Clues that allow you to identify the Cultists. A Cultist's page informs you about requirements you have to meet in order to identify this person - the picture above shows an example where the main character has to visit an Attika silver mine.

The most common ways of getting clues:

More unusual methods of getting clues are, i.e. purchasing hints from merchants or participating in the Arena fights. 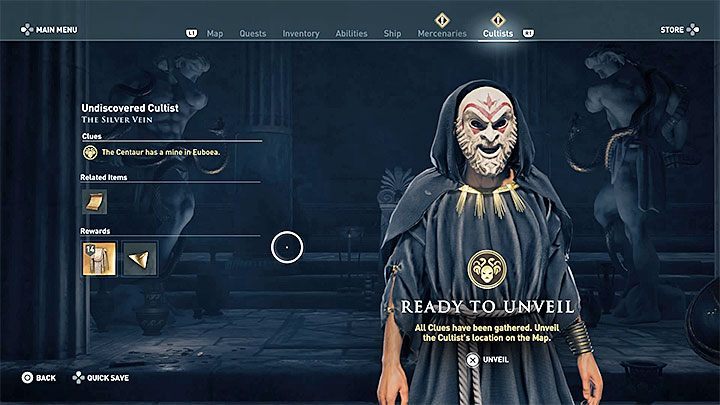 After collecting enough traces, you can open the given cultist's bio and learn the identity and location of a Cultist of the Kosmos.

Killing the cultists from the bottom row 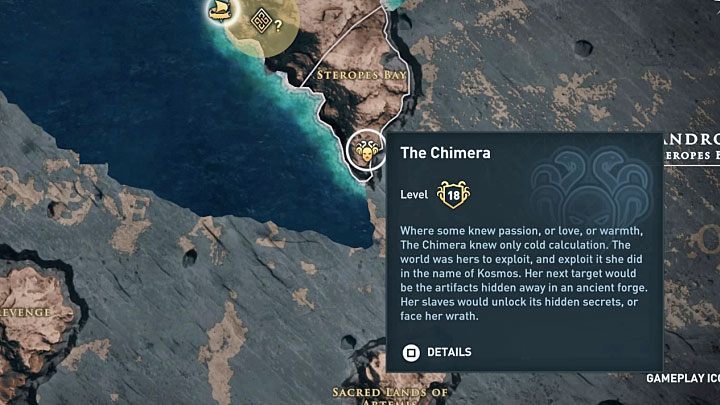 Each identified member of the Cult is marked on the world map - the example of an icon showing an identified Cultist is shown above. These icons also appear in the regions that haven't been discovered yet. Before setting out, make sure your level meets the requirements of the mission. 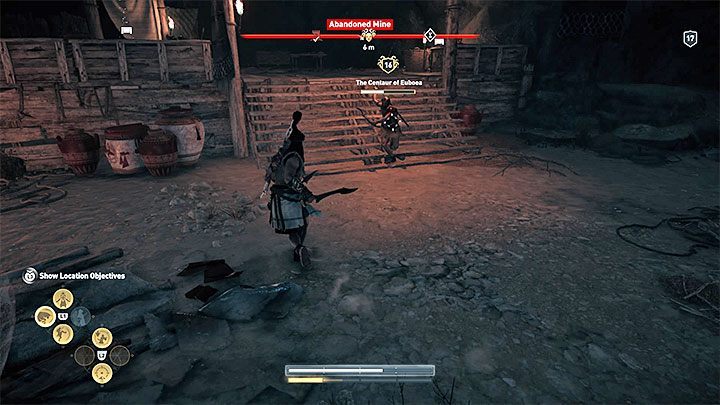 After reaching the hideout of the given member, you should do a quick recon with Ikaros; those characters are oftentimes well equipped and very good in combat Kill then in any way you can. After defeating each cultist, approach them and confirm the assassination.

More information on the particular cultists and the quests related to the Cult of Kosmos can be found in the section of the guide devoted to those issues.

Killing the Cultists from the top row (Sage) 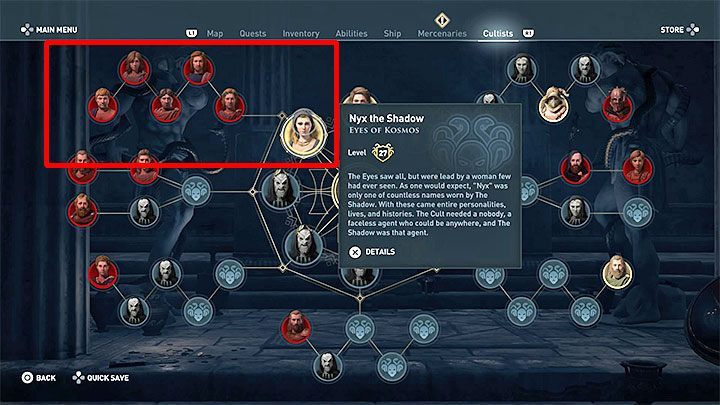 The Cult is represented by eight Sages. Deimos is, as we have already mentioned, a unique character. The remaining seven Sages must be located and killed.

Sages are harder to identify. A single clue is not enough. Instead, you need to collect clues from the bottom row Cultists that are in the same branch. The picture above shows an example where killing five Cultists from the top left branch has allowed us to learn Nyx's identity.

An identified Sage can be killed in the same way as other Cultists. You can start tracking this character, find their icon on the map and then kill that person however you want.

Killing Sages gives you additional rewards. You can receive valuable artifacts, a lot of gold and XP and even a full set of legendary items. What is more, every dead Sage leaves a clue that allows you to identify the Ghost of Kosmos. There are 8 Sages which means that you need to collect 8 clues to learn about the Ghost of Kosmos' identity and whereabouts.