On the following page of our Assassin's Creed Odyssey guide you will find a description of all side quests in the Eubea location. 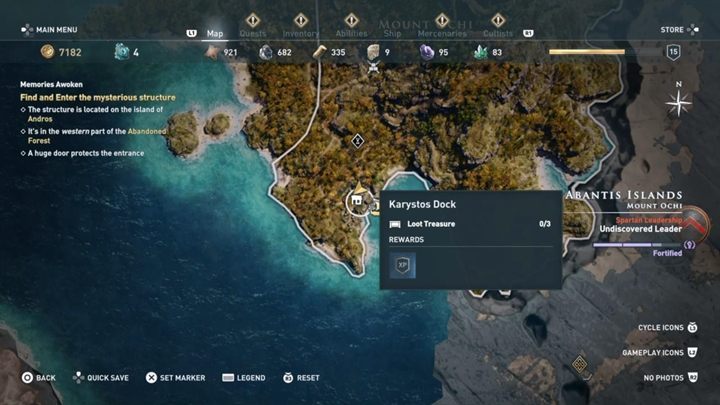 Description: On site you will find a slave-owner who has been robbed. He will ask you for help to find his vases. Speak to a slave you will find nearby. He will indicate the location of the item and ask you to indicate that he was involved in theft. 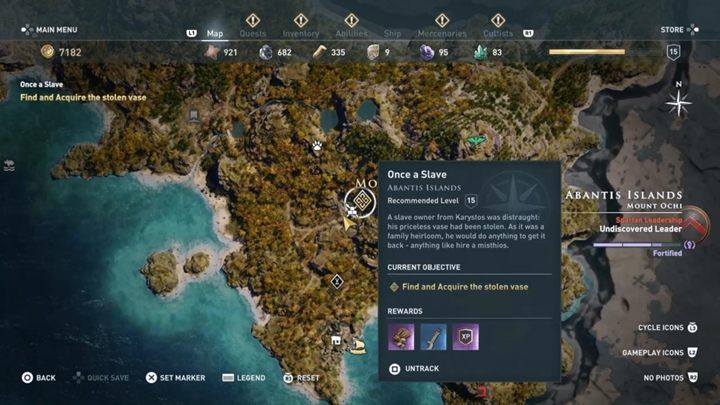 Go to the indicated place and enter the cave. Defeat the bandits and take the vase out of the chest. Return with it to the owner in the docks and decide if you want to contribute to the further captivity of the inhabitant. The quest will come to an end. Reward: +4500 XP. 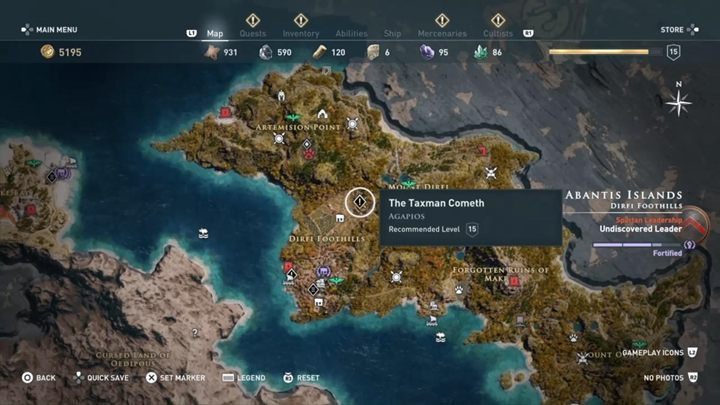 Description: Talk with a drunken woman on top of the building. You'll find out that her husband has disappeared. 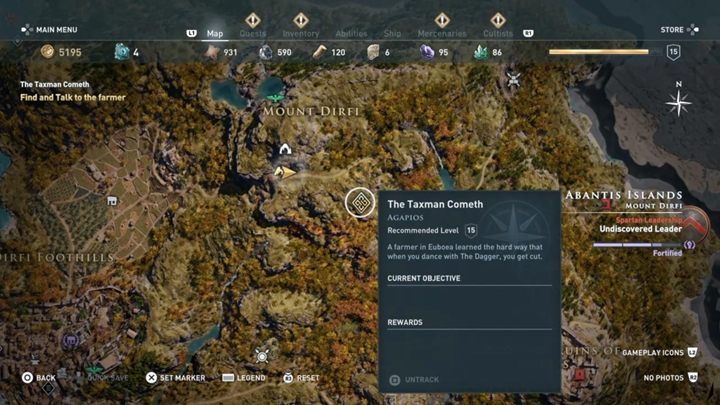 You have to go east, where you will find a destroyed cart. Speak with the surviving peasant and you'll find out that he's in search of the Dystos Stronghold. Reach the site - it's full of enemies. Break through to the man's cage and free him. You must escort him to a safe place. 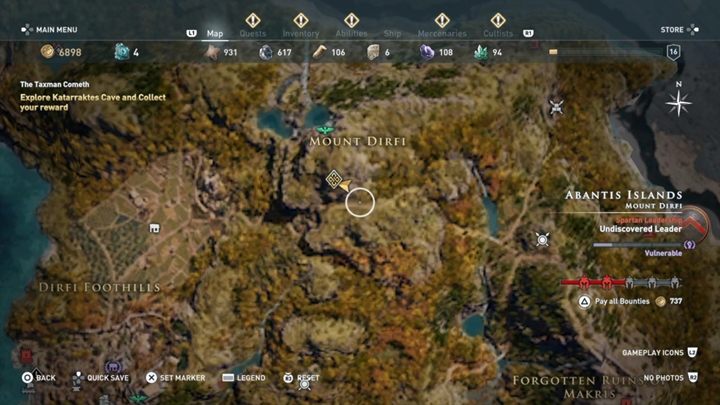 After some time, the man is thankful and he tells you where he has hidden valuable items. You have to go to a cave, where you will find more enemies, of course. 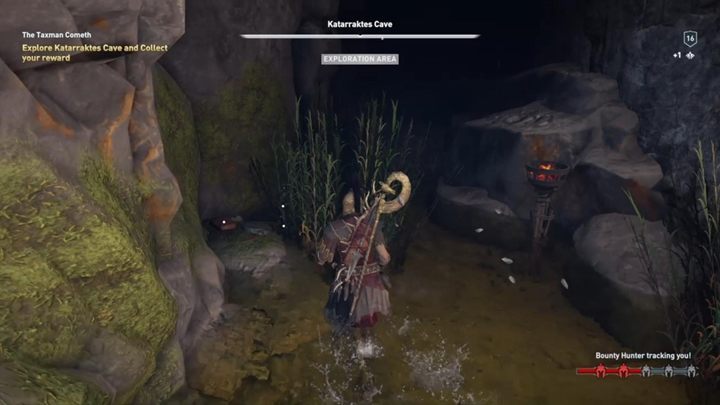 At the end of the location - in the bushes, you will find the mentioned items - the mission will end. Reward: +4900 XP. 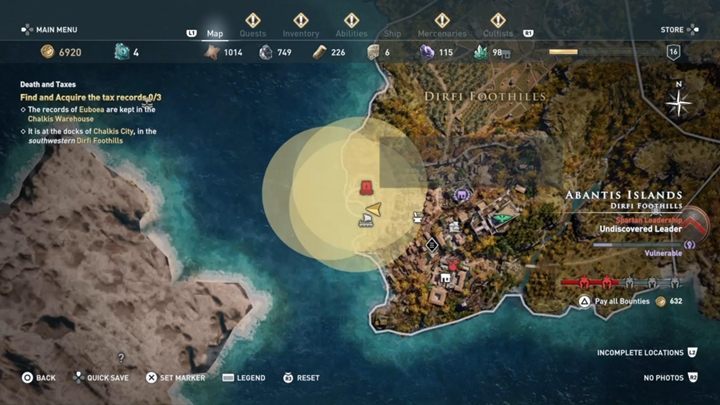 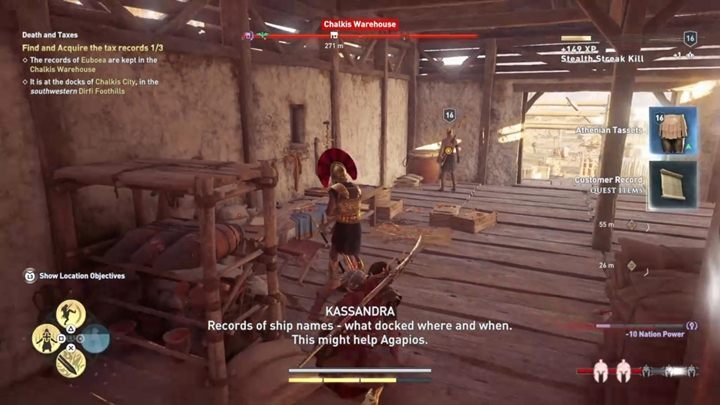 Description: This time you need to get tax records. You'll find the documents in the magazine not far away, but it's occupied by enemies, so take a stealth approach. Take the acquired items to Agapios and you'll complete the quest, gaining +6125 XP.

Quest starting location: Conversation with Agapios, after the previous mission.

Description: To complete this quest, you must first complete next three quests, as described below. Reward: +5400 XP. 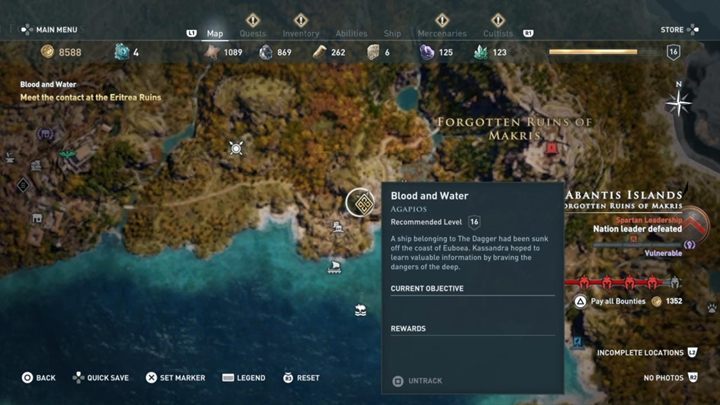 Description: Go to the ruins and talk with a woman who used to be a slave. You'll find out that a ship with a dagger has been sunk not far from you. 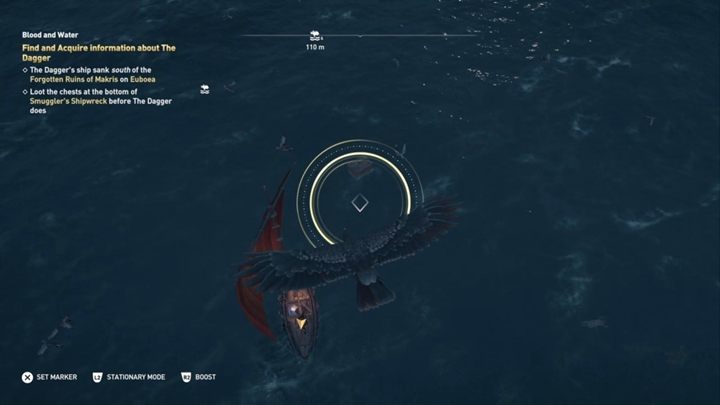 Take one of the boats and swim towards the sea. Use the eagle to uncover the remains you are looking for. Watch out for sharks (you can try to shoot down some of them while on the surface) and swim to the chest. Pick up the dagger and go back to the woman - you have to deal with a group of bandits on the spot. After all, talk with the woman and complete the quest. Reward: +6125 XP.

Dagger in the Heart 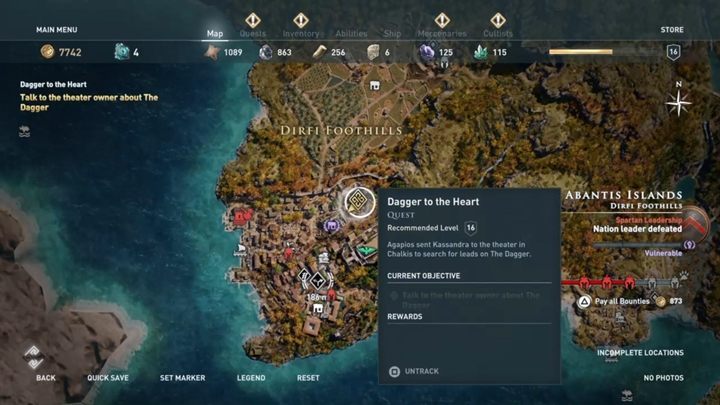 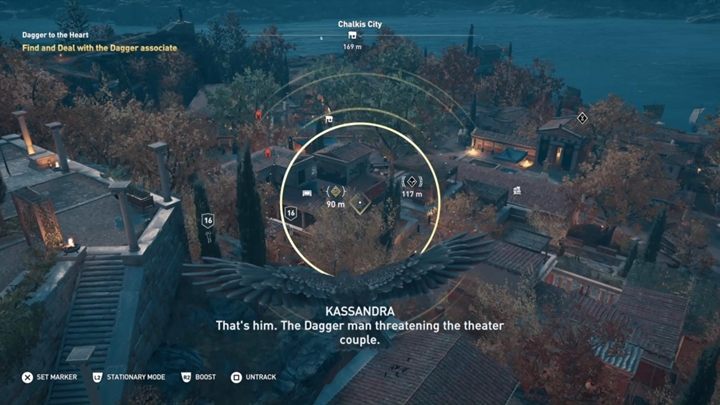 Description: Go to the theatre and talk with the couple. Your quest is to kill a man who resides in a temple near you. You will have to fight with the guards and the mentioned man. After the fight, you can decide whether to talk and save the man or simply kill him. 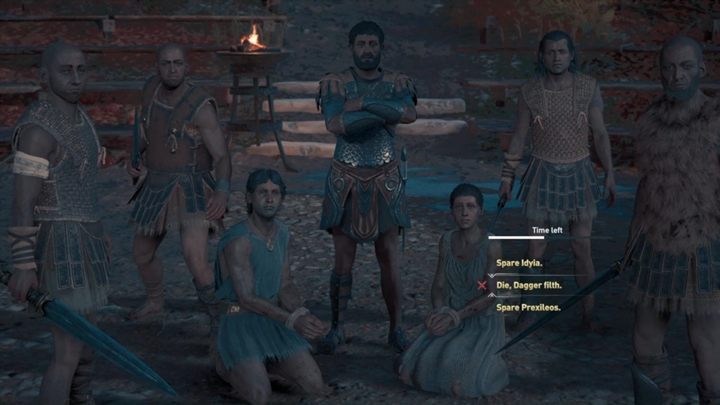 Come back to the couple and you will see that they are surrounded. When you talk to the bandits, you will have the choice of who to save. You have to choose - if you attack villains, both lovers will die. After your choice, kill the rogues and the quest will end. 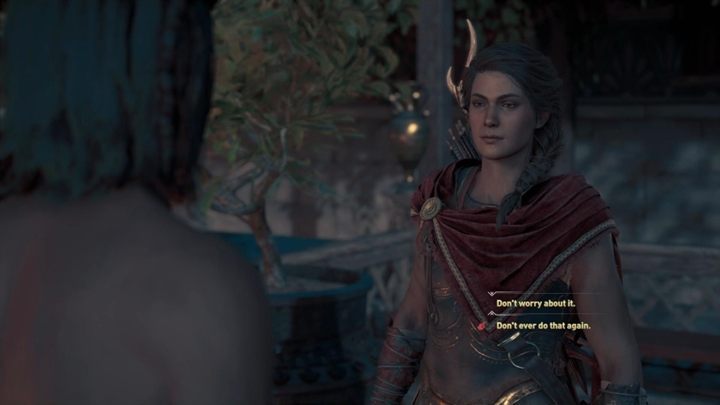 Description: Go to the farmer. On the spot you will have to deal with a group of bandits. When you do this, talk with the man, and this short quest will end, rewarding you with +4900 XP.

The Kingfisher and the robin 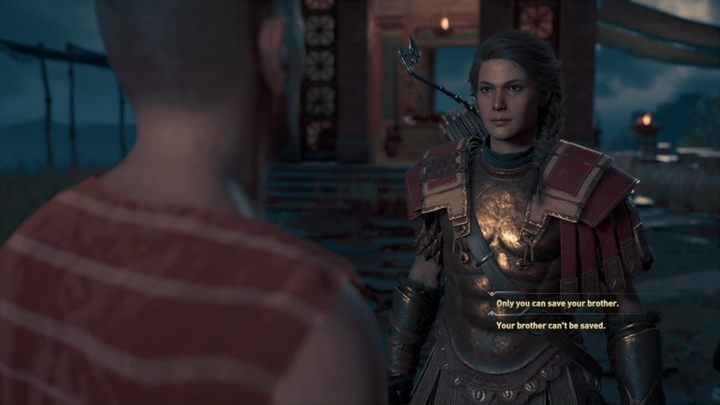 Description: It's time to finally finish the case of the two brothers. Swim to Skiros, where the docks will have a welcome committee on you. Defeat your enemies and run to the Achilles Temple. You will find two brothers there and you will have a dialogue with Agapios. You can let him try to save his brother - unfortunately, this will result in the death of a man. You will have to fight against the Kingfisher. Kill the man and you will put an end to his murderous zeal. Finally, talk to the manager and you'll finish this long chain of quests and get +5400 XP.