This page contains walkthroughs for the following quests available in Assassin's Creed: Odyssey: Learning the Ropes, Equal Employment Opportunity Program, A Journey into War, The Athenian Treasure Trove, Crumble and Burn, One Man Army, The Final Push and The Wolf of Sparta. 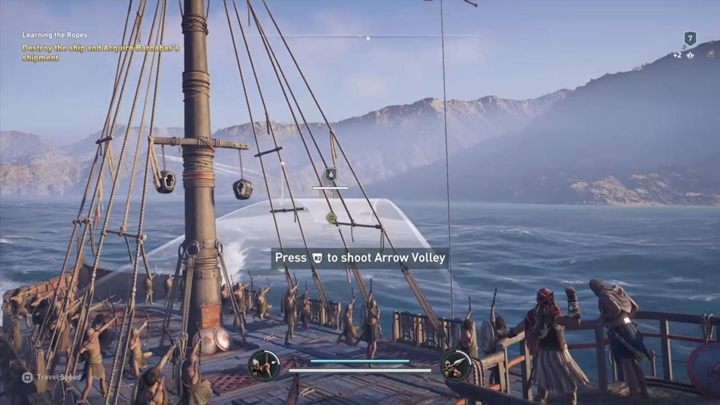 You are now a ship's captain. From now on the game's world becomes more open. Spend a moment to learn the controls. Then, you must head to the ship with Barnabas' cargo. Time for your first naval battle - use arrows and spears to deal damage to your enemy and then destroy them by ramming your ship into theirs.

The mission ends and you get 1,900 XP. From now on you can travel on seas, board other ships and even fight with mercenaries who follow you on their large ships. 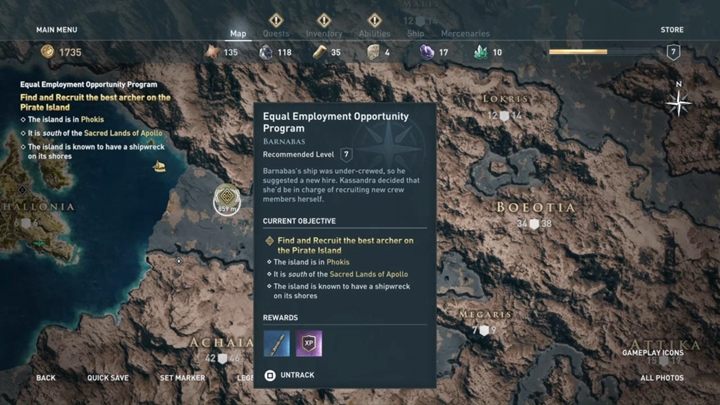 Your new quest is to reach a small island where you have to deal with a group of bandits. Look at the picture above and head towards the place marked on the map. 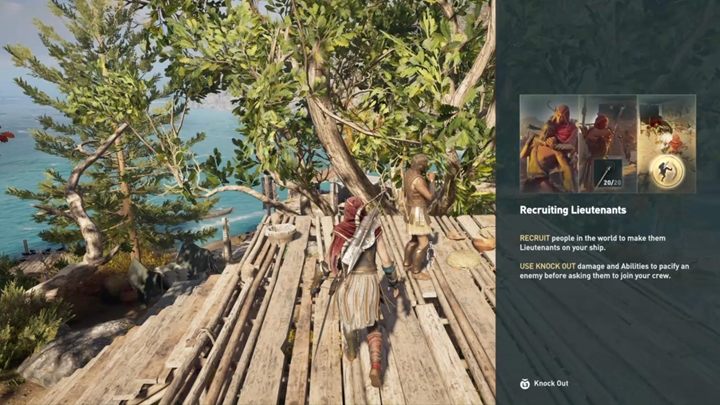 The game informs you that knocked out enemies can be recruited to your ship's crew. Remember that enemies must be stunned and have a small amount of health. One of the best ways to stun them is to, i.e. kick them near the end of a fight. 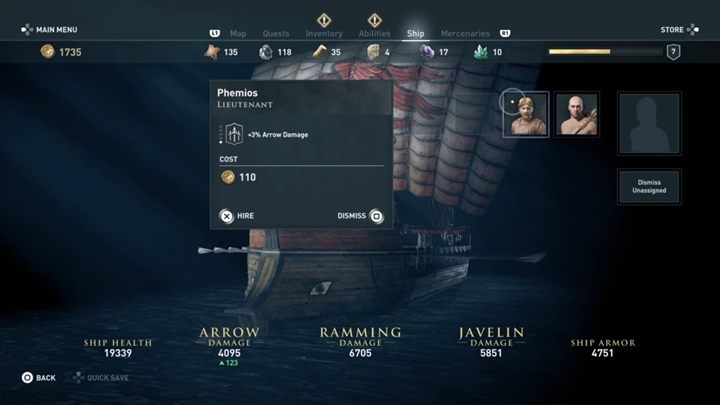 Open the ship's window and assign the recruited bandit as a lieutenant. This slightly increases your ship's combat capabilities. Go back to Barnabas and complete the quest. You receive 1,900 XP. 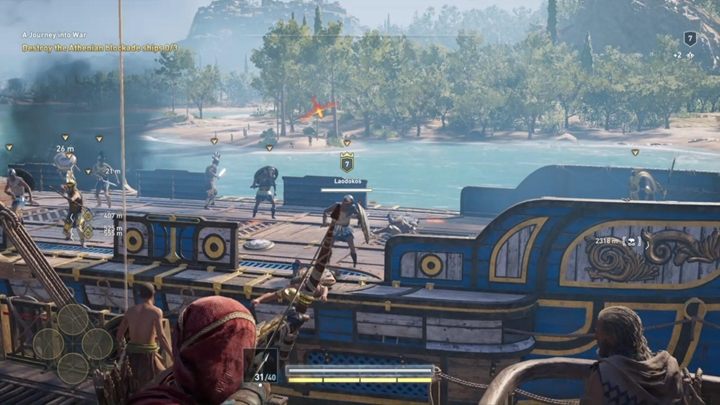 Reach Megaris. Notice three Athenian ships near the land. Destroy them - focus on weaker ships. Approach them from a side and ram into them. You can board larger ships when their "health" goes down to zero. Defeat their crews to collect valuable items/resources. 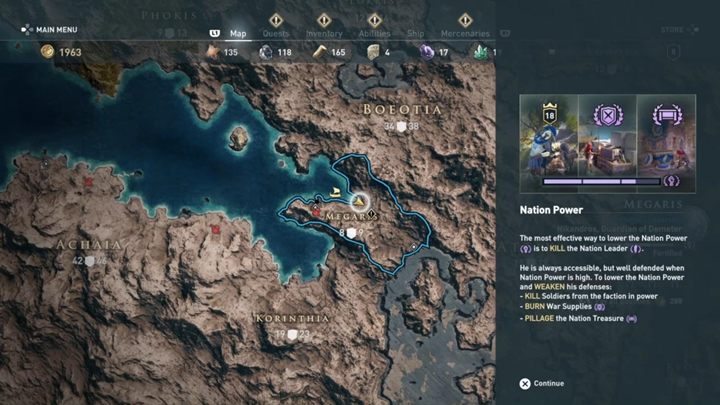 You finally reach the land. Watch two cut-scenes and then speak with Stentor. Regardless of your dialog choices, you must prove your worth if you want to meet with your father. The game now shows you a few new mechanics: how to pay bounty for your head, how to conquer areas and how to weaken a region's military strength. The quest is now complete and you receive 1,900 XP.

Your new objective is to weaken Athenian forces in Megaris. Try to complete all "optional" steps related to that objective. They are rather short but they will reward you with a lot of XP. They will also make the upcoming battle easier for you. 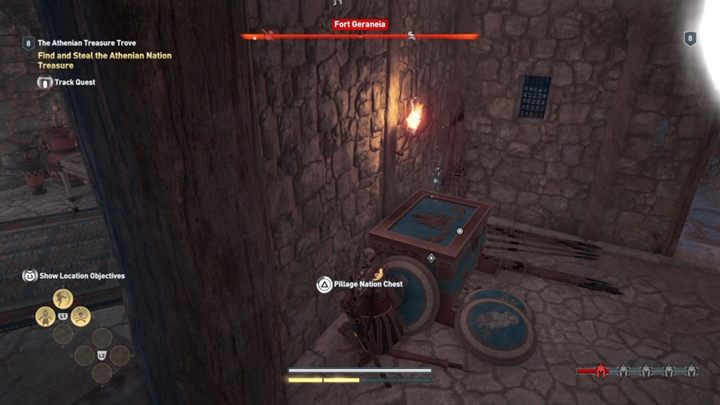 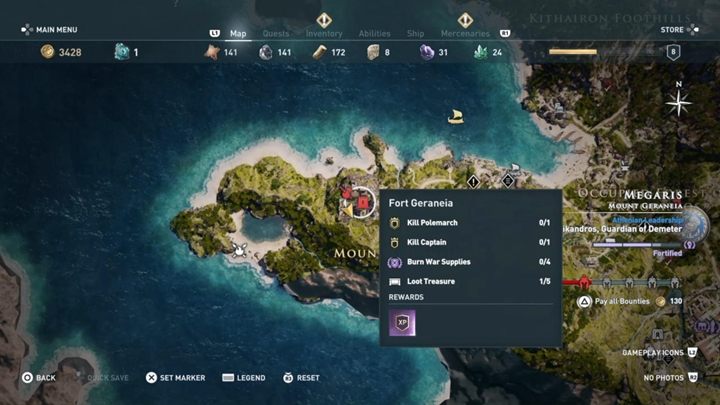 A simple and short quest. Go to Fort Geraneia and steal the Athenian treasure. Try to complete this mission stealthy - the chest takes a while to open. Reward: 2,100 XP. 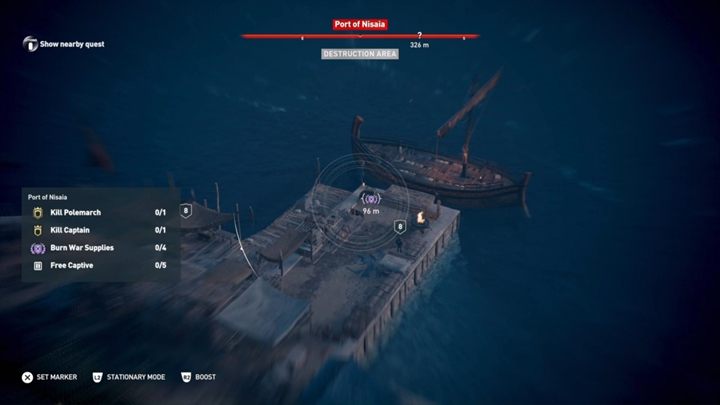 Visit Port of Nisaia. Find four supply chests and burn them. This quest is much more difficult. Start by sending the eagle to locate all the chests and soldiers. Defeat enemies in the places with chests and then burn them with a torch. Reward: 2,100 XP. 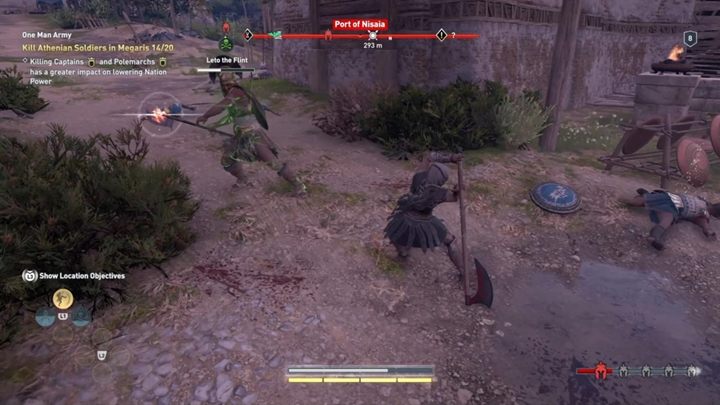 This quest is done "on the fly". You have to eliminate 20 Athenian soldiers in Megaris. You can complete this goal during the two aforementioned missions. Reward: 2,100 XP. 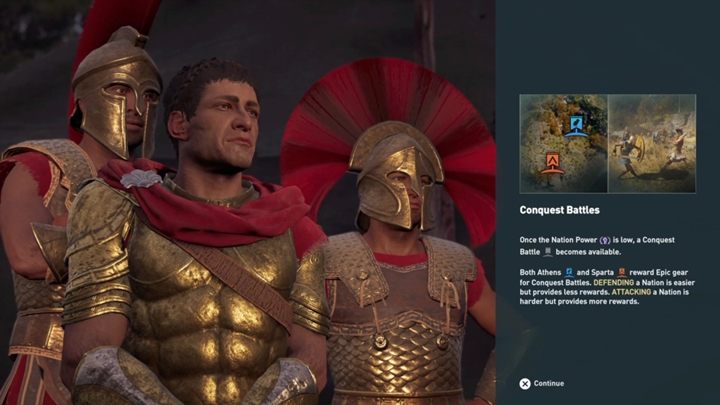 You now have to eliminate the faction's leader - you shouldn't have problems with that. Locate your target - he is alone (provided that you have weakened the enemy forces beforehand). Defeat the target and head to Stentor. Follow him. Time for your first conquest battle. 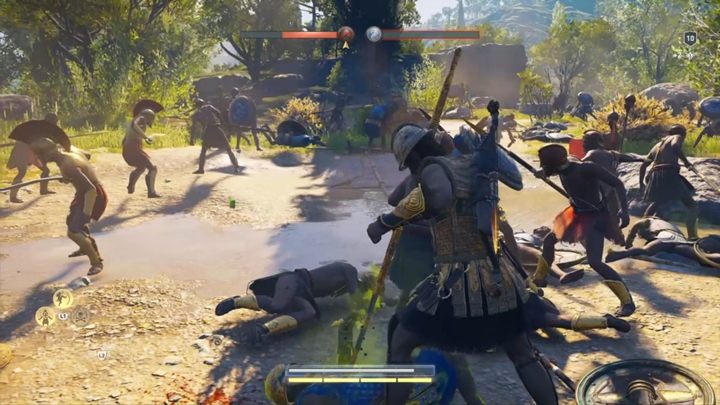 The battlefield is rather big. Your task is to fight with enemy forces. However, killing captains and special soldiers is your top priority. If you have weakened the Athenian forces, you will face a few weaker captains. Don't waste your time on fighting with regular enemies. 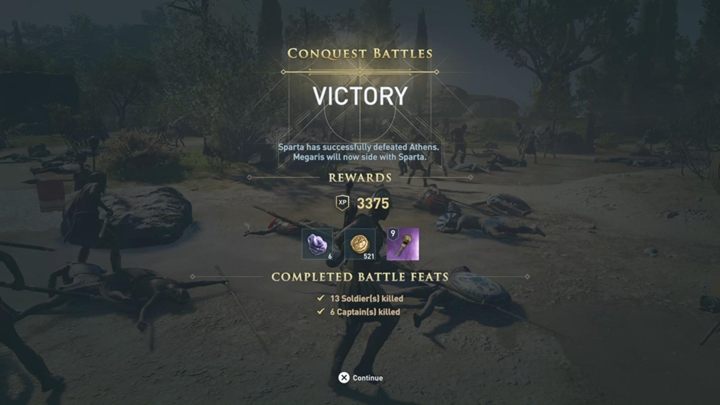 The battle ends when the bar representing Athenian army goes down to zero. Rewards: 3,375 XP, resources and one epic item.

The Wolf of Sparta 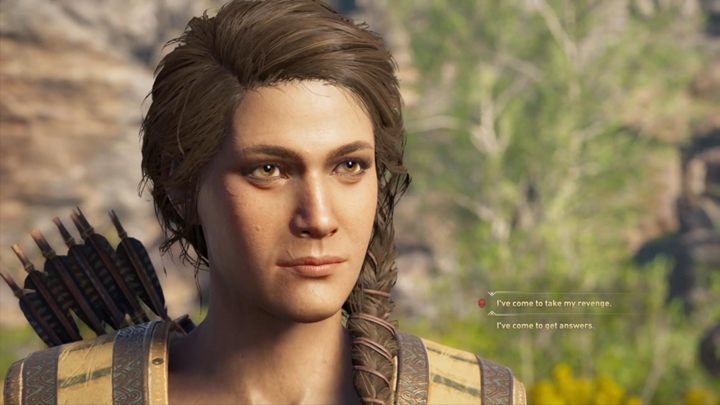 Time to meet with Nikolaos. Run towards the man and then watch a cut-scene. You now have to make your first important decision that will determine the ending of the game as well as certain future events. You can get revenge on your father by killing him or you can spare his life. This choice has been described more broadly in one of the chapters.

If you kill Nikolaos, you will have to confront Stentor. He wants to avenge his foster father. Defeat him to continue the story. Sparing your father completes the quest. Both decisions reward you with 3,375 XP. This marks the end of this quest and the entire chapter.