You can't always rely on stealth in Assassin's Creed: Odyssey. There are situations where facing your enemies in a regular fight is mandatory. This page contains information on how to prepare yourself for fights, how to win them and how to keep your character alive. 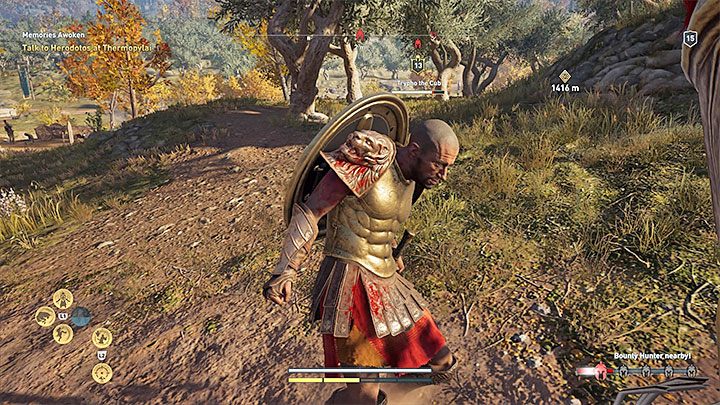 An enemy's experience level is one of the most important factors that has an impact on the difficulty:

Enemy levels are, by default, displayed above their heads. Also, the game uses red color to mark enemies that are at a higher level than yours. Scout the area with Ikaros whenever you can - thanks to that you will be able to check your enemies' levels in advance and avoid fights with them if they are too powerful. 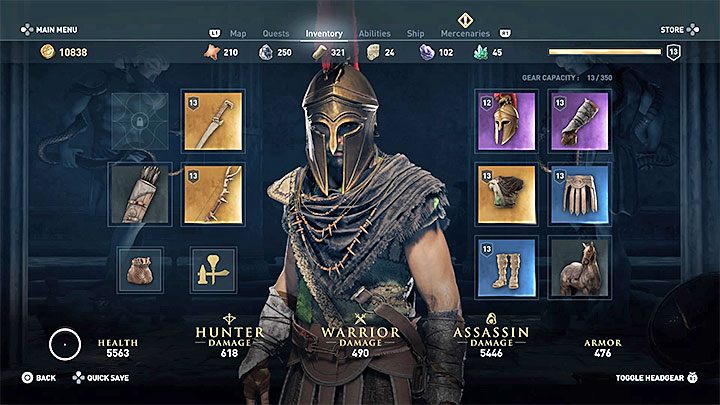 Level and stats of your items are also important in your preparations for a fight. For example, a hero at level 10 who uses level 5 equipment can have serious problems with attacking enemies who are also at level 10. Your attacks may be too weak while your enemies can hit you really hard.

Try to have all the slots equipped with items that are at your current level or close to it. The difference in levels shouldn't be higher than 2-3. All items can be upgraded at a blacksmith. However, this process costs a lot and it requires you to own the right materials. You should upgrade only the most important items (e.g. your main weapon) while the rest should be replaced with new gear. 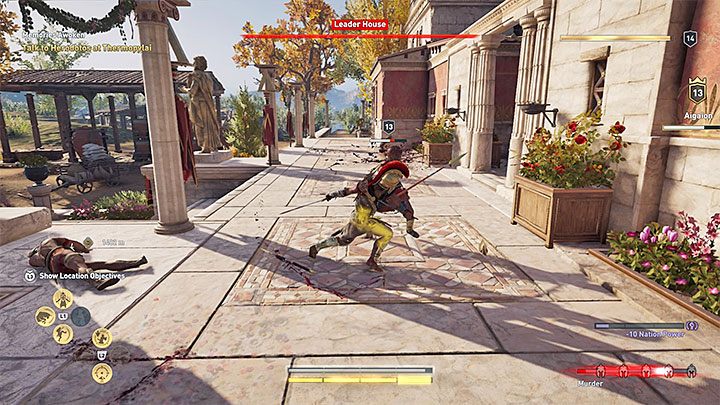 Next is your weapon choice. There are a few types of melee weapons but they can be categorized in two groups - slow and fast. Fast weapons are generally better (swords or daggers). Thanks to them you can react faster to your enemy's movements. Also, they give you a better chance at damaging your opponents. Powerful and slow weapons are great for attacking larger and better armored enemies.

The problem with choosing weapons gets partially solved later in the game. At level 15 you automatically unlock a skill called Man at Arms. This ability gives you a new slot in your inventory window. From now on you can switch your weapons with just one button. Choose one fast and one slow weapon and switch between them accordingly to your needs.

You can also use a bow although this weapon is better at killing your enemies from shadows. Your character can carefully aim at enemies' weak spots or use abilities that grant you extra damage. In open conflicts a bow can be useful when your enemy hasn't reached you yet or when you don't want to attack someone with a melee weapon (i.e. you are waiting for your health bar to regenerate). 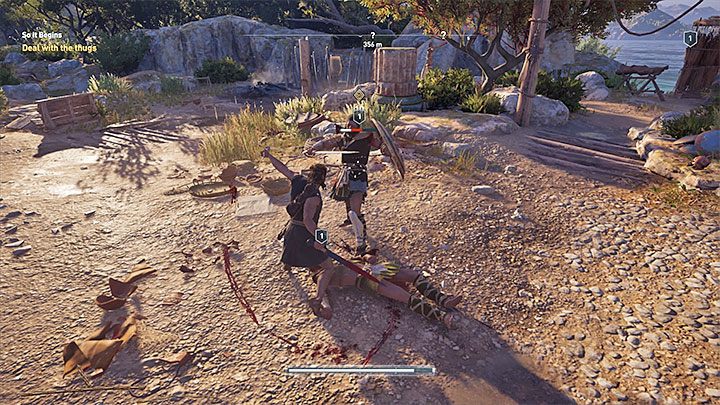 Light and heavy attacks are the two basics types of attacks in the game. You can combine them into simple combos, i.e. start with one or two heavy attacks and then perform a few light swings. Adjust your combos to the current enemies. For example, light attacks are great against mercenaries and other agile opponents while heavy attacks work better against heavily-armored enemies.

Heavy attacks also have another use - they can break an enemy's guard when they are hiding behind a shield. Use a heavy attack to reveal your enemy and attack them with more strikes (see the picture above). This works only on enemies who use small or medium sized shields. You can't break through large shields (instead, you can rely on, i.e. parrying described below).

Locking the camera, dodges and parrying 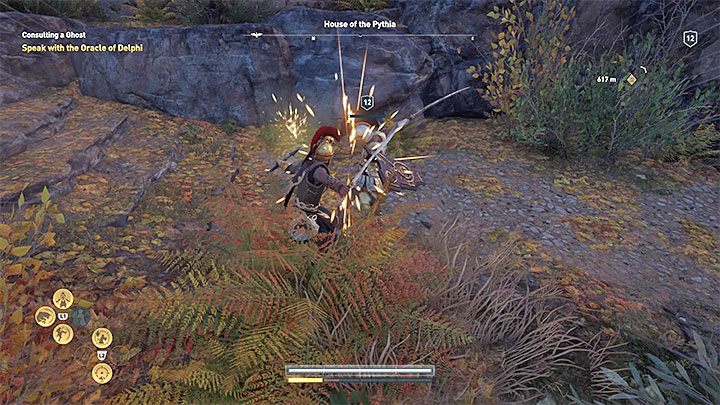 The option to lock your camera on enemies is useful during almost every encounter. Thanks to that you will be able to avoid their attacks and use yours with greater precision. Usually, your character has to fight with a group of enemies - use the right analog stick to switch between them. Do that when, i.e. an enemy on which you are currently locked has moved away.

Dodges are very important in Assassin's Creed: Odyssey - this is the most basic way of keeping your character alive. Regular dodges are enough for the majority of the fights. Remember that you can also perform a roll by holding the dodge button. Use this move when you notice that, i.e. an enemy is about to use a powerful attack (a wide swing or a charge).

However, dodges aren't the only way in which you can defend yourself. Your character can also parry. The default way of using it is to press L1+R1 (PS4) or LB+RB (XONE) - press both buttons when an enemy has started their attack. A successful parry (signalized with sparks) stops the enemy from attacking and makes them vulnerable to your own attacks (see the picture above).

Dodging and parrying may not be enough when you are facing archers. Try to reach them as fast as you can and kill, especially when they are using arrows that can poison or set your character on fire. Some enemies can also switch their weapons during a fight. Stay close to them if you don't want them to use bows. 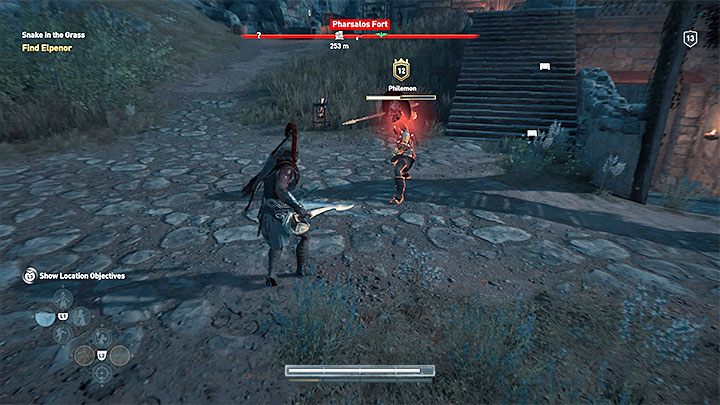 Red glow that appears around enemies gives you important information - the picture above shows an example of that. This glow indicates that an enemy is about to perform an attack that can't be blocked. Don't try to parry, the only solution is to dodge.

The frequency of these unblockable attacks depends on how "elite" your enemy is. All in all, you should always be prepared to use a dodge.

Additional skills of your character 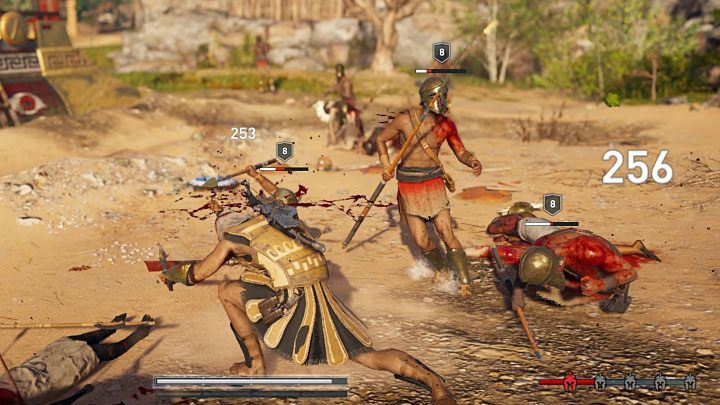 We recommend two abilities that can be unlocked from the beginning. Bull Rush is a great offensive ability which allows you to perform a charge that has a chance to knock enemies down and to deal more Warrior damage. The ability's another advantage is that it can work even on enemies who use shields. The only thing you have to worry about is to aim it carefully. Don't press the buttons to activate this skill if you think that your enemy can move or jump to a side - you will only lose your adrenaline charge. 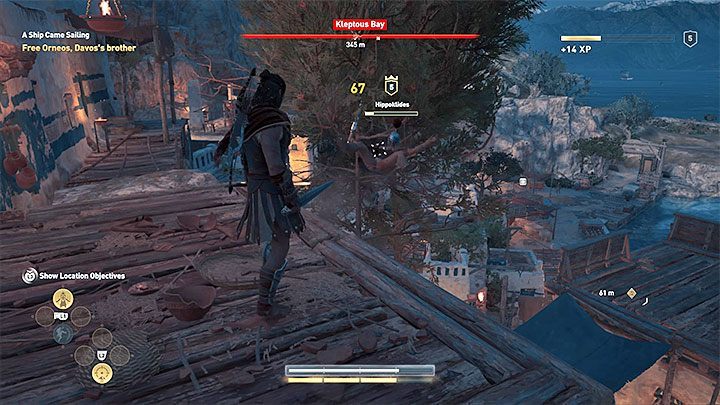 Sparta Kick is another great ability - it pushes enemies back and deals more Warrior damage. This ability works best when an enemy is standing near, i.e. an edge of a cliff - your kick can make that opponent fall down from a great height (they will either receive a lot of damage or die). Be careful to not miss so you won't lose an adrenaline charge. It should be noted that Sparta Kick won't throw an enemy off of a rooftop or a ledge if their level is higher than yours (the difference of 2-3 levels or higher). The ability will only push that enemy backward. The enemy will stay with you on the same rooftop/ledge.

Sparta Kick gets another usage in the later parts of the game. You can use it to stun and recruit enemies. Use it when your enemy has only a little bit of health left to stun them. After that you must approach that enemy and press the right button to recruit them to your ship's crew.

Note - You can "cheat" a bit with Spartan Kick by climbing on towers or high stone ledges. After that you can peek out so that enemies can notice you (or you can, i.e. use your bow). Then, you can kick them when they get closer to your character. A great method for killing mercenaries, fort commanders and other enemies with longer health bars. Even a stronger enemy can die immediately due to fall damage.

Of course, that is not all. The game features numerous useful skills such as: 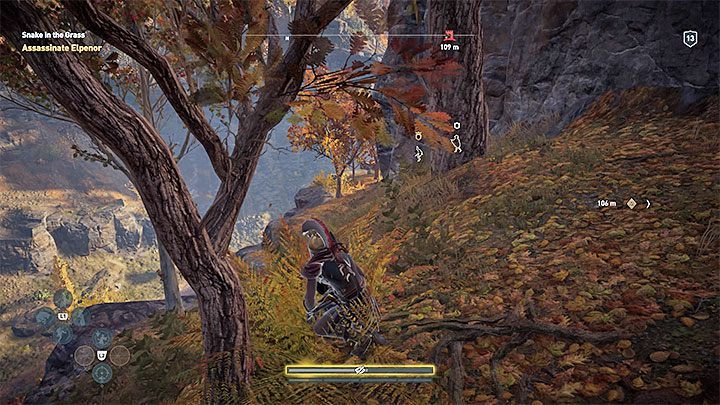 In Assassin's Creed: Odyssey, your health bar doesn't replenish automatically during a battle. This means that you have to pay close attention to your pieces of equipment. Also, you will have to use a lot of dodges, parrying and other defensive abilities. Luckily, there are three alternate ways of replenishing health.

The first method is also the least troublesome. Your character gets a little bit of health points back whenever you use an active ability. This method doesn't allow you to fully heal your character in a fast and easy way, but the extra few health points will help you survive longer on a battlefield. Try to use your adrenaline on a regular basis, don't fight with a full and unused adrenaline bar.

The second way is to unlock Second Wind active skill (you must be at level 5 or higher). It allows you to spend adrenaline points on regenerating health. On the easiest difficulty, you will replenish 1/4 of your health. Map this skill to one of your buttons and use it when your character receives serious wounds.

The third method is to run away and hide somewhere safe. You don't have to leave your current location (i.e. a fort). The health bar will start regenerating as soon as you lose your pursuers. After that you can go back to the fight. In the meantime, your enemies won't replenish their health or respawn.

Allies on a battlefield 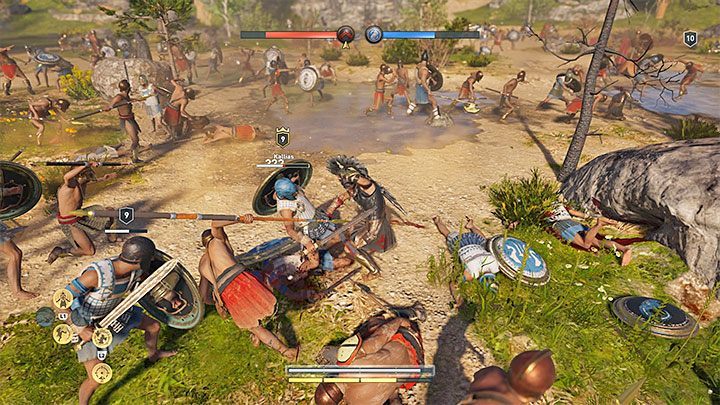 Allies can accompany you during certain battles, mainly during Conquest fights. However, you can also be accompanied by other characters during random encounters on the map or during quests.

Regardless of circumstances, you should use the fact that enemies are busy with attacking your allies - perform heavy attacks on them. You have a higher chance that they won't dodge your attack or turn around to block it. However, larger battles also mean that you have to be very careful - your character can be suddenly surrounded with enemies or be attacked from behind. Remember to be on the move.

Note - In Conquest, you should pay attention to the bar that informs you about allied forces' strength. Depleting it fails the fight. Conquest battles are described more broadly on one of the separate pages of this guide.