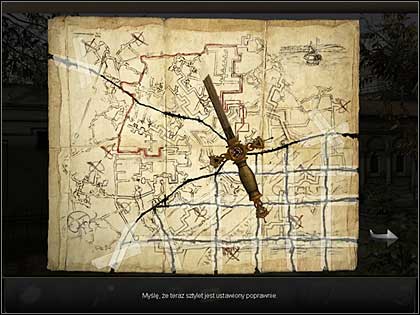 The dagger needs to be placed in such a way that the sun on its hilt matches the ornament on the map, where the key had been laying just a moment ago (drag it to the spot suing left mouse button). And the triangles should match the triangles on the map (rotate it with right mouse button until Nicole confirms the position). 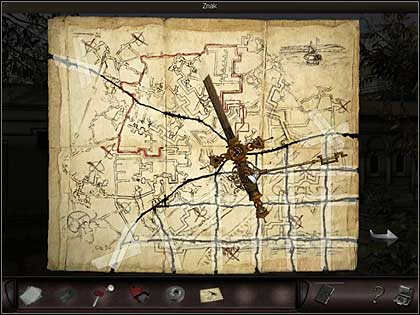 There is a spot in the hilt (more or less in the middle) where the key should be placed (no comments this time, just drag the key onto the symbol on the dagger). 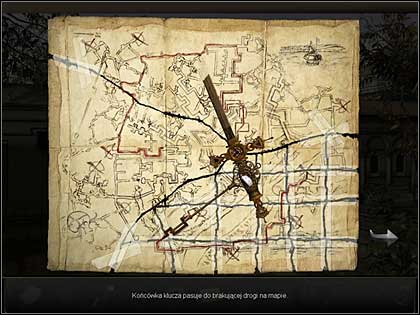 Just like before (right clicking on the key) Nicole turns it to set another part of the way (she makes an appropriate comment). 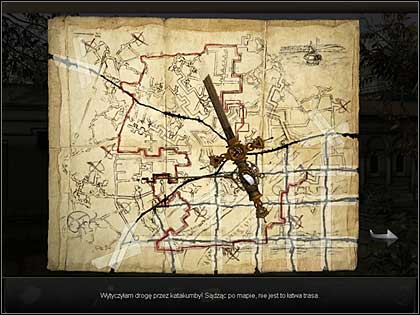 She informs Carnot that she's done, but he doesn't hold onto his part of the deal - trying to make sure Nicole won't act against him, he takes Jack along. Miss Bonnet is left with one of the goons, but her FBI training kicks in and a moment later she's entering the chapel holding the goon's gun. On entering the catacombs she realizes that she won't be able to take the stairs on the left and instead decides to use the metal hook hanging from the ceiling.

She needs a rope however, so she returns to the surface and heads to the alley where she's seen a rubber hose (on the left; it can be found in the location next to the catacomb entrance). Attaching the hose to the hook she goes down.

On the bottom she finds an old plank on the right side of the room and a rope on the left. Taking both items she takes the central staircase down.

Water blocks the way forward Nicole needs to create a missing part of the track - to do that she attaches the rope to the hook in the wall and ties the plank to the other end. Using the platform she just created she continues to the right.

After passing the trouble spot she continues on to the right until she reaches Louis, Jack, and the solution to the mystery.

Art of Murder: Hunt For The Puppeteer Game Guide & Walkthrough is also available in our Mobile App