On the other side of the wall Nicole heads towards the main entrance only to realize that there's also some security inside of the building. She uses the cellar window (the first one on the right side of the stairs) to get in.

Inside Nicole finds Jack Dupree tied down and gagged. She cannot get much out of him without removing the silver tape, but after she does, she asks him about the happenings on the bridge and few other pressing matters, the goes about the basement to cut his bonds. She cannot find any sharp object in the basement, so she decides to go into the hall through door on the left. There's a guard napping in the hall so agent needs to move very quietly. On her toes she approaches the table on the right and picks up the newspaper.

She checks the door on both sides of the hall and proceeds upstairs only to find another set of closed doors. She goes back to the basement and asks Jack about it. She learns that one of the guards has recently lost his keys in the basement. They landed under the iron cast stove. It needs a closer look (close up). Nicole looks under the stove (there are a lot of possibilities here, so it's worth to use hints at this moment - the right spot is the third question mark from the right). There seems to be something in there, but she cannot reach it with her hand - she uses a rolled up newspaper (left click on the newspaper in the inventory) to pull the key closer, and pick it up along with 1 euro coin.

She leaves the kitchen and checks what door does the key fit into. She finds out that it opens the left door on the first floor. Nicole enters the room, slams the door shut and closes it behind her (important!). She goes into the library and takes a look at the picture above the fire place and the trinkets standing on it (zoom in). She takes the picture of Louis and his brother and the ornament square (on the left) and the statue (on the right).

Now she approaches the bookshelf (on the right) and takes a closer look at the shelves in the center of the bookshelf (close up). She takes the book off the middle and the lower shelf and then removes the very shelves. There seems to be a hidden door here, and behind it another set, with an engraved ornament. (zoom in). 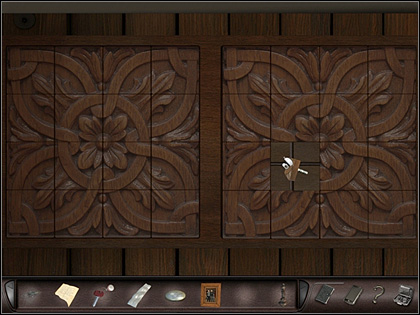 The goal of this puzzle is to create two identical ornaments by moving pieces of the one with the missing square. After setting the puzzle right insert the square you found on the fire place into the hole.

The door reveals a short corridor leading to a hidden room. Nicole enters it and browses through the rubble on the table to the right (close up). In a wooden box she finds a second map piece. 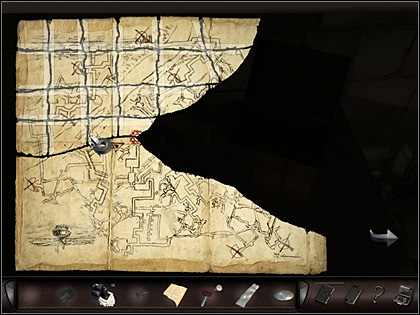 She places it next to the first piece (click on one of the pieces while holding the other) and takes a close look at them (right click) trying to make them match (you move the pieces with LMB and rotate them with RMB). When she manages to crate a bigger piece of the map she makes it whole with the sticky tape.

When Nicole gets back to the library she decides that being caught with the map I Carnot's house may not be wise. In order to secure the map she wraps it around the statue and secures with the silver tape. She then approaches the window on the left and throws the statue out (you need to do all of this before the time runs out. Just after she does it, she gets caught...

Nick saves the day and makes Nicole act according to his advice - get into the phone booth and c calls his acquaintance. She then goes back to the bike (zoom in). Starts it up and leaves.