When she gets to Jack's apartment door (close up) Nicole finds out that she has no way of getting in the traditional way - through the door, as they are secured with police tapes. Remembering the open window she goes a level down and gets out onto the elevation. She moves along the elevation left, towards the only window with light on the other side. When she reaches it (close up) she takes four pieces of grating: one from the windowsill on the left and three from the damaged grating. She then climbs up using the metal rungs on the side of the building (just click the window on the right level - 2nd to the left).

Beneath the window (being part of Jack Dupree's apartment; press the door handle symbol; zoom in) Nicole finds out that even though the window is open it is block and cannot be opened wide. She needs something to disable the lock. She moves right to find two boards, laying on the elevation then goes on right, towards the chimney (zoom in) with an old antenna on top.

Before she climbs up towards the antenna she needs to create some rungs on her own, using the pieces of the grating and boards. She places the pieces into the holes in the wall and puts a board on top of every pair. Now she climbs up and reaches the antenna, or to be accurate a piece of wire (you need to zoom out from the steps you created and click on the antenna on the chimney).

With the antenna in her inventory agent can now get back to Dupree's apartment window. She bends the wire (left click it in the inventory) and then tries to reach the lock to open her way into the apartment. After dealing with the lock she gets into the apartment and starts by looking behind the closet (on the right). Where a lone bicycle wheel is standing. Out of it Nicole extracts a spoke.

She then goes on to examine the desk (close up) which has been unavailable before and takes a closer look at the map on the right (zoom in) with a wind rose painted using a few colors (important!). She picks up the key ring (which is also a flashlight) lying in the middle of the desk. She also takes a look at the open drawer using the flashlight to see through the darkness.

Now she can penetrate it and find a hole on its right side suggesting that the drawer has a false bottom. To check it she pulls the drawer out a bit (just left click on the handle) and uses the spoke to lever the false bottom. Underneath she finds a piece of paper with some kind of code and a pivot key.

Then agent takes a look at the hooks affixed to the paneling - the hooks have to be turned according to the code (on the piece of paper you found) and the geographical data from the wind rose (from the map on the desk). Since the last hook is missing, Nicole uses pivot key instead. 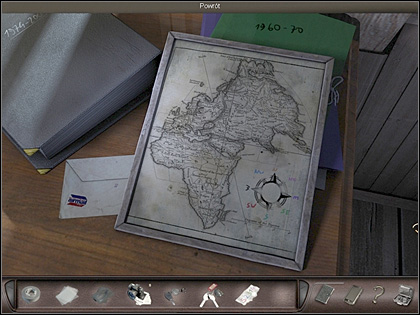 The code (52314) gives the directions on how to turn the hooks (for example, the first one to be turned is the fifth hook), and the description on wind rose the final position of each hook. The colors connect the number with directions. It should look like this: 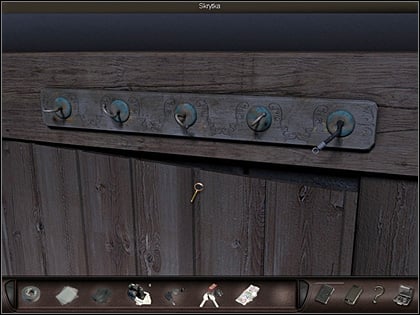 1) the first hook to be turned is number five (red 5 is the first digit of the code) and it should up in the South-West position, same as the red marker on the map;

2) the second hook is number two (blue 2 as the second digit of the code) and it should end up in the North-West position, same as the blue marker on the map;

3) the third hook to be turned is number three (green 3 is the third digit of the code) and it should end up in South-East position, same as the green marker on the map;

4) the fourth hook to be turned is number one (black 1 is the fourth digit of the code) and should be turned West, same as the black marker on the map;

5) the fifth hook to be turned is number four (pink 4 is the last digit of the code) and it should end up in the North-East position, same as the pink marker on the map.

So to solve the riddle you should click the last hook 5 times, the second 7 times, the third 3 times; the first 6 times and the fourth 1 time (in this very order, the right setting can be seen on the photo above).

Success will result in the panel moving, revealing (zoom in) Jack's stack of letters from Marc Taine and a casket with a notebook. Nicole cannot resist reading the notebook (left click on the casket in the inventory to separate them, then click on the notebook to read it). Just after she's done reading she hears footsteps and has to hide quickly, preferably in the closet (a timed event).