The Artifact is a rather complicated and complex card game and one of its main modes is draft. This mode requires good knowledge of the cards and the ability to stack the deck skillfully. A bit of luck may also be a key factor here. In this guide you will find the most important rules that you should follow when completing a deck. You will get to know the strongest cards of each color, how many colors you should choose and what to follow when selecting your heroes. You won't win every draft, but you may definitely increase your chances of winning.

This guide also includes information about Constructed mode. Here you will find ready-made tournament decks and find out what cheaper equivalents you can use to replace the most expensive spells and Deck Heroes.

Is Artifact a Pay2Win title?

Yes and no. It all depends on the game mode you want to focus on. In the draft mode, the cards you have do not matter at all. All players play with decks folded from completely random sets, in which they can find every available card.

Constructed mode can be considered as a "The Pay2Win mode". It consists in playing with decks composed of your collection of cards. You build this collection by buying random boosters or cards selected on your own on the Steam market. In Artifact, some cards are much stronger than others, so if you have them, you gain a huge advantage. On the other hand, thanks to the Steam market, nothing stands in the way of buying one of the best tournament decks from the very beginning. Cards can't become stronger anymore, so by making such a purchase you are automatically at the highest possible level.

How much does Artifact cost? What do you get with the basic game set?

Artifact is a paid game that costs 19,99 $. The price includes the game, two basic decks, 10 random sets of cards (each containing 12 cards) and 5 tickets to play in selected modes. Will such a set be enough to play comfortably?

Call to Arms - free of charge and equally

Call to Arms is an event that lasts for some time and allows us to play one of the 5 ready-made and fairly evenly balanced decks. This is a completely free mode, the most important feature of which is the fact that all our rivals also have access to the exact same five decks. This way nobody has any advantage over the opponent, because your collection of cards does not matter. This mode is likely to change dynamically or appear periodically.

The two initial decks are quite weak if you plan to play in Constructed mode, where players create decks from their card collections. If you hit an opponent with better cards, you may feel a little helpless in such a duel. In this mode you can't do well without the need to improve your deck with cards from random sets. However, the best solution is to plan a deck or download it from the web, and then complete your collection on the Steam store. You have to pay about 50 - 75 $ for the best decks, and about 25 - 50 $ for cheaper but not so weak equivalents.

In order to reduce the price a little, you can sell unnecessary cards from the initial 10 sets. If you were lucky, they may contain cards that are worth even 10 - 15 $. Although the prices for the best decks seem to be very high, it should be remembered that the purchased cards can be sold at any time. This way players can regain most of cash they've spent. If prices are stabilized, you will lose 15% on such a transaction, which is a tax on transactions on the Steam platform.

The alternative is to buy random sets and expect to get lucky in obtaining the card you need, which is very valuable. Opening boosters is a very pleasant activity, but still not very profitable. The market is definitely a cheaper and more reliable alternative.

A much cheaper alternative is Draft mode. In this mode everyone folds their deck by choosing cards from completely random sets. Such a deck can be used to play a maximum of 5 games or until you suffer 2 defeats. Draft has several versions:

In our guide you will find practical advice on drafts and the classification of cards according to their usefulness.

Is it possible to earn money while playing Artifact?

Theoretically yes. In the basic set you already receive 10 sets of random cards. If you plan to play only Drafts or other free modes, you can easily put your entire collection on the Steam market and recover part of the amount spent or even earn money if you are lucky.

Besides, playing Expert Drafts you spend $1 per ticket and you have a chance to win more sets of cards for sale. However, it should be remembered that the game tries to choose players at your skill level. In the long run, you should only win 50% of matches, and winning a booster requires at least 80% effectiveness. As you can see the chances of earning money are quite small and a lot depends on your luck. On the other hand, the game itself should be pleasant bunch of fun, and earning cash is only a fantastic side bonus of this title. 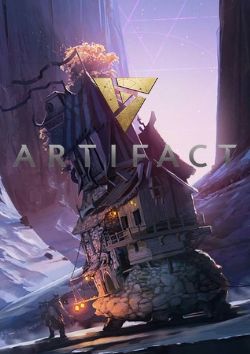 Artifact: The Dota Card Game is a virtual card game developed by Valve company for PC, iOS and AND.

Artifact: The Dota Card Game uses the universe created for Dota 2, in which civilizations are built around magical stones that let them use magic and even resurrect dead. However, the story doesnt play any major role, acting solely as background for characters and items.

Gameplay wise Artifact: The Dota Card Game for PC, iOS and AND mixes collectible card game like Hearthstone or Gwent with features of Dota 2. Each player has his own collection of cards, from which he creates a deck used in duels against other players. The board is made of three lanes on which heroes are placed, each with unique abilities based on their Dota 2s incarnations. Additionally, removing opponents heroes and creatures (the latter controlled by artificial intelligence) awards players with gold, which can be spend on item cards that enhance power of heroes equipped with them.