Go left and click the console with four sea-green crystals. Tommy will use the lacking part ('P') and the console activates. By clicking buttons on the left and on the right side search four symbols from the stories. Set them into the black space below the symbols series. 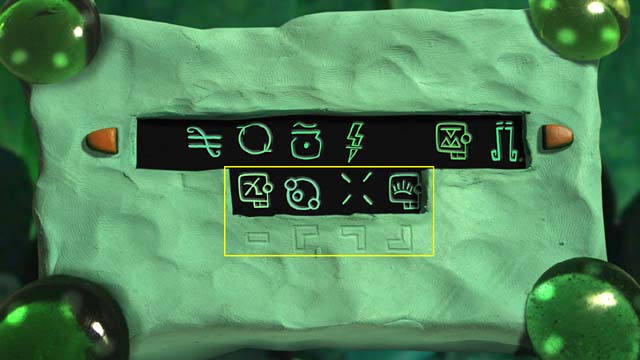 Under this space you can see the symbols of every octopus, so you will know where to put symbols from the stories. The right sequence is on the screenshot and video above. When you do this action correctly, the dome of the device standing on the centre of the room will disappear. Now you have an access to sea-green crystal.

Go outside and turn the crank as many times as you see that the light bulb above the door on the left will light up. You will also see the spiral symbol on the door. Go back to the emerald chamber - now you can get on the platform with the device. Push the red button, Tommy will get rid of all the four crystal. Push the red button once again. The puzzle will appear.

Now you need to set the crystals in the holes of the machine. At first move the emerald button to the second gap (from the left), then put the crystals into the holes. Crystals should be set from the lowest to the highest, but it depends not on their high because some of the holes are deeper than others. 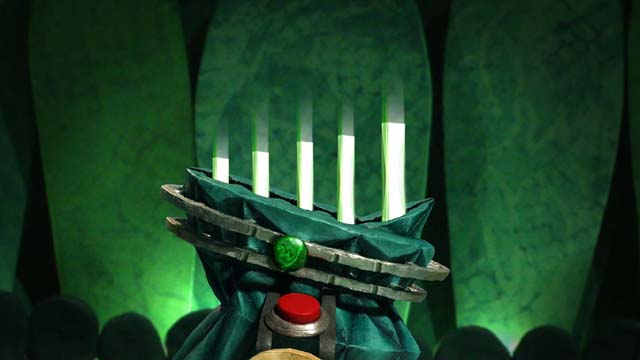 If you start from the original setting, you need to put them in the following sequence: second crystal into the first hole, fourth into the second hole, first to the third hole, fifth to the fourth hole and third into the fifth hole. The right setting is on the screenshot above. Finally push the red button. 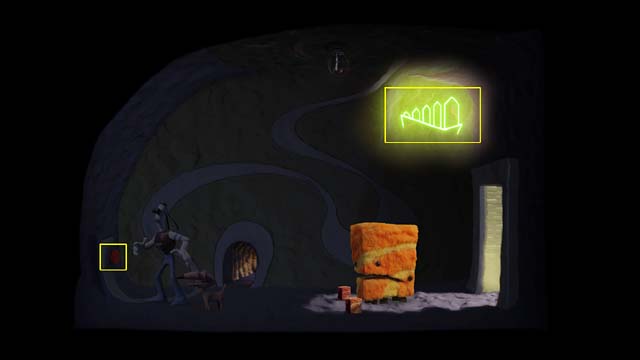 The hint to this puzzle is the picture, which has appeared after pushing the red button on the wall in the room on the lowest level of the tower, where Tommy comes at the beginning of the gameplay.