Wasteland was and still is one of the most popular mods for ArmA II, so no one was suprised when it came over to ArmA III.

In Wasteland you can be a member of two factions : BLUFOR (USA), OPFOR (Iran) or Independent. The latter have no allies, so if you choose this faction, you will be on your own.

The main goal is to survive - there is an idicitator of both hunger and thirst. If you get too hungry or too thirsty, you will start losing health, which in turn will result in your death.

Getting food or water won't be your only concern, since the island has a lot of other players that want to get rid of you.

You start with a PO7 pistol, but you can find many other weapons that are scattered around the island, hidden in cars. You can even buy them in gun stores that are marked on the map. You earn money by killing other players or completing various missions. Missions appear at scheduled intervals, and these usually differ depending on the server. The objectives of those missions are generally simple - for example, at some point on the island there will appear a destroyed vehicle surrounded by a bunch of enemies controlled by AI. The group of players that will reach that place first and kill all the enemeis, will be rewared with a box filled with weapons or money.

One of the most interesting elements of Wasteland is building your own base. There's a lot of building elements scattered around the map, such as sandbags or sniper towers. Such items can be moved and placed into a car, if, of course, there is enough space. 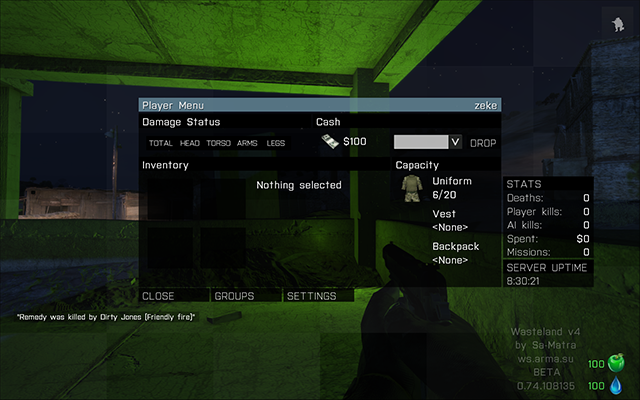