An important element of the gameplay is moving on the battlefield. A strategic positioning is a priority during the exchange of fire and can very often save your life.

To begin with, you should know about the modes of movement. In addition to the default type, of course, there is also a tactical trot, which you can activate by pressing C. You will be a little slower, but your weapon will still be raised, which can be useful in many situations.

You can also use the tactical walk, by pressing two keys, W and S, at the same time. This is particularly important in close quarter locations, because moving too fast can often lead to your death.

Holding down the SHIFT button will make you go into a sprint mode, which will make you move a lot faster but it will also tire you out very quickly. Fatigue can significantly affect your accuracy - your gun begins to swing and that prevents you from being accurate when shooting.

Your soldier moves in an upright position by default, but you can switch to a few different positions that can be useful under many other circumstances. Hold down the CTRL button and then press the S button to change positions. Starting from an upright position you will go down to slightly leaning, heavy leaning and then crouching. From crouching you can go to a more leaning crouching until you get to a sitting down position, from which you can go to prone. While you're proning, you can also lie down on your side, which allows you to peek around the corner. 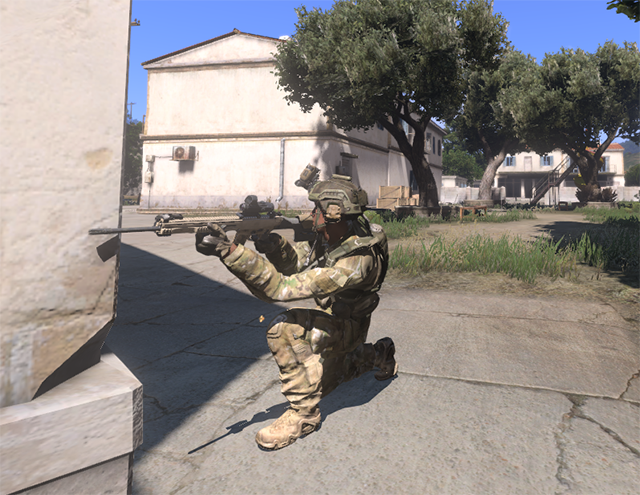 Peeking around the corner

Moving around is important, but very often you will find yourself in a situation where you will be forced to take a defensive position and hold it until you push back the enemy attack.

Peeking around the corner is incredibly useful when you're hiding behind a building. Q and E keys allow you to slightly lean to the side, while CTRL + A or D will mainly lean out your weapon, which reduces to chances of you getting shot.

The difference between Q/E and CTRL + A/D

Leaning by using CTRL + A/D also allows you to return fire at a greater angle, which is often very useful.

These can be used in any position, both crouched, standing and lying down.

Using Q and E keys while lying down makes you roll sideways, and with CTRL + A/D you will be able to lie down on your side and lean out the weapon.

Some of the sights hare also double, so you can switch between them, depending on whether you need to shoot at a close range or at a long distance. You can do that by holding down the CTRL key and clicking RMB.