The below step is the introduction to the key element of the game - combat. It is going to be with you, throughout the majority of the game so, it is best to learn its mechanics beforehand and learn how to read the interface's readings properly. 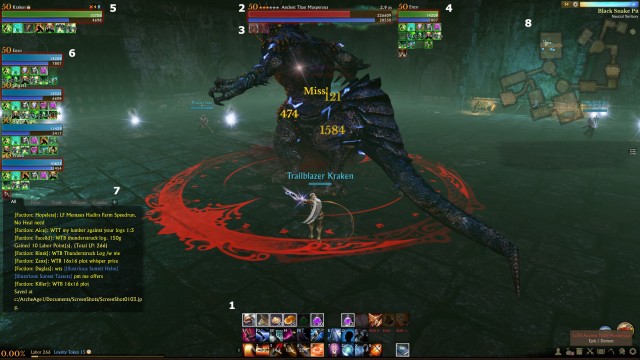 1 - the skill bar of your character. You can decide for yourself, what it should look like. The options in the game ensure much freedom. On the bar, you can see the attacks and spells that are available at the moment, or how long you need to wait, before they will be ready to use again. The skills that are highlighted, and in the orange frame, can be used in a given moment to launch a combination. More about this, in a moment.

2 - aim status bar. Informs you what your aim, at the moment, is (e.g. healing). You learn here, about the name and number of health points and the amount of mana, of the selected ally or enemy.

3 - buff and debuff bar. You learn here which buffs your target is currently using, or what debuffs are active on him.

4 - target attack bar. Informs you who is your target's current target.

6 - party status bar. Just like above, but the information concerns the members of your party.

7 - system information. You can adjust it as much as you want. They can display system messages, chat, private messages, global messages, information on damage, buffs, debuffs.

8 - current location map. You can see there the members of your party, but also important places, important NPCs or the route towards the quest that you are completing right now. Right above, there is a clock that displays the current in-game time and the time of the day. 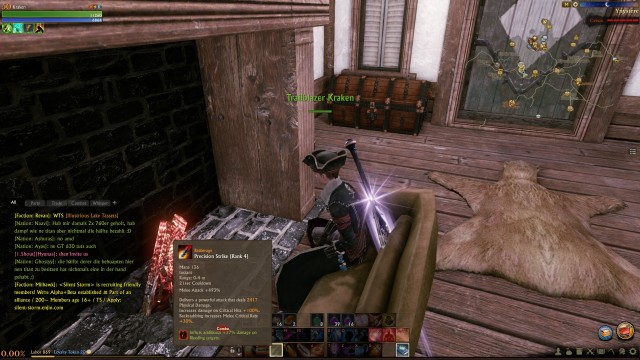 Proper use of the available skills is the key to success, during a battle. Combinations are additional effects caused by the selected attacks or spells, after they are used in a given order. Most usually, they boil down to dealing additional damage, or extending buffs and debuffs. A great majority of them occur as a result of relationships, between skills of various skillsets, which makes some of the skillset combinations imposed by the game mechanics. The other ones, on the other hand, are rarely used. Each of the initiating skills, or one that starts a combination, often has an additional paragraph in the description, which informs you of that. Combinations may also occur as a result of combining two characters - as long as they are attacking the same target.