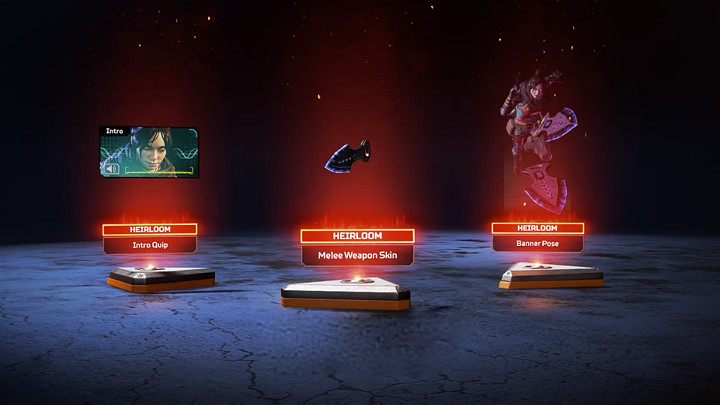 Heirloom is a special, exclusive set for Wraith. You cannot buy or craft it. How to get something that will make other players jealous? Below you'll find all you need to know about special Heirloom set for Wraith.

How to get the Heirloom set?

The exclusive Heirloom set is a reward for opening Apex Packs. As you can read on the official page:

"Currently, Apex Legends contain only a single heirloom set, containing three items for Wraith. When a player opens an Apex Pack, there is a 1% chance of receiving this set. Received heirloom set won't disappear when deleting Apex packs from your inventory. Heirloom sets cannot be crafted using crafting materials. No player can open more than 500 Apex Packs without receiving an heirloom set (applies to players that haven't received all heirloom sets yet). If a player manages to gather all available heirloom sets, he won't be able to receive any new ones until new sets are added to the game."

Taking the message above under consideration, it can be said that acquiring an Heirloom set for Wraith mainly requires a lot of luck when opening Apex Packs. Worst case scenario, the set will be found in 500th opened Apex Pack.

What are the contents of an Heirloom set?

Heirloom set contains 3 special cosmetic items for Wraith. The contents of an Heirloom set are as follows: