In Anno 1800, you can begin a campaign that tells the stories of the Goode family. Missions and adventure chapters show how a descendant of the Goode family tries to cleanse his father's good name, creating a true industrial empire and visiting wild regions of the Amazon.

Prologue - Having a Blast 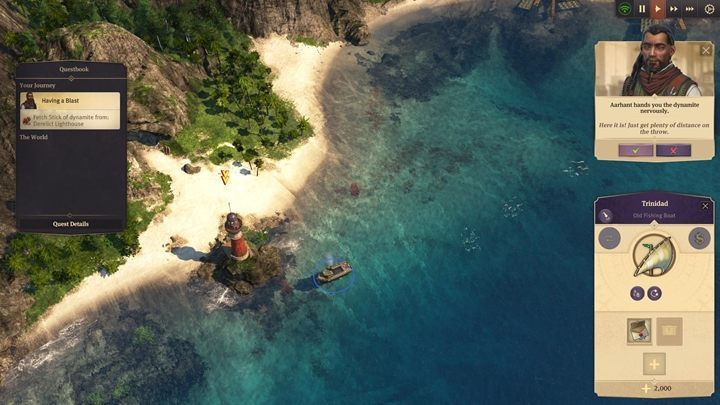 The beginning of your adventure is quite unusual, because instead of building a city, you take control of the ship. After the dialogue, send your boat to the lighthouse and you will gain dynamite. Use the item (you will unlock a new skill) on the shoals of fish and then pick up the fish. Transport them to the city and you'll finish the prologue. You will now see a long cutscene that will introduce you to the story and complicated history of the Goode family. 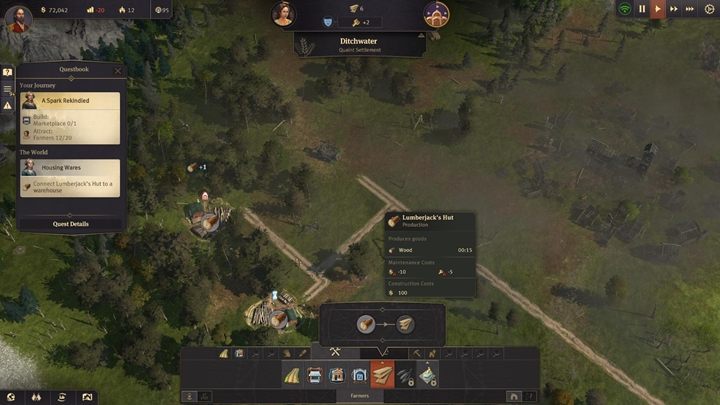 It's time to expand! Your task is to build a Marketplace, 8 Farmer Residence and bring 20 farmers to your settlement. Start by building Lumberjack's Hut, somewhere away from planned cottages, build it next to the Sawmill and Small Warehouse. Then choose a convenient location for farmers' huts and build as many of them as your current supply of wood allows.

The Apple Falls Not Far From the Tree 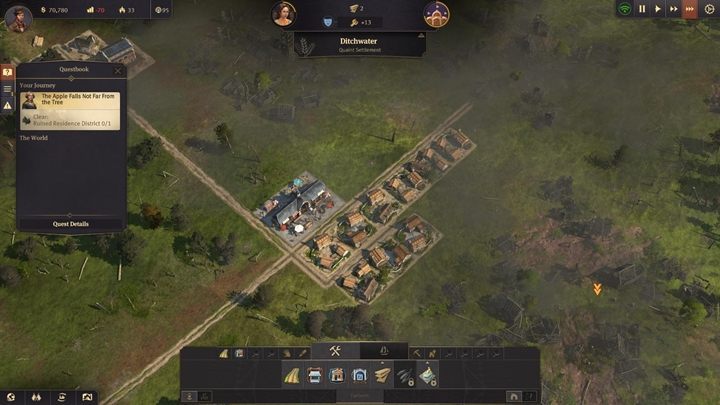 Click on the Ruined Residence District and you'll destroy the old ruins and expose more space for expansion. 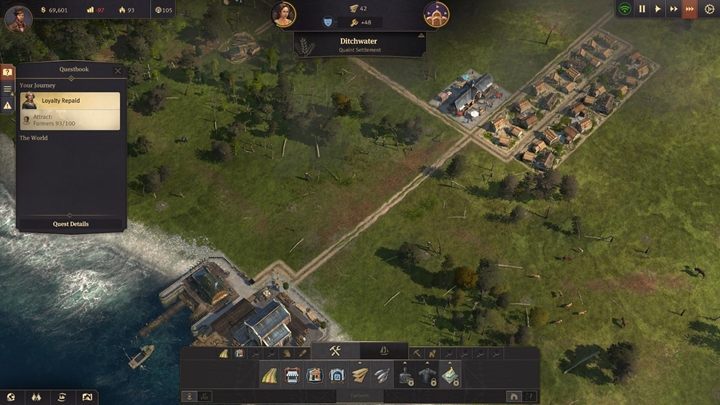 It's time to take care of the stomachs of our farmers. Build a Fishery on the shore and you will be able to fish. This will saturate the inhabitants and attract more people to the island. 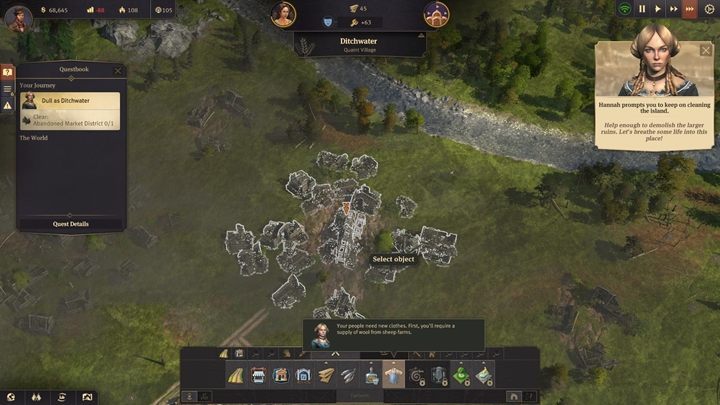 This time you have to clean up the next outstanding structures, click on the Abandoned Market District to be able to go further.

Toast to the Future 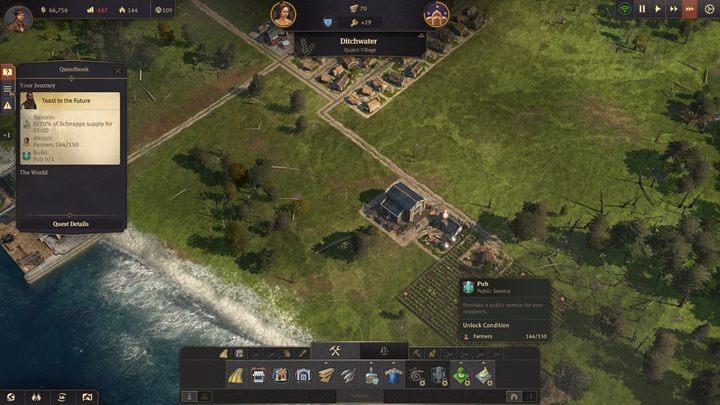 Time for a more complex task. In addition to their obvious needs, your employees demand alcohol, and more specifically, they want Schnapps. Choose a convenient place (I recommend using selected part of the island for farm buildings) and build a Potato Farm and next to Schnapps Distillery. After a while you will start producing alcohol - build a pub near the cottages and you will make farmers happy. 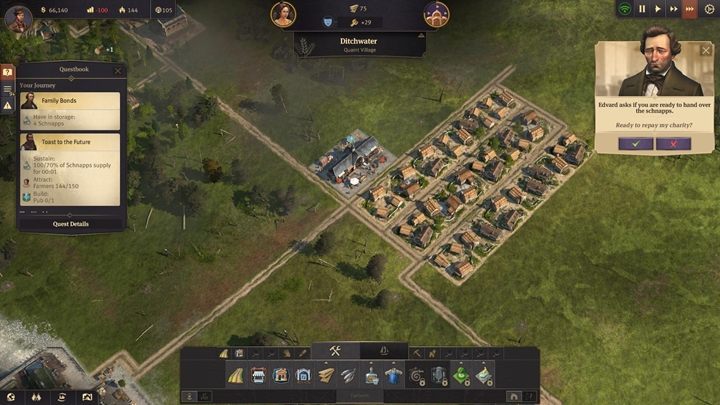 Your business with Schnapps has attracted the attention of Uncle of the main character, who demands that you give away 4x Schnapps. Fulfil his command.

Black Sheep of the Family 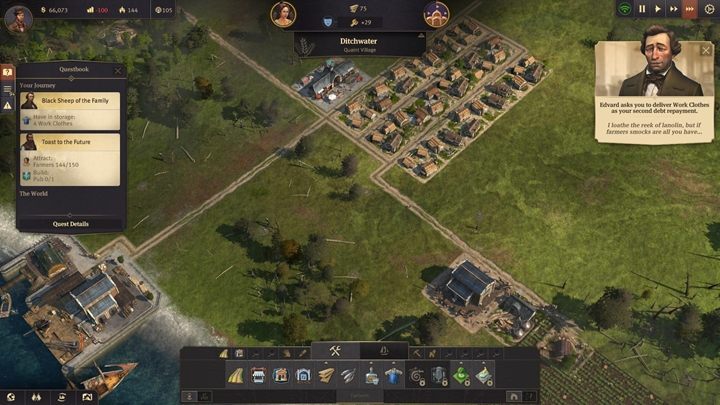 Residents have something to eat, drink.... it's time to take care of better clothes for work. Place Sheep Farm and Framework Knitters to start a new production chain. Set up more farmer huts to expand your population. After you donate 4 Work Clothes to Edward, you will receive new tasks. 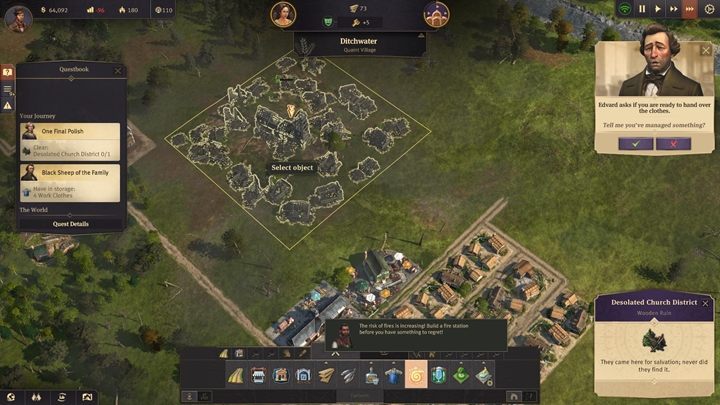 Click on the Desolated Church District to demolish the remains and ruins of old buildings. This will give you new space for further expansion. 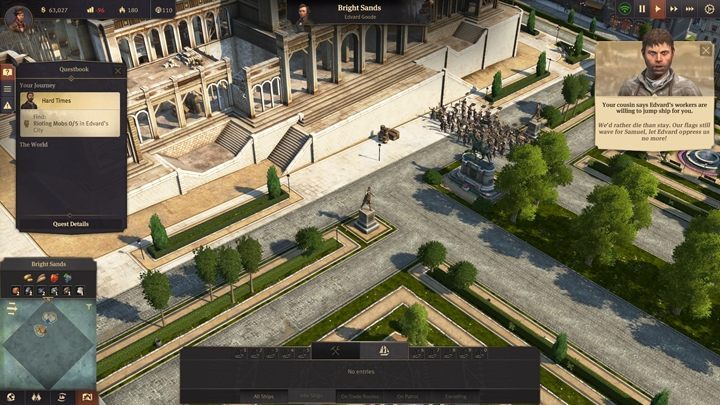 In the city, the main mission is dominated by strikes. It is worth taking advantage of the situation to convince the protesters to join our settlement. Your task is to put pressure on the crowds of people who are protesting in the city. When you click on 5 Rioting Mobs, you will see a short cutscene.

Freedom and the Free Press 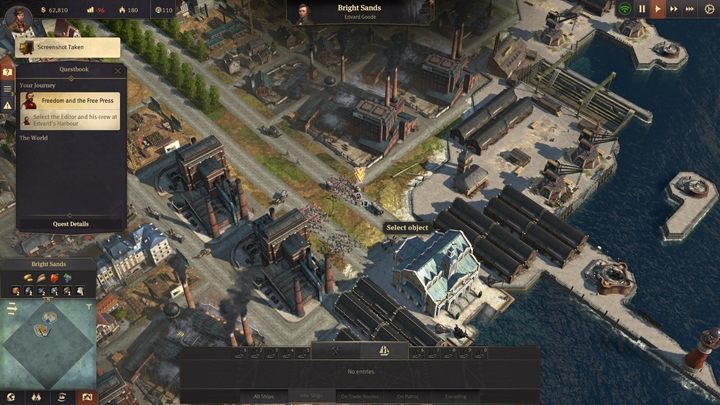 Your task is to press on the journalist and his crew in the city and then on the ship to escape to your island. 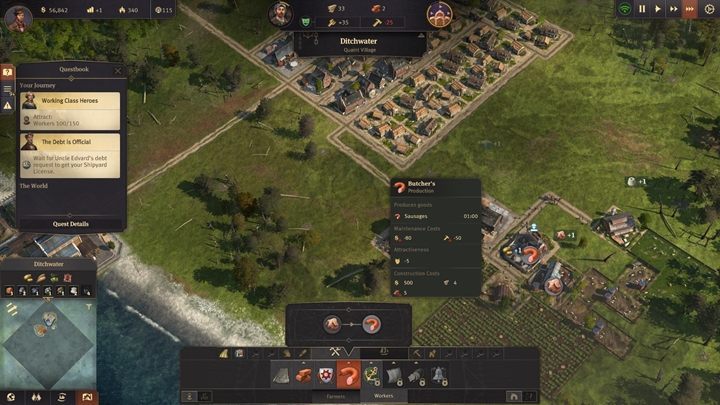 It's time to expand our society - you've met all the needs of farmers, so you can click on the huts and get workers. The new social class unlocks new buildings, but be careful, because you still have to support the right number of farmers who will be working in the previous buildings. Your task is to attract 150 workers. It's worth building Pig Farm and Butcher's to start producing sausages, which will further increase the number of new inhabitants. It is also necessary to build Clay Pit and Brick Factory in order to be able to build bricks, the raw material for new buildings. 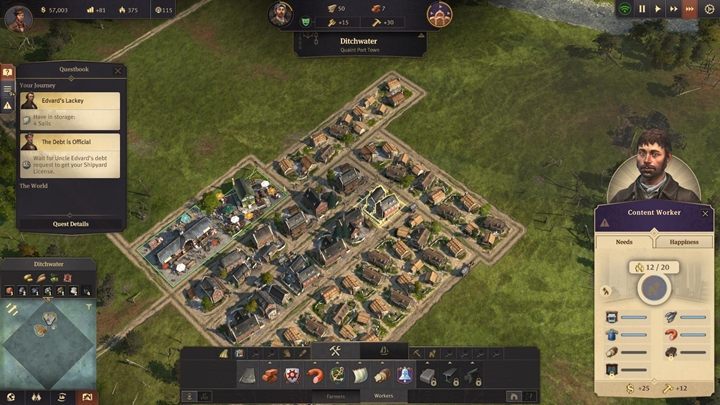 Your task is to win 4 sails, for the next tribute to Edward. Build Sheep Farm and Sailmakers to start production. If you're short of inhabitants, just increase the number of farmers and then turn them into workers. 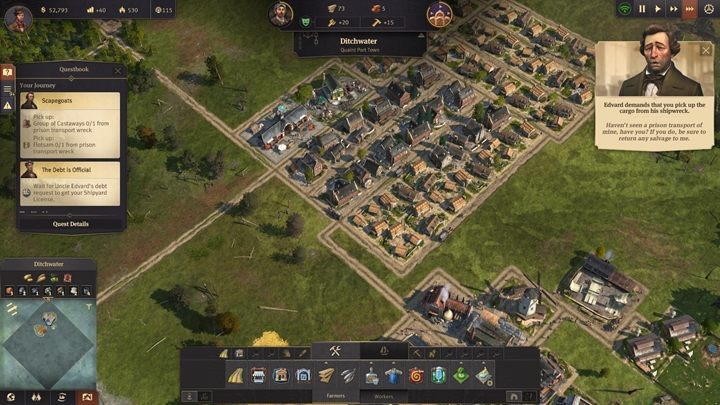 In this task, you must select your ship and then send it to the desired location. You must save a group of survivors and pick up the drifting cargo. When you complete this task, you will receive a new objective from Edward.

None of Your Business/Curiosity Killed the Cat 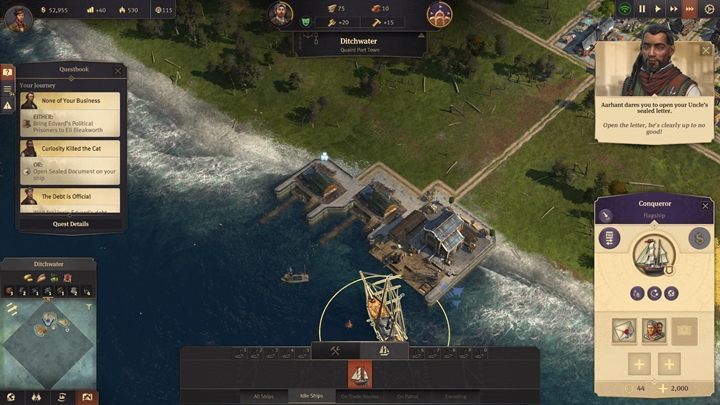 There is a choice to make. You can take the rescued political prisoner to prison, to Eli Bleakworth, or open the obtained letter and transport the prisoner to the royal governor. Whatever your choice, you will pay off your uncle's debt and complete The Debt is Official mission. 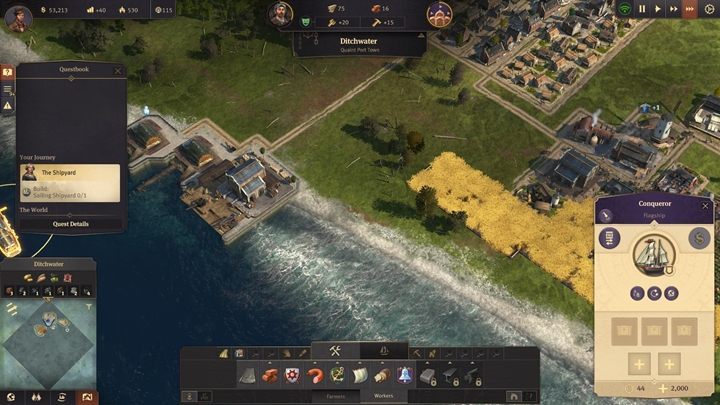 Your task is to build a Shipyard, which will finally allow you to operate on the sea, trade with others, and so on. Build a recommended building and you'll complete this task.

Hot of the Press 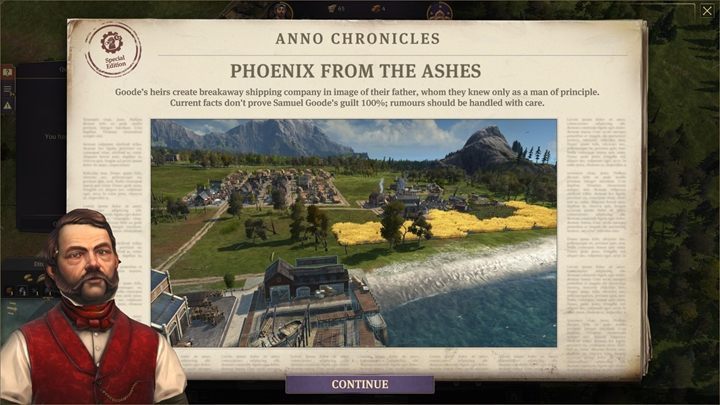 The last task requires you to take a photo of your colony, which will be published in a newspaper. Do this and you'll complete the first chapter of Anno 1800. This way you take your first steps towards an industrial empire.