In this page of the guide you will learn everything about the currencies available in Animal Crossing: New Horizons.

Let's start with the fact that there are two kinds of currencies in the game. 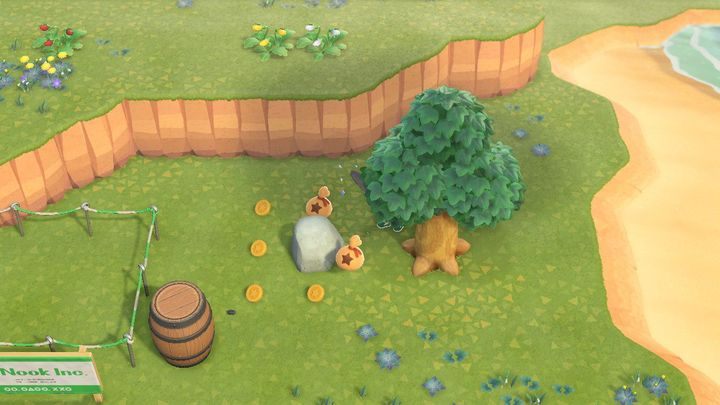 Sometimes you can get even a few thousand of bells from a single rock.

The first of the currencies is the classic Bells. You can obtain them in the Nooks Cranny shop for selling various goods: fish, insects, resources, fossils etc.

Bells can be spent in shops on new furniture, clothes, seeds, tools, and many other useful items.

Bells can be also used for paying for improving the island. Over time, you will be able to buy infrastructure improvements from Tom Nook. This includes bridges and stairs to the upper parts of the island.

Expanding the house requires some bells fee as well. Each time when Tom Nook will expand an interior or add a room in your house, you will receive a bill. You must pay it so that you can continue investing in your house.

Nook Miles is the second currency available in the game. You can read more about it on this page of the guide. The most important thing is that you can easily farm Bells - simply focus on specific tasks. Nook Miles are obtained in a much slower pace.

Early in the game, you will receive plenty of Nook Miles because they serve the role of achievements and you get them for almost every activity. Later however, you will receive them less frequent. You shouldn't spend all of them at once. It is a good idea to save some for important equipment upgrades (otherwise, you might go insane from having to run to the shop every five minutes), path upgrades, and cliff and rivers manipulation upgrades.

Nook Miles are also very useful during the first week of the game, while you lack resources. You can use them to buy Nook Miles Ticket and fly to an island where you can mine iron, cut trees, or obtain new types of fruit trees. During these trips, you will also encounter new characters. You can invite them to your island if you have enough place for them. One such ticket costs 2000 Nook Miles, so remember to gather everything you can from such random generated island. You won't be able to come back to it later.