This page of the guide to Amnesia Rebirth contains a walkthrough of the chapter called The Laboratory . Our walkthrough explains e.g. how make the important decision related to possibly torturing the person inside the cage, how to obtain the pyramid, how to avoid the ghost, how to activate the torture machine and how to unlock the wagon that goes to the factory.

You can find 20 secrets in The Laboratory:

Important choice in the Laboratory - warning 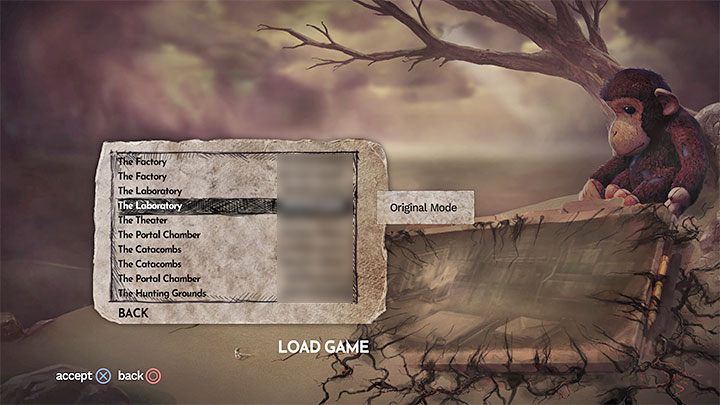 The Laboratory is quite unique, because you have to make an important choice to either make the main character engage in torture or not. We have described both variants later in the walkthrough - they are very different from each other.

Importantly, each variant has a separate achievement that you'll get at the end of the chapter - Torturer or Altruist . You cannot get both of them during a single playthrough, but you can replay the chapter once you've completed it and get botch achievements that way. We recommend that you first choose the variant that you want less, and after getting the achievement, load the save file to choose the one that you will stay with until the end of the game.

Initial exploration of the laboratory and getting the pyramid 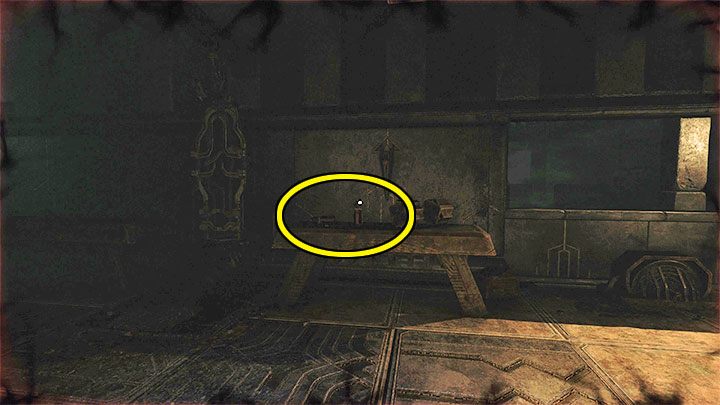 After the chapter starts, ignore the wagons (you will use one of them at the end of the level) and use the stairs that lead to the first of several rooms in the laboratory.

On the table shown in the picture, there are the first two collectibles - Cylinder: Sacrifice and Cylinder: Pavlos . Additionally, you can find large cubes in the same room and move them to reveal the matches. 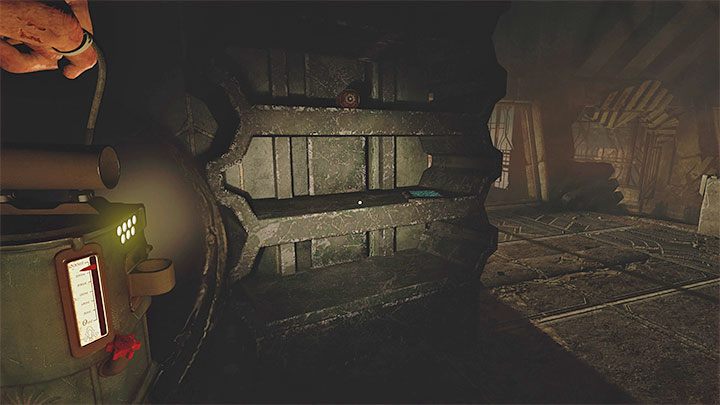 Open the door to the next room. It is a torture chamber which plays a very important role later in the stage. You will talk to the blue creature here.

Open another door. On the left shelves shown in the picture above, you can find 2 secrets - Cylinder: Grass and The Laboratory: Note on Shuttles. 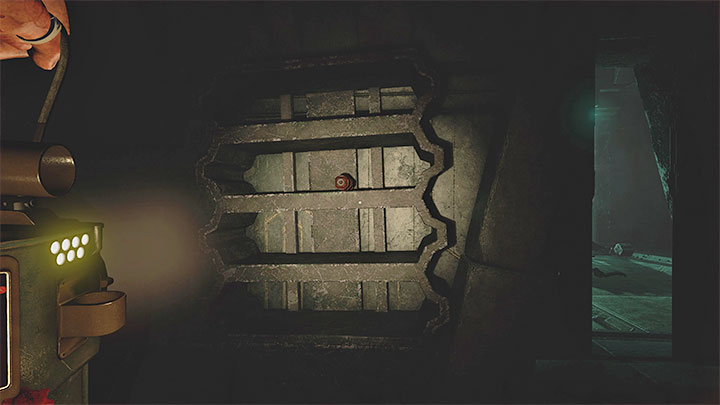 Keep exploring the same room with a large hologram console (you will use it at the end of the stage to turn on the shuttles).

You can find matches in one of the boxes on the ground and the Cylinder: Warmth secret on another shelf shown in the picture above. 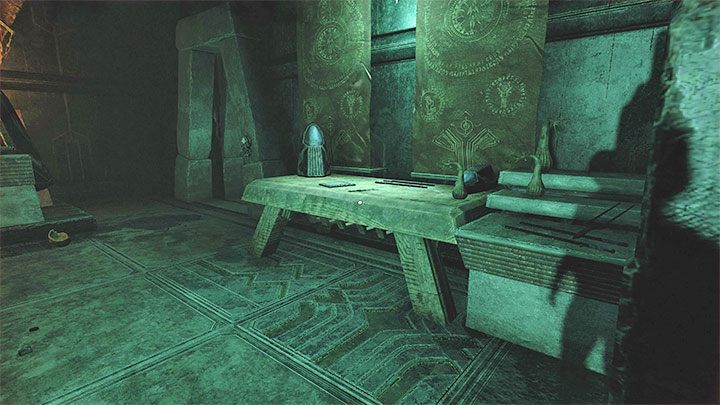 Go into the next room. Check the shelves with large cubes - pick them up one by one until you find matches hidden by one of them.

On the large table visible in the picture is a collectible - The Laboratory: Note on Vitae Flow . 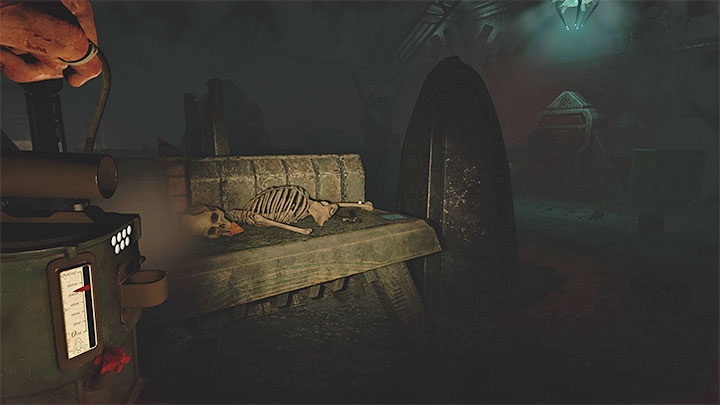 Next in line is the large unlit room with a capsule in it. Near the capsule, there is a table on which you will find the collectible shown in the picture - The Laboratory: Note on Memory Process . 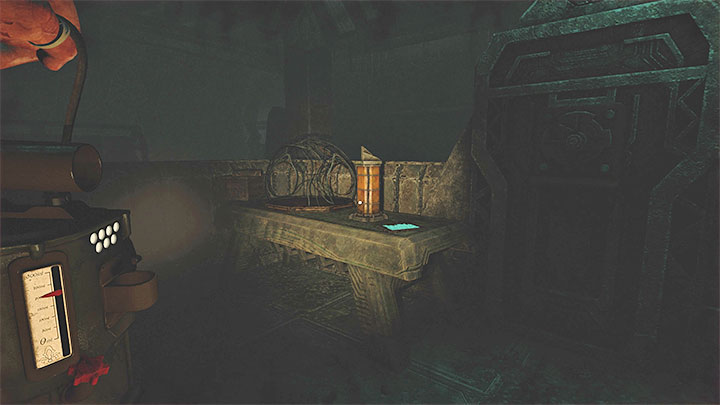 In another part of the room you will find an illuminated statue head with matches underneath it, and a table shown in the picture above. On the table, apart from the skeleton, you can find more matches and a secret - The Laboratory: Note on Memory Process (it has a different content despite the identical name to the previous document). 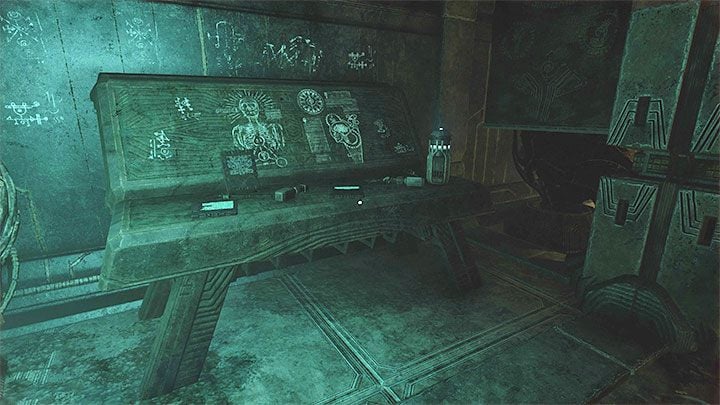 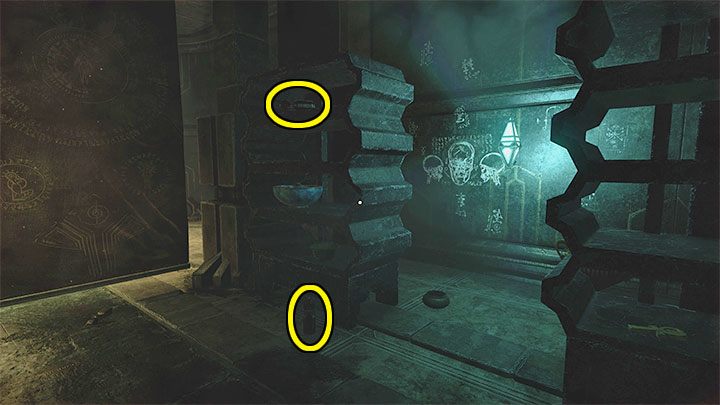 Go to the yet unexamined exit from the room. There are many collectibles in this area: 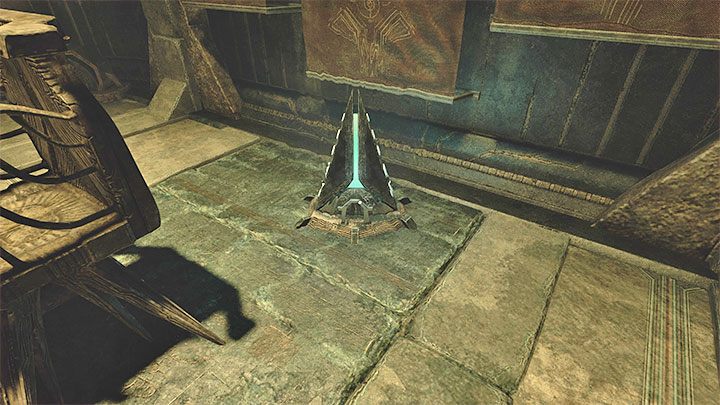 Behind the large curtain is the last room of the laboratory with the pyramid you're looking for, which you will use later in the stage to power 1 or 2 devices.

Before you take the pyramid, pick up the yellow object from the table to reveal the matches hidden under it.

Moving the pyramid and avoiding the ghost 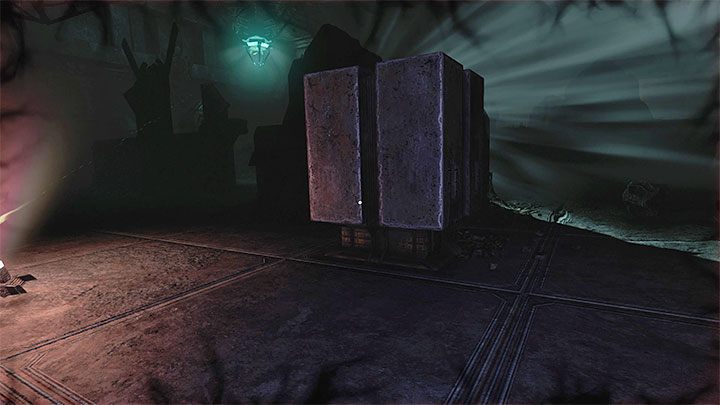 You have to carry the pyramid towards the rooms that you visited at the beginning of the chapter. Unfortunately, a ghost will appear in the large, dark room and start patrolling the area.

The the ghost will "light up" the area, and you need to stay in the shadow and use the nearby objects as covers. 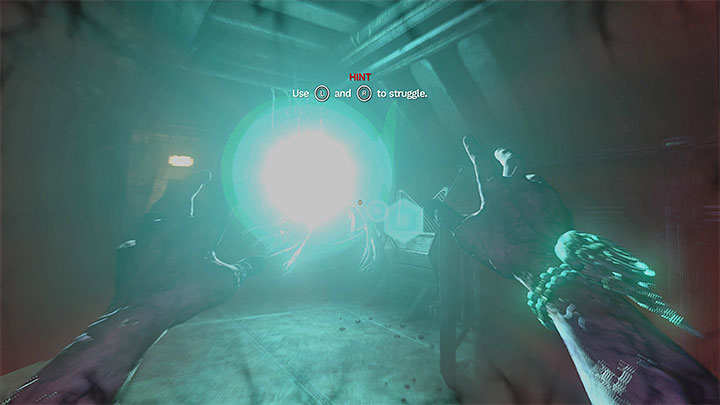 Avoid looking at the ghost for longer periods, as it can increase the heroine's fear level, and also try no to run, because the monster can also react to sounds and quickly catch up with Tasi. If the ghost catches you, you can try to get out by moving the analog sticks in the familiar way. Tasi's possible death will remove the ghost from the room when you respawn.

You have to reach the exit, and if you don't remember where it is, put the pyramid down for a moment and explore the area.

There's an important choice ahead of you - it concerns Amari and her unborn child. Previously, you learned about Amari's health issue, and you can decide whether you want to cure her (and at what cost). 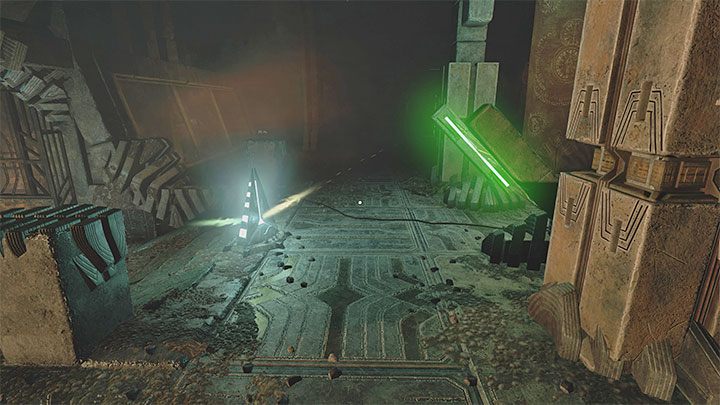 The first variant is much simpler. You need to leave the laboratory as soon as possible, without curing Amari and torturing the innocent person.

Take the pyramid to the room with the large holographic console. Put the pyramid on the ground to supply power to this room. 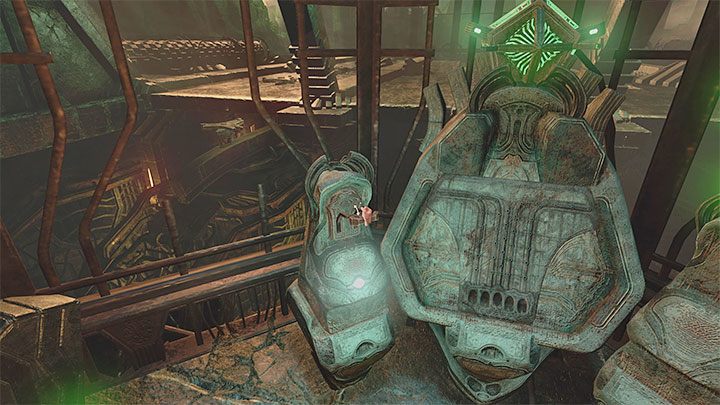 Reach the lever shown in the picture. Pulling it activates the shuttle visible below. 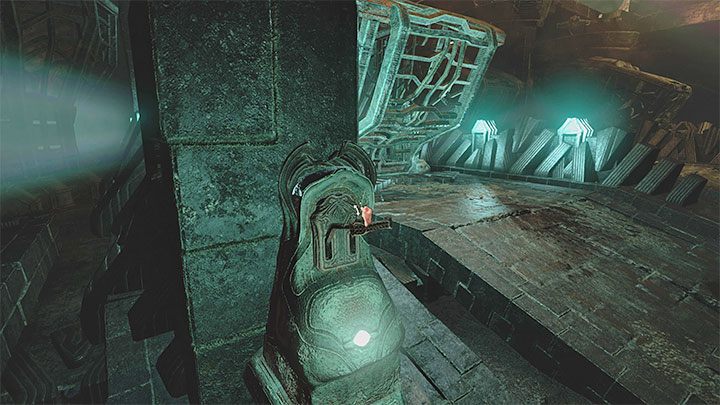 Now go back to where you started this chapter - to the stairs that lead to the lower level. After reaching the shuttle room, use another lever to get inside and start the ride to the next location, The Factory.

If you didn't torture the person and thus didn't cure Amari, you should unlock the Altruist trophy at the end of the stage. 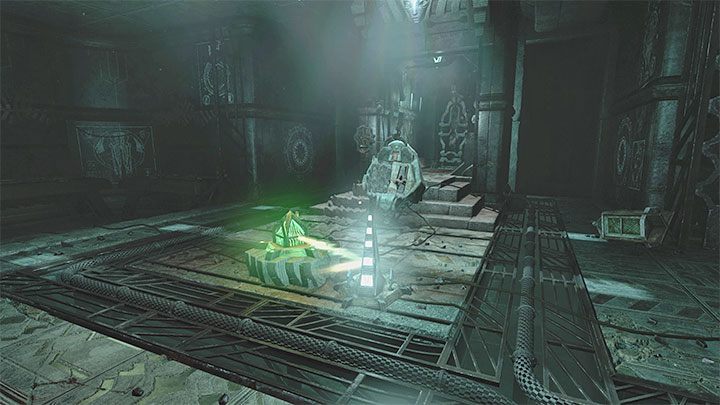 The second option is much more complicated. You need to use a machine in the laboratory to cure Amari, but to do so, you need to torture an innocent person to use their "life force" to heal the fetus. 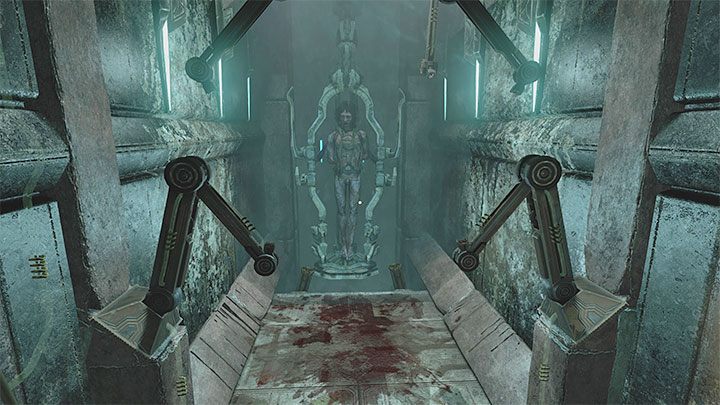 Placing the pyramid on the ground will supply power to this room. A cage with a person who will soon be tortured will arrive there. You can try to communicate with the prisoner by knocking on the glass, but this won't do anything. 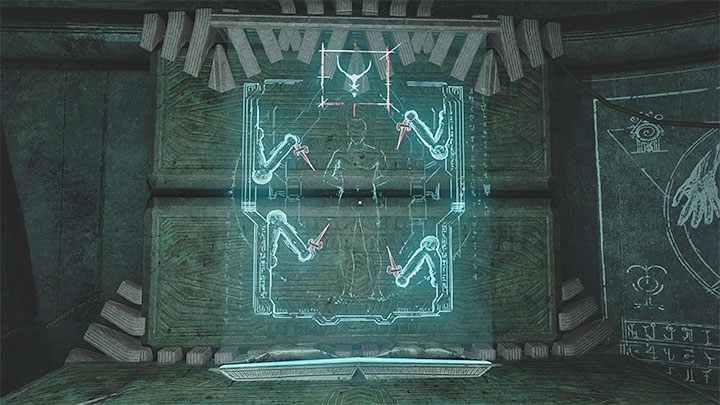 The torture puzzle can be solved in 3 ways, and you can find some hints on the 3 diagrams in the room. Regardless of what method you choose, the end result will be the same.

The first diagram is marked with a horn icon. Each diagram shows red objects that symbolize the objects you should use for torture and where to place them on the device. 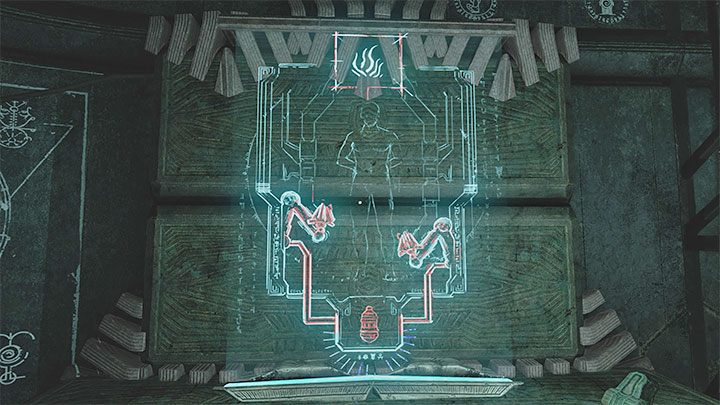 The second diagram is marked with the flames icon. 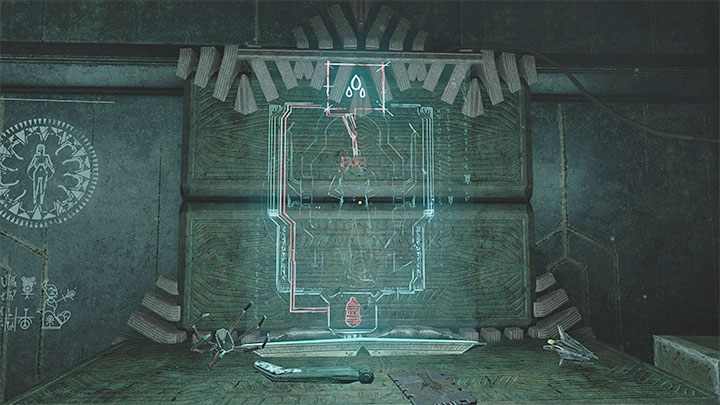 The third diagram is marked with a drop icon. We will use it further in the walkthrough, because it is the simplest - it requires the least torture items. 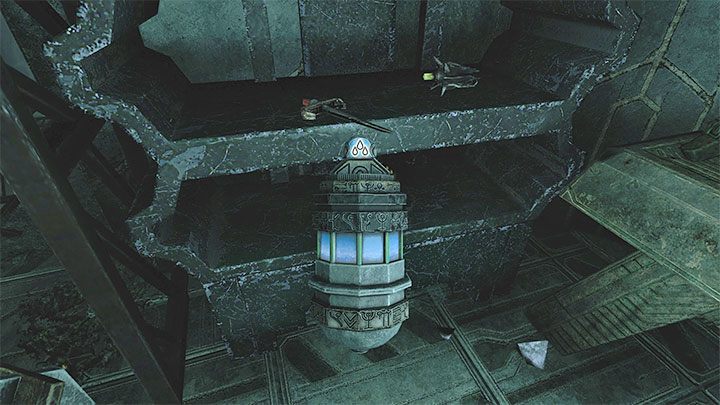 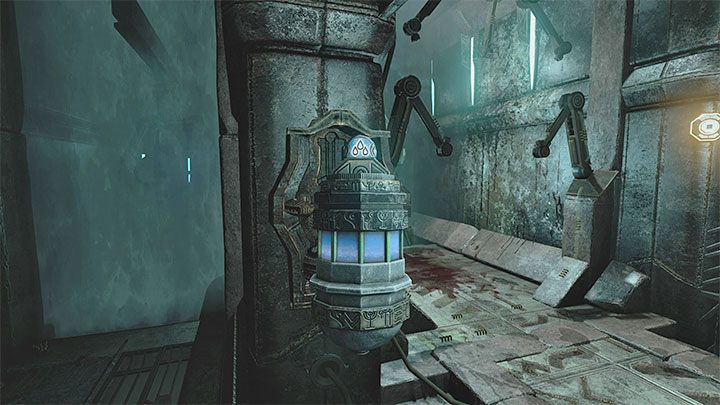 All the ingredients you need to start the torture can be found in this room - they will be on the shelves and tables.

For the purposes of the drop diagram, you need to find a blue container with the same icon on one of the shelves (picture 1). Take it to the slot in front of the cage (picture 2). 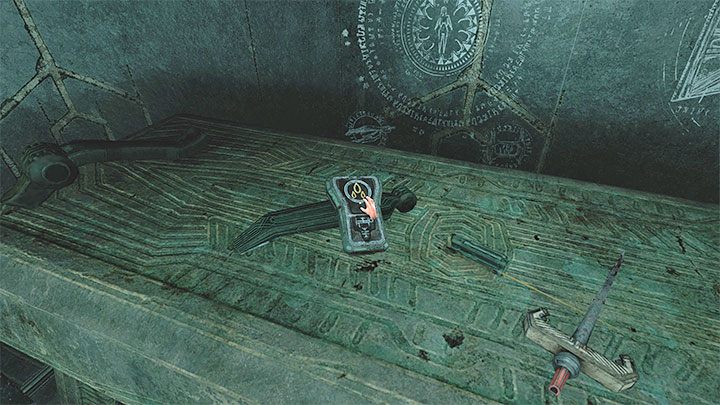 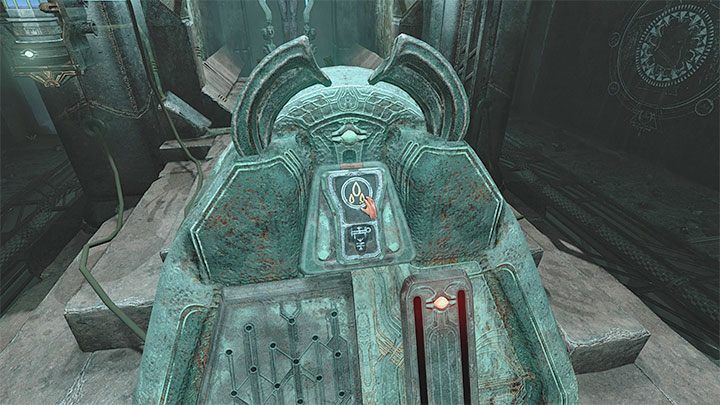 You also need to find the second item with the drop icon, shown in picture 1. Place this device in the main console (picture 2). 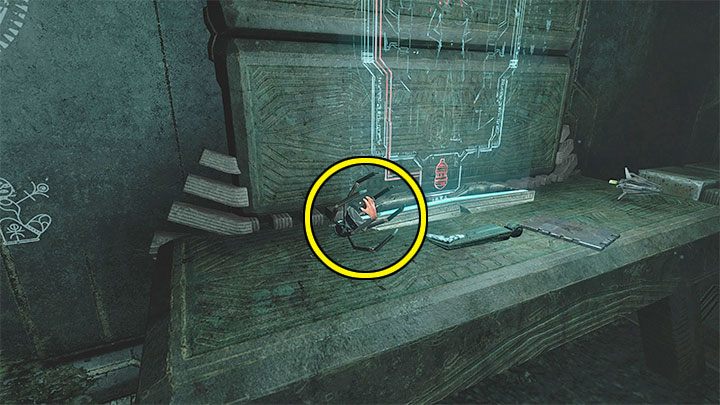 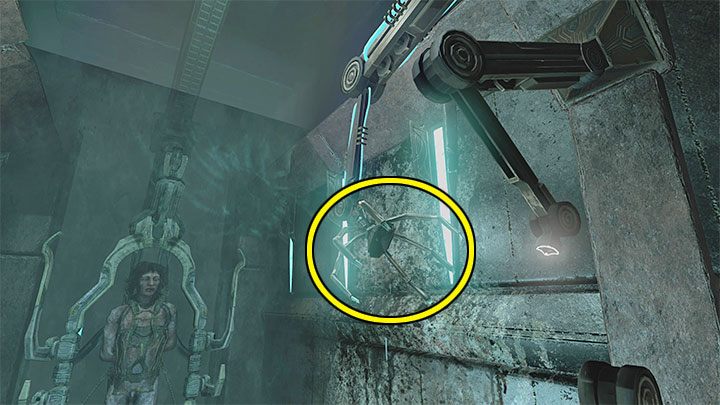 Finally, you have to find an item that looks like a spider - see picture 1.

Take the item to the mechanisms in front of the cage. You have to attach the object to the singular upper arm - we have marked it in picture 2. 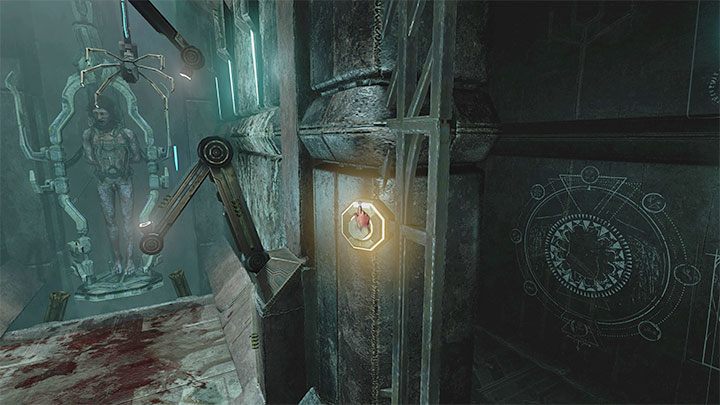 After installing all the components, press the button on the right, which will prepare the prisoner for torture. 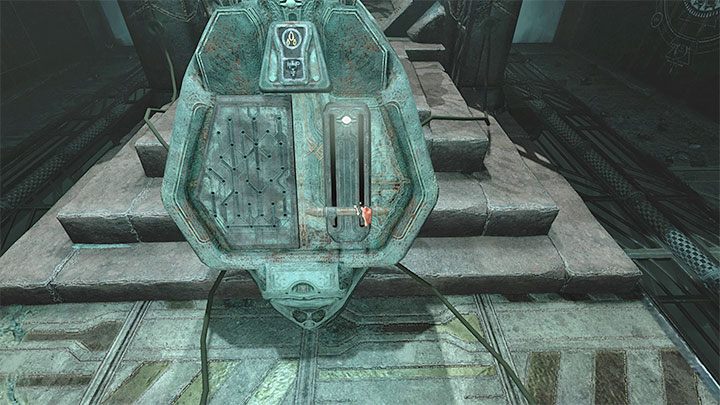 Go back to the console and pull its right lever . Keep holding the lever until the torture is over, i.e. all the lights to the left of the lever turn blue. 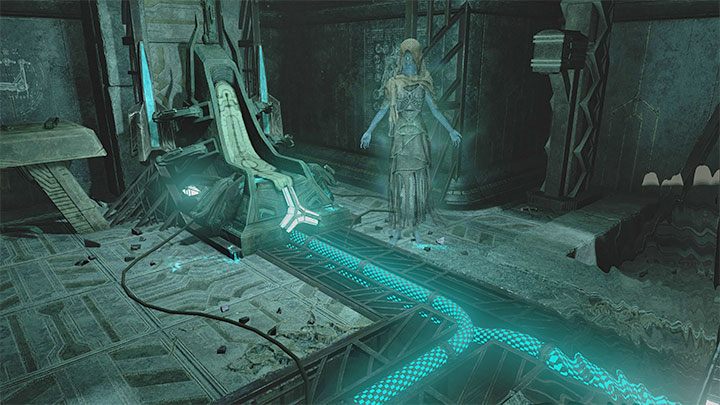 The tortured person will be killed and the life force will be sucked out of them. Notice that a new blue connection has appeared on the ground that leads to the chair . Sit in the chair to undergo a procedure. It is not interactive.

Finally, you have to repeat all the steps from option 1, i.e. move the pyramid to the hall with the hologram, activate the shuttle and get to it. The difference, of course, will be curing Amari. You'll also get the Torturer trophy at the end of the stage (instead of Altruist).