This page of the guide to Amnesia Rebirth contains a walkthrough of the chapter called The Hunting Grounds. Our walkthrough describes, among others, how to avoid hostile creatures, go through the maze, get the Leyden Jar and return with it to the Portal Chamber.

You can find 21 secrets in The Hunting Grounds:

Searching for the Leyden Jar 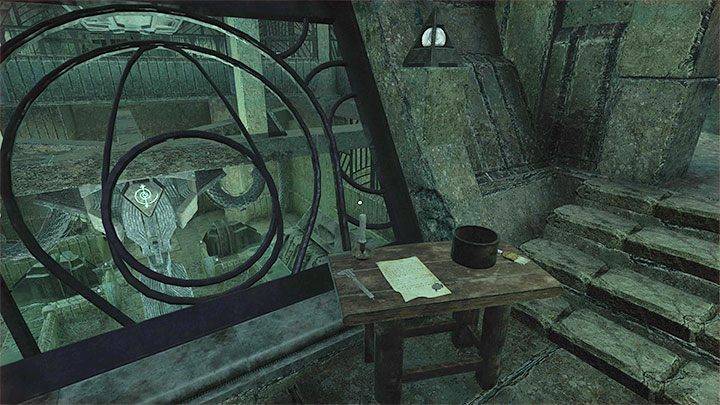 You will explore The Hunting Grounds after unlocking the passage during the second visit to Portal Chamber - we have described it on the previous page of the walkthrough.

You will find matches on a stool near the starting point. After going through the door, you will reach a shutter with a large device and a secret, The Hunting Grounds: Device Note, on a table in front of the shutter. 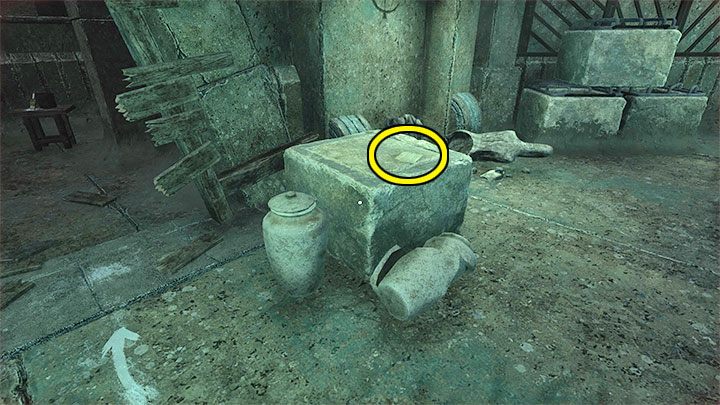 Go up the stairs to the left. On your way, you will pass a stone container and after removing its lid you can find matches under scrap.

Continue going the path. You will reach the stone block shown in the picture, which you will recognize by the arrow painted next to it. There is a collectible on the block - The Hunting Grounds: Vitae Note. 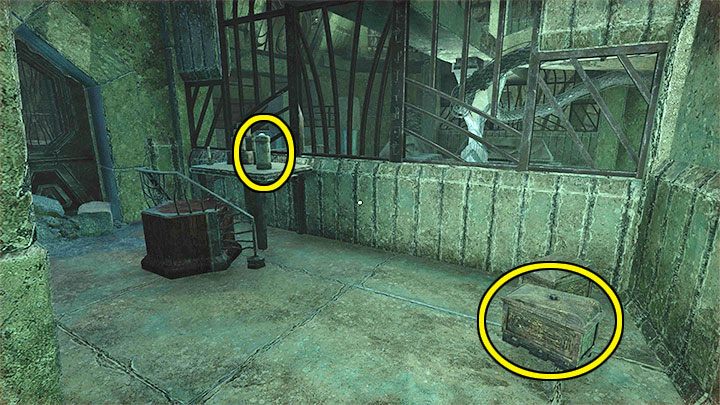 Continue to explore the curly path, thanks to which you will discover the stairs leading down. After reaching the room shown in the picture, you can: 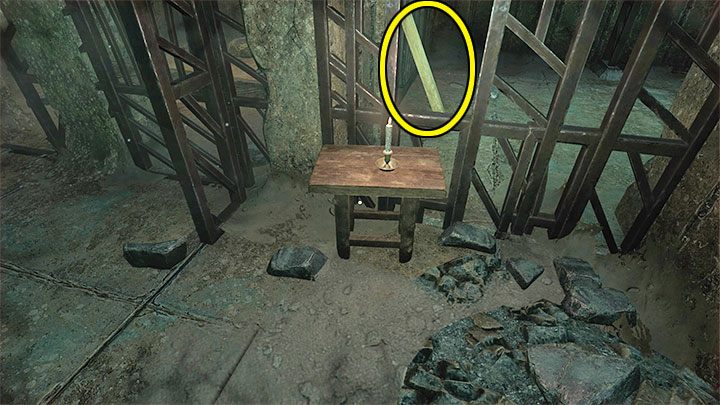 Now go back upstairs and to the dark passage with a white arrow painted in front of it. Approach the closed door and go right. You will find matches here, and you have to solve a mini-puzzle - you need to throw stones through the gap in the bars at the support marked in the picture (to do that, press the throw button). Keep throwing at it until the plank is broken and the passage is unlocked. 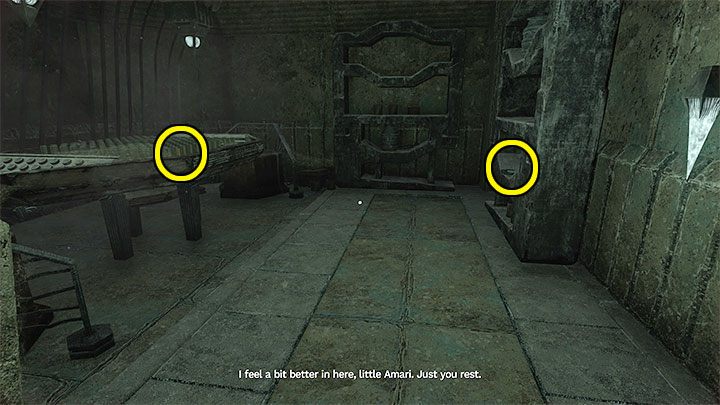 After crossing the passage, you will find the corpse of one of your companions, and a flashback will trigger. Go forward and open the door leading to the room shown in the picture. There are 2 secrets here: 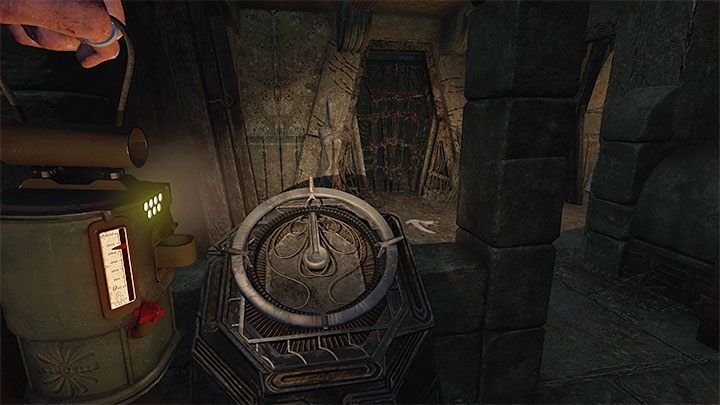 You can now leave the room and go down the stairs. Take off the stone lid from one of the containers to reveal the matches.

Eventually, you will reach the wheel shown in the picture above. Using it unlocks the entrance to the maze, and going through it is a kind of puzzle.

Going through the maze 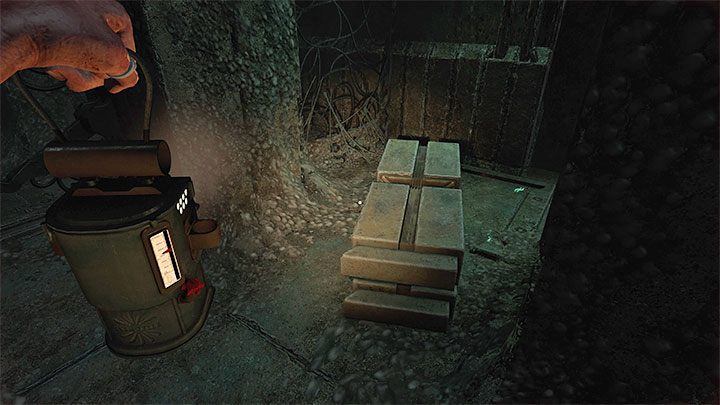 The main difficulty going through the maze is that some paths will block after the heroine approaches them.

At the beginning of the maze, turn right twice. You will reach the pressure plate shown in the picture, from which you have to remove the load by pulling it towards you or pushing it to the left. 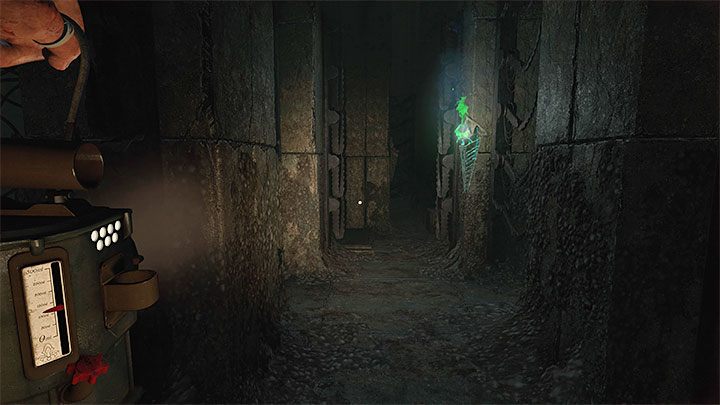 A passage will unlock on the left side. You have to turn left twice and go towards the torch visible in the distance. 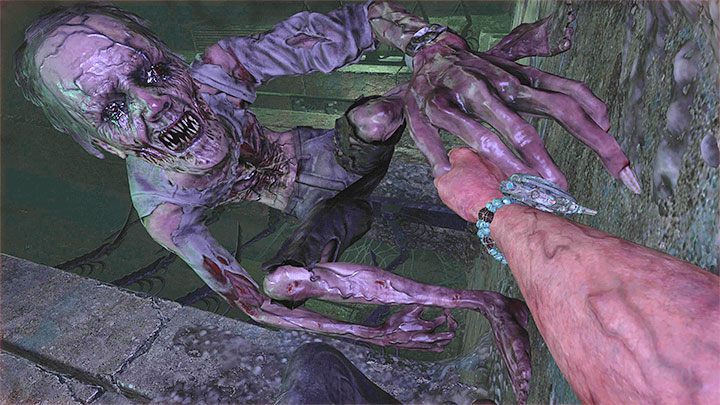 The passage next to the torch will suddenly block in front of the heroine. Turn 180 degrees and take a few steps forward. Let the monster that is mutated Leon get closer. You have to watch the cutscene of the confrontation with the monster to advance to the second phase of crossing the maze.

From now on, Leon will be hunting the heroine in the maze. He does not attack Tasi all the time, but approaching or running near him may alert him. In such situations, run away and lie down on the ground until he gives up. 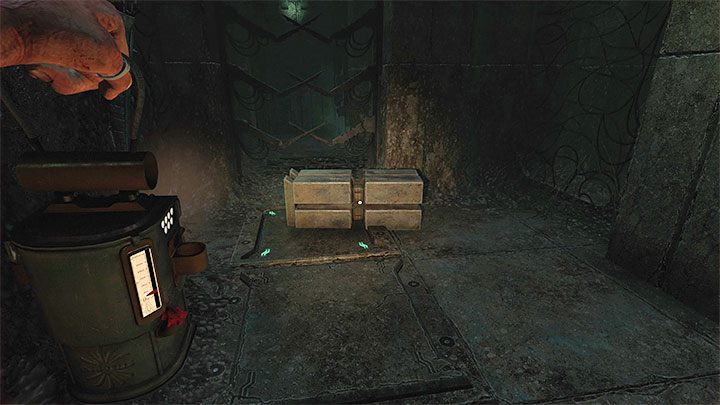 Here are the next directions in the maze: 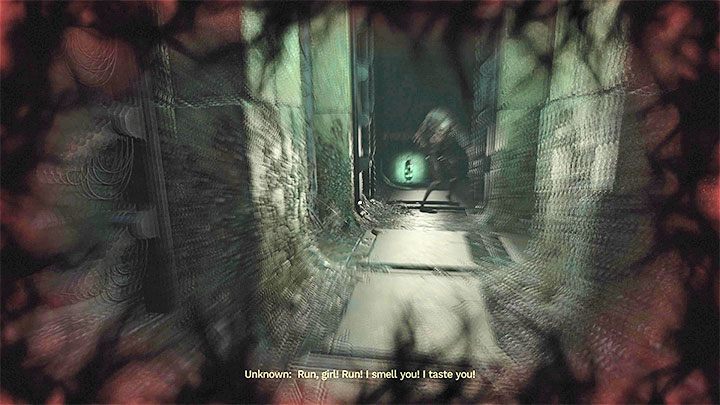 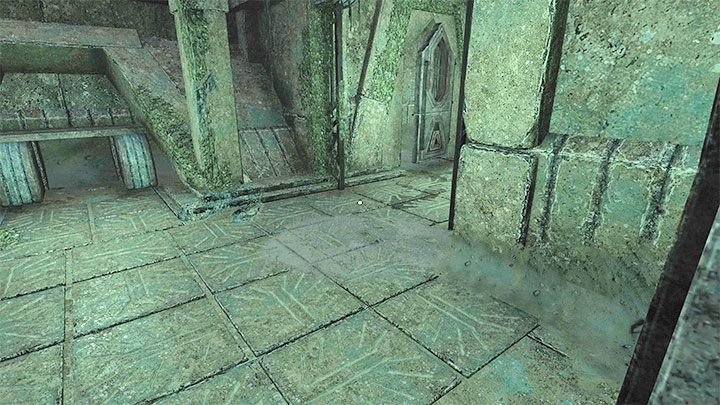 While crossing the maze, you may notice matches lying on the floor, but you have to approach them closely to collect them. Picking them up is, of course, entirely optional: 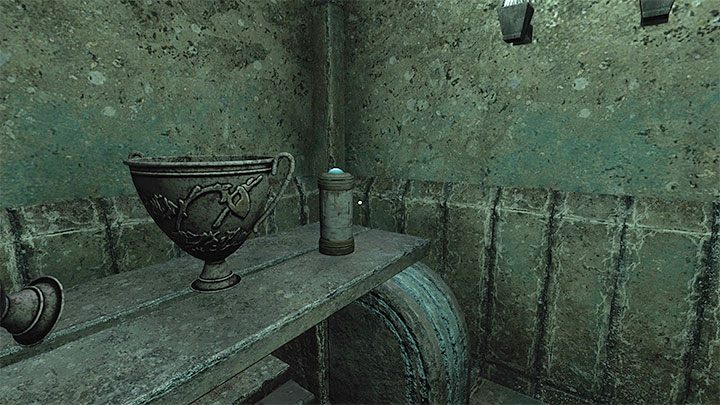 Go to the room adjacent to the exit from the maze. There is a new wheel - use it to unlock the next passage. You will watch another flashback.

You will reach a room with matches in a stone container and a collectible on the table - Cylinder: No Word. 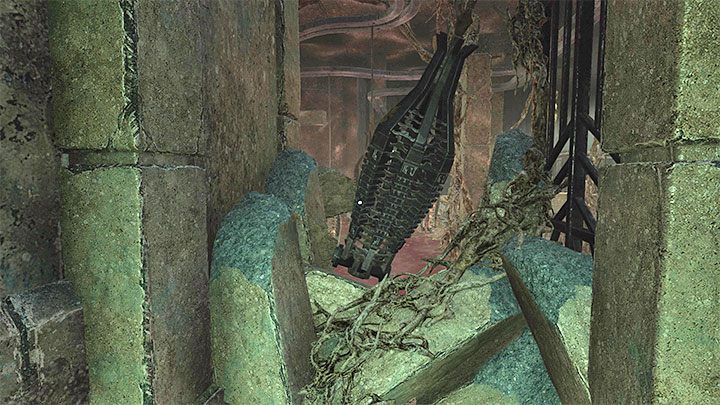 Use another wheel and keep going. First, examine the left path. There you can find matches next to the hanging objects,

Squeeze through next to the hanging object on the right, or push it (press a separate button) to land in the tank with red goo. 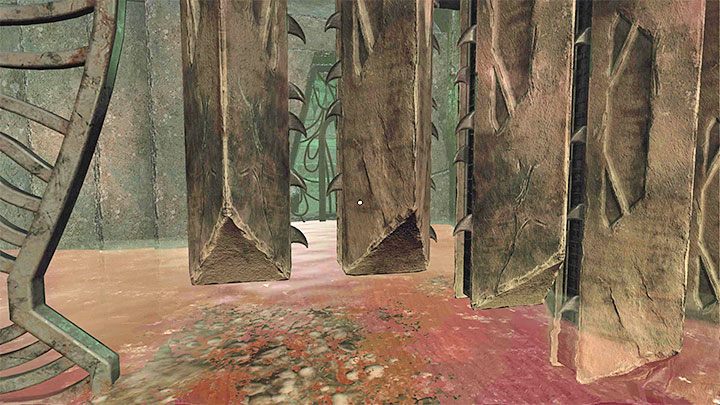 Turn left immediately to slide under the partially raised gate (picture above). 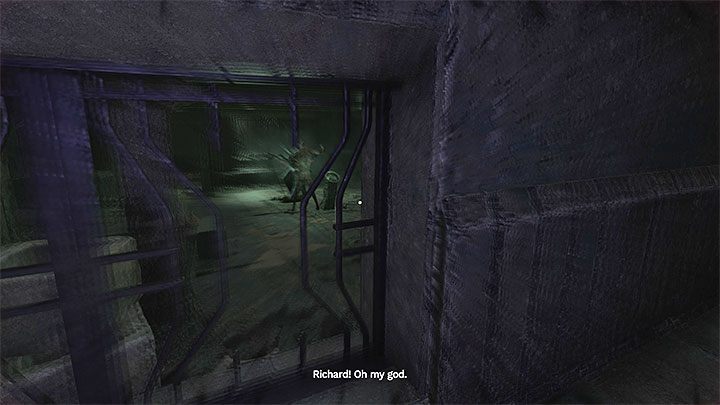 Soon you will reach a room with a large device. There is nothing you can do here yet, but remember this place because you will come back heare a little later.

You will reach the room where Richard is being tortured by the monster . 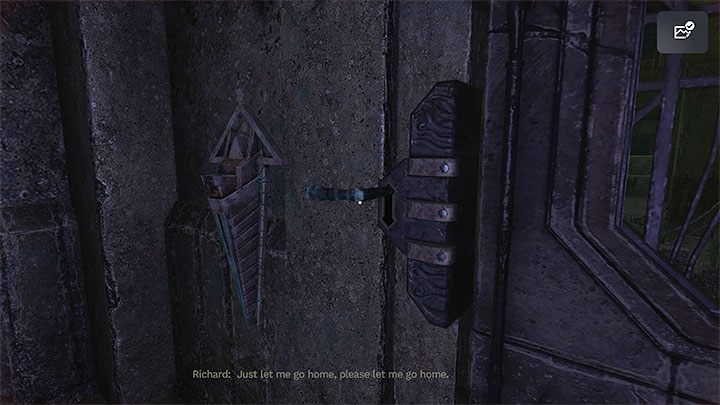 Start sneaking up to avoid being detected by the monster. Use the corridors to reach the closed door and use its mechanism to open it. Right after you enter the room with Richard, you will find matches . 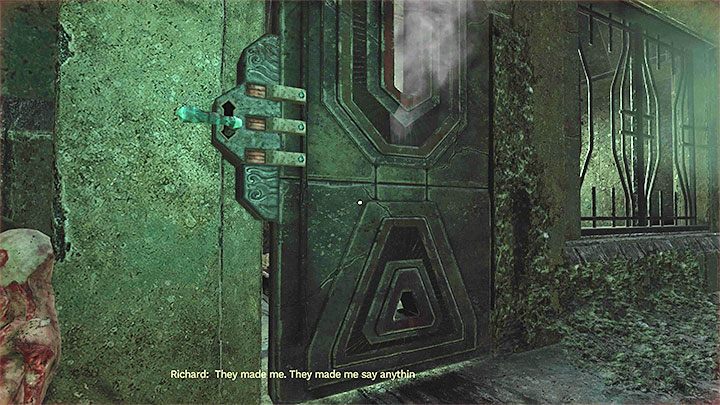 Now you have to trap the monster from the left room . Approach it carefully, close the door and quickly use the mechanism known from earlier to block the lock. 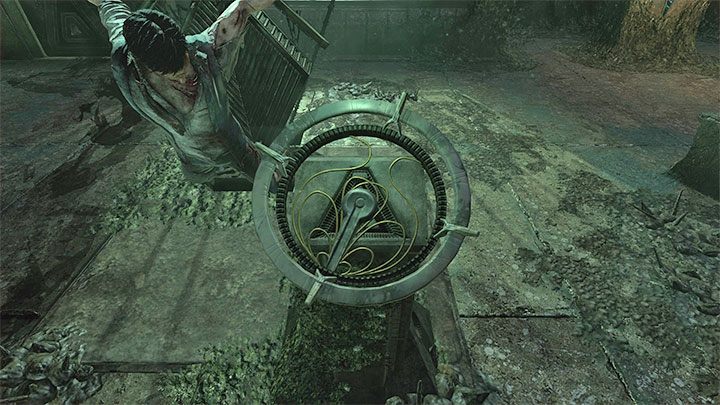 Before you free Richard, you can take a look around:

After exploring the area, approach the rotating mechanism in front of Richard and use it. After turning it enough times, Richards falls on the ground, and a cutscene starts. You don't have to do any additional activities here - the way the final "confrontation" with Richard goes is imposed by the game.

Obtaining the Leyden Jar and returning to the Portal Chamber 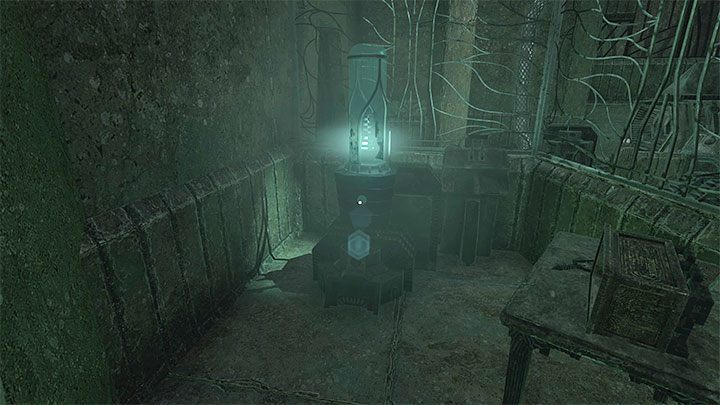 After regaining control over the main character, you will find yourself back in the room with the big device. Reach the place with the glowing container. Get the matches and the "full" Leyden Jar . 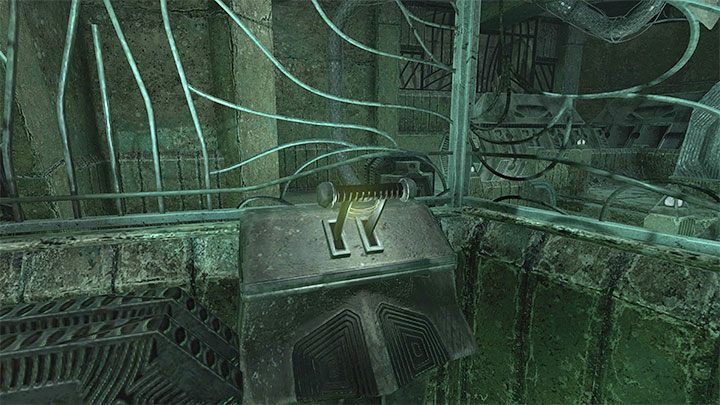 Stay there and pull the lever . It will unblock the passage on the other side of the bars. Go there (you can optionally find Richard on the path on the right). 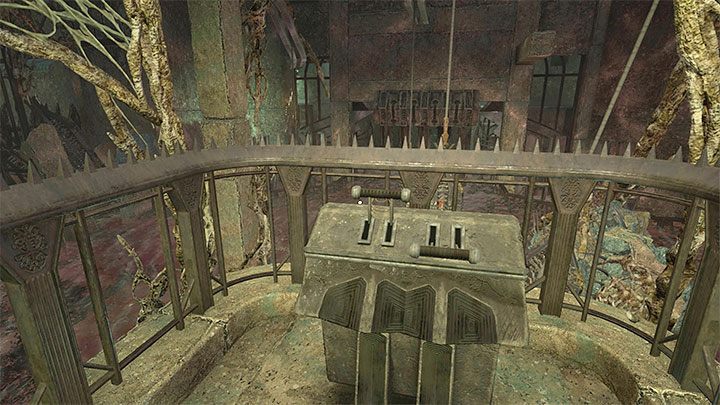 You will return to the room with the red goo, but this time the nearby machines will be turned on and act as traps preventing you from going further. Reach the higher balcony and use the lever. 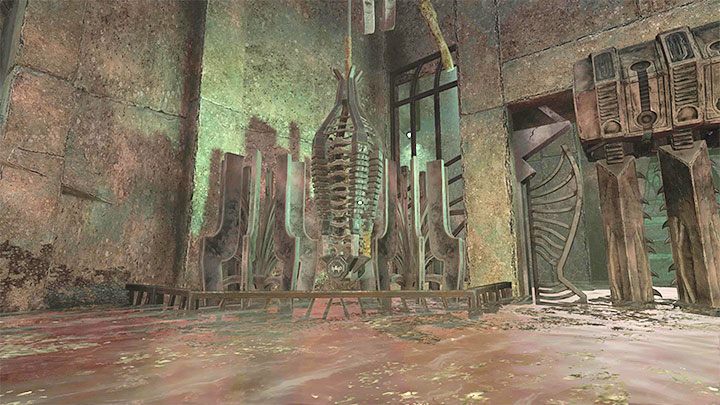 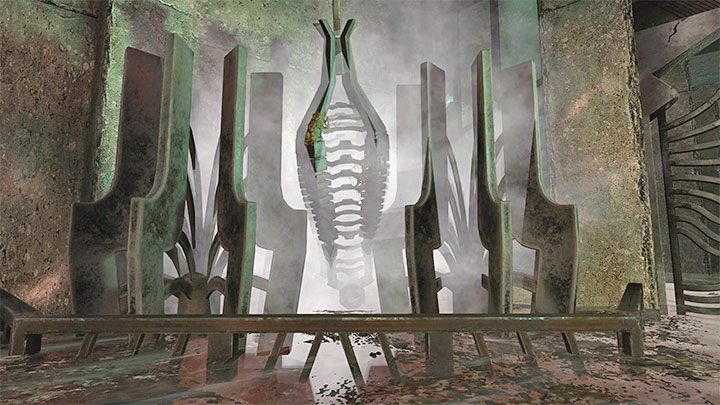 Return to the tank and approach the hanging object from picture 1.

You have to push the object towards the working machine on the left. Picture 2 shows the desired effect - it will prevent the objects on the right from moving, allowing you to get out of the room. Leon will appear for the last time, but he is no longer a threat to the heroine and Tasi will be able to free herself. 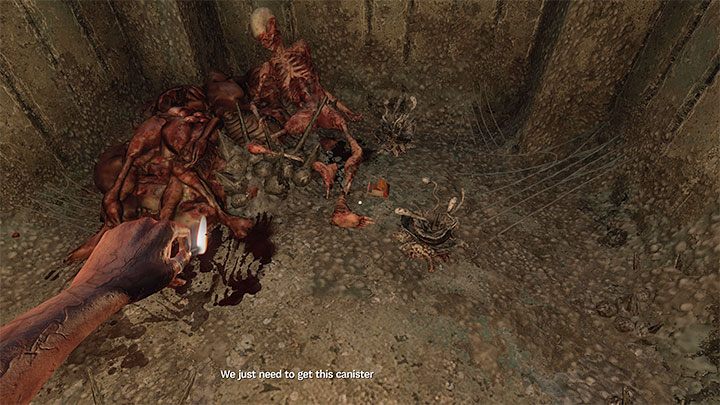 You will get to a long tunnel filled with red goo, and you have to follow it. A new flashback will trigger along the way. Crouch after reaching the narrower tunnels.

Continue until you reach a corpse with matches next to it. 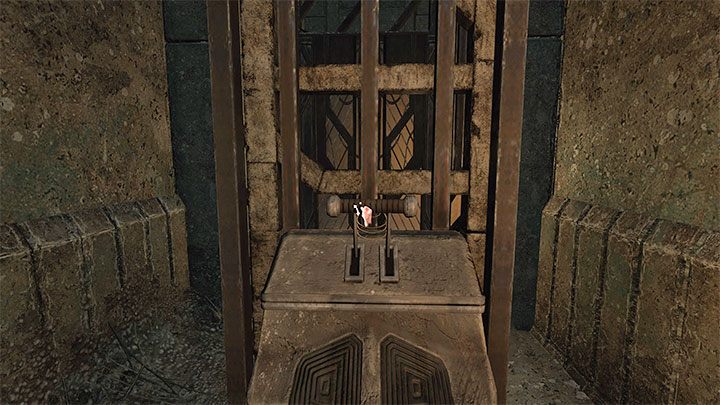 Pull the lever to unlock access to the ladder. After reaching the top, check the new containers for more matches and use the second ladder. 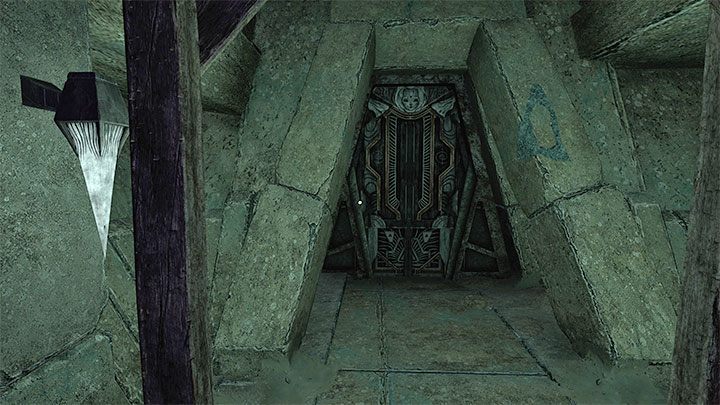 Unlock the door to return to the previously visited rooms. You have to go back to the door that leads back to The Portal Chamber.