This page of the Amnesia Rebirth guide provides a walkthrough of The Cistern chapter. The following walkthrough explains how to avoid confrontation with ghouls while getting through the sewers, how to solve the 3 valves puzzle and how to get to the surface.

In The Cistern stage you can find 22 secrets:

Getting out of the tank wreck 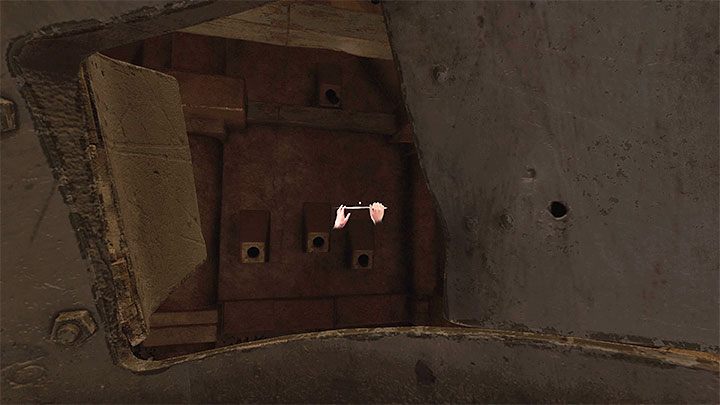 After an unsuccessful attempt to use the tank's turret, the machine will backfire and fall into the sewers. Your first task will be to leave the wreckage of the tank.

The hatch of the tank is blocked and you can't get out of the machine right away. First, you must again turn around the tank's turret. You need to get rid of the obstruction in the form of scrap metal behind the hatch.

Crossing the initial part of the sewers 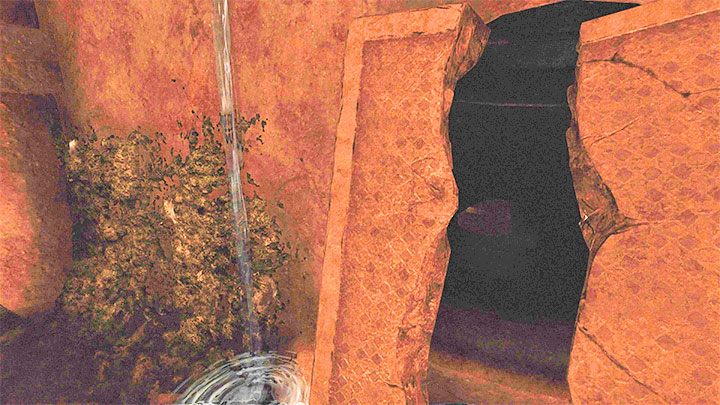 Once you get out, find a wheel. Use it to drain the water out of the room. In the area, there is also a chest with matches inside.

In order to leave the first room, you have to pull apart the broken wall fragments (in the spot shown in the picture above). 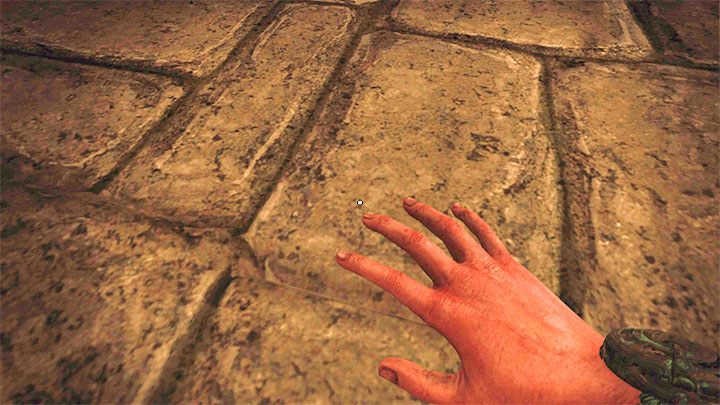 In the described stage, there are several confrontations with ghouls, during which the protagonist may die. If at some point you get surprised by a monster, you should start escaping. After you move away from the ghoul enough, stand somewhere behind the wall or furniture. Hold down the stealth mode button (left analog stick on the console) so that the protagonist kneels down and starts staring at the ground (as in the picture). The purpose is to wait for the ghoul to go away. Two things will signal that the ghoul went away - its footsteps will fade away and the music will change. Doing this correctly for the first time will earn you the Overlooked trophy.

Due to the high risk of Tasi's death, we recommend that you save your game regularly and/or make backup copies of your saves. 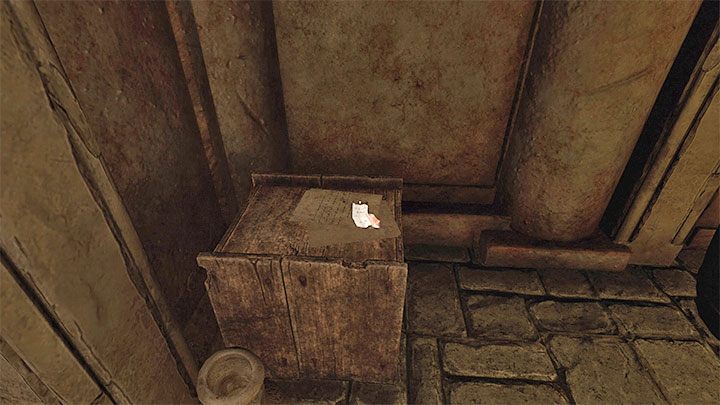 After squeezing through the tunnel, you will jump down to a new room. Check on the fetus as recommended.

Throughout this stage, rely on matches (light the torches and standing lamps) and the oil lamp. There are matches in one of the small baskets. A bit further on the left you will find the secret The Cistern: Survey Note and a map, which is not treated as a collectible. 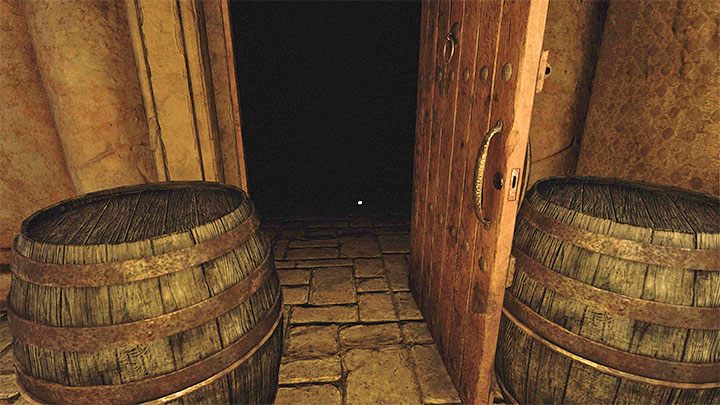 In order to continue the journey, you have to unlock the passage shown in the picture. This requires you to move the box and two large barrels (first remove the sandbag from one of the barrels). 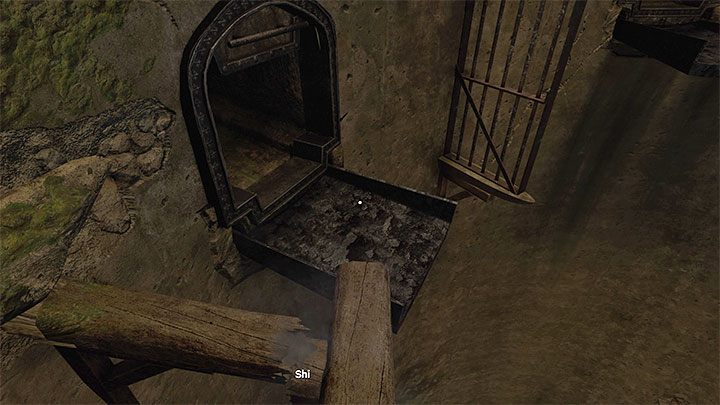 You will reach a round hall. There is a new wheel on the right side of the room. Use it to make the two platforms slide out. Approach them and jump down carefully to the first platform (picture above). Use the narrow tunnel to go further.

In the meantime, look for the shelves on the left side. There are matches on one of them. 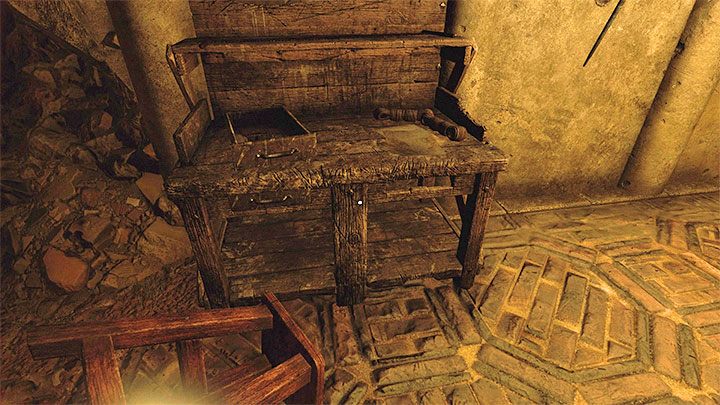 Go down the stairs and optionally examine the shelves on the right side - on one of the lower ones, behind the vases, there are more matches hidden.

It is recommended to light up the newly visited rooms so as not to miss any new collectibles. On the table shown in the picture above, there are 2 secrets lying next to each other - The Cistern: Conquest Note and The Cistern: Book Fragment. 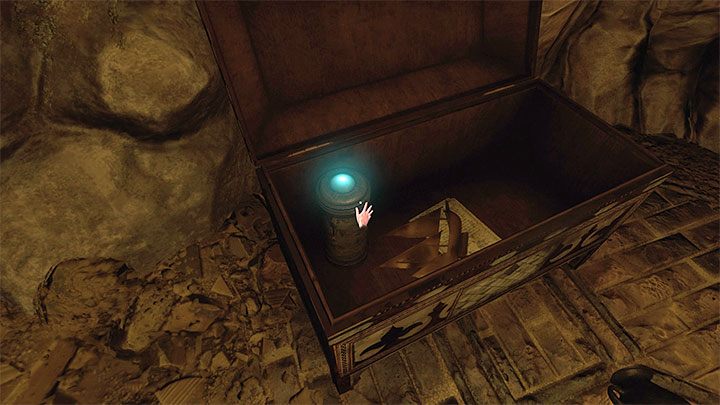 Another important object in this area is a large chest shown in the picture above. After opening it, you can get: 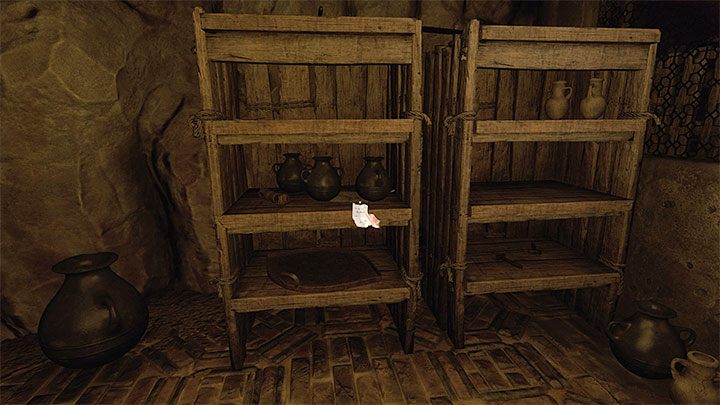 In the same area, you will also find shelves as shown in the picture. On one of them, you will find The Cistern: Pilgrim's Note collectible.

Finally, check the drawer of one of the tables without any collectibles. There will be matches inside. 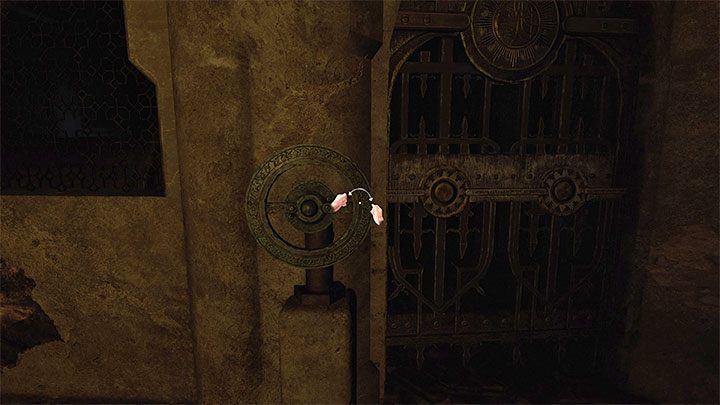 Use the only exit from the interconnected rooms, in which you found the previous collectibles. While traveling through dark corridors, check the drawer of the desk you pass by to find the matches.

Your goal now is to use the wheel shown in the picture to unlock the passage. This is where the first confrontation with the ghoul may take place. Remember about the previously described technique of kneeling down and hiding. 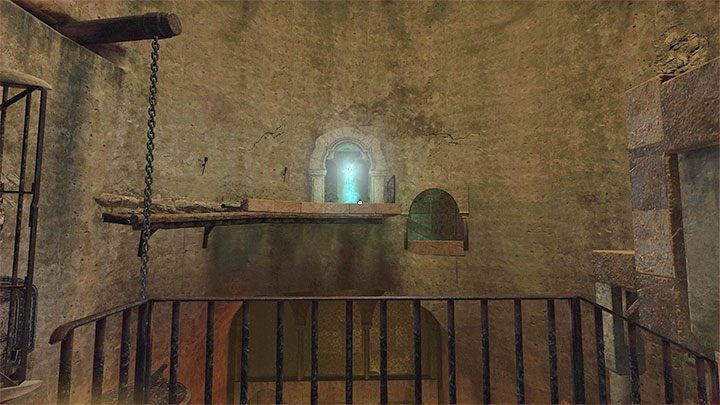 In the new area, you can find matches x2 - 1x in the drawer and 1x on the lower shelves of one of the pieces of furniture.

The linear route will lead you to the room with 3 valves, where you will have to solve a puzzle (picture above). First, jump onto the ledge on the left and look inside the chest to get matches. Use the stairs to return to the starting point. 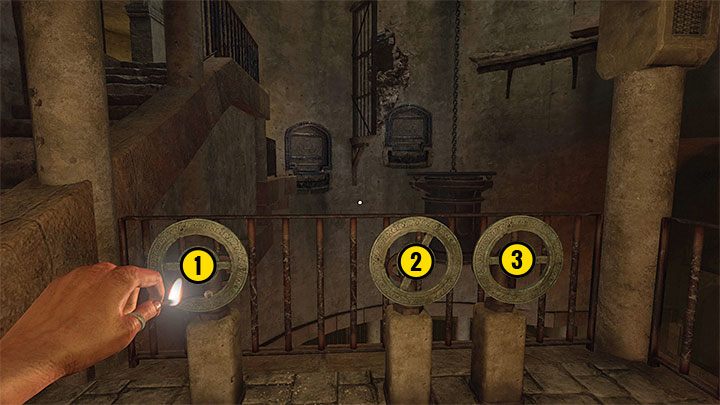 This time go right. Get the matches from the barrel and take an interest in three valves that are used to manipulate objects in the area. 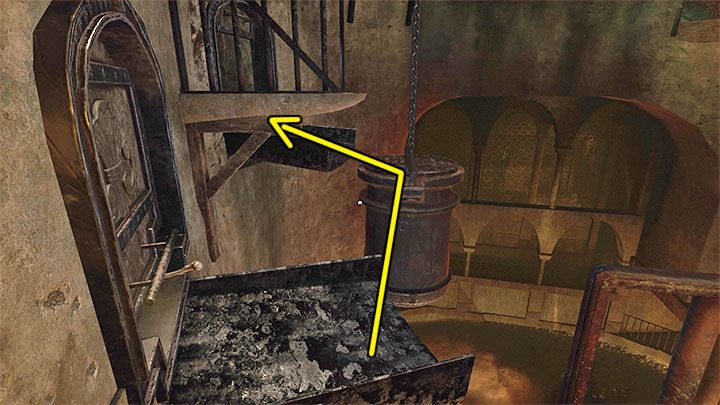 Use Valve 1 to pull the platforms forward and Valve 2 to place the hanging object between them. It is recommended to save the game because it's easy to get confused here and fall down. 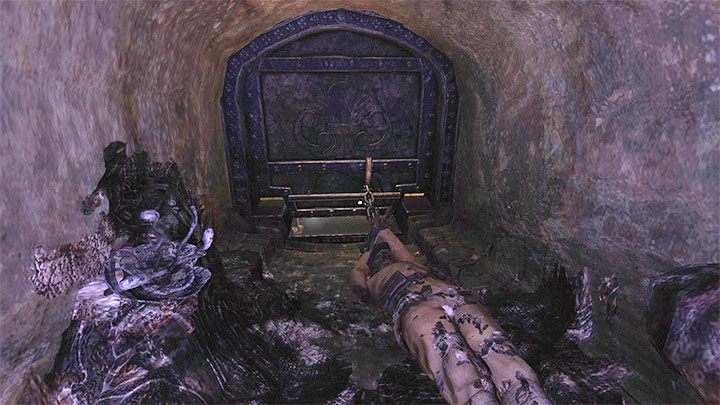 You can go through the open hatch and start squeezing through the tunnels. Stick to the left paths to reach the closed hatch. Interact with the lock to release it. This will enable both hatches to open along with the platforms. 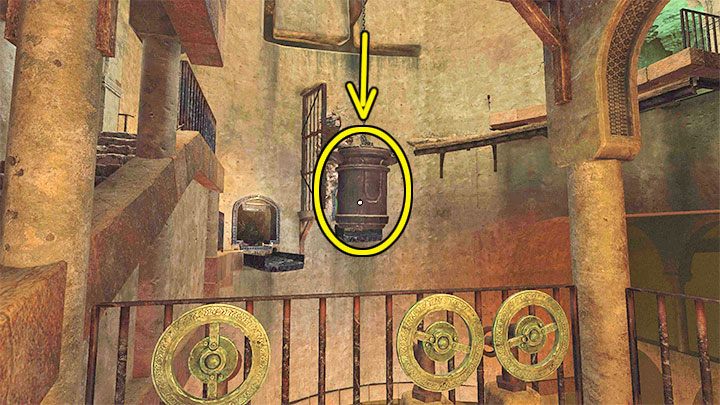 Go back to the three valves and do the following:

The solution of this puzzle is shown in the picture. The hanging object must stop on the right platform. 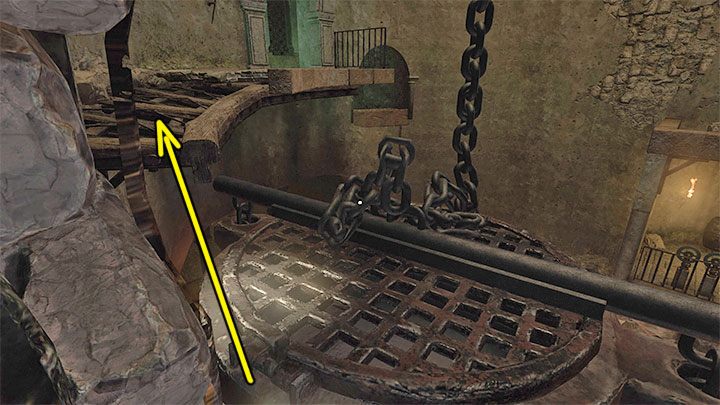 Go to the previously unlocked left hatch and start squeezing through the tunnels again. This time, choose the paths leading to higher levels. The goal is to reach the top of the hanging object (see the picture above) and use it to get to the adjacent upper balconies. This will allow you to complete the valves puzzle and continue your journey.

Getting out of the sewers 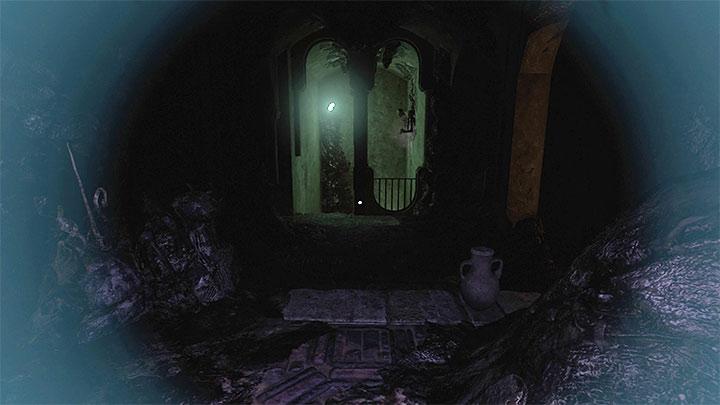 The new path leads to the gate with a wheel - use it and run forward. Explore the room on the left in the new location. In the new area, you can find x3 matches:

After you collect all the items, go to the next area. Expect a new confrontation with the ghoul - keep sneaking and if you are spotted, escape to one of the rooms and wait for the situation to calm down. 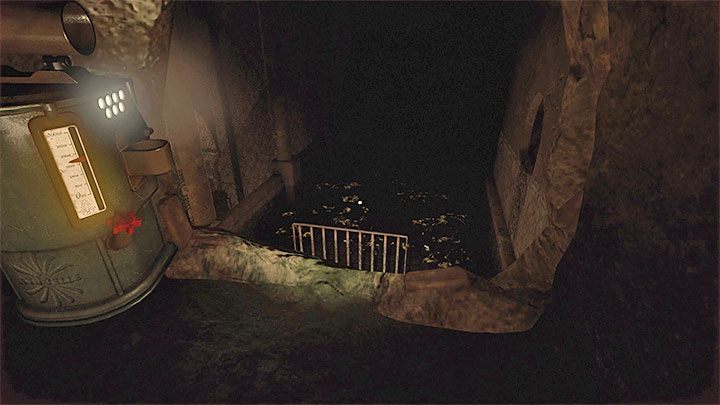 There are several side rooms on the lower level. Their exploration entails a high risk of meeting a ghoul, but you can find matches x3 there:

Ultimately, you have to use the new small tunnel and reach the partially flooded section of the sewers (see the picture above). 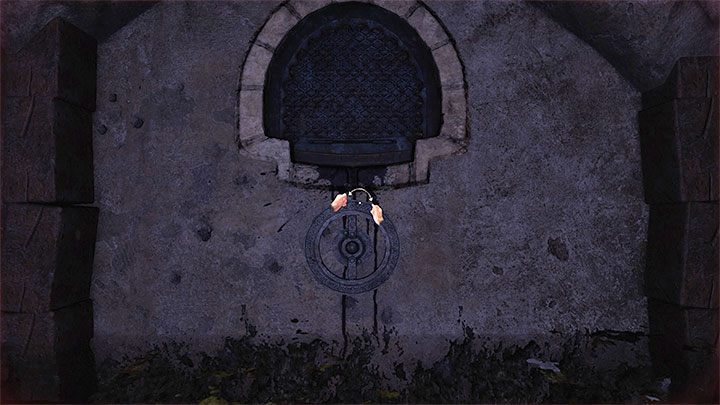 While crossing the flooded canals, you have to crouch to dive and swim to the next places. Remember not to stay underwater for too long so as not to drown. It's also a good idea to save the game in advance, because at the end of this stage, there will be another confrontation with the ghoul.

During the crossing, you will reach the optional valve presented in the picture above. Using it to open the upper hatch is rewarded with the hidden Can-opener trophy. 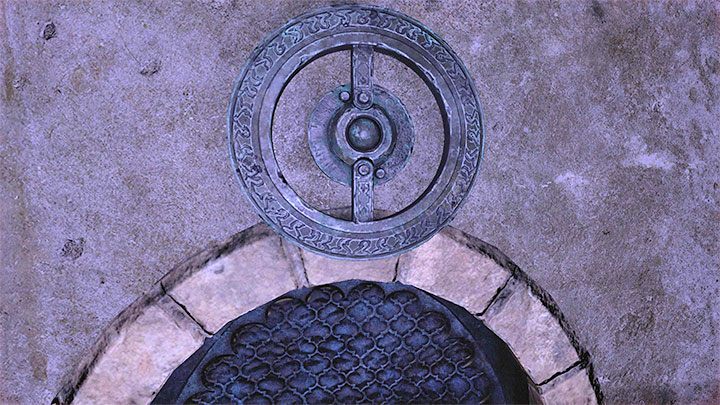 Continue your journey through the sewers. At some point a ghoul will appear and you will have to run away in the opposite direction. Your goal is to reach the wheel shown in the picture, using it to raise the hatch and unlock the sewer exit. 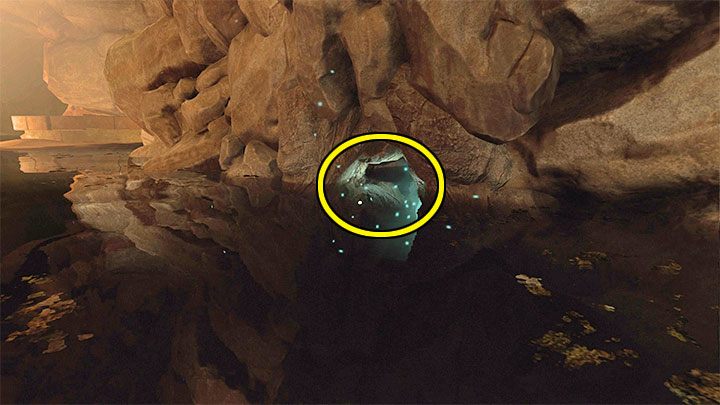 You will find yourself in a large cave. The protagonist is no longer in danger here. Check on the fetus and keep going forward.

A blue figure will appear and give you a hint on what to do now. You have to dive near the hole marked in the picture. While swimming underwater, a new cutscene will play and the next chapter will begin automatically.