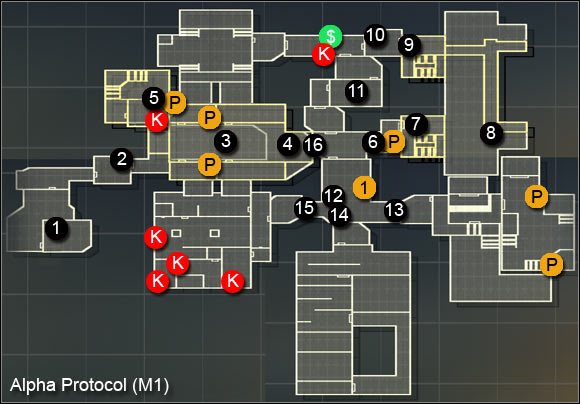 GETTING OUT OF THE CELL: 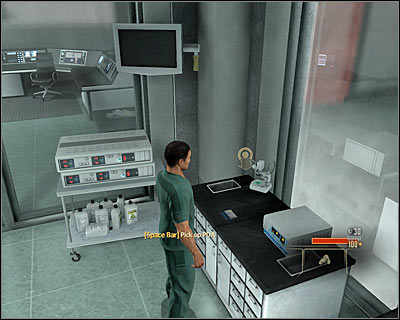 Get out of the bed, get used to the controls and wait for the phone to ring. Approach the (M1, 1) and press SPACE to speak with Mina Tang. During the conversation you will be able to choose how you want to escape from the room. The possibilities have been described below: 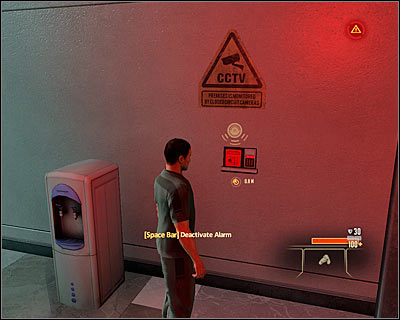 Depending on which option you've chosen, the alarm can be active or will activate upon entering the next room. Approach the control panel on the left wall (M1, 2) and interact with it, which will initiate a mini-game. 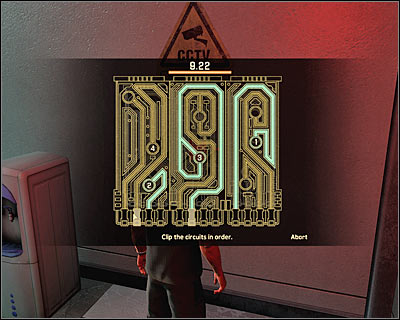 The mini-game is quite easy; you have to clamp the wires in the correct order. Always begin with finding wire number one and then follow the labyrinth to find which lower clamp you should choose. Do the same with the other wires. This time there's four of them, but their numbers will even double further in the game. Of course you have to make it in time and every mistake will cut a portion of the time left. 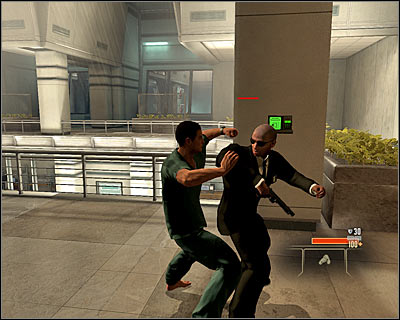 In the other big room (M1, 3) you will bump into two enemies. It would be wise to get rid of them without starting an alarm, as Michael is unarmed at the moment. If the enemies will notice you, they will start an alarm and things will get much harder. You can always switch it off by approaching one of the control panels and completing the mini-game above (more difficult than normally). Begin with neutralising the closer enemy (screen) and then move on his buddy, who's patrolling the further part of the room. 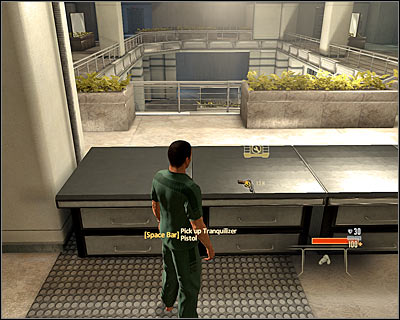 Return to the marked desk (M1, 4) and take the pistol with tranquillizing ammo. You will find two additional ammo packs in the area. Move to the next room in which you will have to neutralize one guard - you can approach him from behind and attack with the pistol. After getting rid of him, take the ammo. 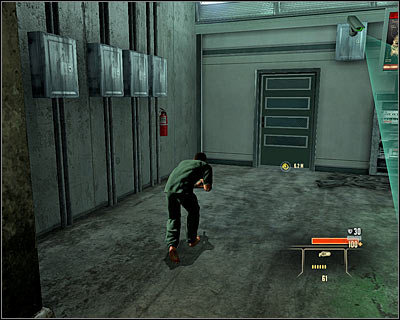 Go down the stairs to the lower level. Look out for the security camera (M1, 5). Wait for it to turn and move round it, while staying close to the left wall. Now you can use the door beneath the camera 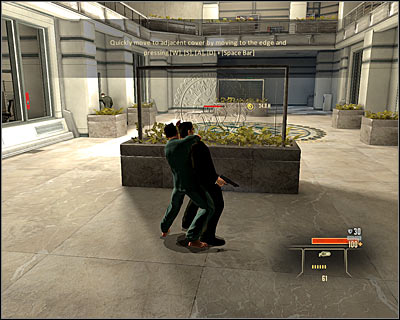 You will return to a familiar room (M1, 3), but now you're at the ground level. Two more guards will appear and it would be wise to get rid of them. Begin with the one patrolling the main room (screen) and then go into one of the rooms on the left in order to neutralize his friend. Use this occasion to look for more ammo. Head towards the marked door (M1, 6). You will have to face a new mini-game type. 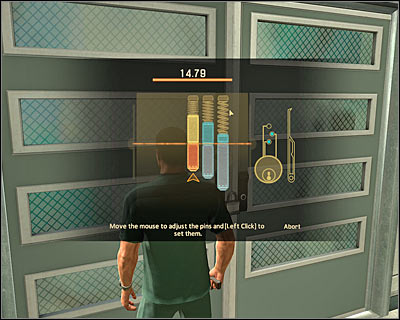 The idea of this mini-game is opening the door. It's pretty easy, even despite the time limit. Move the mouse up and down until each object lights up and then press the left mouse button. Go into the corridor and pick up the ammo on your way. After reaching a bigger room (M1, 7) a short cutscene will start, showing one of the guards getting eliminated. 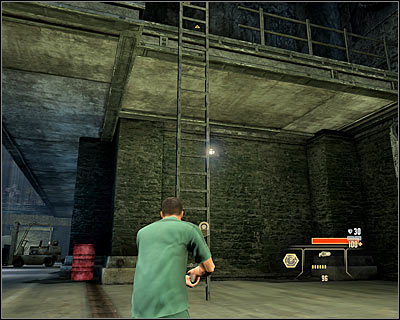 Begin with taking the ammo. Approach the balustrade and eliminate the first enemy with an accurate shot from the pistol. You can eliminate the other enemies as well (for instance by targeting the nearby barrels), but it isn't necessary. After getting down you can use a ladder (M1, 8), thanks to which you will automatically get to the upper balconies. Now you just have to get to the door (M1, 9) leading to the next zone. 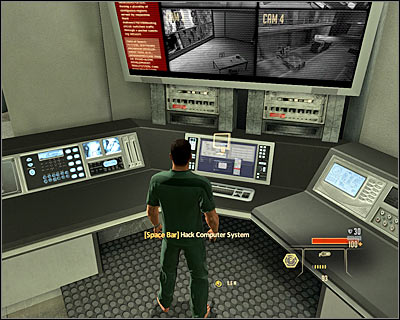 It would be wise to get rid of the guard in this area from a distance, using the pistol. Be sure that his body isn't lying in the area monitored by the camera. Now you have to break into the computer on the right (M1, 10). In order to do that, you will have to complete by far the hardest type on mini-game. 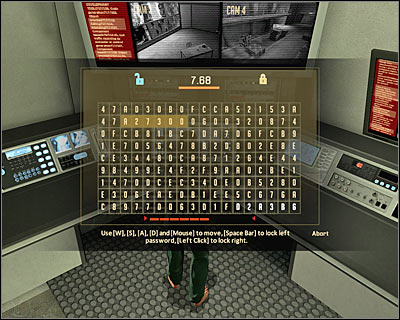 The idea of this mini-game is to fit the two sign sequences into the proper fields. The main difficulty is that each sequence is moved through the main board differently - the left one using the WSAD keys (accept with SPACE) and the right one using the mouse (accept with the left mouse button). Look throughout the main field for places in which the values have stopped and quickly move the proper sequence there. You have to hurry, as the board resets each time the red bar below fills up. Don't worry if you won't make it the first couple times - you will eventually get the hang of it. The possible alarm shouldn't bother you as well, nothing bad can happen to you here. 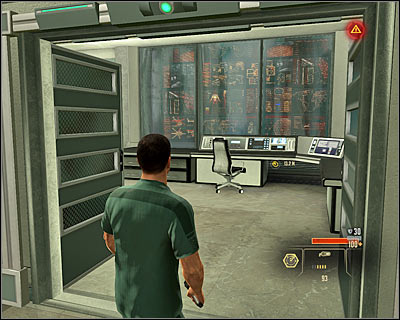 You can take a black suitcase (2500 dollars) from the nearby locker if you want, but you have to wait for the camera to turn or destroy it. Head to the southern room now (M1, 11), where you will speak with the chief of the Alpha Protocol organization - Yancy Westridge. It's the first time you will have the chance to use the special Recruit dialogue option, assuming you're playing with this class of course. Throughout the mission you will be able to choose this option 10 times, for which you will be rewarded with additional point at the end.

GOING TO THE TRAINING SECTOR: 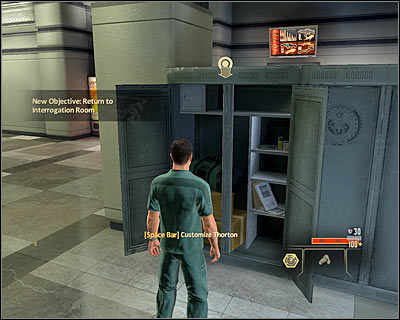 A very easy task. Use the newly unlocked door and head towards the marked room (M1, 12). You can't get lost, as all the other doors are locked. After getting to the goal, use the locker to change your character's looks. Additionally you can turn on the TV and hack into the nearby computer terminal (M1, 1), which will give you access to six messages. Theoretically you can return to Westridge now, but it would be wiser to complete all the side missions for now. 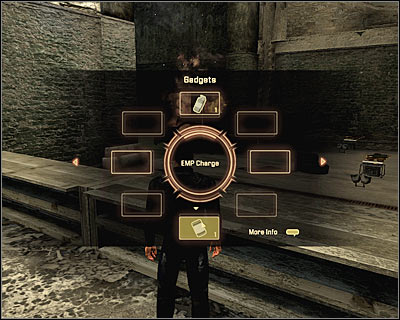 Use the left door to begin the gadgets training (M1, 13). Inside you will meet Sean Darcy. In order to complete this training mission, you will have to:

1) throw some grenades at the marked targets

3) throw a grenade through the upper window

4) throw a grenade under the truck so that it explodes 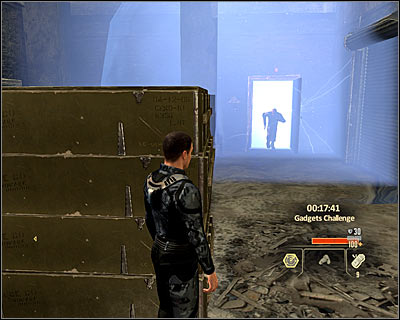 The ending score is affected by the time in which you completed the training (it's worth to complete it again, with less hints from Sean), the damage taken and if the trap eliminated more than one enemy at the same time. 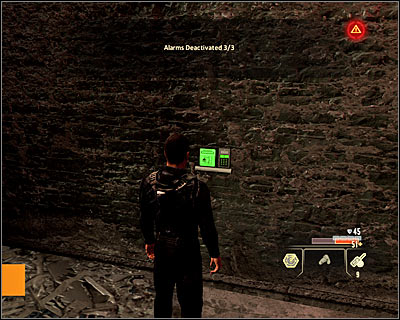 After the training, Sean will offer you a deal. Agree, wait until you're transferred to a new location and hear out the rules of the challenge. You will have to shut down three control panels (the well known mini-game). In the meantime you will be disturbed by enemies, which you can knock out or eliminate in direct combat. Note that you can heal with the medical points on the walls. Additionally you don't have to disarm the panels yourself, you can use the gadgets collected from the locker. In return for completing the task you will receive 20000 dollars. 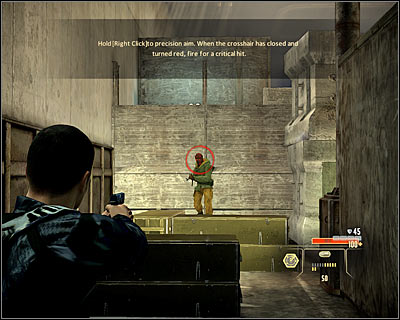 If you intend to go through the weapons training, pass through the middle door (M1, 14). Inside you will meet Mina Tang, with whom you've already talked (call her by her name to improve your relations). In order to complete her lesson, you have to:

1) use the pistol to eliminate some targets

2) hold down the right mouse button and then shoot (screen) 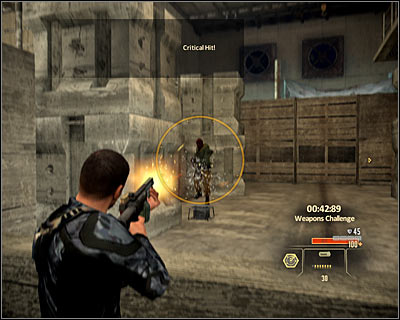 3) use the SMG to eliminate some targets

5) lean out of the cover and eliminate the targets

7) move to the next zone (a new target), take the shotgun and eliminate a couple targets using the aiming system (holding down the right mouse button - screen) 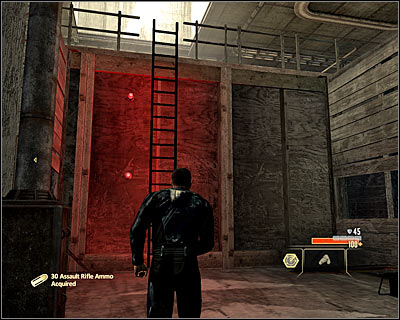 9) move to the next zone, take the rifle and shoot a couple targets (in front of Michael and on the upper construction)

10) use the ladders (screen) in order to return to Mina

The ending score is affected by the time in which you've completed the training (it's worth to complete it again, with less hints from Mina), number of shots, accuracy and critical hits. 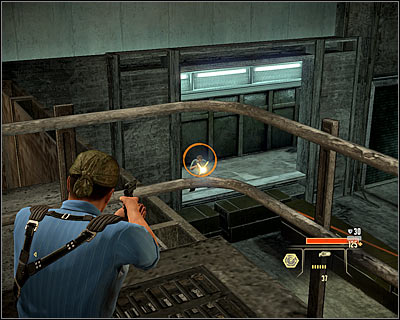 If you manage to gain more than 100 points (missed shots and the bonus for killing two enemies with one shotgun shot have the biggest effect), Mina will offer you an additional challenge, which you should of course accept. You will be moved to the training hall and will have to use the pistol with tranquilizing ammo to get rid of Sean. Go up the ladder, walk till the end and aim at the enemy's head (screen) by holding down the right mouse button. Now you can return to Mina. 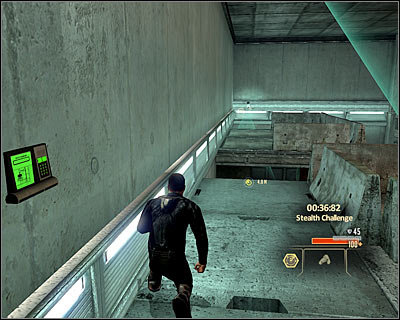 If you want to go through the stealth training (mainly focused on staying hidden), use the right door (M1, 15). Inside you will meet Alan Parker. In order to complete this training, you will have to: 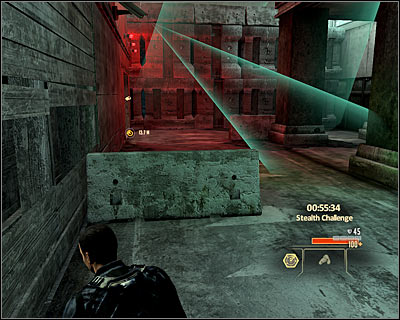 4) lower yourself after the next camera turns right 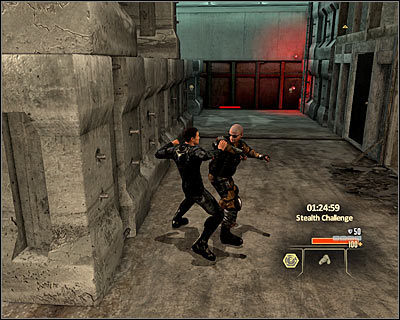 9) silently jump over the barrier

10) place yourself below the camera 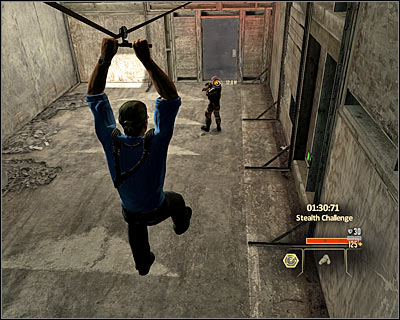 The ending score is affected by the time in which you've completed the training, number of activated alarms, neutralized enemies and if you were noticed. 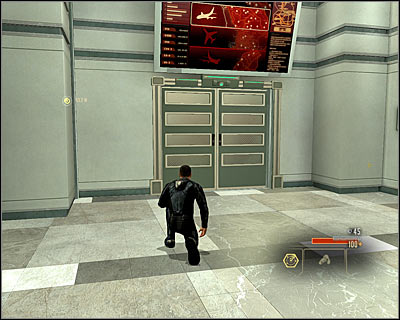 If you suggest that the challenge prepared by Alan was too easy, he will offer you yet another one (accept it). The idea is to silently get back to the place in which you began the game (M1, 1). However for now head through the newly opened door (M1, 16). 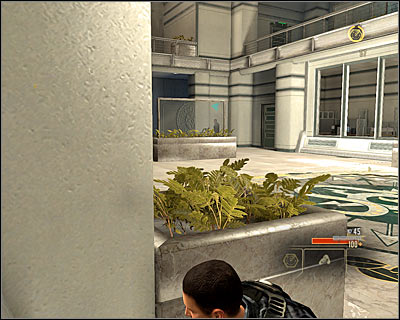 You will find yourself in the well-know room (M1, 3). Move along the left wall, the upper floor is being patrolled by a single enemy. Get rid of the nearby guard (screen) and head towards the passage with the security camera (M1, 5). Carefully head upstairs. Get rid of the enemy mentioned before, preferably while he's near the computer (M1, 4). 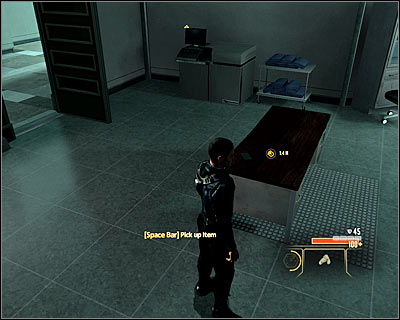 Continue towards the starting point (M1, 1). Look out for the guard in one of the nearby room (M1, 2). Get rid of him in direct combat. Now you can enter the room with the bed (M1, 1) and take the document (screen). 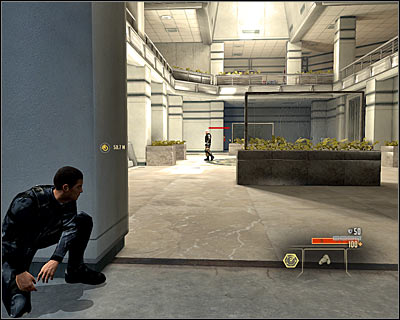 Now you have to return to where Alan Parker is (M1, 15). On your way you have to look out for the camera (M1, 5) and a new enemy which will appear at the ground floor of the main room (M1, 3). In return for the documents, Parker will offer his help in the future missions in Saudi Arabia.

RETURN TO THE INTERROGATION ROOM: 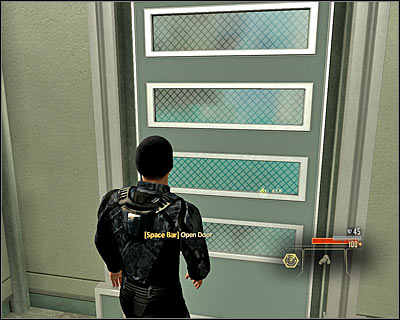 Nothing too complicated here - you just have to return to the room in which you've spoken with Westridge (M1, 11). Two cutscenes will play - the first one explaining the rules of conversations and the second one focusing on your mission in Saudi Arabia.

This site is not associated with and/or endorsed by the SEGA or Obsidian Entertainment. All logos and images are copyrighted by their respective owners.