Once you've gathered enough points, you can go back to the castle. I'm sure that you remember where it is and obviously you can still use a map to find your way. Once you've arrived, read a new text message from Sarah. Your objective here will be to find six hidden signs using your newly acquired abilities. Each time you'll have to close your eyes to know their exact location. Look at my screen - this is the location of the first sign. 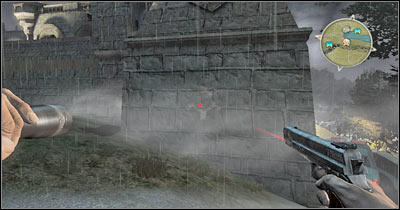 Open your inventory. Choose a lense from room 943 and a flashlight. Press and hold the right mouse button and focus on covering the symbol on the brick wall. You can close your eyes again to see where it is (screen). Once you've succeeded, you will be rewarded with a short cut-scene. You may proceed to the next symbol. 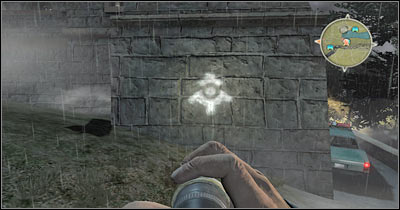 The second sign can be found nearby. Try going to your right. Use the stairs and close your eyes to find it. Be careful, though. You are going to be attacked by a few monsters here (screen). I would recommend using a spray or fire bullets to kill them, especially since you can now find their weak spots. You could also go back to the fireplace and light a wooden object on fire. Either way, find and mark the second sign. 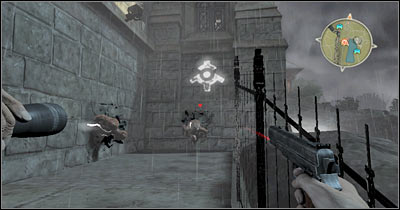 You may get closer to the entrance to the castle, however remain on the outside for the time being. The third sign can be found to the left of the main door (screen). Remember to close your eyes for at least two seconds, so it vanish so soon and you'll have more time to use the lense. 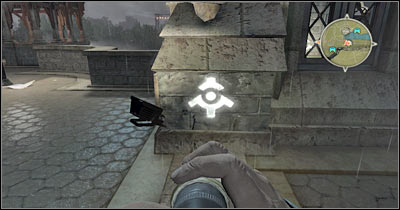 The fourth sign can be found near the flames (screen). This is where you fought the fissure monster. Look at my screen if you're having some difficulties finding it on your own. Mark this sign and proceed to the castle. 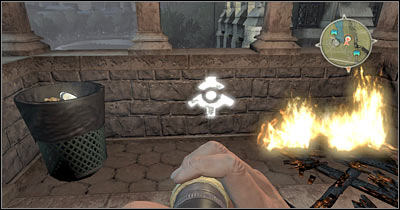 Start off by going left, HOWEVER don't enter this new room just yet. As you've probably noticed, a black mass is inside this room. This means you'll have to make some preparations. Thankfully, you should be able to come across a few flares. Try throwing them across the entire room. The sign can be found on the right wall (screen). As for means of escape - you can go back the same way you came before or you may use an opened window if your don't want to risk too much. 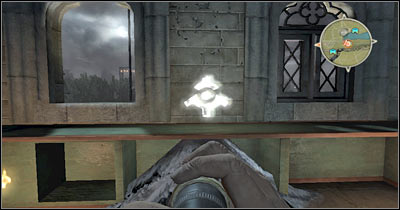 The final sixth sign can be found inside the main room of the castle. Start off by using your gun and destroy a large painting near the fireplace (screen). You can finally mark the sign. Once this is done, watch a longer cut-scene. 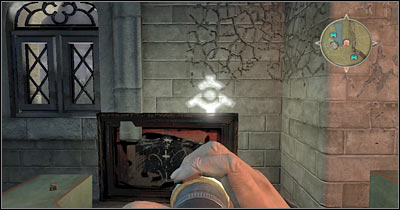 The area shown on the picture is one of castle's towers. You can get there by going outside and finding a rope (screen), however I would recommend reloading the checkpoint, so you won't have to spend too much time trying to get to an upper level. Make sure that you have at least two explosive bottles in your inventory! 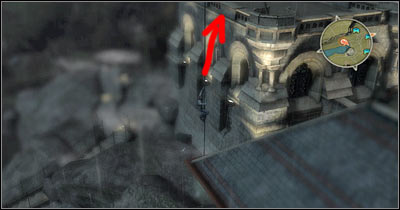 You should end up standing on a small roof. Watch a new cut-scene here. As you've noticed, you will have to defeat a quite powerful creature (screen). It's very important that you have explosive bottles at your disposal, because otherwise you would have some major problems winning this fight. 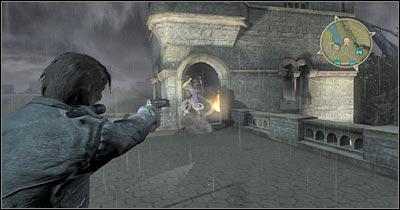 Enter a new area of the castle and take your time to collect the items of the highest value. It's very important that you pick up a fire extinguisher (screen). Use this object to put out the flames. This will grant you access to the staircase. Proceed to the top of the tower. Stand on a plate with six highlighted signs and you're going to be transported to the final area. 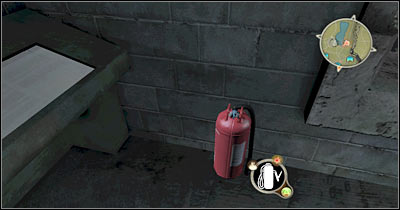 You should be able to receive a new text message from Sarah in the meantime. Once you're at the top, approach a large telescope and use it. All you have to do here is to center the view on the moon (screen). Notice that a distant building has been highlighted. Prepare yourself for the final chapter of the game! 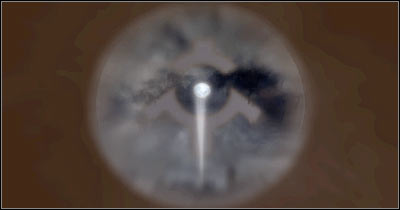