As you've probably suspected, you will have to defeat your first boss. It's going to be a large nest built out of flying creatures. It's extremely important that you act quickly, so you'll have more time to prepare before you're attacked. Hide near Sarah or on the opposite side. You can't stay in the open, because the large creature will throw large objects at you. Clear out your inventory (screen) by dropping medical sprays. I would recommend that you free up at least two slots. 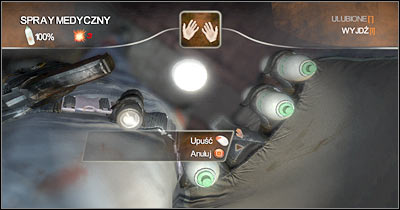 Now you'll have to focus on finding and picking up explosive bottles. Choose one of these objects from your inventory (screen). As for your other hand, choose a pistol. You will have to do all of this quickly, because winged creatures may have appeared in this area in the meantime and they'll start attacking you. 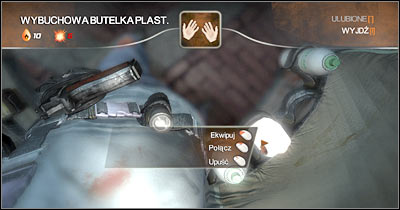 Ignore the flying beasts entirely and start moving towards the big nest. Once you're close enough to the exposed organs, press and hold the right mouse button. Edward should automatically use the bottle. Aim this object at the organs (screen). Throw the bottle and destroy it at the last second with pistol. Notice that if you keep holding the right mouse button, all events will occur in slow-motion. It should make your life a lot easier. 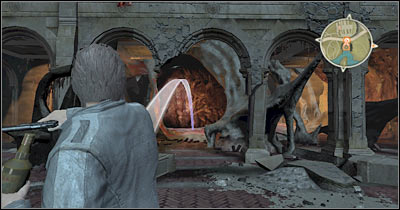 If you've done everything according to the plan, you were able to wound the beast. Obviously the monster is mad at you and it will retaliate by throwing huge objects at you. Avoid them at all costs and choose a new bottle from your inventory. Repeat all actions. You will have to throw 4-5 bottles at the monster before you'll succeed (screen). 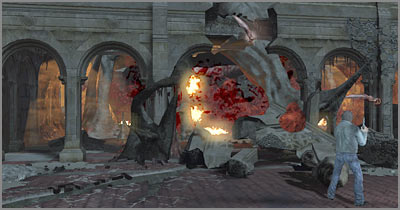 Once you've defeated the monster, go back to the burning cars and recollect medical sprays which you've ditched before. You will also find ammo here, amongst other interesting objects. Join Sarah (screen) and start moving through a new corridor. You will be rewarded with a much longer cut-scene in a short while. 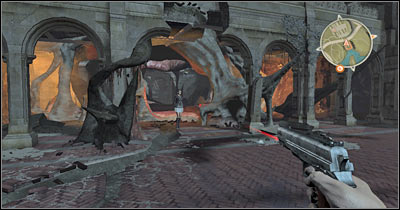 Start off by using your cell phone. Open your personal map and notice that a new location has been added to your map. You will have to go the museum (2 on the map). You should notice that new roots of evil have appeared on the map, however exploring these areas is optional. You can reach the museum any way you want to, however I would recommend following the path from the screen. 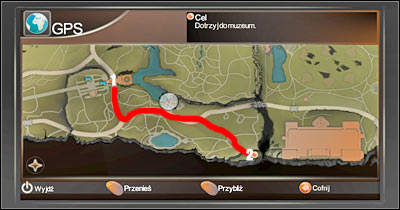 This time you'll be using a pick-up truck to reach your destination. Obviously you should start off by examining the car, especially the side compartment. Start the engine and go to your left. I'd strongly recommend that you remain on the main road as long as possible. Avoid some of the mutants and maintain maximum speed to prevent them from jumping over to the roof of your car. You will have to leave the main road once you're closer to the museum (screen). 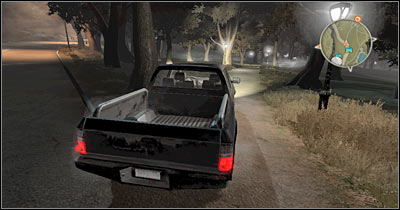 You'll be moving south-east. I'm sure that you'll be fine without having to look at your map every 30 seconds. You will encounter more mutants along the way. Run them over or ignore them entirely. You'll have to perform a simple jump near the end (screen). Here's where you'll be rewarded with a short cut-scene. 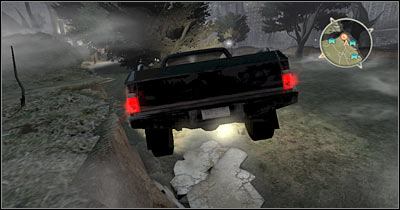