Obviously you will start the game exactly where you left off. Keep moving forward. Ignore the fissure on the left wall, because you won't have to fight this monster. Make a sharp right turn. You should come across several creatures along the way. It's best to avoid them, so you won't take part in any unnecessary accidents. Also, you won't return here later on, so you won't have to worry about securing the parking lot. Avoid two wrecks (screen) and head on to the upper level of the parking lot. 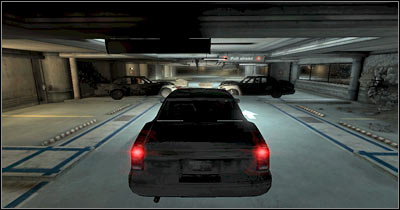 You shouldn't have any problems avoiding larger obstacles. Increase your speed and get ready to perform a tricky jump (screen). The most important thing here is that you're moving in a straight line. Watch out for other wrecks and make a second sharp turn. Keep heading towards the flames. You'll crash your car there, however there's nothing you should be worried about, because this was all a part of the plan. 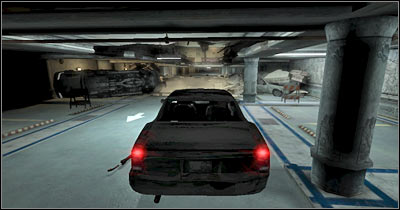 Ignore your new friends. You won't have to worry about them, because they'll exit the car and find a good cover on their own. Focus on exploring the surrounding area. The most important thing here is that you find a lighter (screen). Drop some of the less useful items from the left side of your inventory if you don't have any free slots for the lighter. 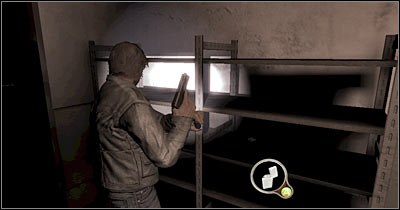 Choose the lighter from your inventory right away. Go back to the car you've wrecked a few minutes ago. Locate a pool of gasoline and press the action key (screen). Obviously you will have to move back, because there's going to be a huge explosion. Notice that you're allowed to explore a new area of the parking lot. 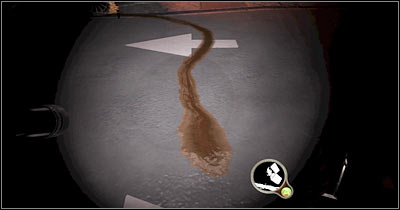 It's very dark in here, so obviously you should be using a flashlight all the time. On the other hand, you won't encounter any monsters, so drawing your gun isn't necessary. Keep heading forward. You will come across several vehicles along the way. I would recommend exploring them from the inside, especially the side compartments (screen). You could also ignore all of this and focus only on finding a new car for you and your friends. 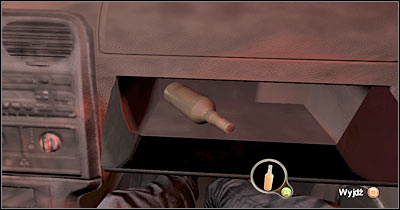 You should be able to find a body of a dead police officer. Inspect the surroundings and you'll find some ammo. Proceed to the other end of the tunnel. Pick up one of the chairs and light this object on fire (screen). 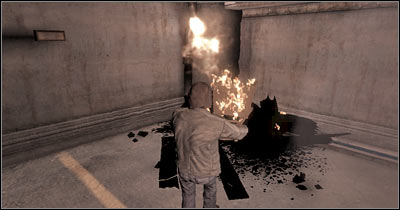 Once you've acquired a burning chair, proceed to your right. Wooden planks are blocking your way and you'll have to light them on fire as well (screen). Once this is done, you'll receive a warning that a fissure monster is heading your way. You could try and fight it, however it's optional. I would recommend that you start running to your left. Don't stop at nothing and eventually this chase sequence is going to end. If you get caught, you'll have to try and free yourself by pressing certain movement and action keys (instructions will appear on your screen). 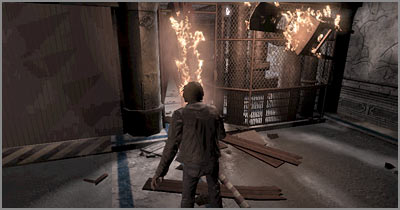 As you've probably noticed, the flames have disappeared and you may inspect a new area of the underground parking lot. Ignore the car for the time being and check your surroundings very carefully. You will find TWO medical sprays here and it's extremely important that you take them. The first spray is next to the cab and the second one can be found in the corner of the room (screen). Heal yourself if you have to. 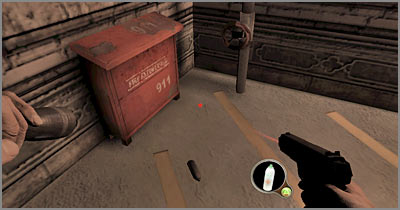 You may finally proceed to the cab. Take a seat in the front and wait for your colleagues to get here. Thankfully, you won't have to search for the key, because it's already in the ignition. Start the car. Move back a little and destroy the gate in front of you by slamming it. Turn right and dispose of the second gate (screen) which can be found next to a dead policeman. Keep heading towards the exit. 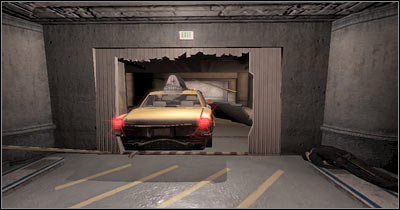