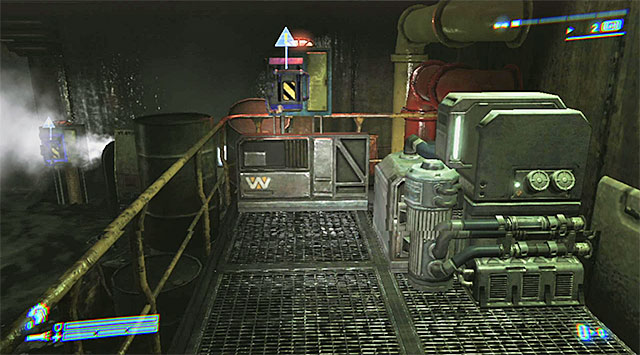 After leaving the vent shaft, make your way to the near passage. There are two levers to pull. Start off with the one that shuts down the pump in the sewers (the above screenshot), then go the one that opens the gate. Move forward, listening to a conversation with O'Neal in the meantime. 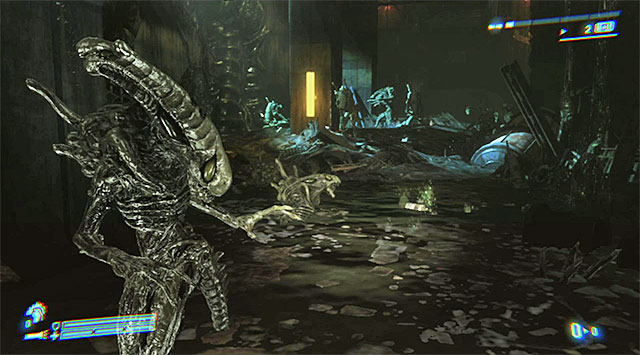 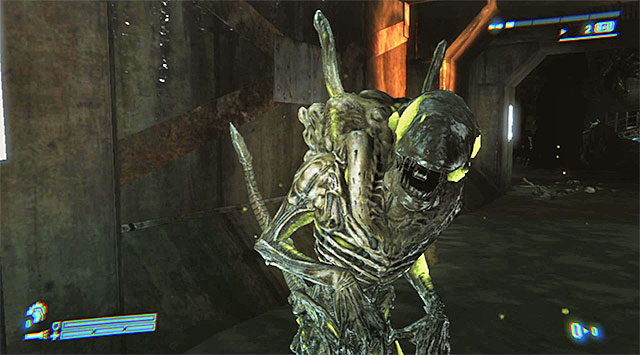 Here's where you'll run into a new variety of aliens, as seen on screenshot 1. They're called Boilers and their most distinctive feature is that they locate their potential victims only by the sense of hearing. You need to walk very slowly when you move around them, and if you alert them, stop altogether for a while. Don't worry if the alien gets too close to you (screenshot 2); as long as you don't make any sudden moves (you can turn around at will), you won't be harmed in any way. 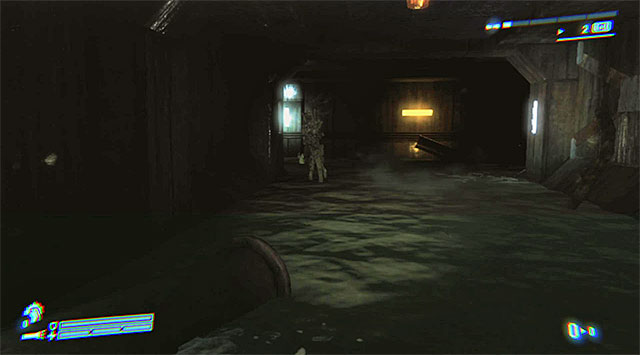 Don't try to outrun the "dormant" aliens, because they can move very fast, exploding on contact, which may lead to a serious loss of health or armor points. Just keep moving, very slowly, and keep your finger on the pulse, checking whether the nearby aliens are active or not. Take the tunnel leading to the further parts of the sewers (the above screenshot). 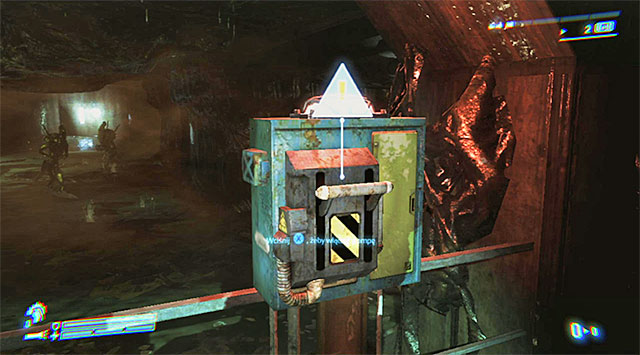 Soon after going through another checkpoint you'll find yourself in the section occupied by new dormant aliens. Theoretically, you could try and walk past them, keeping an eye on them all the time, but it's better to just get rid of them for good. To do it, move forward, but get on the small balcony on the right the first chance you have. Pull the lever (the above screenshot) to power up a nearby pump. As a result, each Xenomorph will run towards it and explode on contact with it. 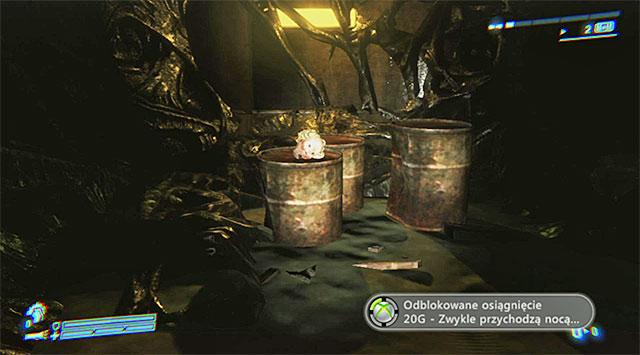 You're free to move forward without worrying about evading anything for the moment. I suggest searching every corridor; one of them hides a bonus item, Newt's doll, pictured above (it also involves unlocking a Trophy/Achievement). Move forward and stop when you get to the new area with aliens. 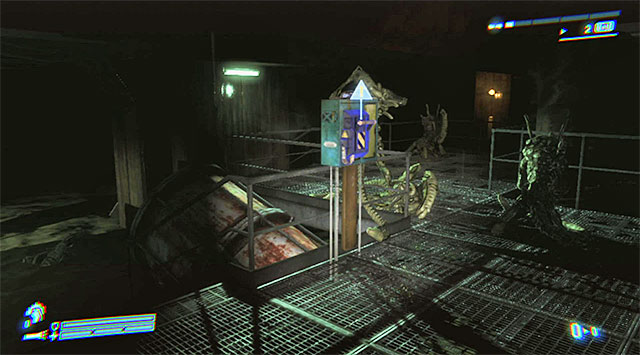 Get on the metal gallery and start walking very slowly. The task here is practically the same: find and pull an interactive lever to encourage the aliens to commit suicide at the activated pump. 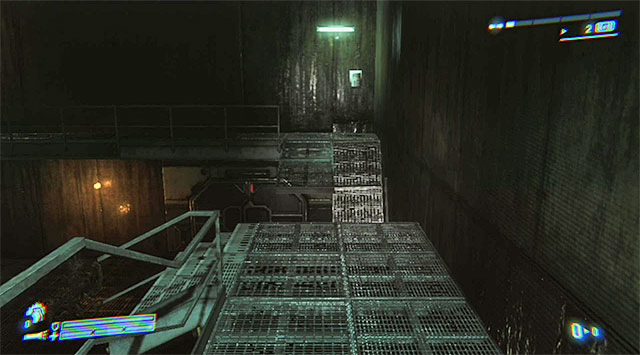 Find a door and use the welding torch to open it (without worrying about the noise). In the new area, approach the destroyed metal platform (the above screenshot). Jump to the adjacent one and quickly reach and pull another lever. Wait until the ground floor is "cleared" of aliens. 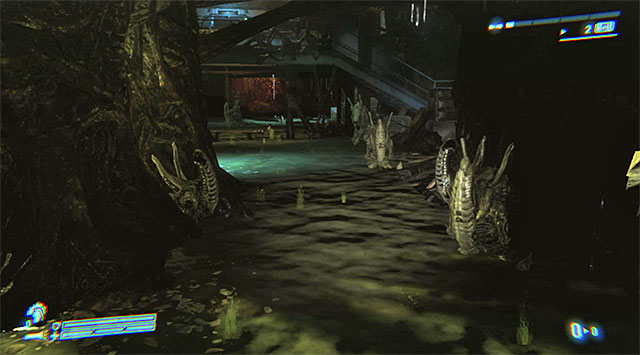 Jump down and use the welding torch again. Listen to a fruitless conversation with O'Neal and take the left tunnel. Stop when you reach the above area; there's quite a large pack of dormant aliens there. 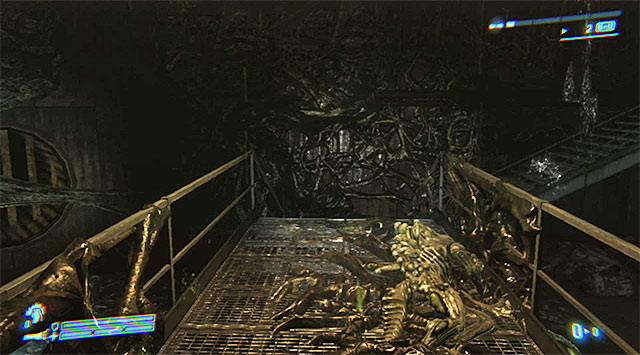 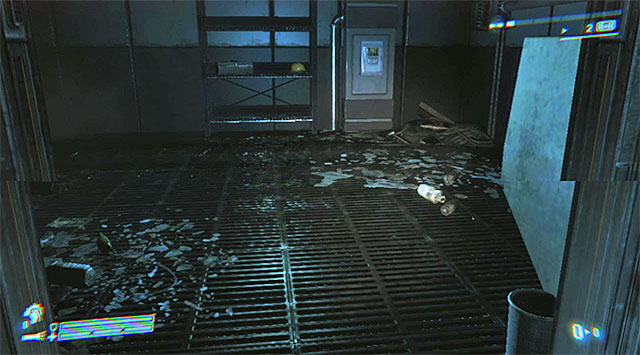 Carefully, make your way ahead, stopping every time you detect any activity from the aliens. Take the ramp to the metal platform. You have to options now: continue walking along the upper platform (screenshot 1) or wait for the left door to open and enter the side room (screenshot 2). In both cases make sure not to accelerate even after moving away from the Xenos, because you can still alert them to your presence. 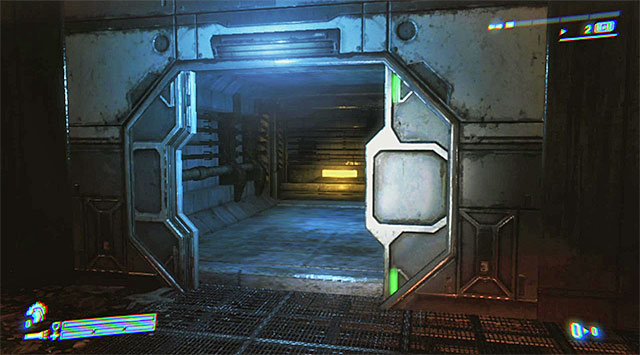 Both ways lead to the same place, the above passageway. Use it and turn right. Use the welding torch at the end of the corridor and you'll receive an update on your objectives.