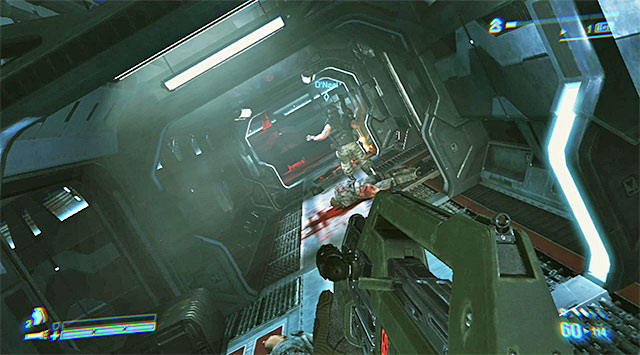 The first part of this mission is linear and you won't encounter any enemies. Follow your teammates as they go through partly destroyed areas of the bridge. Keep in mind that despite the ship being torn apart, you don't have to escape in a hurry. You're also safe in the corridors with lightly depressurized doors; they will try to suck you in only with marginal force. 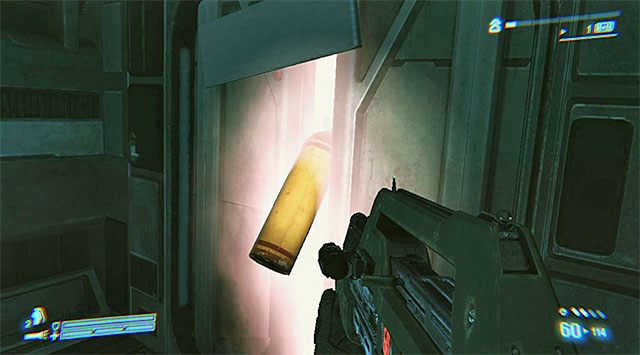 When you reach the screening room from the previous mission, turn right and go upstairs. In the nearby corridor fire at the yellow canister to fully close the door and let you continue onwards. 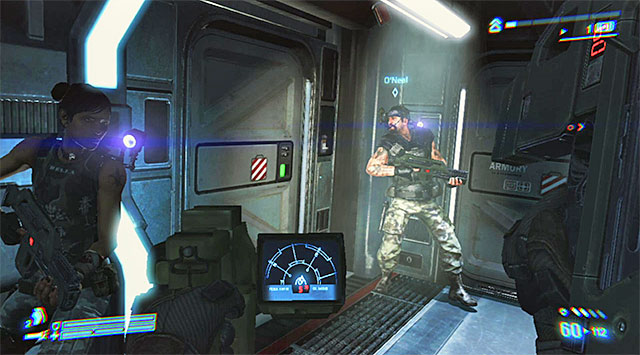 Follow the linear corridors, using the stairs on the way. When you reach the spot pictured above, start off by examining the right door that lead to the armory. Inside there is a bonus weapon, M240 Incinerator Unit. I don't recommend taking it, though, as it won't be especially useful in the coming battles, and you can't add it to your inventory (when you try switching weapons, the flamethrower is automatically discarded). 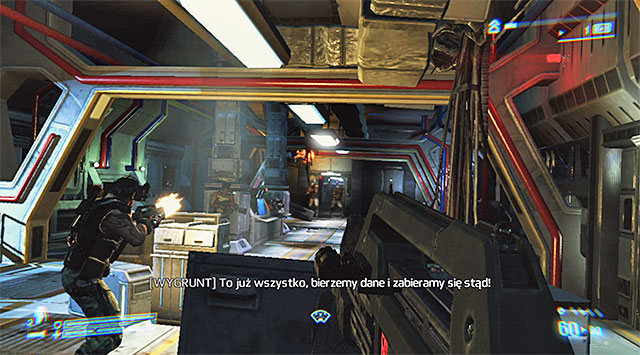 When you're done checking out the area, go through the left door and get ready for the first battle with the Weyland-Yutani mercenaries. Use covers as often as you can, as well as explosives and the yellow tanks. Watch out for enemies that will show up at the door at the end of the corridor. One precisely aimed explosive round should take care of them in an instant. Before leaving, examine the closest area, including two smaller corridors on the right. 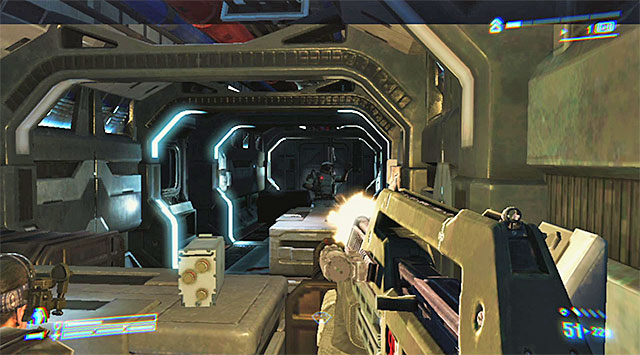 Proceed forward to reach a new door. Open it and attack the enemies visible ahead (the above screenshot). As soon as one of your teammates stops using the welding torch, go left to enter another large corridor. Same as before, hide behind covers, looking for opportunities to attack effectively and safely. 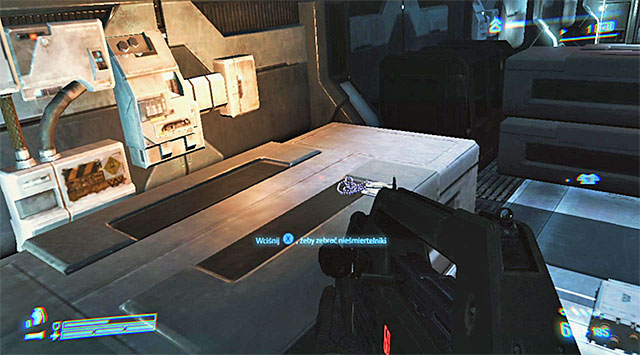 Keep moving forward, eliminating whoever comes your way. After securing the main corridor, choose one of two passages on the right. There will be some new enemies to take down here. Afterwards, go right to find yourself on the other side of the barricade. Pick up another Dog Tag, as seen on the screenshot (PFC Ricco Frost). 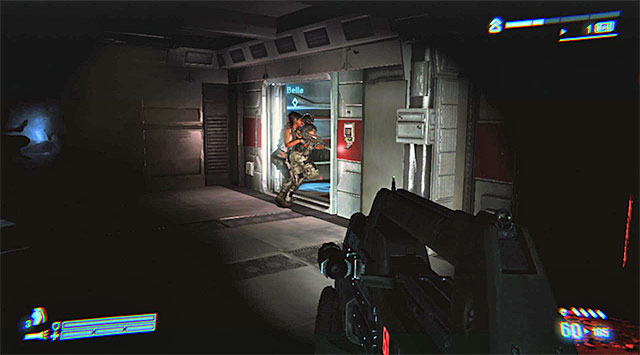 Continue exploring the deck. You shouldn't run into any new enemies, so pay more attention to picking up collectibles you find on the way. Your current destination is the elevator illustrated above. Use the control panel take a thrilling ride to another deck. 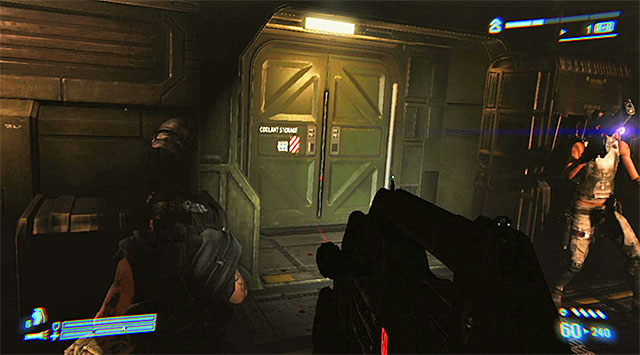 Check the other elevator for supplies, then go towards the left door. Resume your very linear march, stopping only after reaching the door shown above. Look around for collectibles again and use the welding torch when you're ready. 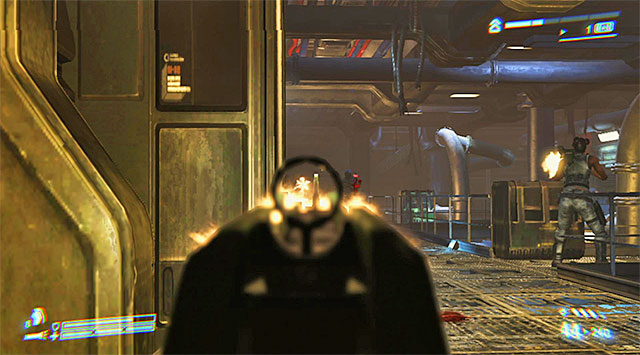 Get ready, because as soon as you open the door you'll be forced to take down some new mercenaries. What makes it easier this time is that they'll be busy attacking Xenomorphs, so you can surprise them. At the beginning, I suggest staying close to the door and moving forward only after eliminating the closest enemies. Same as with the previous battles, use the explosive canisters to decimate the enemy's ranks more quickly. 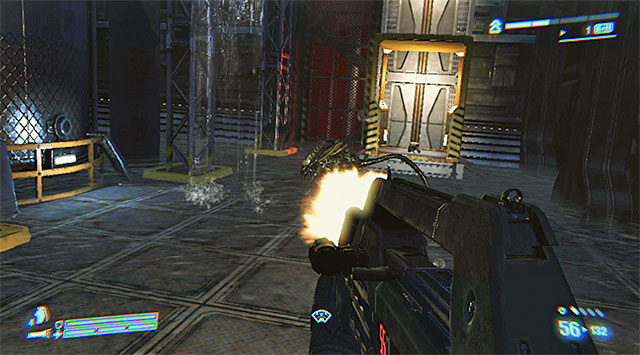 Whether you choose the left or the right galleries, at one point you'll lose the ground under your feet and land on the bottom level. Exterminate two Xenomorphs there. To get back up the galleries, use the elevator in one of the corners. Resume the march until you reach the exit. 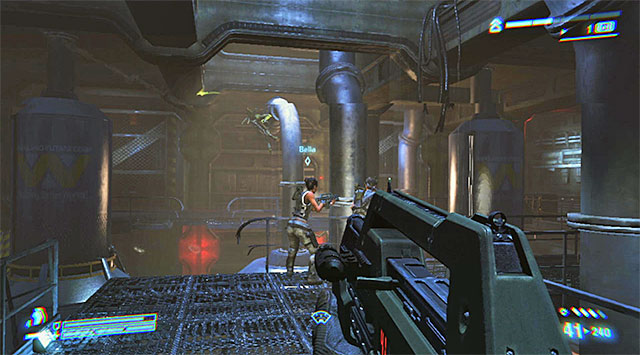 In another room with metal galleries, watch out both for mercenaries and Xenomorphs. Enemies will come at you from the left in several waves, so this time don't leave your cover after killing all visible targets. Be on alert as you may fall down to the bottom again, though this time you wouldn't have to worry about being attacked by Xenos. Reach the passage where your teammates are waiting. You'll receive an update on your objectives in the next room.