We are proud the present a game guide for Alan Wake, a game made by Remedy Entertainment, the creators of Max Payne series. The article consists of general tips about the rules of the game, complete walkthrough of all six episodes and also a list of weapons, equipment and enemies present in Alan Wake's world.

For everyone willing to learn about the plot as much as possible, we prepared a section called "Manuscript", which consists of a list of all pages from the manuscript (including the ones available on the highest difficulty level) along with tips on finding them.

We believe this game guide will be extremely helpful particularly for those gamers, who just started playing action games, therefore it works with the lower difficulty levels. Detail-oriented descriptions, numerous tips, suggestions and lots of images will surely help in understanding the game and finding a way out of any troublesome situations you may face in Alan Wake. 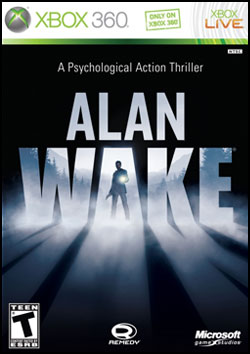 Alan Wake is a psychological action thriller, a unique new take in the world of gaming. The game is set in an idyllic all-American small town and its surroundings in the state of Washington. Alan Wake, the game's protagonist, is a bestselling horror writer, who writes a novel about his darkest nightmares. In the game, those nightmares come true. As with Remedy's previous games, story and atmosphere are fundamental elements.

The game features a massive, open world for the players to explore. The game design is mission based with the player as the driving force behing the action, and as with their previous games, Remedy again focuses completely on delivering the best possible single player experience.

The use of light is a significant gameplay element. Remedy has developed proprietary new technology to support the gameplay of the title and to push the high definition visuals to the next level. This site is not associated with and/or endorsed by the Microsoft Game Studios or Remedy Entertainment. All logos and images are copyrighted by their respective owners.